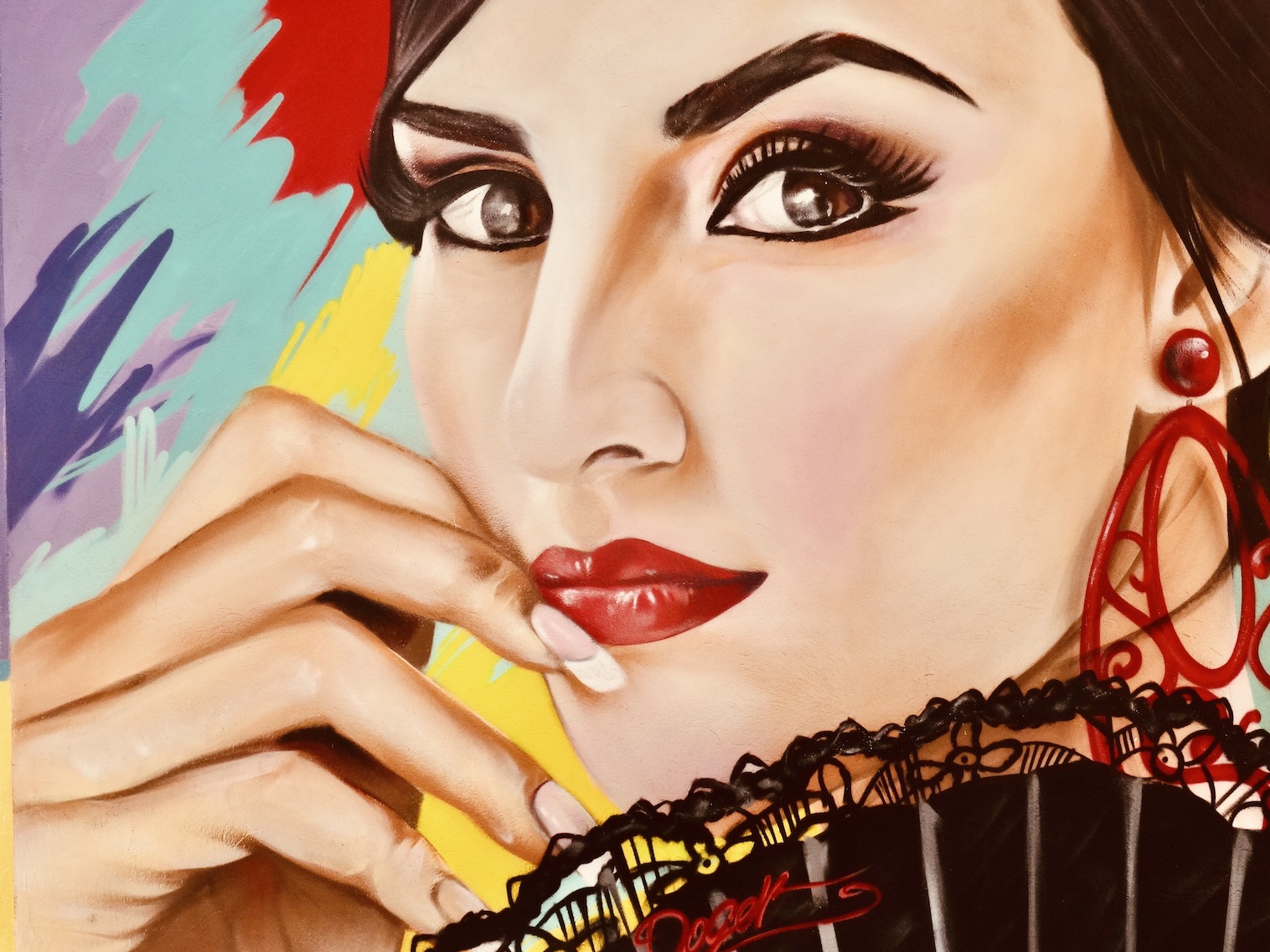 2016-2017. I’ve always been a lover of urban street art. No matter what city I find myself in, I try to get at least a few shots of the most colourful and arresting murals. After my trip to Berlin (a fantastic street art city!) in April 2013, I thought how cool it would be to do a series of street art reports from around the world.

Sadly, I lacked the discipline to get the project off the ground. Eventually, in 2016, I found myself so in awe of Malaga’s street art that I pushed myself to spend a day mural hunting. 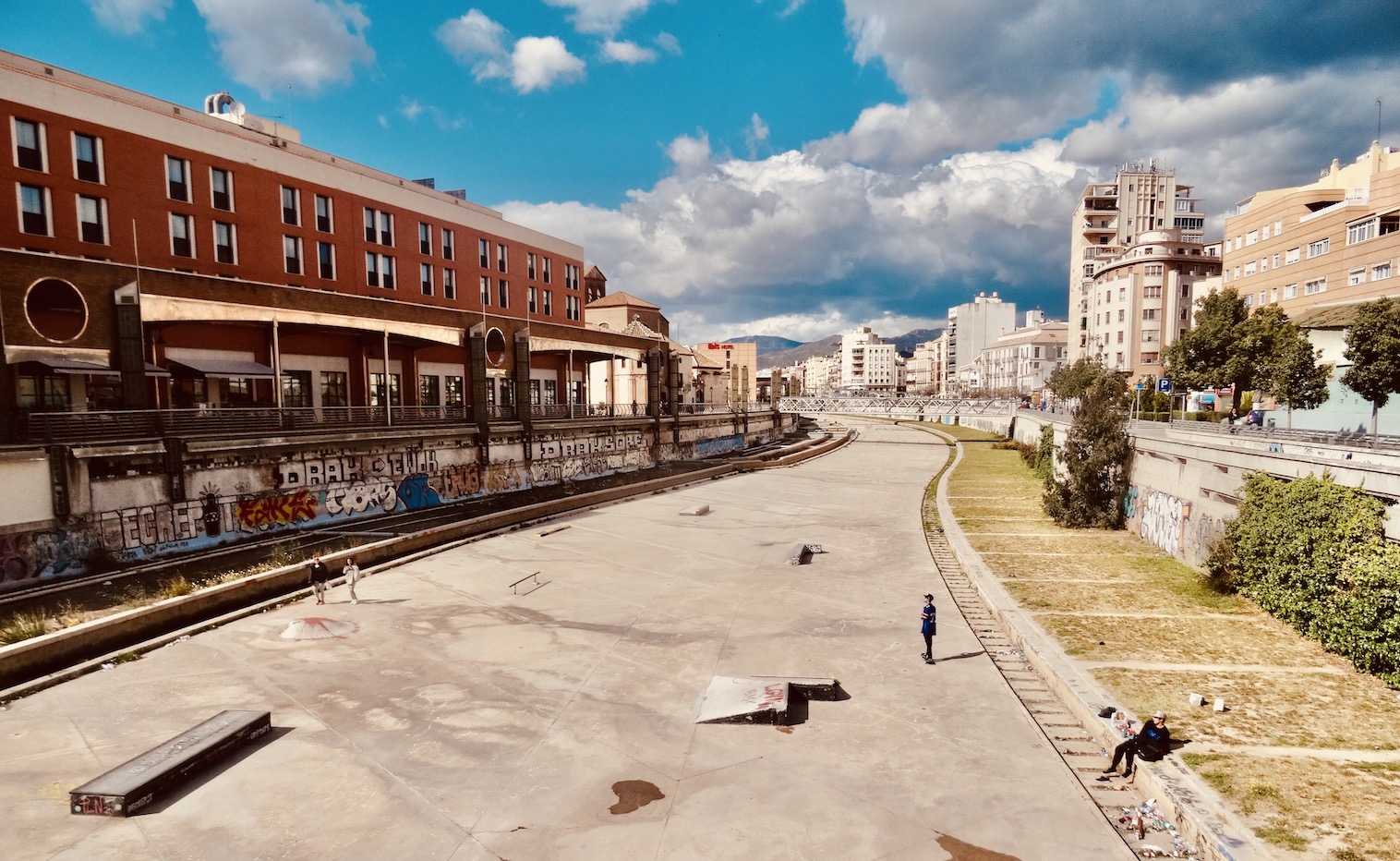 My first stop was one of Malaga’s most neglected spots, the dried up stone wasteland of the Guadelmedina River. At first glance it’s a bit of an eyesore, with broken beer bottles, dead birds, unsightly graffiti and groups of smoking, hoodie-wearing teens glaring at outsiders with distrustful eyes. 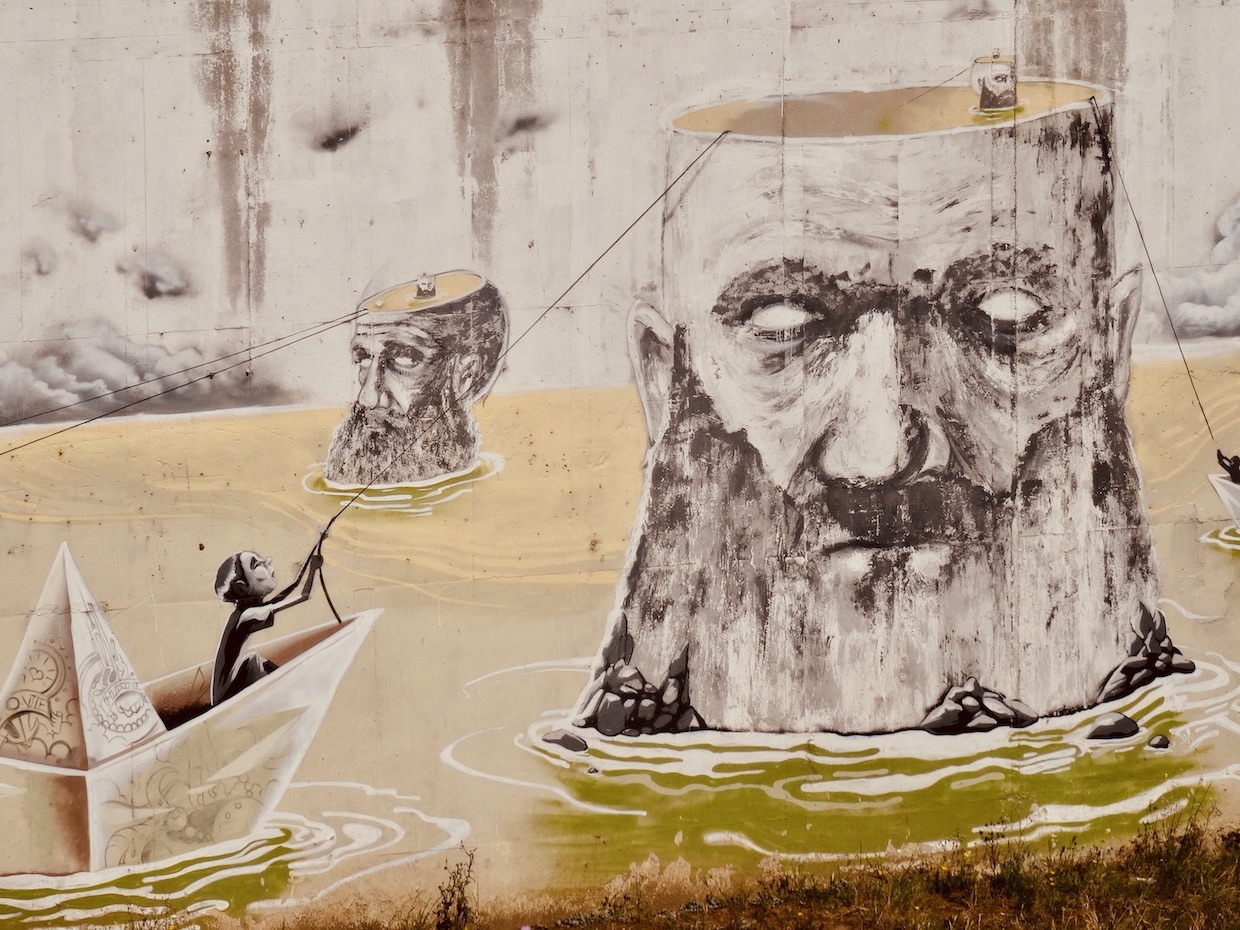 However, take the steps down into the riverbed and you’ll find some amazing art. One of the first pieces I found was this untitled creation by Dadi Dreucol, a Malaga born painter and photographer. Having studied at The Malaga School of Fine Arts, he has since spent years painting the city walls with his distinctive images.

Nearly all his work features the same bearded, half naked dude. According to the artist himself, the man is semi autobiographical and exists free from the rules of society. Moreover, his images deal loosely with themes of sanity and the environment. 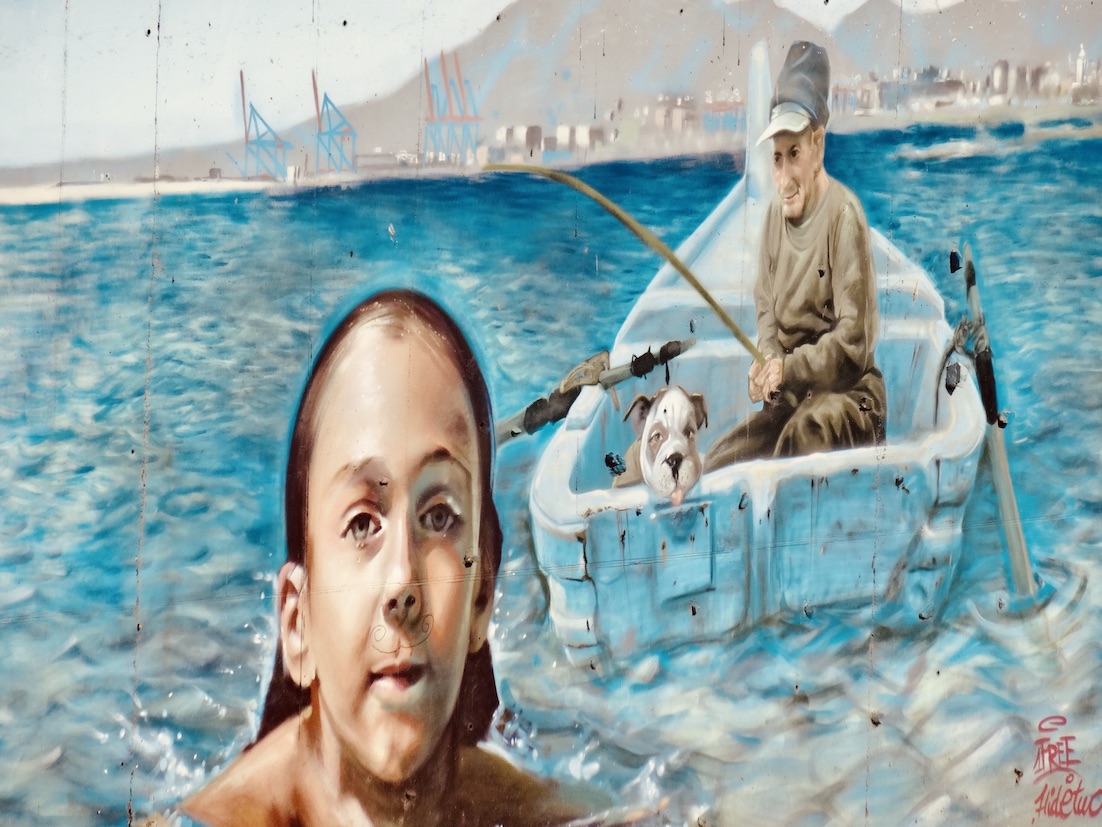 The riverbed mural project was started by Maus, a social project that works with local residents and artists from all over the world. Their aim is to transform run down urban areas through art and leave a cultural legacy that affects residents’ day to day lives. 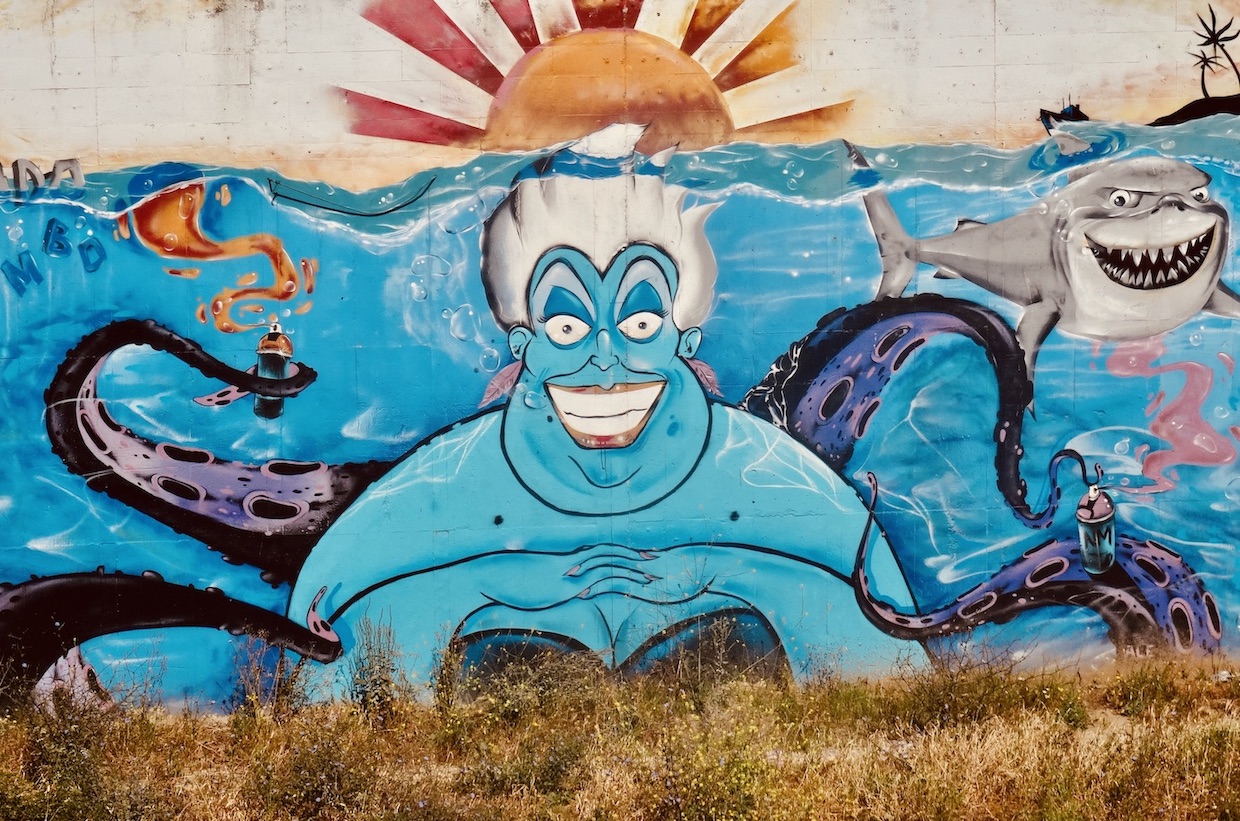 “Those poor unfortunate souls!!! So sad, so true. They come flocking to my cauldron”.

I liked how most of the riverbed murals deal with water themes, providing some much needed flowing imagery to compensate for all that dry stone.

It was particularly fun to see a large painting of the villainous Ursula from The Little Mermaid, a Disney flick my sister and I used to devour as kids. 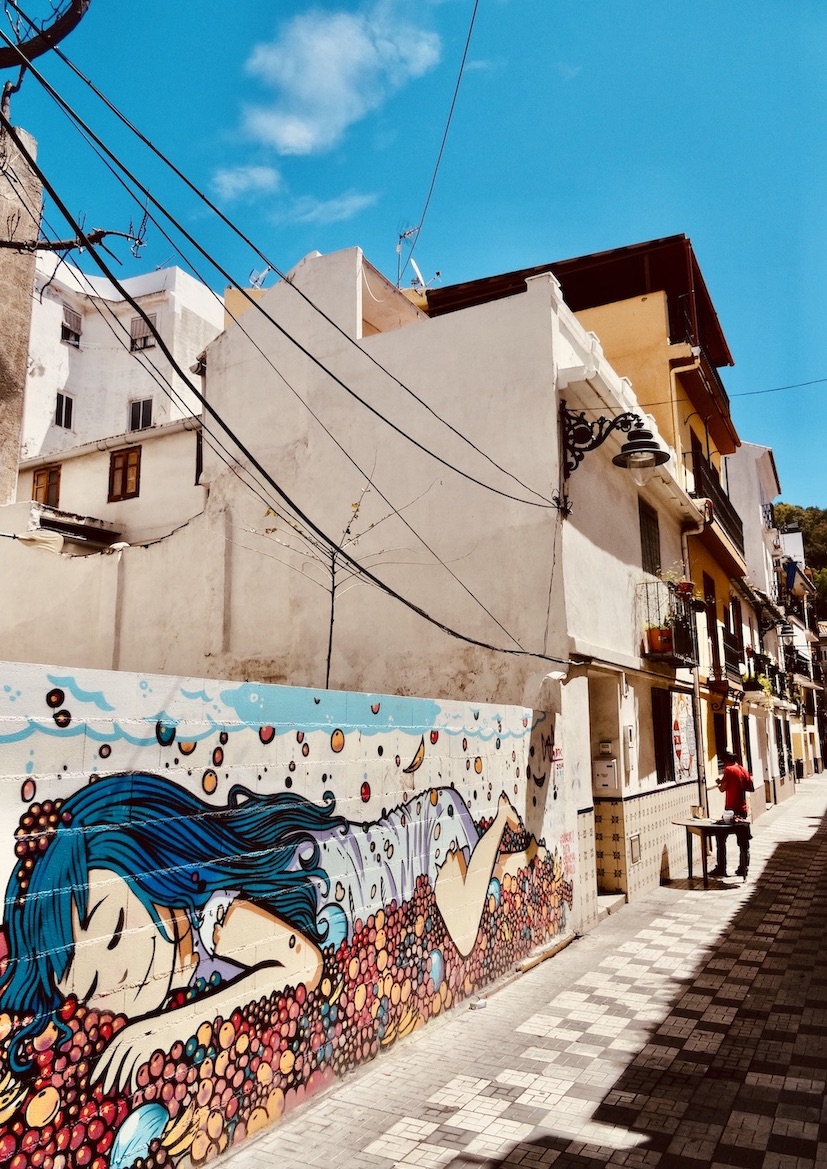 The city’s largest concentration of street art has sprung up in its most troubled neighbourhood, Lagunillas. Situated northeast of the historical centre, the district fell into a state of disrepair and social degradation in 2008. A victim of Malaga’s economic woes. 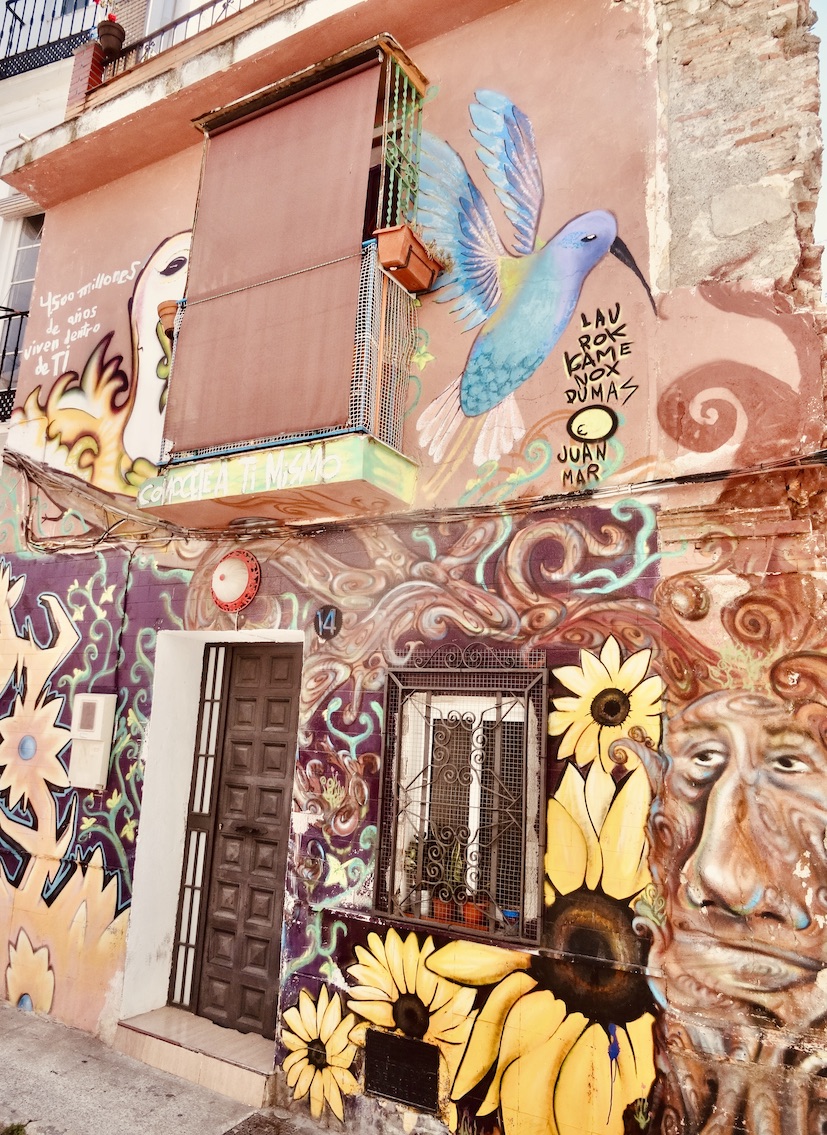 Devastated by abandoned homes, closed businesses and a growing community of drug addicts and criminals, for many years the police declared Lagunillas a no go zone to law abiding citizens. Happily, by the time I arrived in 2016, things were starting to improve. 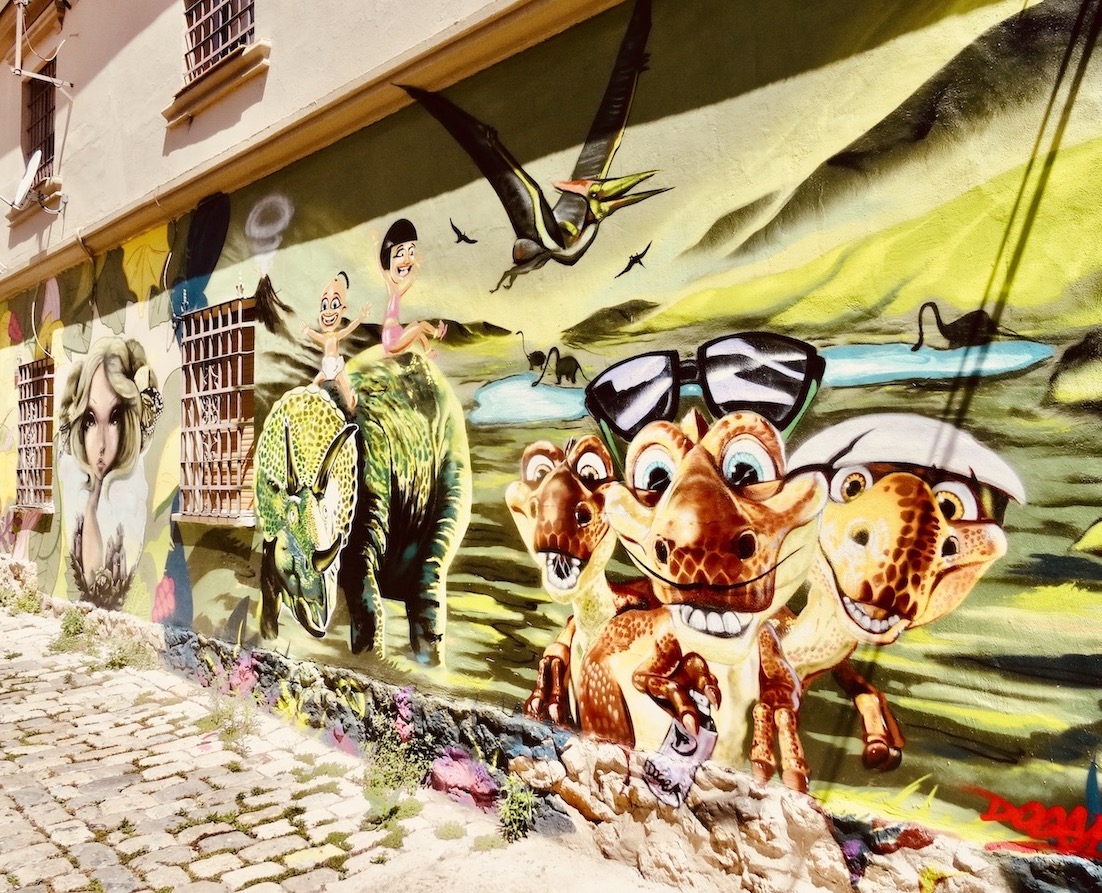 A street mural in Lagunillas.

First came a neighbourhood wide cleanup and a new drug rehabilitation centre. Then there were new trees, bushes, flower beds and a few benches. A number of dedicated neighbourhood associations, such as Fantasy in Lagunillas and The Future is Very Grease, kicked off an ambitious plan to fill Lagunillas with art. 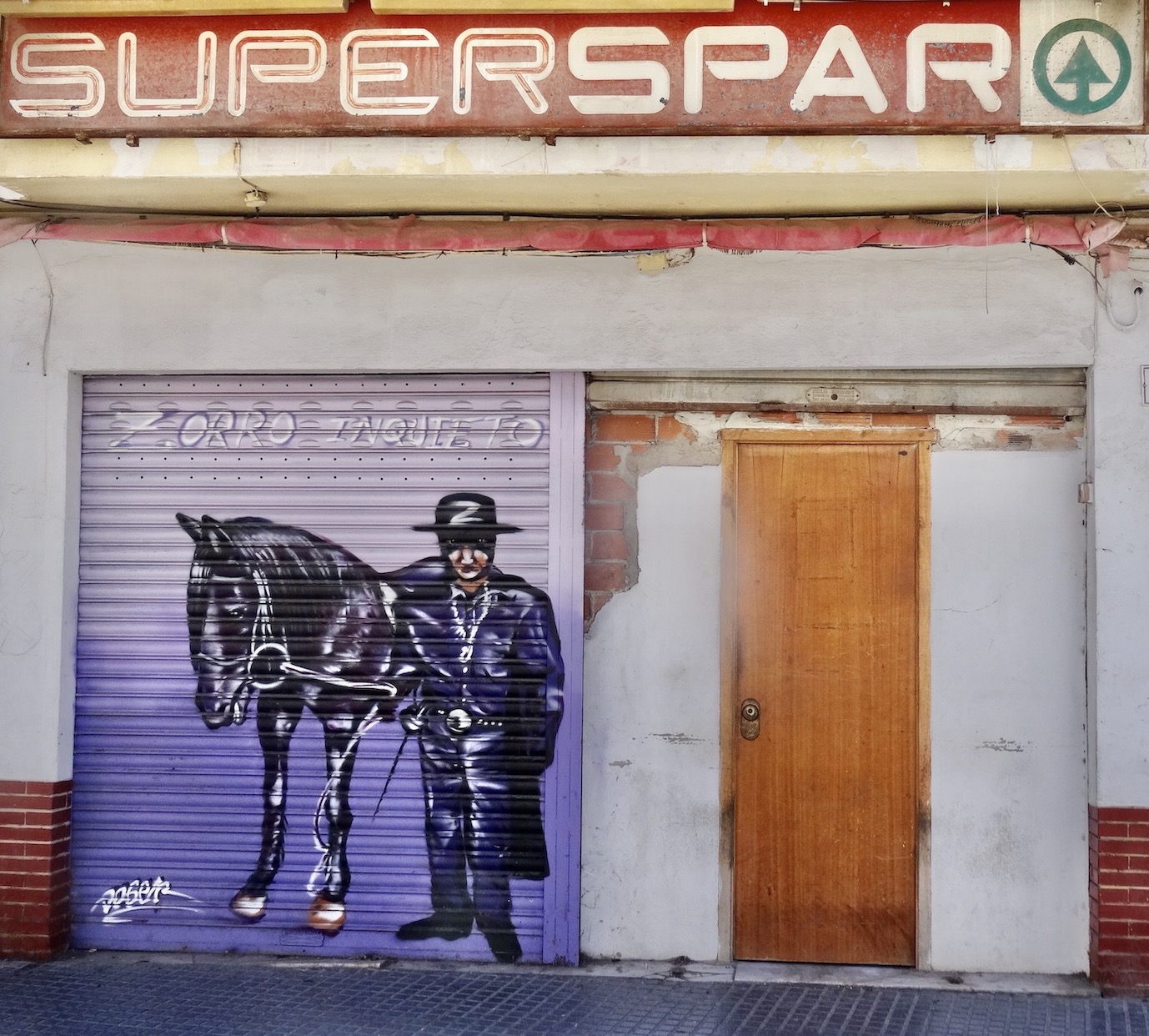 Their achievements have been nothing short of inspirational! Through art workshops and contributions from established painters, Lagunillas has been turned into an art wonderland!

It’s still growing too, with over a hundred murals to date. And while this particular Spar store remained closed at the time of my visit, slowly but surely businesses were starting to reopen. 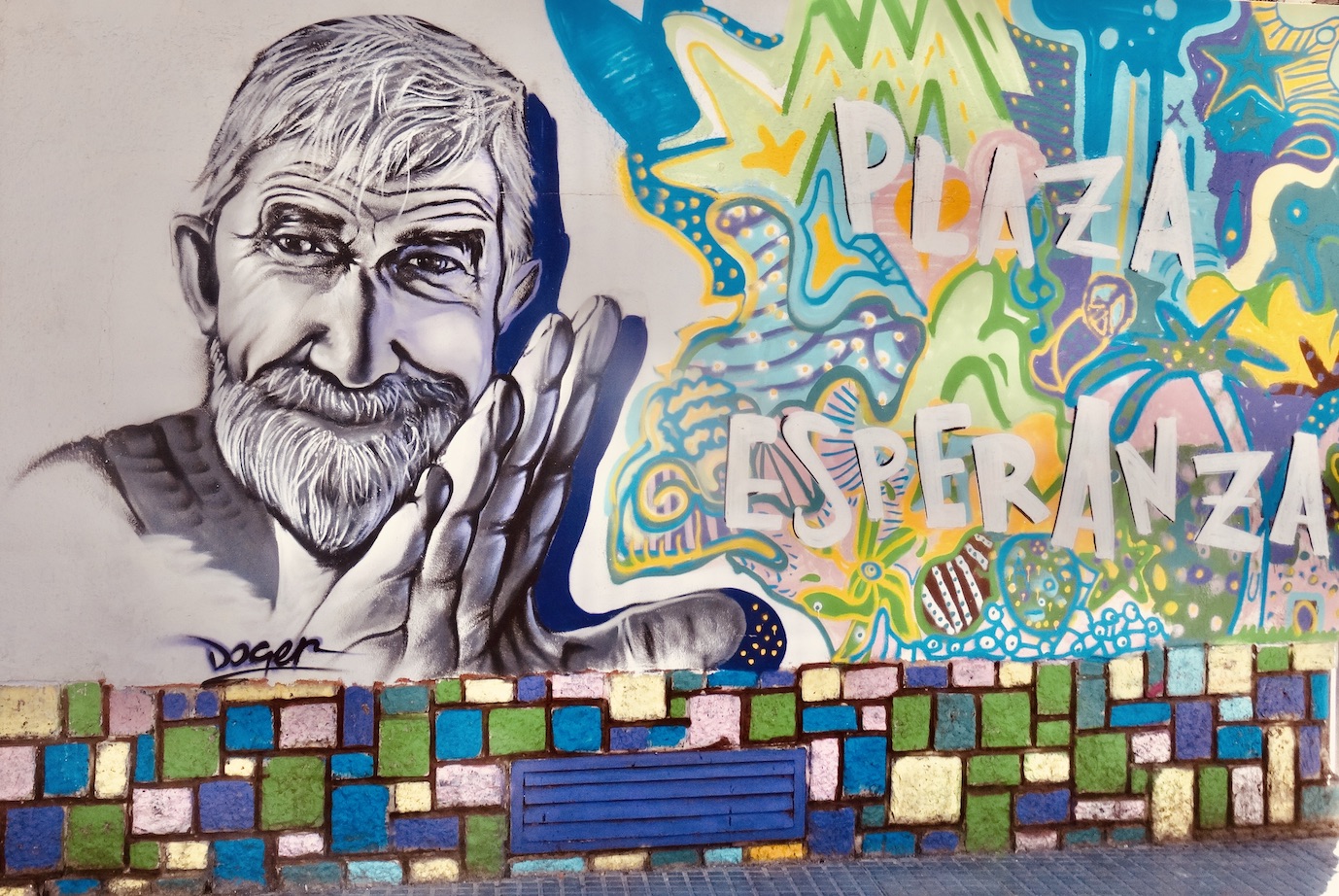 At the centre of it all stands Plaza Esperanza (Hope Square). Once an old abandoned parking lot, now it’s a flourishing park, basketball court and community centre that puts on occasional plays and musical performances. The Zaragoza born artist Doger painted the square’s main mural. 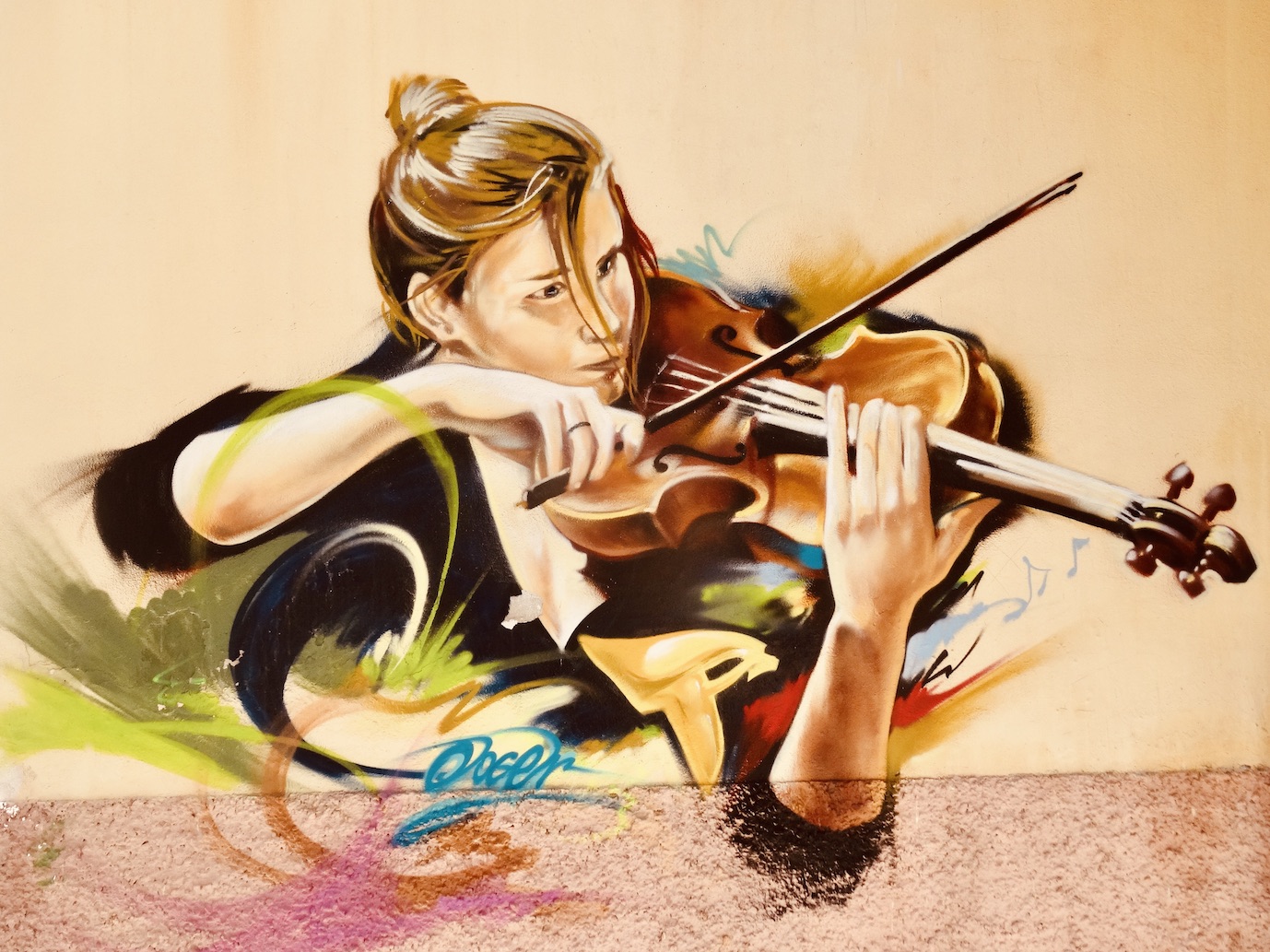 The Violinist by Doger.

Doger fans can find over a dozen of the artist’s paintings across Malaga. Another of his murals, The Violinist, is also in the neighbourhood on Calle Lagunillas. 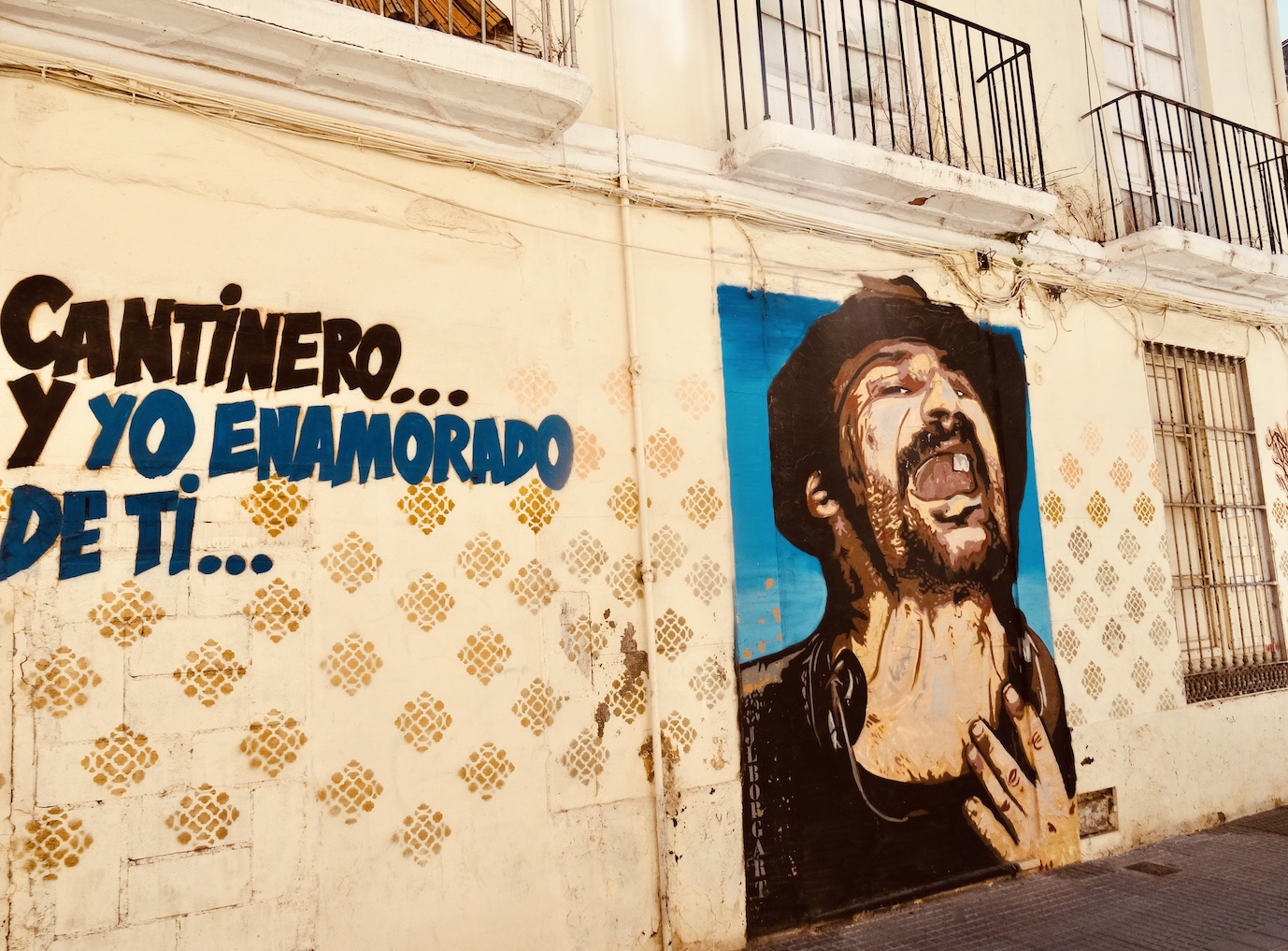 Several adored singers have been honoured in the murals of Lagunillas. Take El Chamorro, for example, an insanely talented Flamenco singer famed for his ferocious vocal delivery.

In the late 1980s he was on the verge of great things, having become a star in the clubs of The Costa del Sol. Unfortunately, his addictions to alcohol and smoking altered his voice and ruined his career. 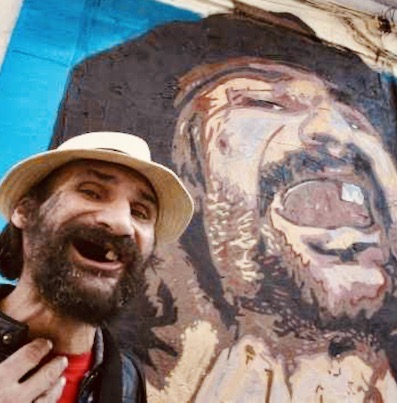 By the mid 1990,  El Chamorro had become homeless and lost all but one of his front teeth. Over the past decade he’s been singing for tips around the squares of Malaga. Indeed I saw him myself once when he performed on Plaza de la Merced.

While the irreversible damage to his voice was clear for all to hear, there were nevertheless traces of the brilliance that had once thrilled so many. The mural, which references one of his songs, is a fitting tribute to an incredible talent. 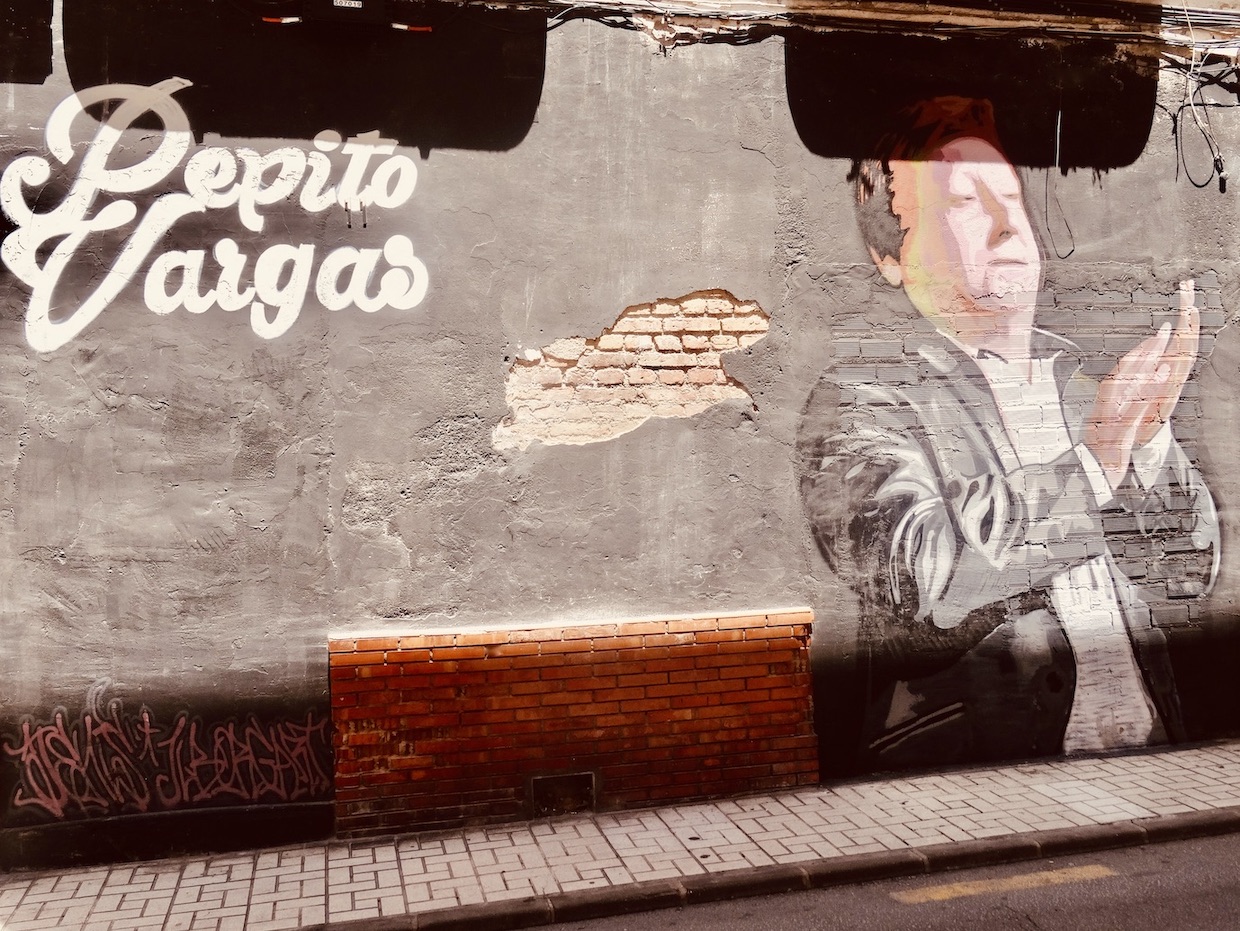 Nearby, there’s also a mural dedicated to Pepito Vargas, one of Spain’s most celebrated Flamenco dancers. Born in Malaga, he spent sixty years dancing all over the world before retiring in his hometown, where he saw out his final days. 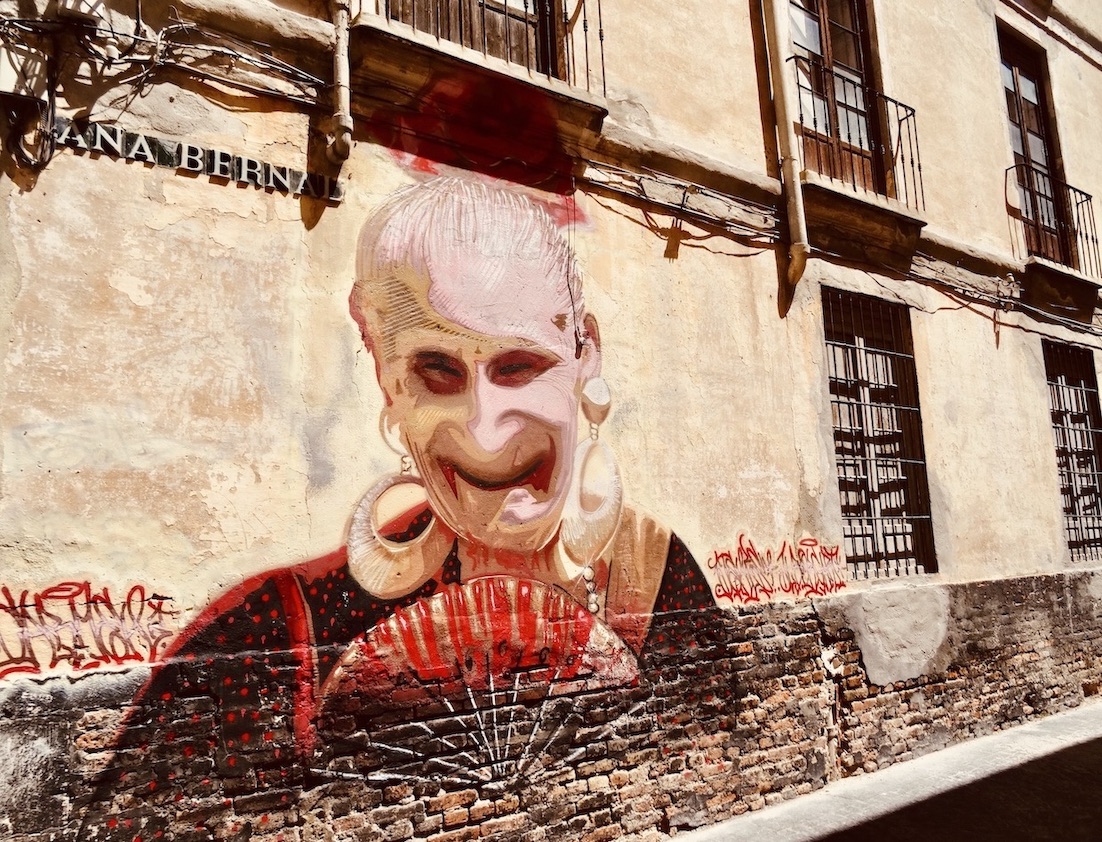 Meanwhile, the award for Most Terrifying Mural goes to Jose Luis Bogart and his untitled depiction of an elderly woman in traditional dress clutching a fan. No kidding, it felt like she was looking right into my soul. 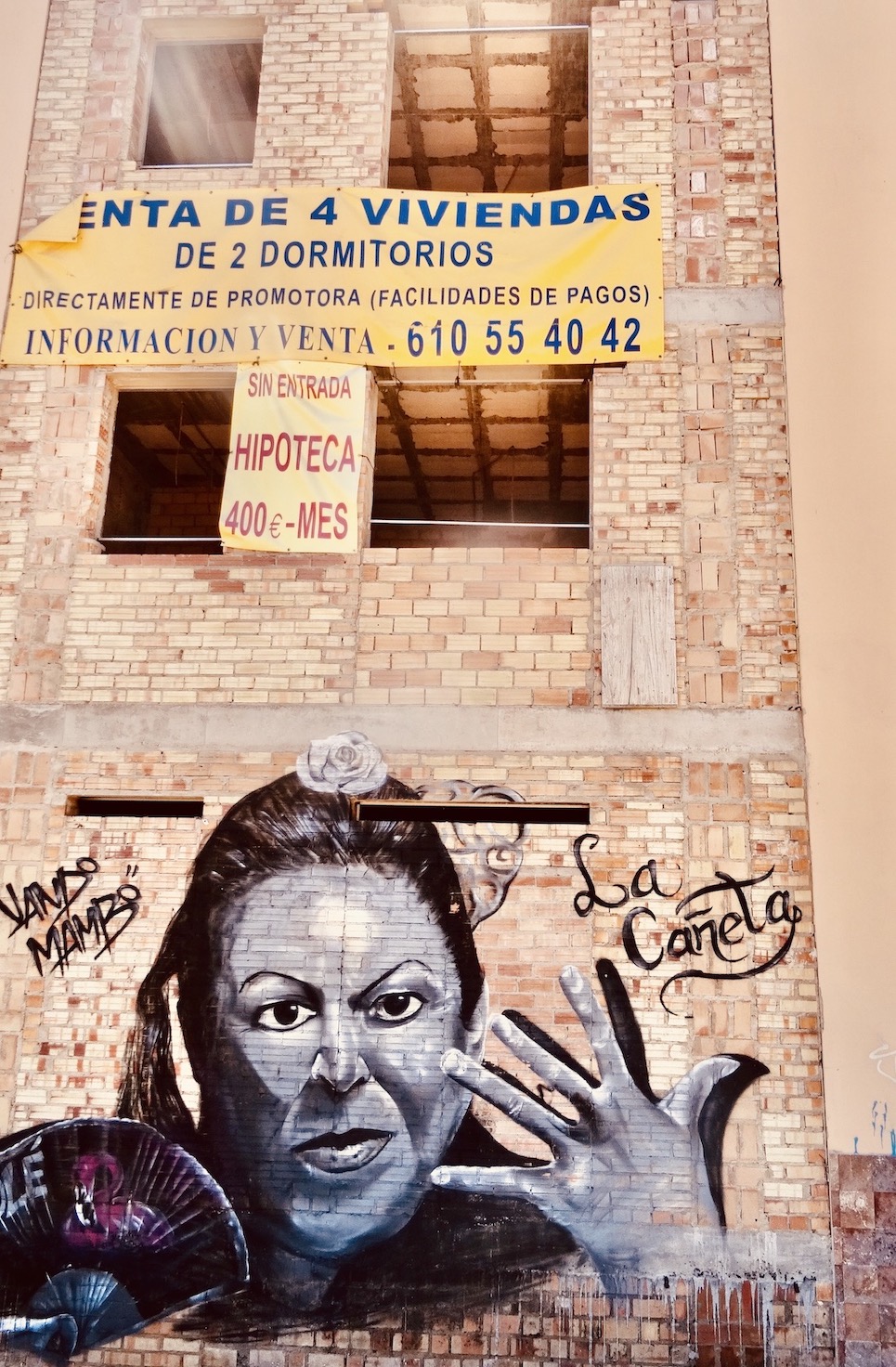 Signs of a new dawn in Lagunillas.

As a result of Lagunillas’ regeneration, people are actually starting to move back into the neighbourhood. I spoke to a young couple who’d bought a dirt-cheap, dilapidated house, while there were also a few new apartment blocks under construction. This one, probably finished by now, is on Calle Roque Garcia. 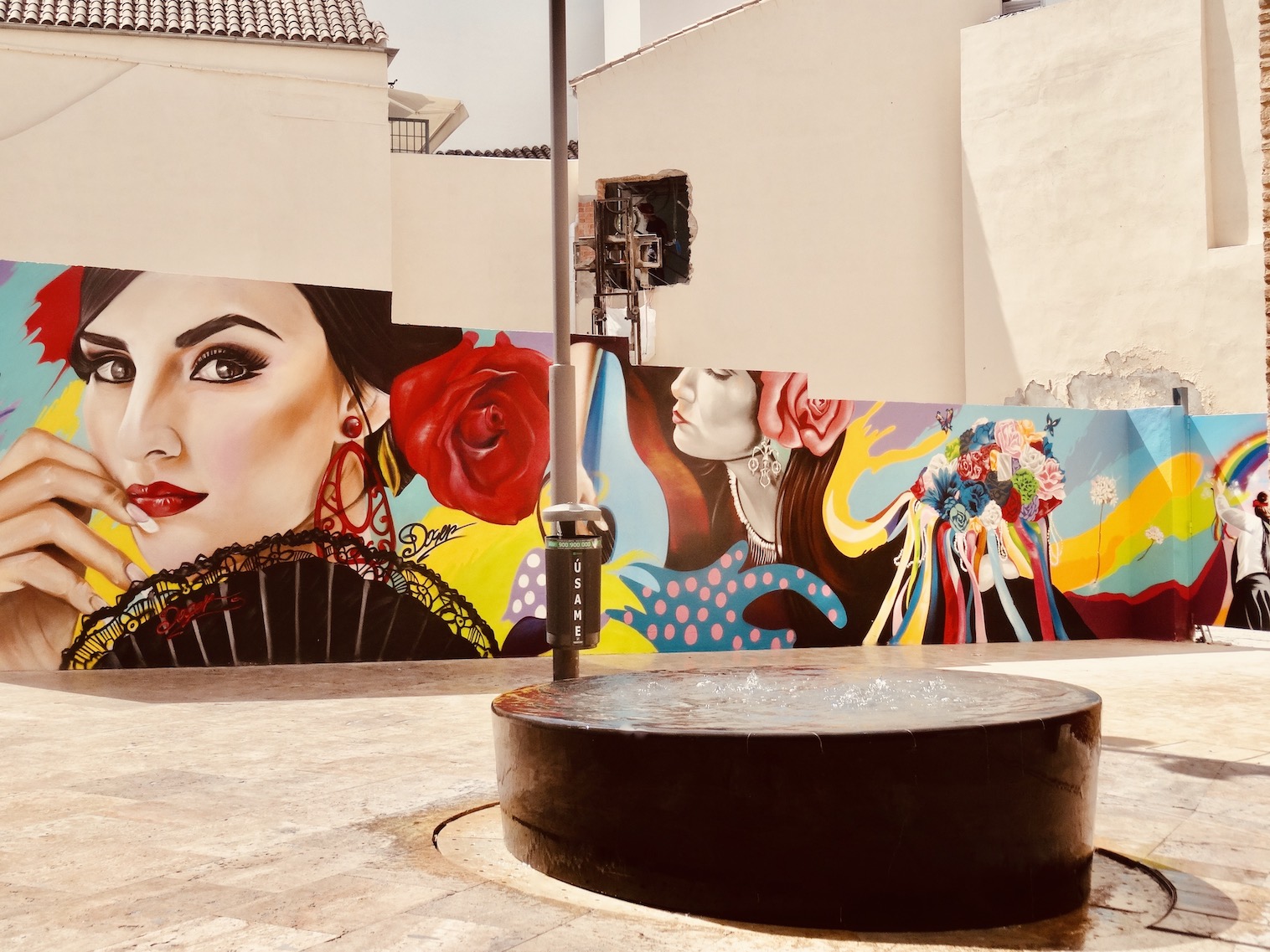 Malaga’s most popular collection of murals sits in The Jewish District on Plaza de la Juderia. In 2010 construction of a new synagogue began here, although the entire project was later abandoned.

In an attempt to cover up the hideous building site, a number of artists came to paint sections of the outer wall. Once again Doger was involved, contributing the alluring Andalusian woman with a red rose in her hair. 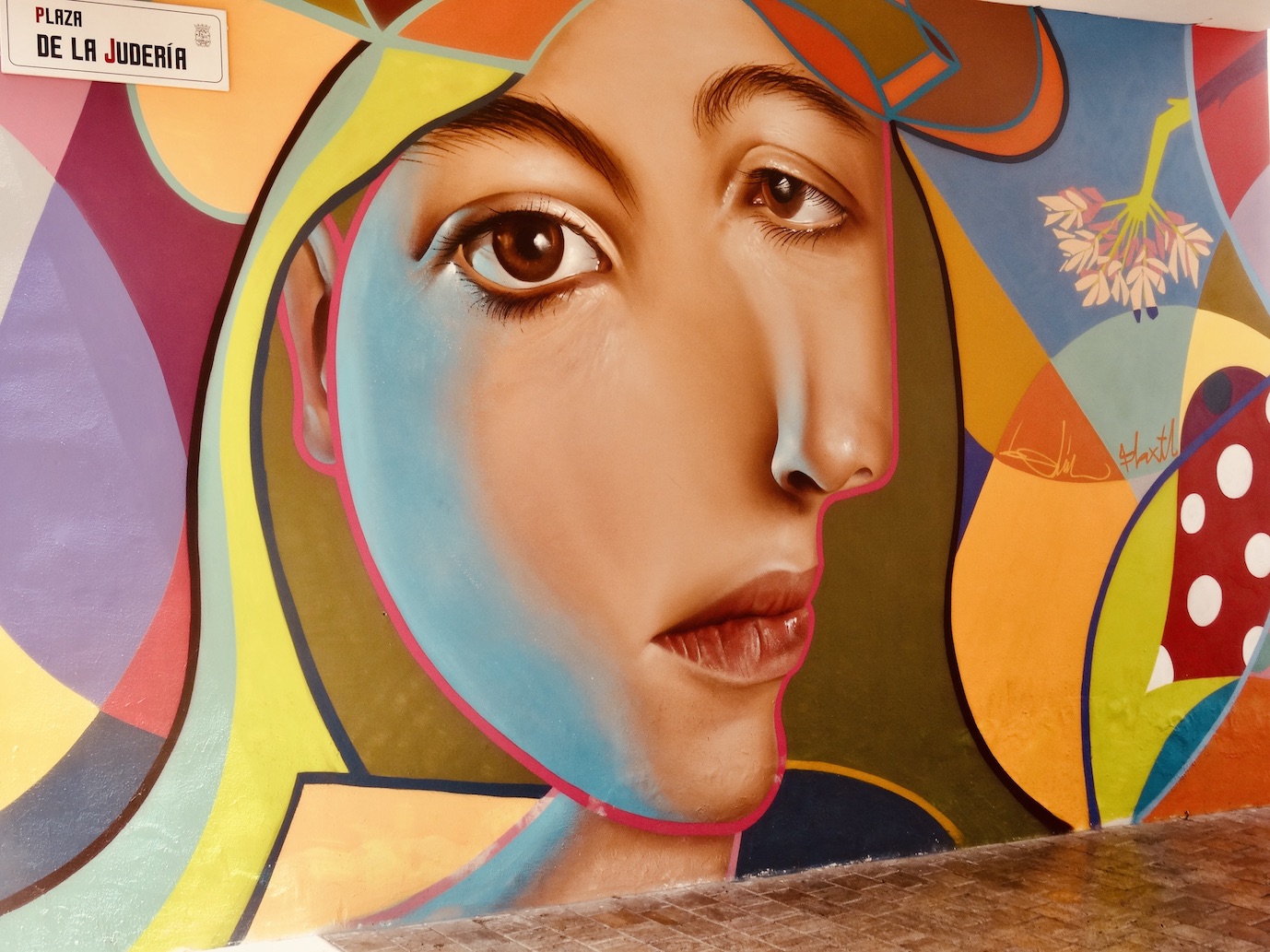 This part of the wall is by Miguel Ángel Belinchón Bujes, better known as Belin. Inspired by the great Pablo Picasso (also from Malaga), his painting is a “post Neo Cubism” portrait of his daughter Natalia. 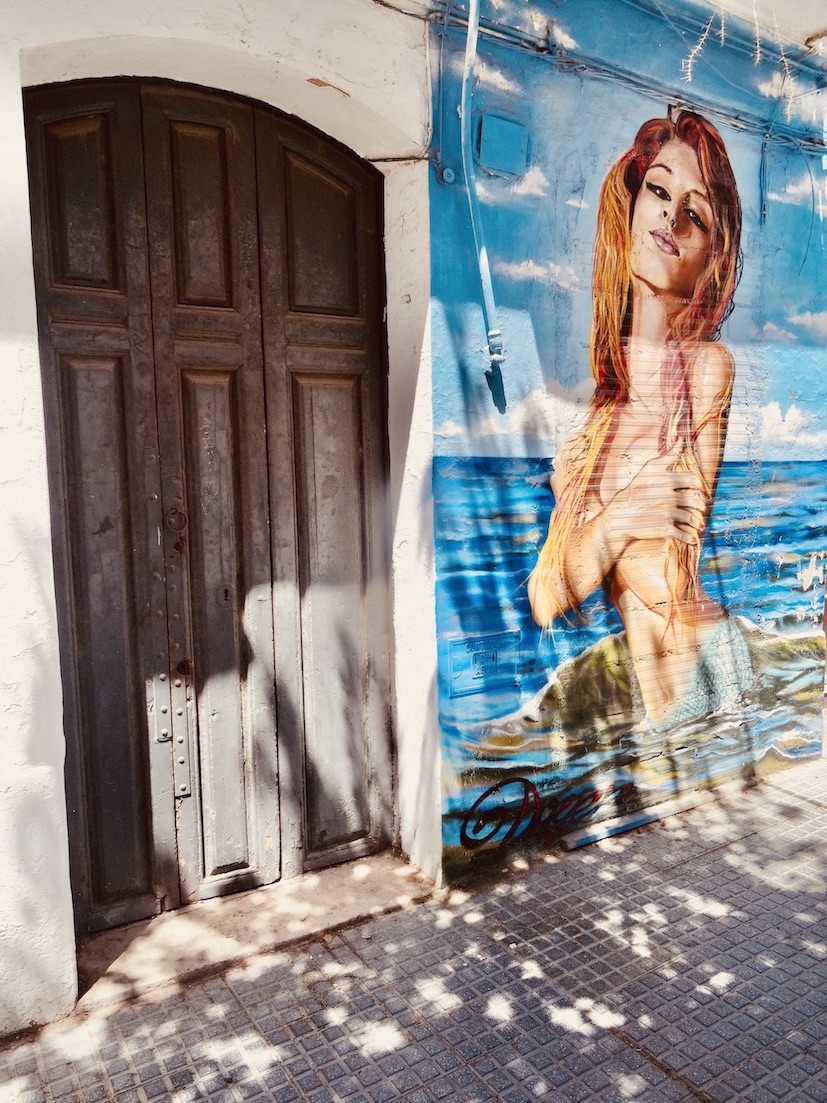 Not aware that Ursula is in town.

I really enjoyed my day seeking out street art in Malaga. I took countless photos, hence I certainly wasn’t short of images for this article. Rather, the challenge was in finding solid info on the murals I’d captured.

Not wanting to leave out some of my favourite shots, I’ll wrap this piece up with a final string of murals I photographed that day. 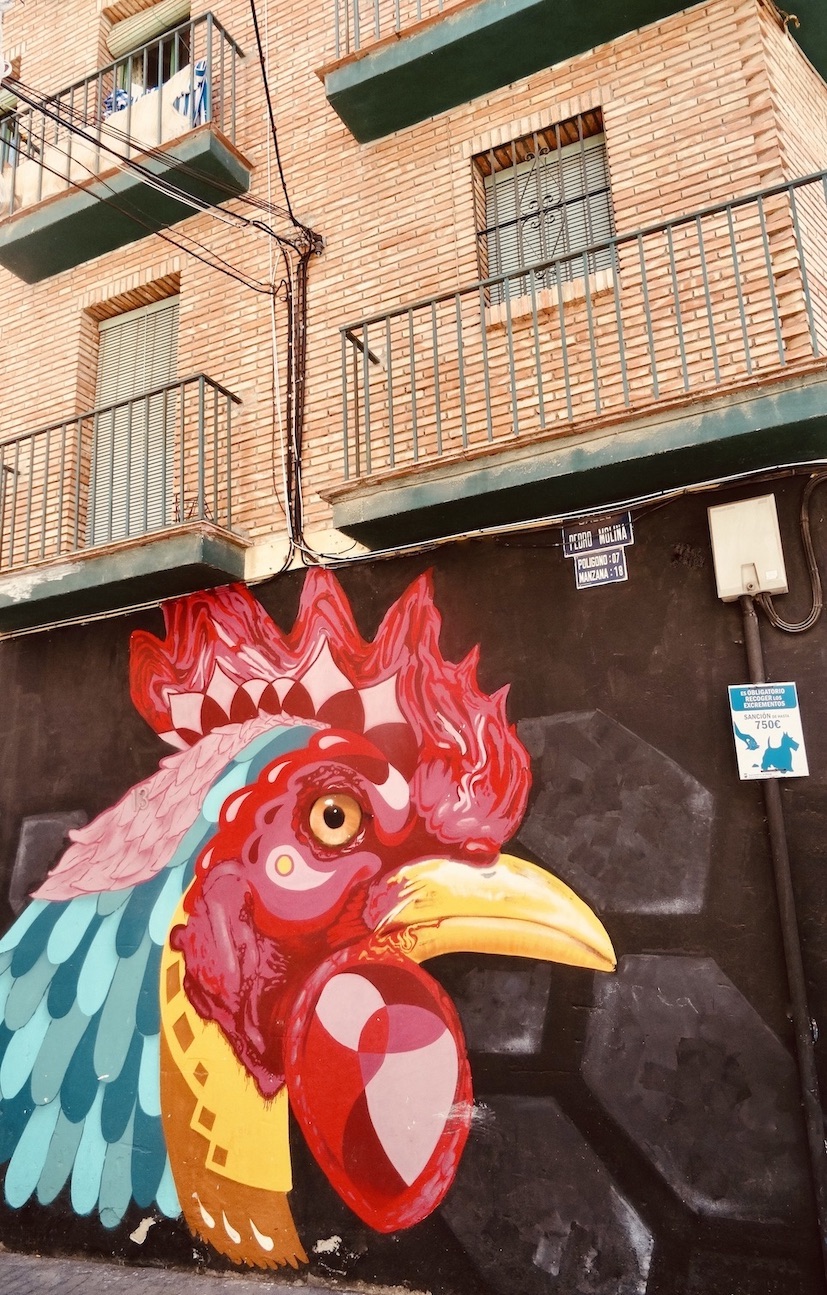 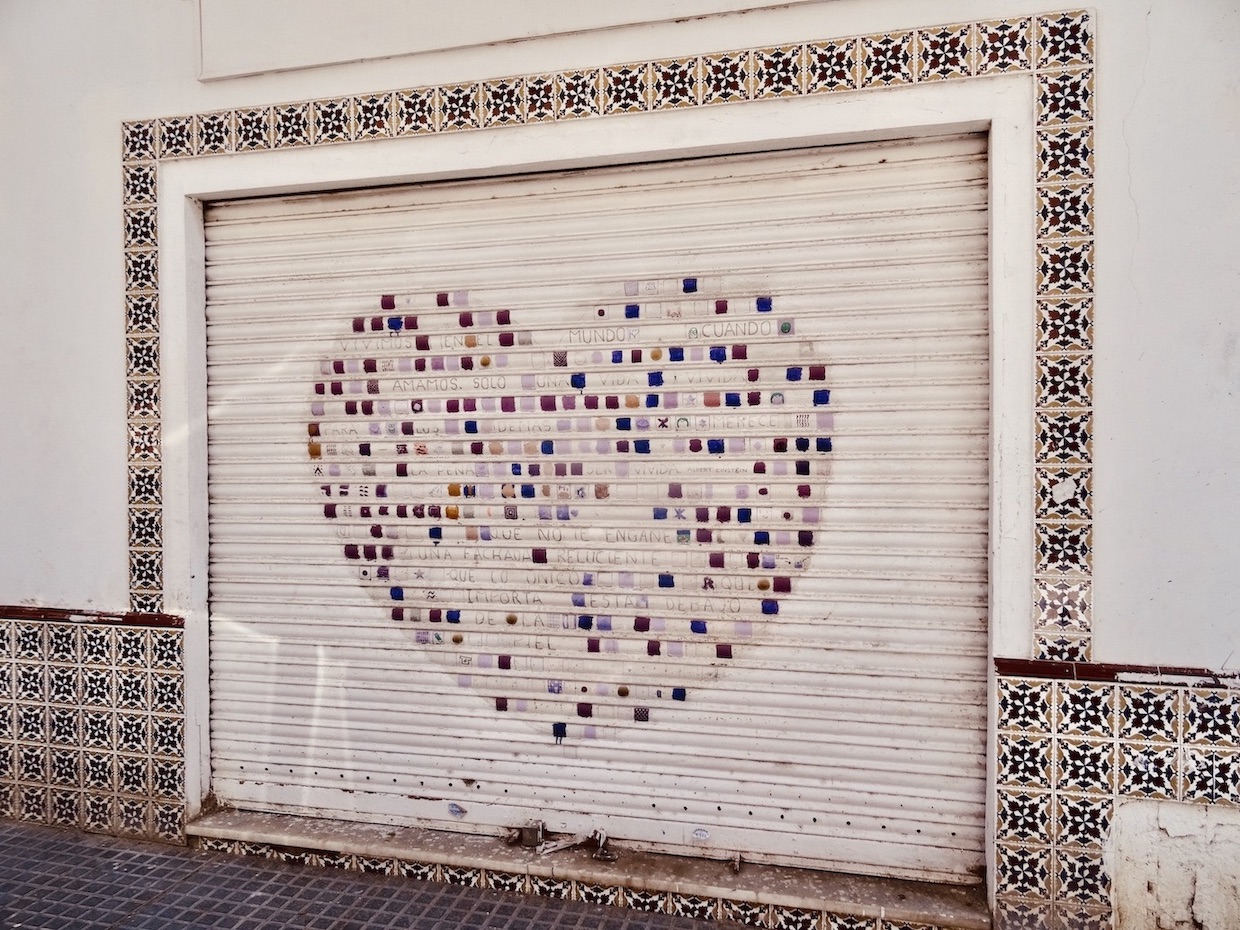 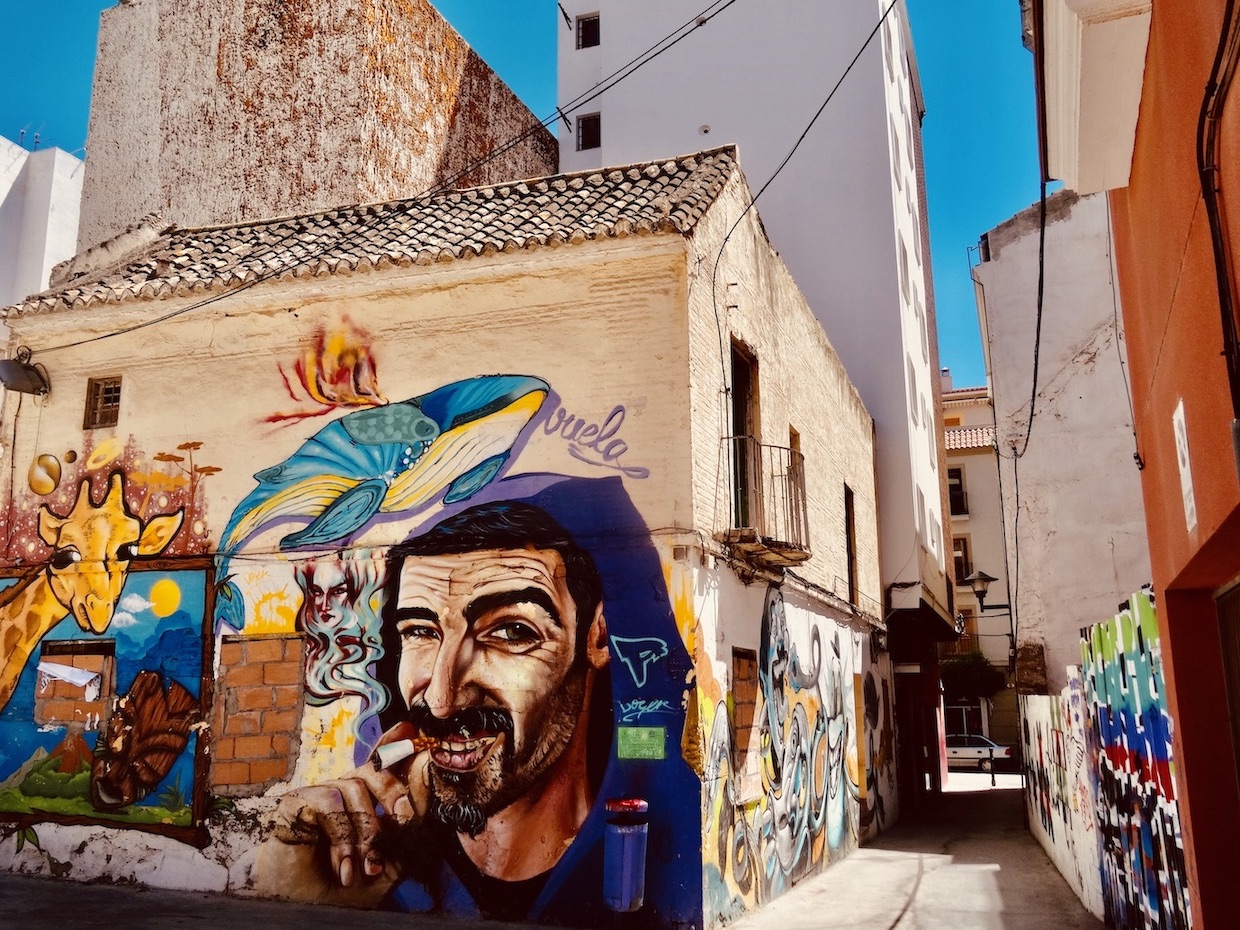 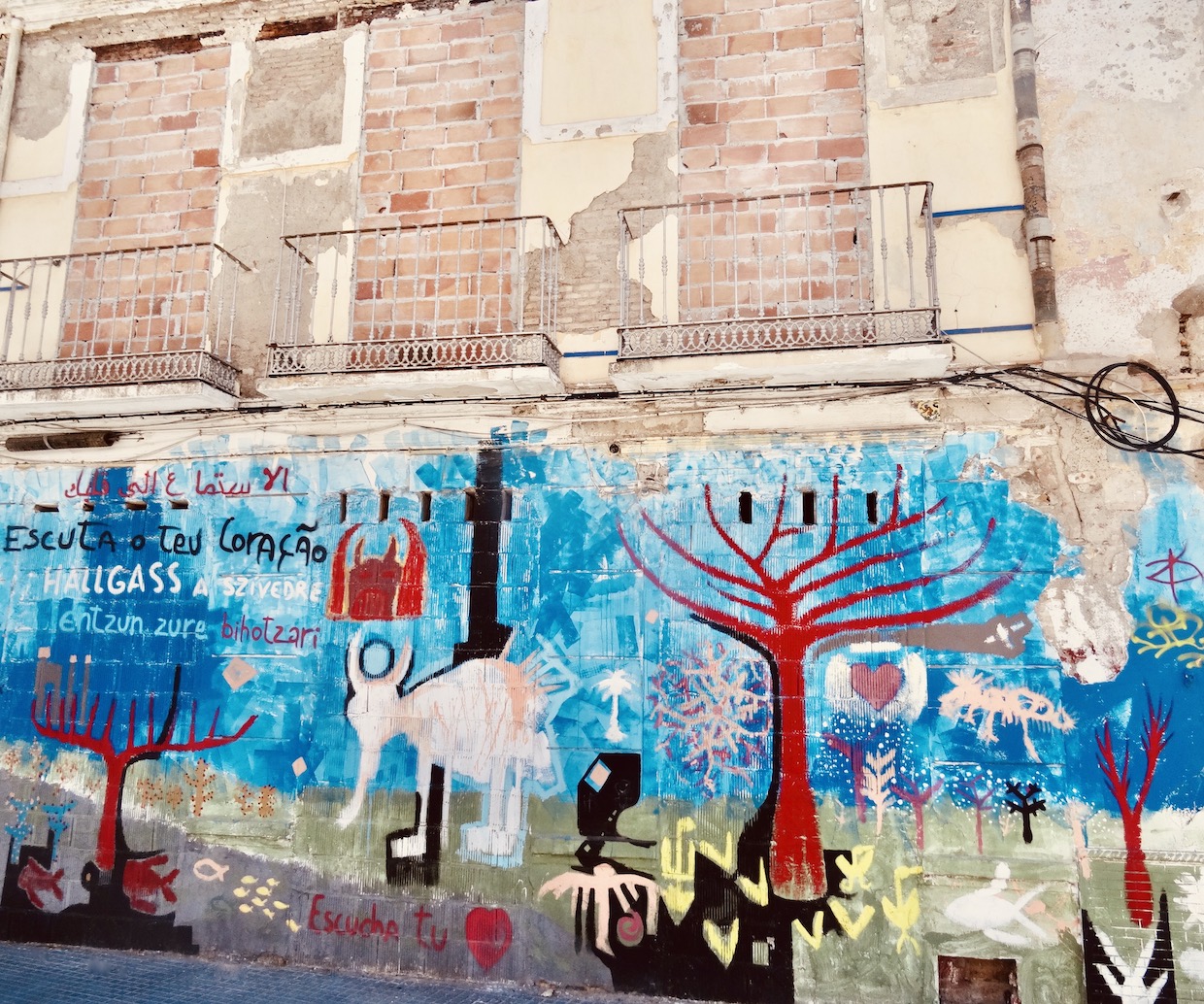 Interested in visiting Malaga? Why not consider a tour of the city’s graffiti and murals with Streetartmalaga.com