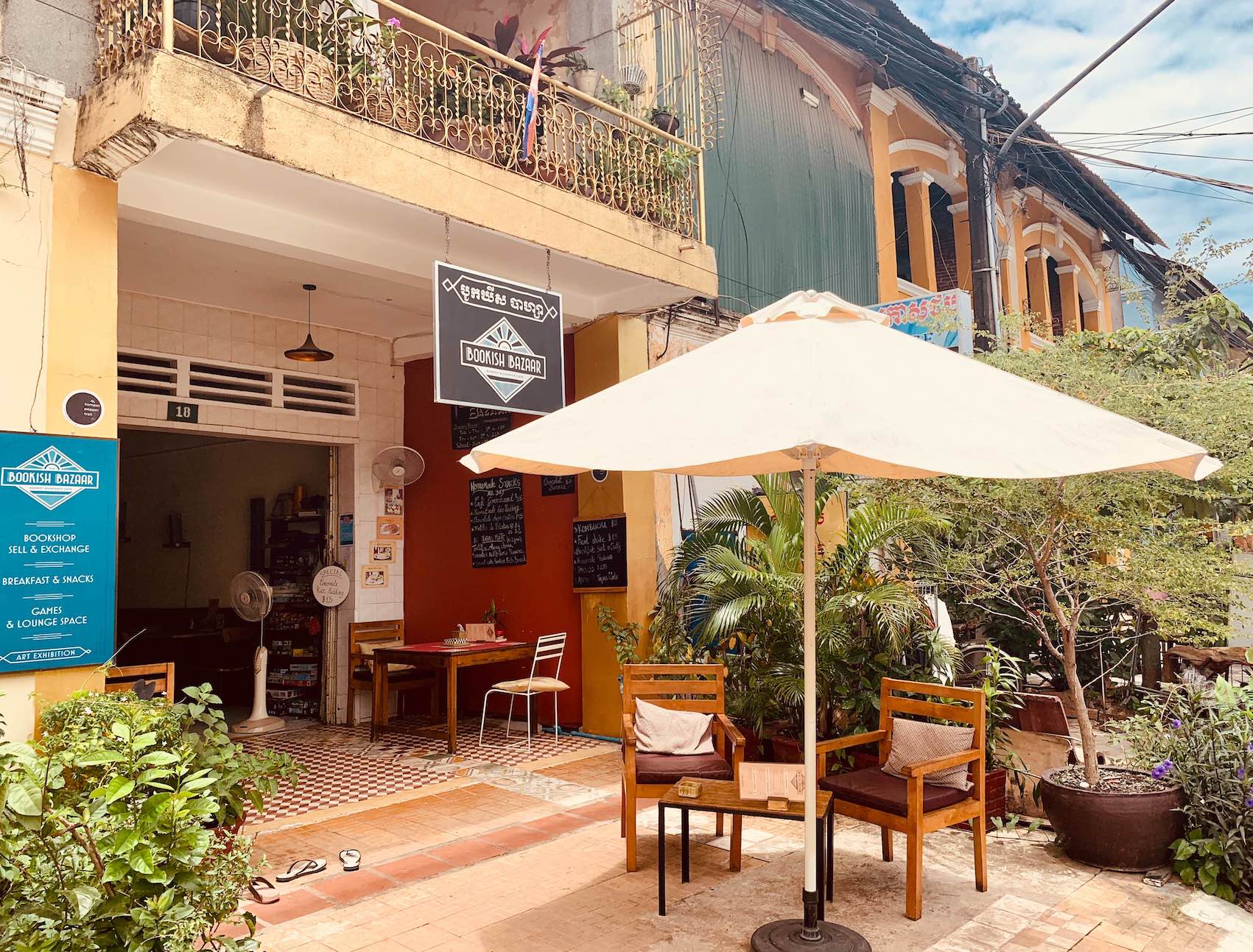 August 2020. There’s a well-worn saying about sleepy towns that goes something like: “It’s small and relaxed, but has everything you need”. Unfortunately, this doesn’t apply to the charming Cambodian outpost of Kampot. In fact, one of the things that struck me during our two month stay is how, if we lived here, we’d probably need to go to Phnom Penh every month just to address various needs. 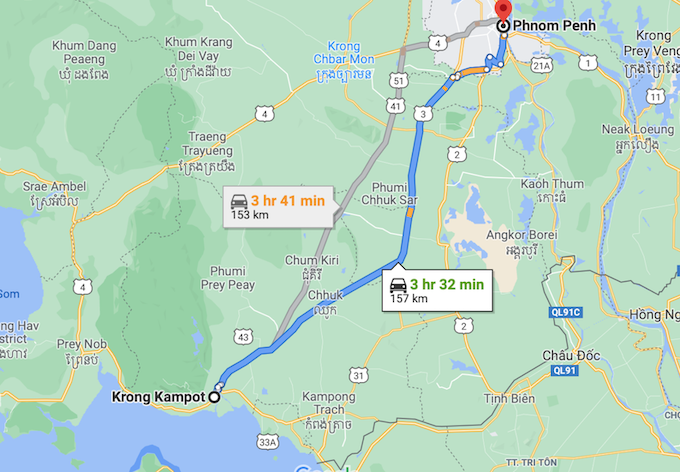 I was also left ruing the absence of a bookstore. Especially as Kampot is the perfect place to kick back and watch the world go by with a choice paperback. But then, one afternoon, Sladja and I stumbled upon Bookish Bazaar in the old quarter.

Approaching its handsome, balcony-laden facade, at first glance it seems like just another understated, pleasingly languid cafe. Always up for a coffee and a bite, we headed inside where, even by Kampot’s standards, the atmosphere was one of unapologetic laziness. 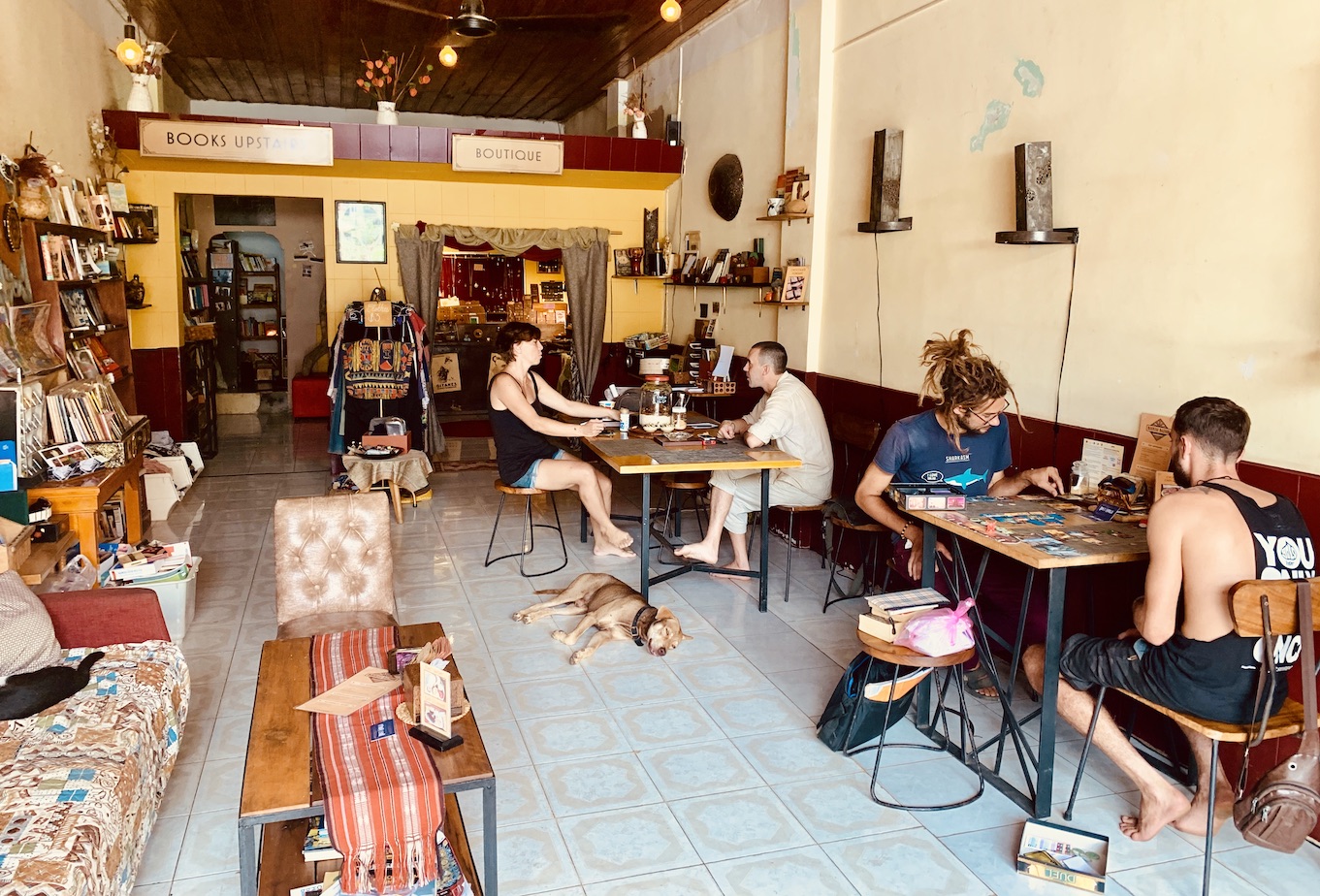 A pair of shaggy dudes sat completely immersed in the tactical battle of a board game. A cat napped on the sofa, while a dog audibly snoozed on the cool tiles of the floor. The cafe’s French owners, Maeve and Niko, shot us nods and smiles, seemingly happy to let us wander a bit before choosing a seat. 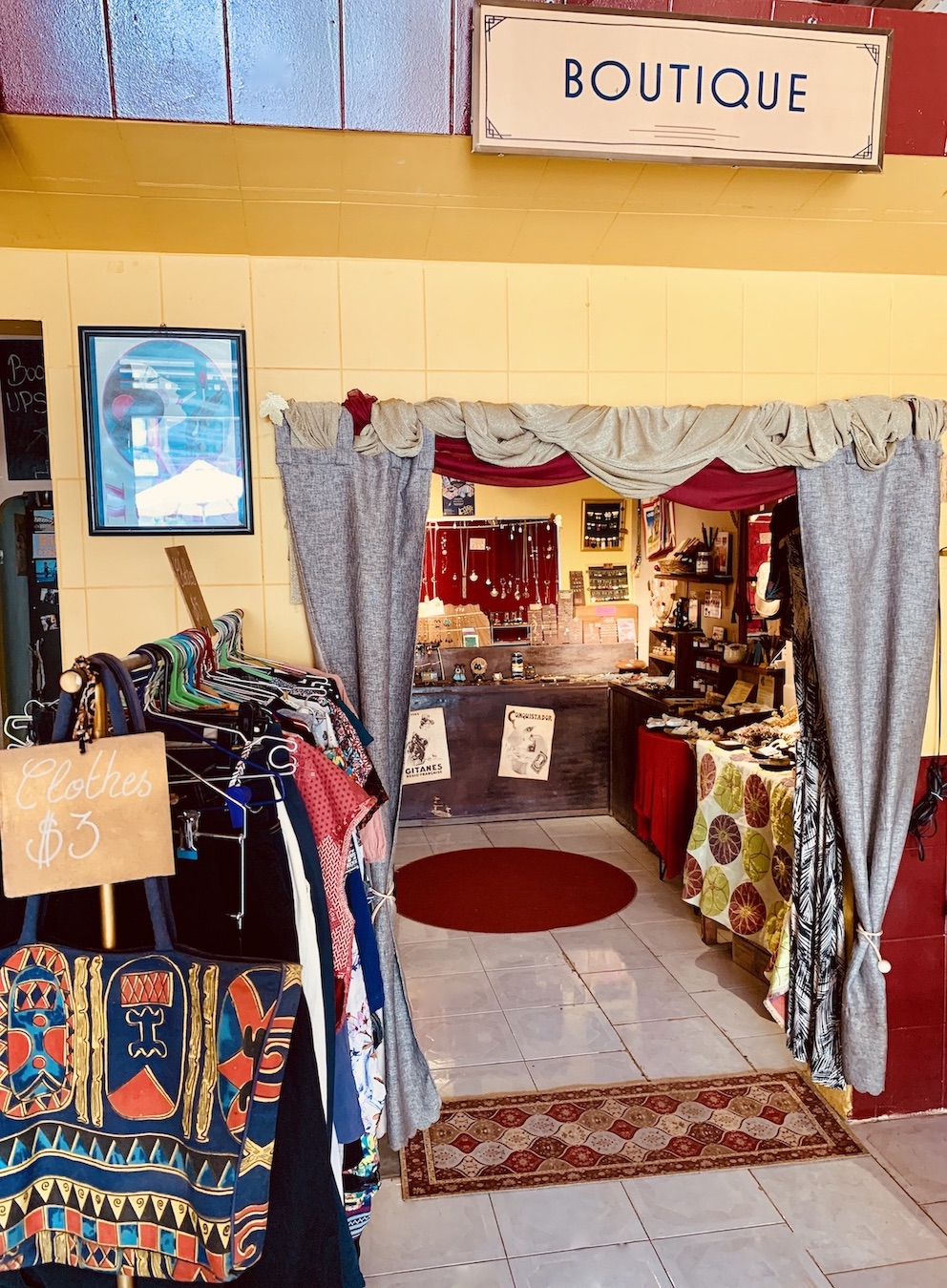 At the far end of the ground floor, there’s a small but lovingly crafted boutique store that promotes the work of local artists. Sifting through the various tables and shelves, we found artisan dresses, hats and bags. Moreover, there are Kampot and Kep themed handmade greeting cards, fragrant organic soaps and lots of jewellery. 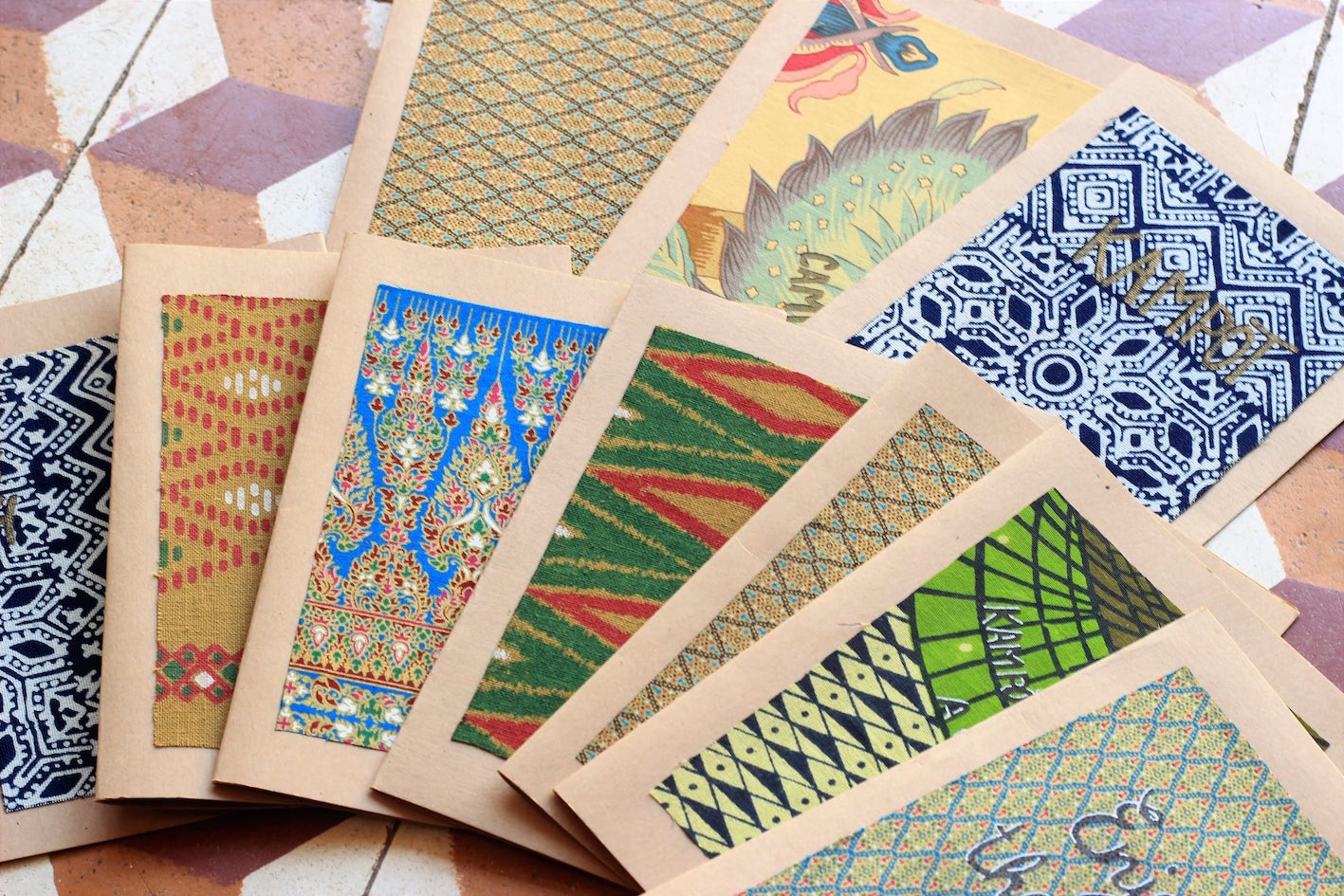 It was also fun to rummage through the old cans of vintage Asian photos and postcards. Some of them date as far back as the 1930s and are well protected in little plastic covers. 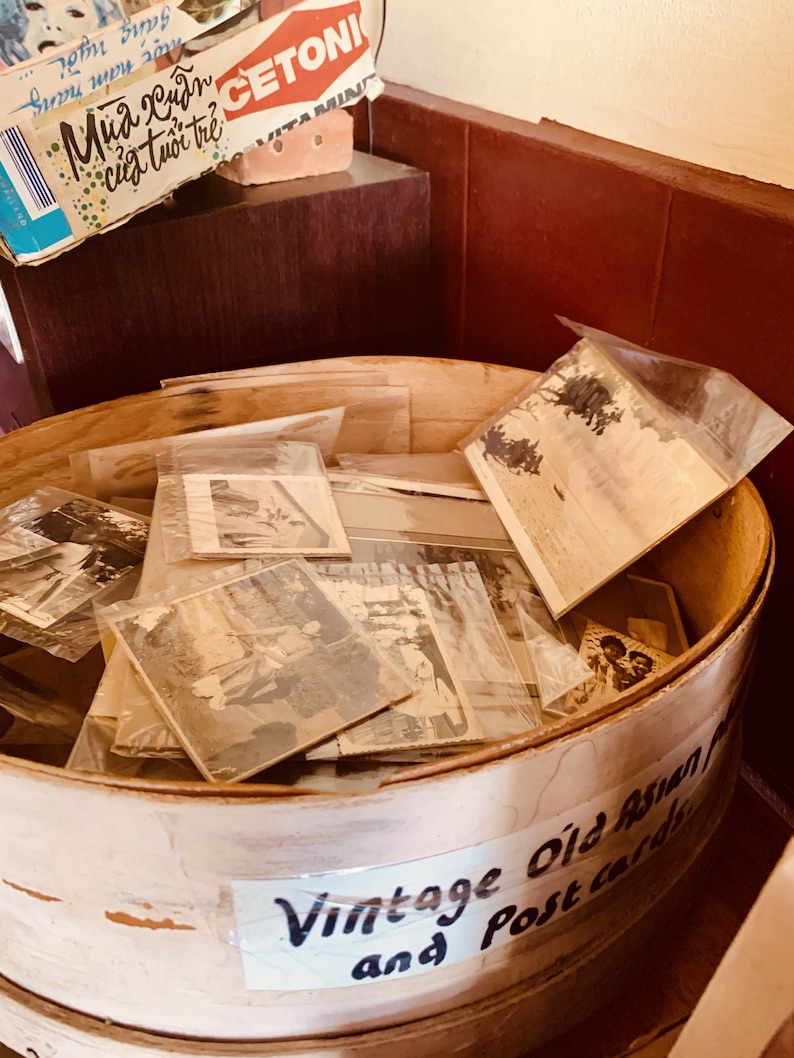 According to the sign, the books are upstairs, so up we went, curious to see what kind of bookshop lay in wait. “Oh wow!” I found myself saying out loud, as we emerged into a large, high ceilinged hall home to over seven thousand titles.

Opened in 2017, Kampot’s premier book centre started with around five hundred titles imported from Maeve’s native France. Over the years, she says, it has expanded beyond her wildest imagination. Due to the fact that so many bookshops closed in Phnom Penh and nearby Sihanoukville. 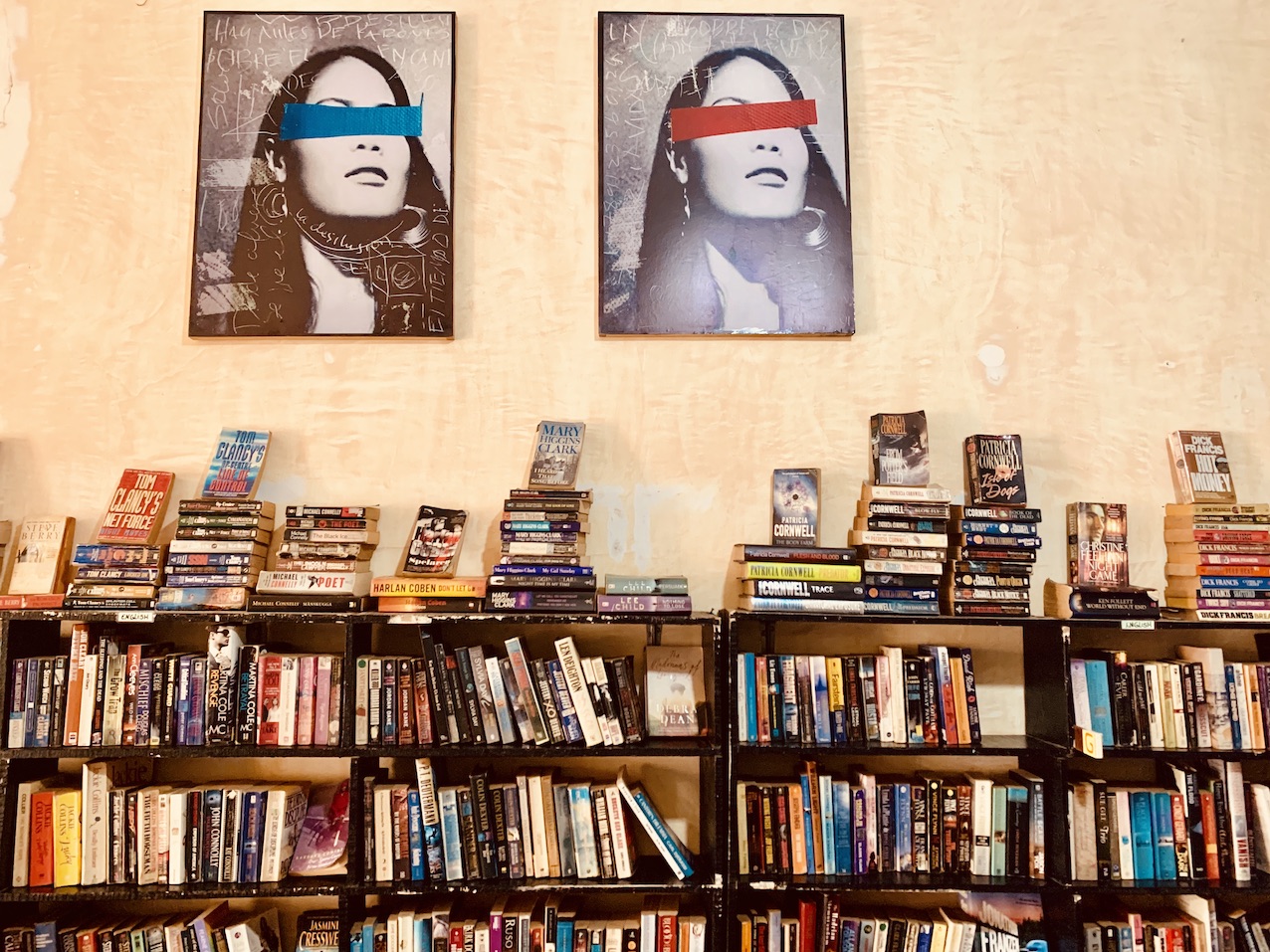 While the majority of titles are in English and French, there is an array of languages on display, including Spanish, Dutch, German, Italian and Swedish. Prices depend on the number of pages. For example, a 150 page title goes for $3, while 500 pagers are priced at $5. 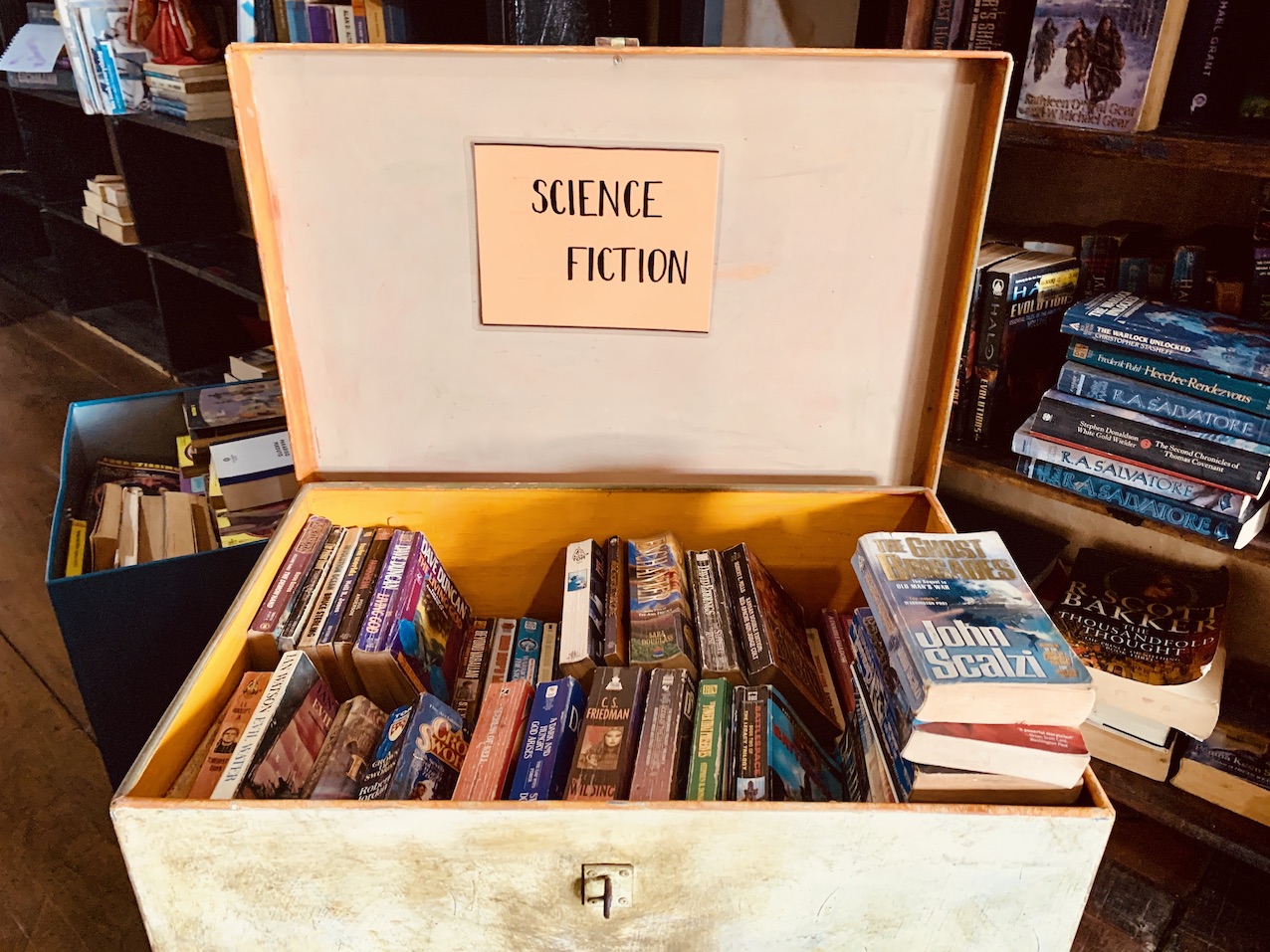 Furthermore, they also have a decent exchange policy. Bring one book in and get 50% off any title. Or bring two books in and get one back for free. 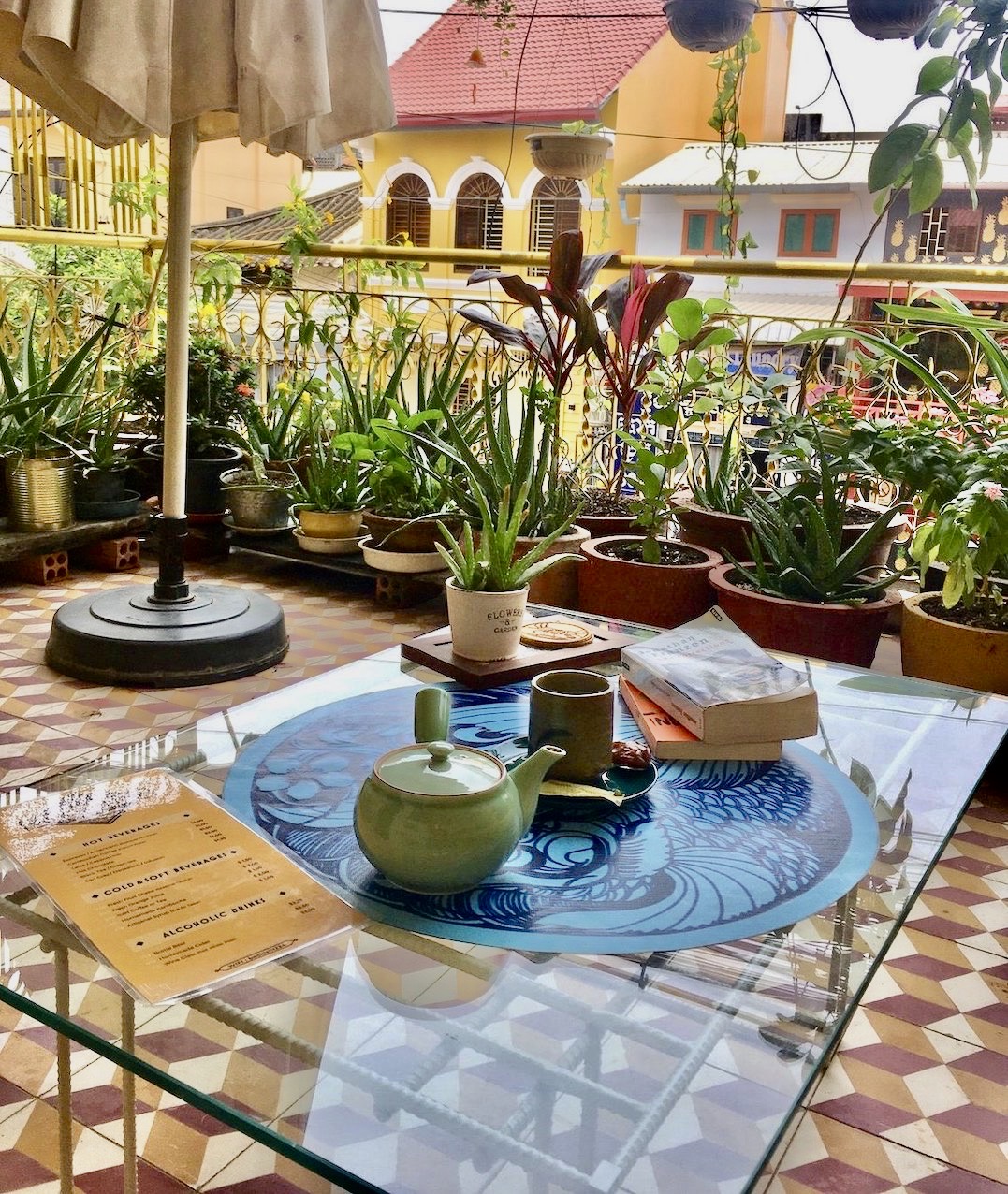 At the back of the top floor there’s a gorgeous little balcony with a much coveted table spot right among all the plants, flowers and trees. So coveted in fact that we never actually got to sit there during our visits to Bookish Bazaar. 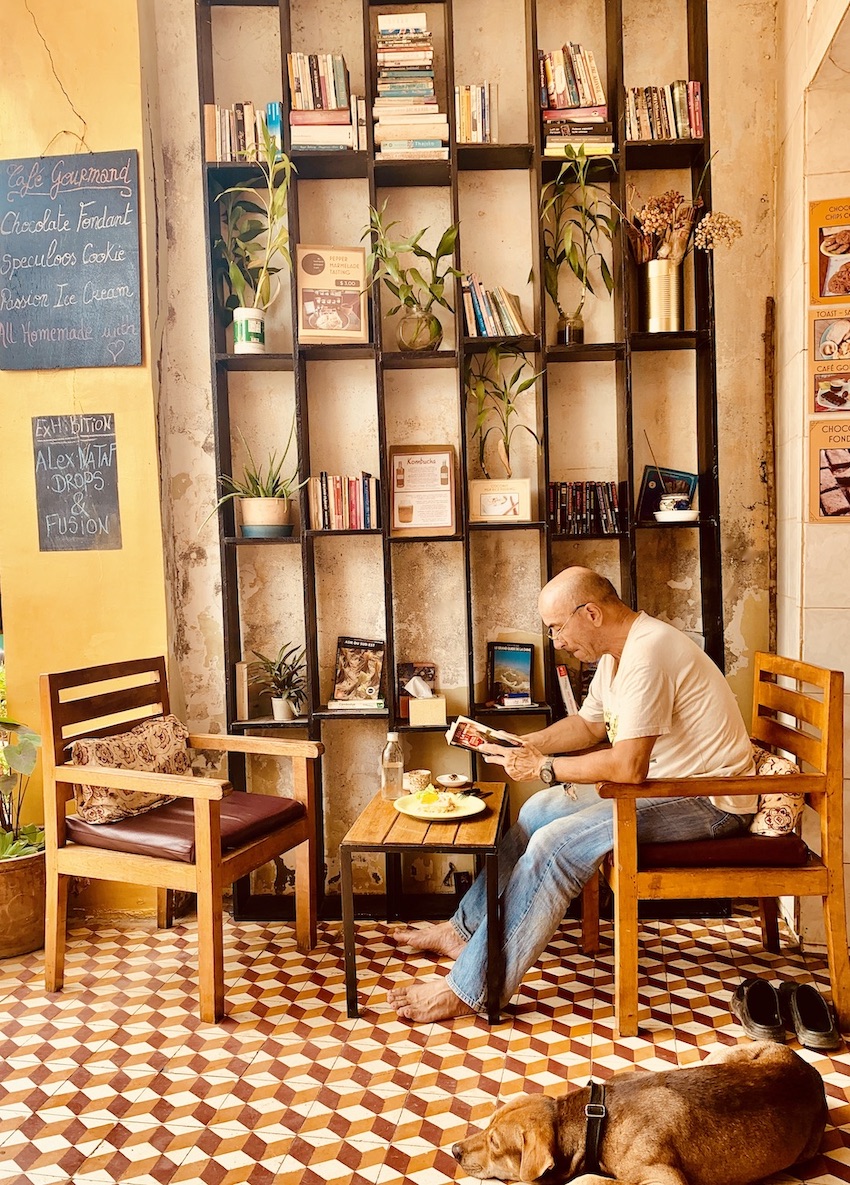 Instead, we made do with a ground floor table from which to enjoy our bookish meals. Happily, I can report that the cafe’s appeal extends way beyond the available literature.

While the menu is somewhat limited, what they do they do very well, with an emphasis on fresh pastries and healthy, beautifully prepared mediterranean food from Maeve’s Spanish/Algerian roots. 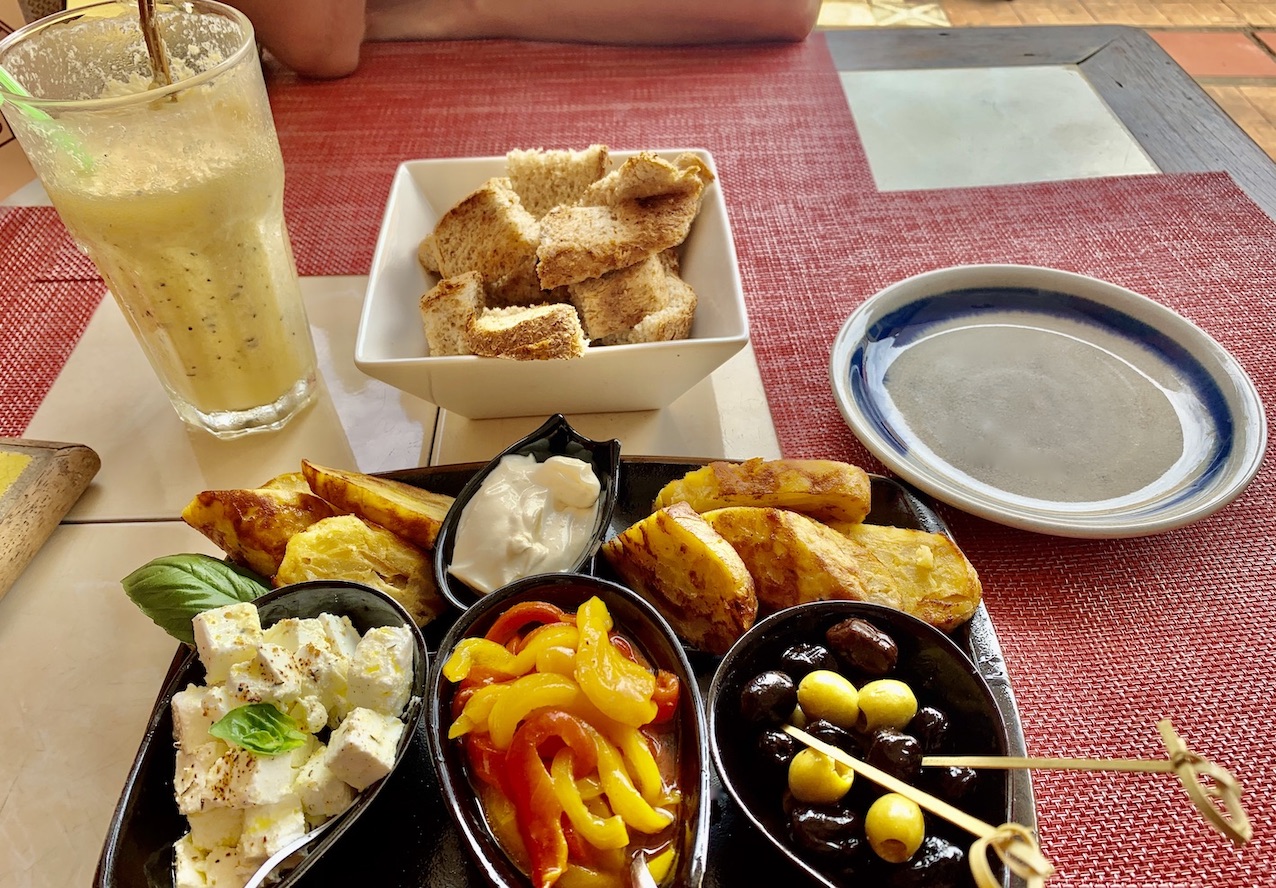 Our favourite was The Tapas Plate, which can serve two people. It really is a festival of deliciousness, with mixed olives, oily peppers, seasoned feta cubes, toasted bread and crispy tortilla dipped in mayonnaise. They also do paninis, fruit shakes, the usual range of coffees and a house speciality dessert, the Coconut Milk Rice Pudding. 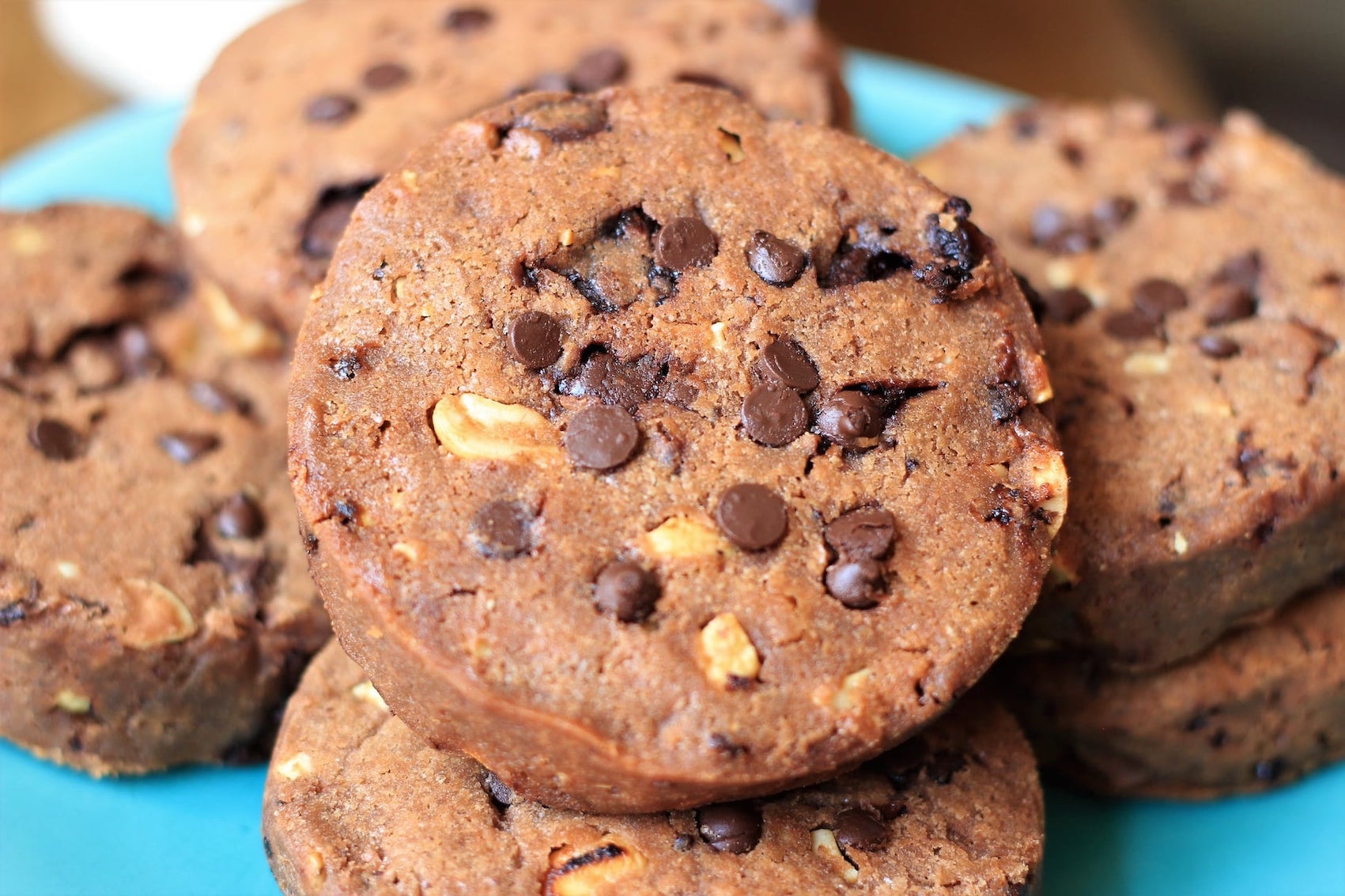 Usually, on our way home, we’d grab a couple of their chocolate chip cookies, which in my book are the best in town. Since COVID broke Maeve admits business has been slow, with their clientele being almost exclusively expats from Kampot, Phnom Penh, Battambang and Siem Reap.

If you find yourself in town, do go and pay them a visit. You can get in touch with Maeve and Niko through their Facebook page.