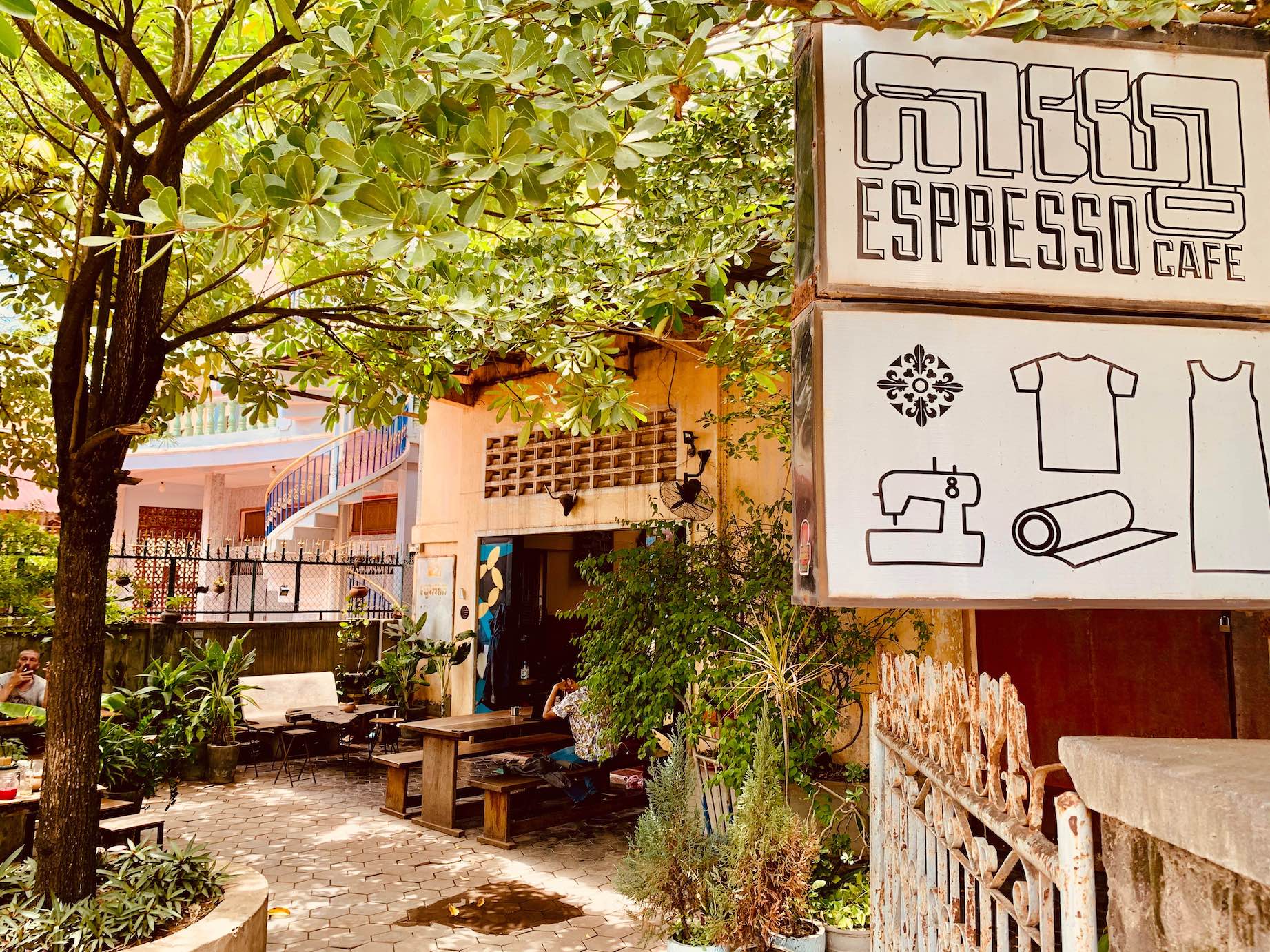 August 2020. During our first weeks in Kampot, Sladja and I spent a good chunk of time exploring the local coffee scene. Before long, there was a name that kept cropping up again and again. In online comment threads, through face to face recommendations and in overheard snippets of conversations, it swiftly became clear that we really needed to check out Cafe Espresso.

Moreover, we soon realised that the cafe was just a twenty minute walk from our lodgings at Kool Kampot Guesthouse. Thus we set off one morning to see what all the fuss was about. 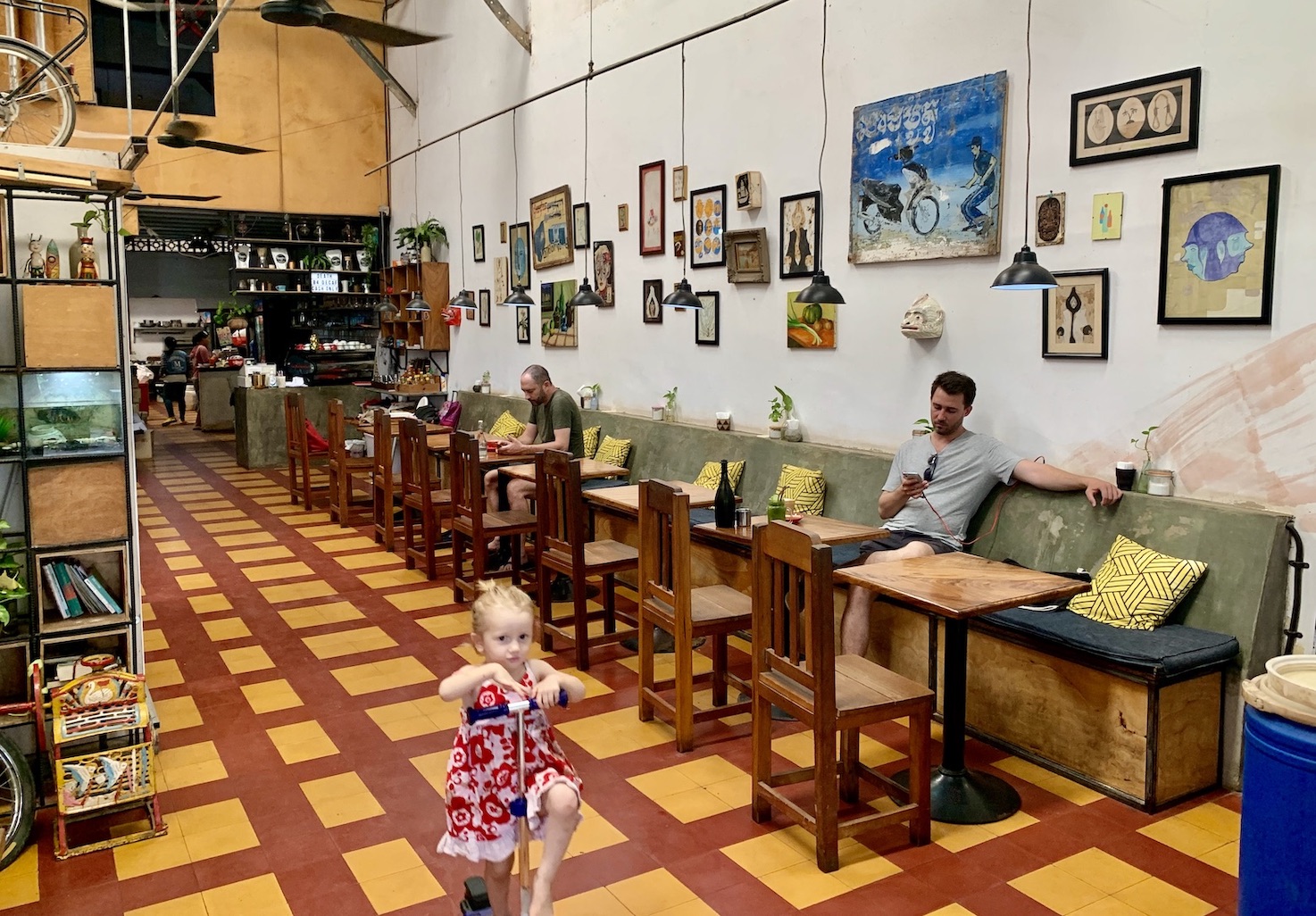 Located on the main road to Kep, away from the huddled cluster of cafes and restaurants in the old town, Cafe Espresso quite literally stands apart from the crowd. Immediately, I found myself surprised by the size of the place.

Passing through the leafy garden, with its wooden benches and tables, we entered a space so large and lofty that it brought to mind a renovated aircraft hangar!

“It was an abandoned salt storage warehouse” explains Angus Whelan, a bearded Australian who runs Cafe Espresso with his wife Kiara. “We moved here in 2016 after starting out in one of the narrow shophouses in the old town”. 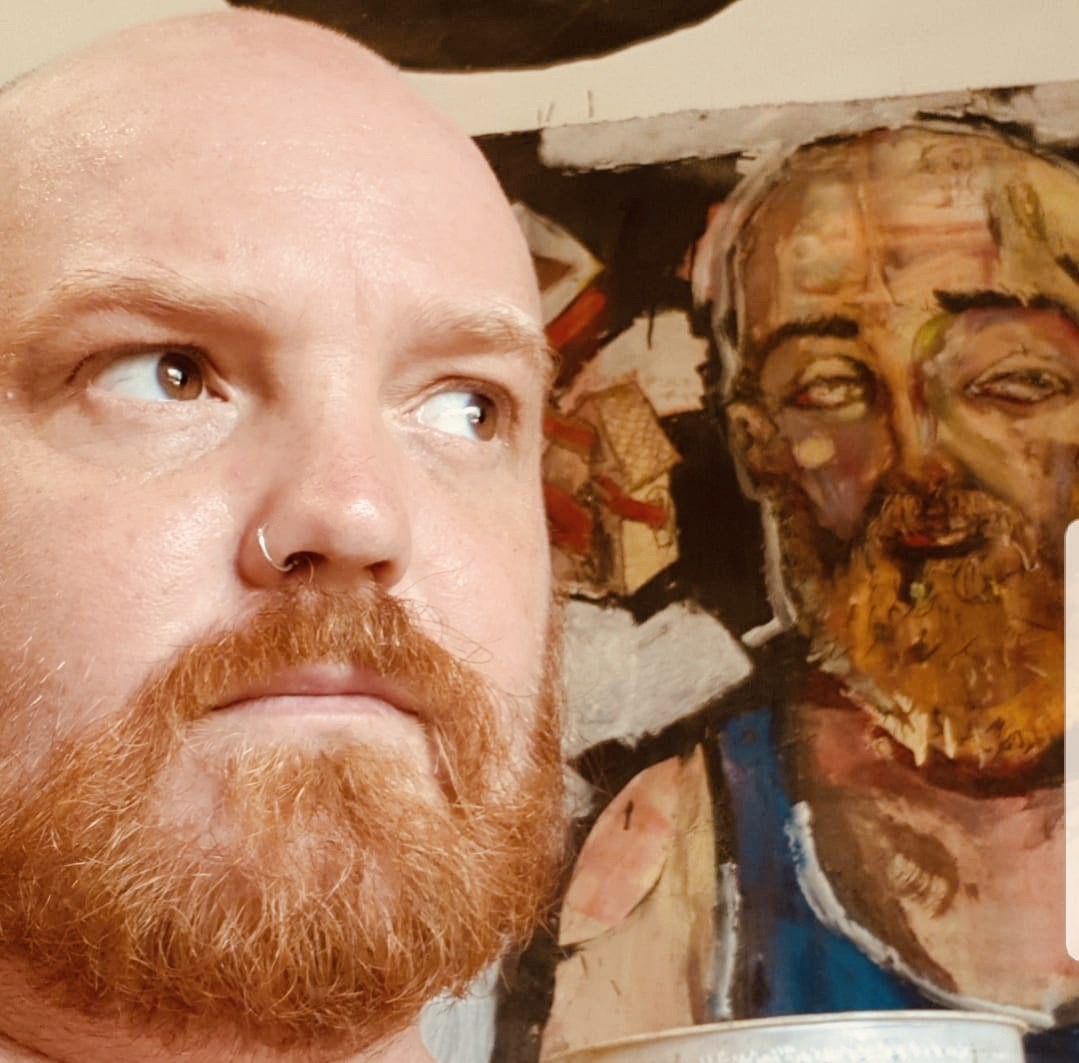 The cafe actually dates back to 2011 when Angus and Kiara decided to make Kampot their base following extended periods of travel around South East Asia. 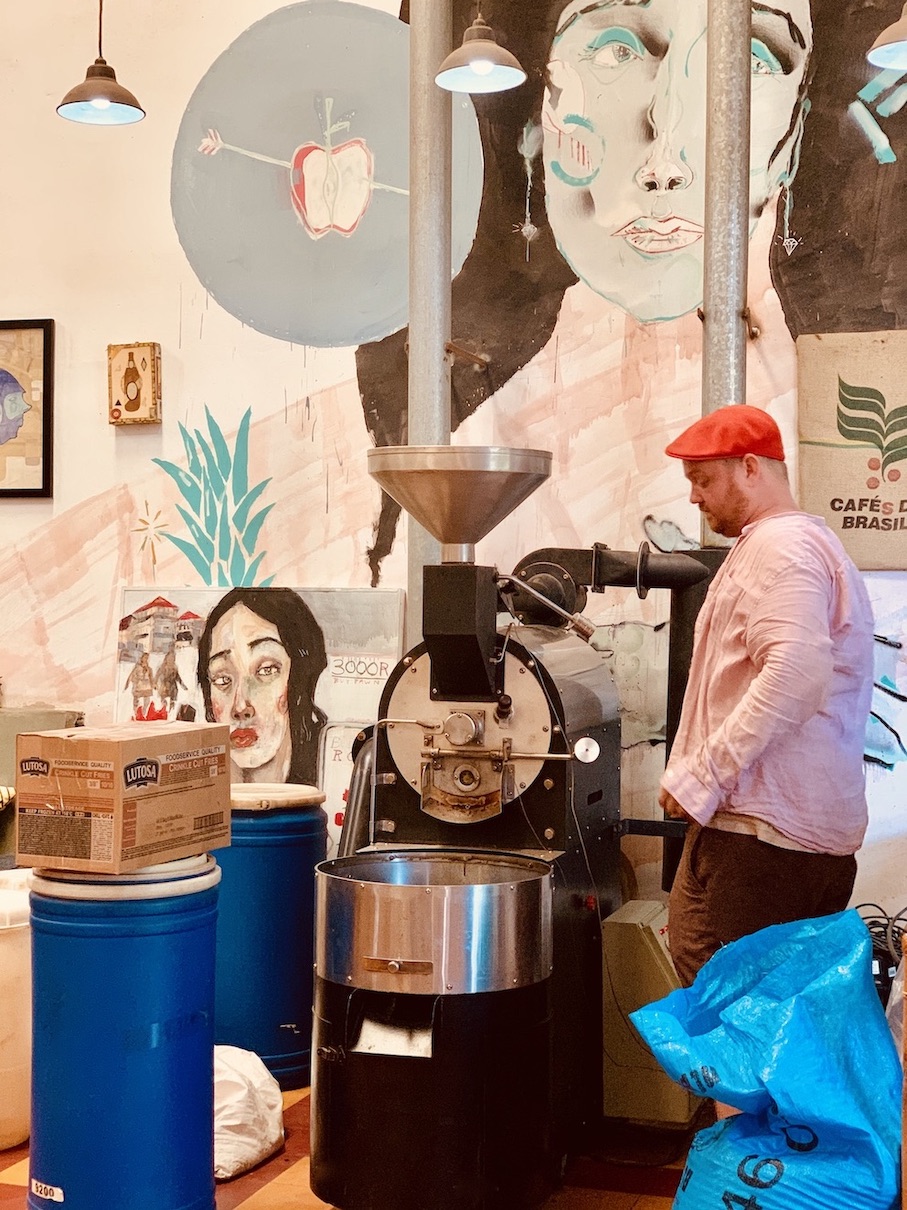 One hell of a grinder.

Impressively, they roast their own coffee in-house, using high quality beans sourced from all over the region. Look out for the giant coffee grinder right on the shop floor, custom made in Vietnam to scale up the roasting. 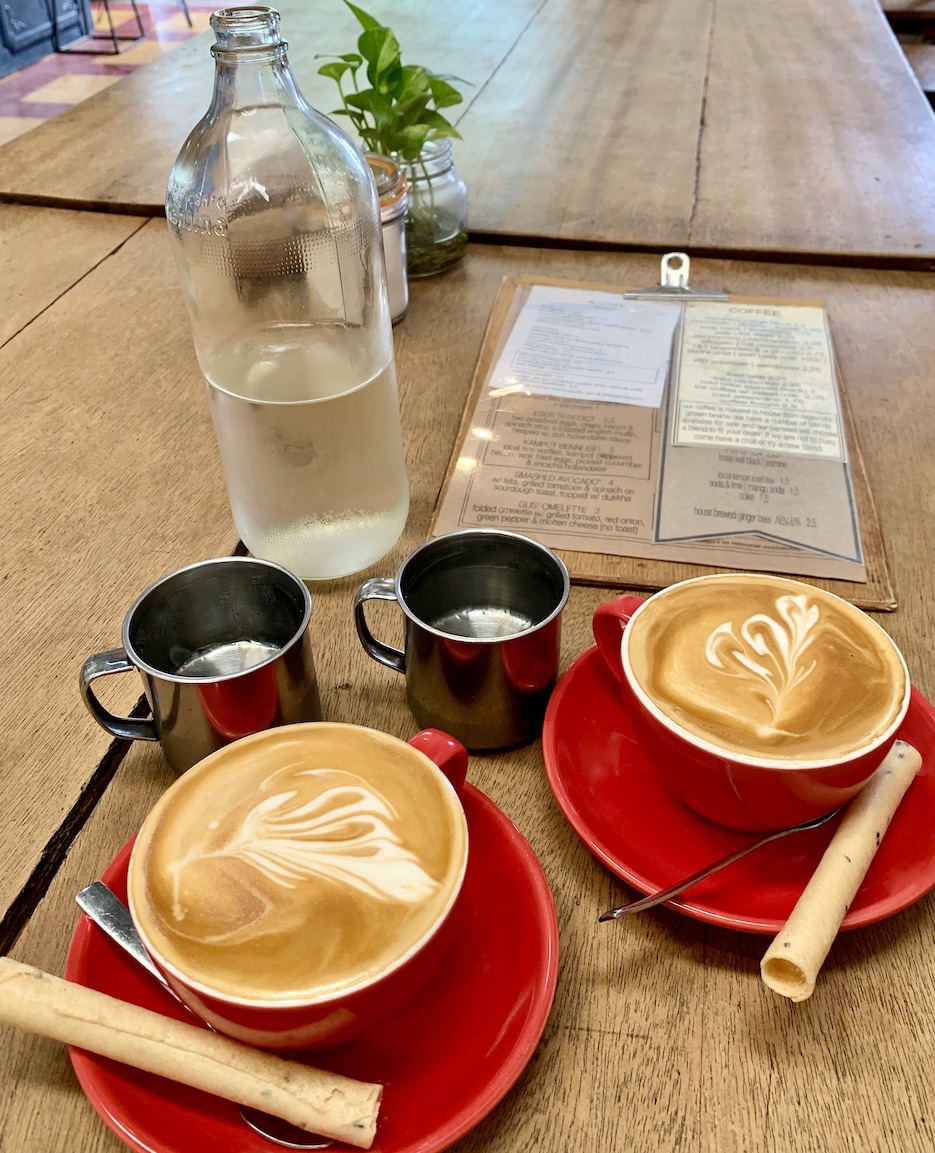 A pair of creamy lattes.

On that first visit we went for a couple of creamy lattes. Both were beautifully presented and served in matching red cups and saucers, along with complimentary crunchy wafer treats. The ice cold water was certainly appreciated too on what was a typically sweltering Kampot afternoon. 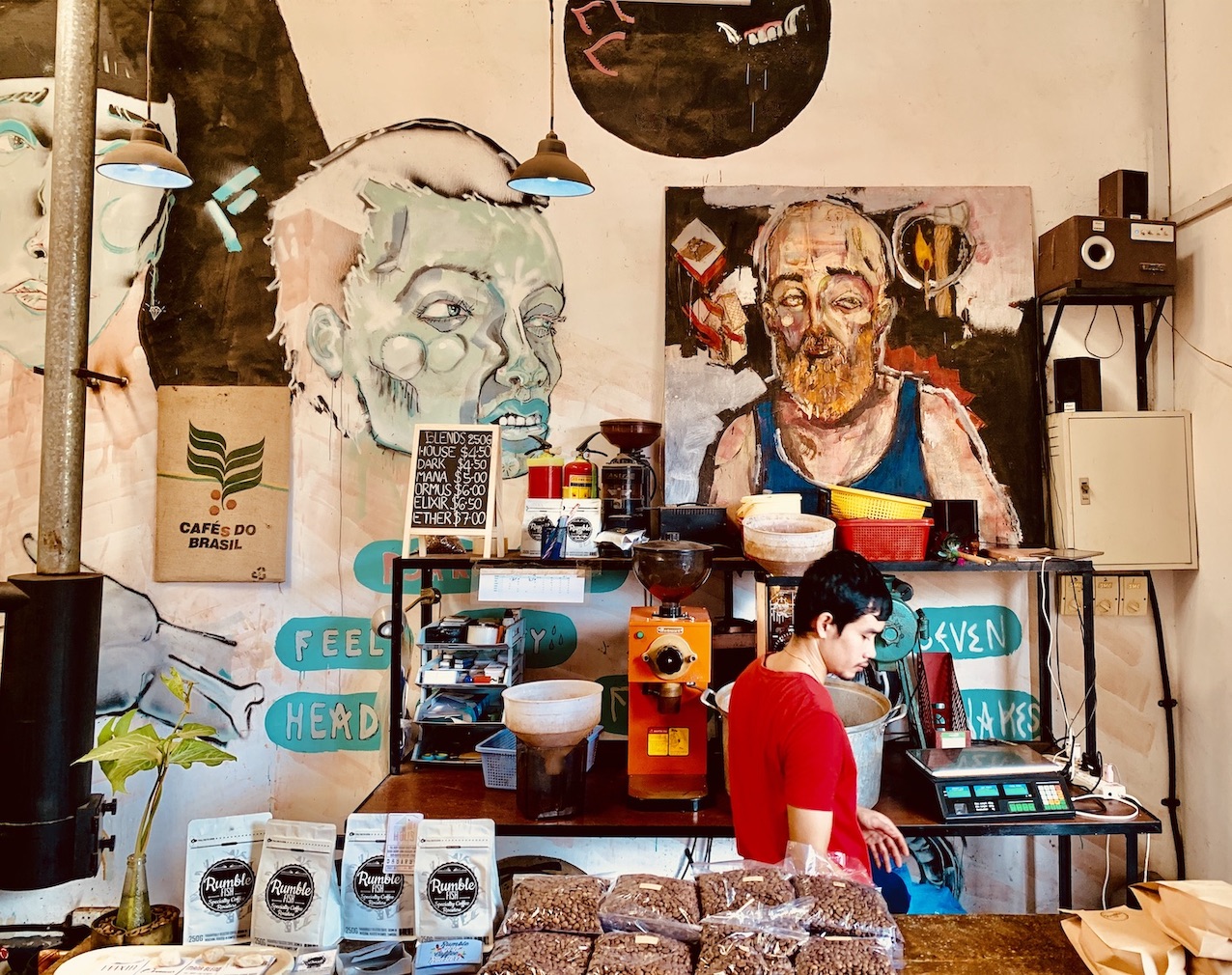 Cafe Espresso’s house blend is called Rumble Fish. You can pick up a bag from the counter by the entrance to the interior. It’s a full-bodied blend with relaxed acidity and notes of black cherry, dark chocolate and ripe citrus. Angus named his coffee after his favourite movie, the 1983 drama Rumble Fish directed by Francis Ford Coppola. 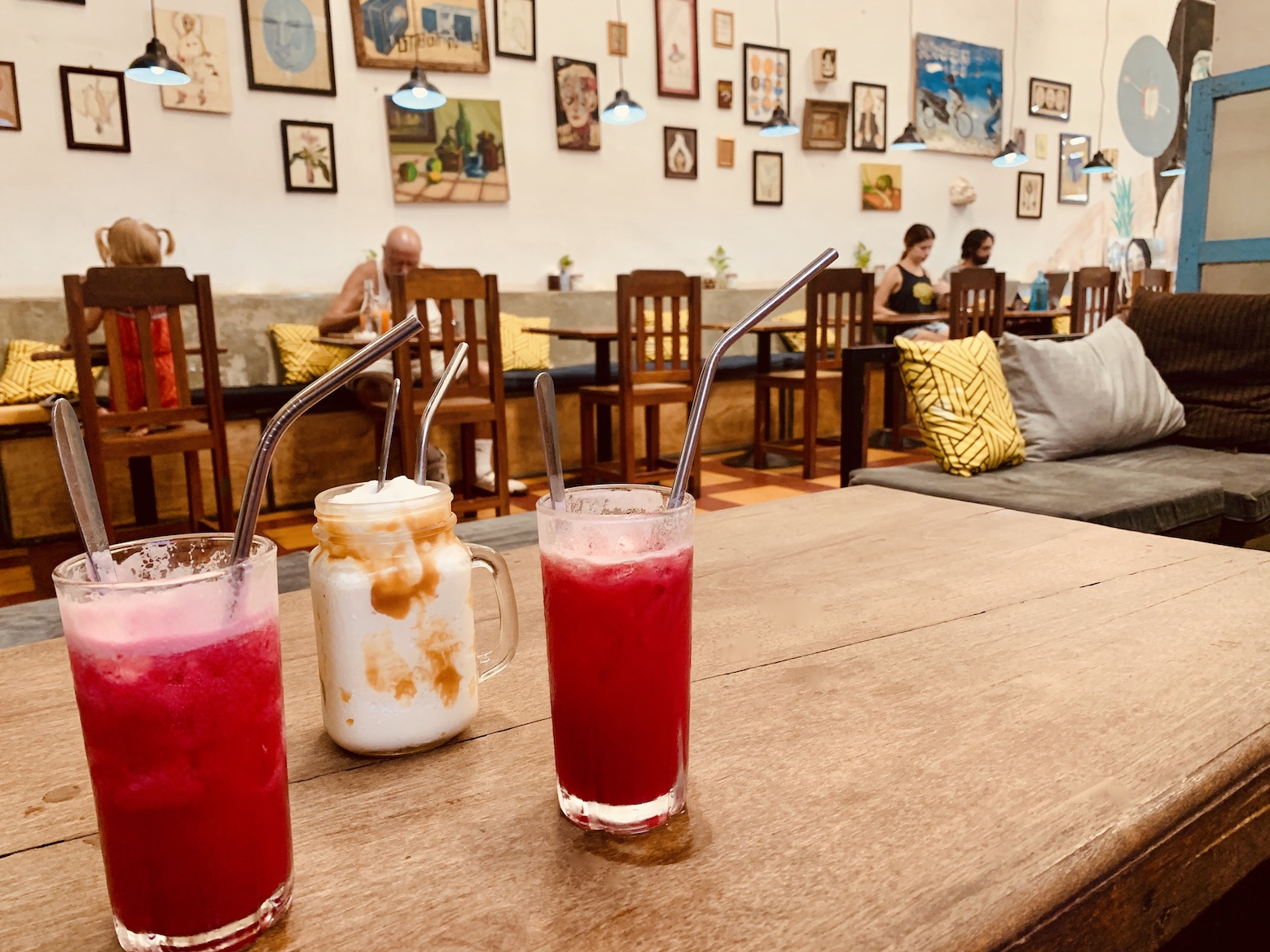 Not into coffee? Fear not, there are plenty of other drinks to enjoy. Over time, we got to grips with the various fruit shakes on offer. I also loved the old fashioned salted caramel milkshake.

However, for me nothing beats the Monster Shake, a mammoth concoction made up of ice cream, milk, chocolate syrup, caramel and candy sprinkles. The rim us coated with Nutella and yeah, there are wafers, chocolate bars and an Oreo jammed in for good measure. According to Angus, it’s particularly popular with Cambodians who come to get a Monster Shake selfie. #instaworthy 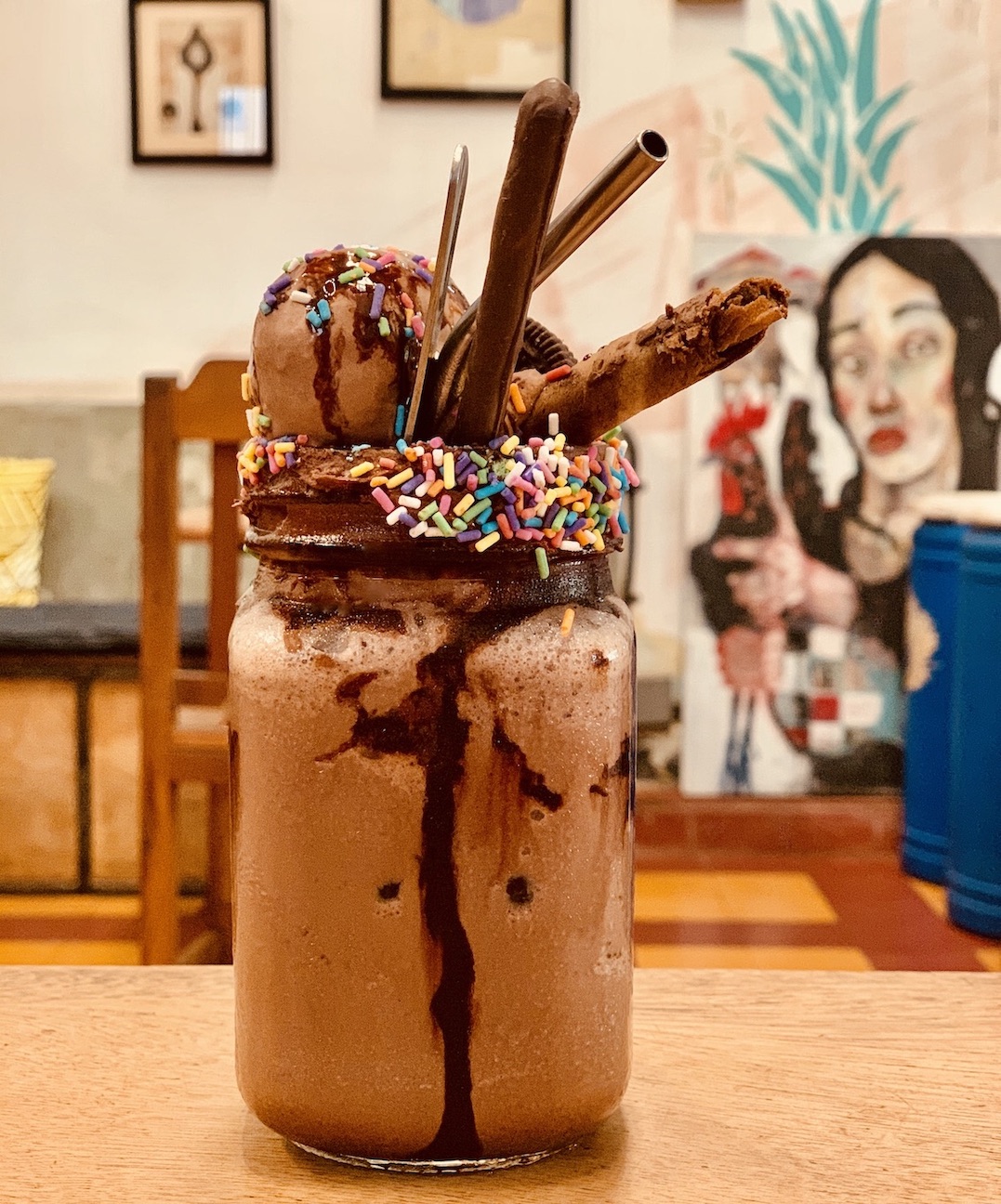 Regarding food, Cafe Espresso strives to bring the tastes of urban Australia to this sleepy corner of provincial Cambodia. “Tuck into our Eggs Benedict” says Angus, “then close your eyes, you could be in any major city in Australia”. 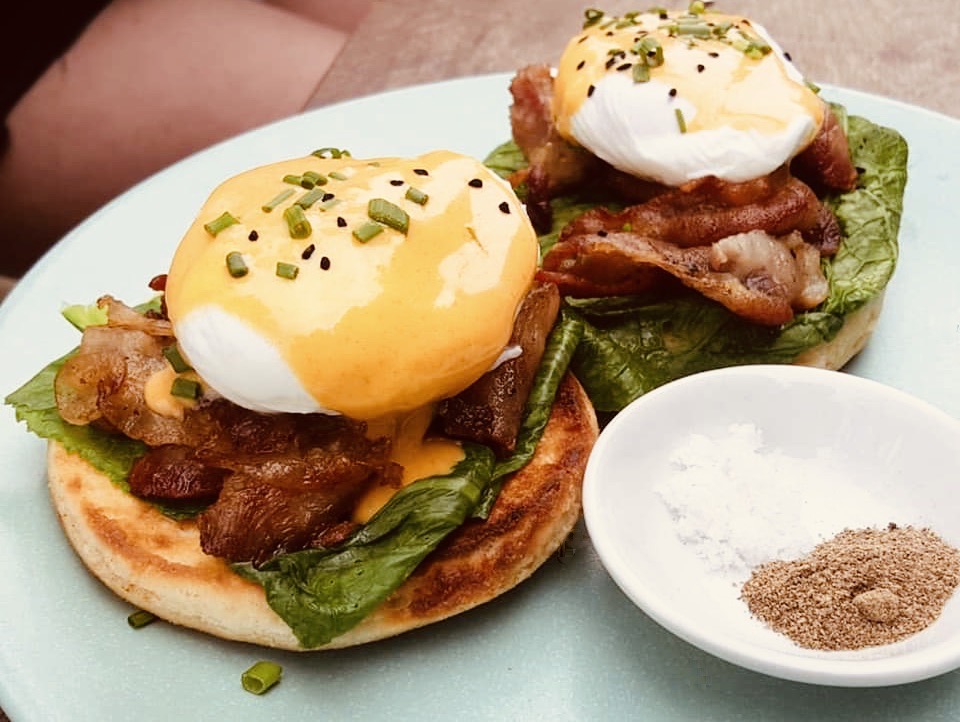 There are plenty of other culinary delights. From the handful of visits we made during our two months in Kampot, we tried the Huevos Rancheros, the OG Omelette and the Cubano Grilled Sandwich with roast pork, cured ham, Swiss cheese, mustard and pickles. 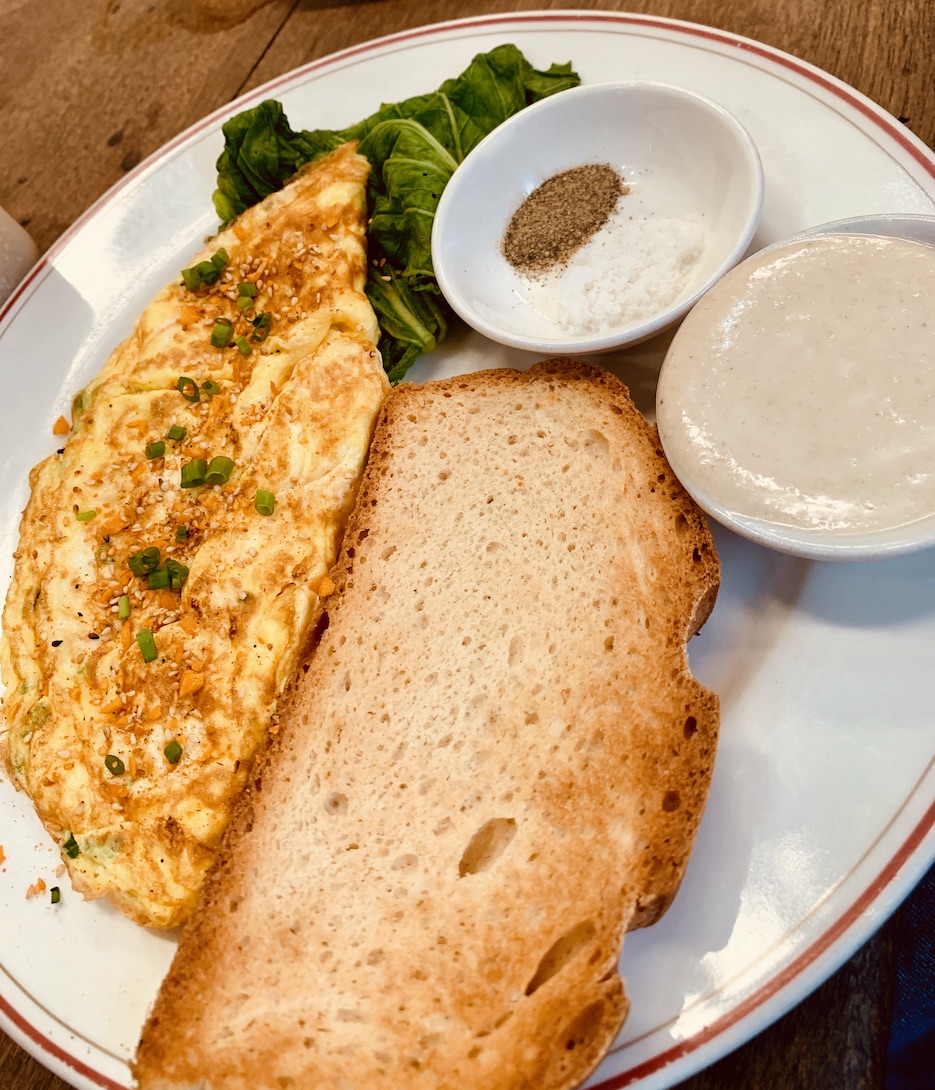 In addition to great food and drink, Cafe Espresso is a decent place to sit and work. The WIFI is great, it seems to draw a relaxed crowd and the eclectic music put a smile on my face. Furthermore, there’s a genuine family feel to proceedings. In fact, you may see Angus and Kiara’s two daughters playing hide and seek or whizzing by on scooters. 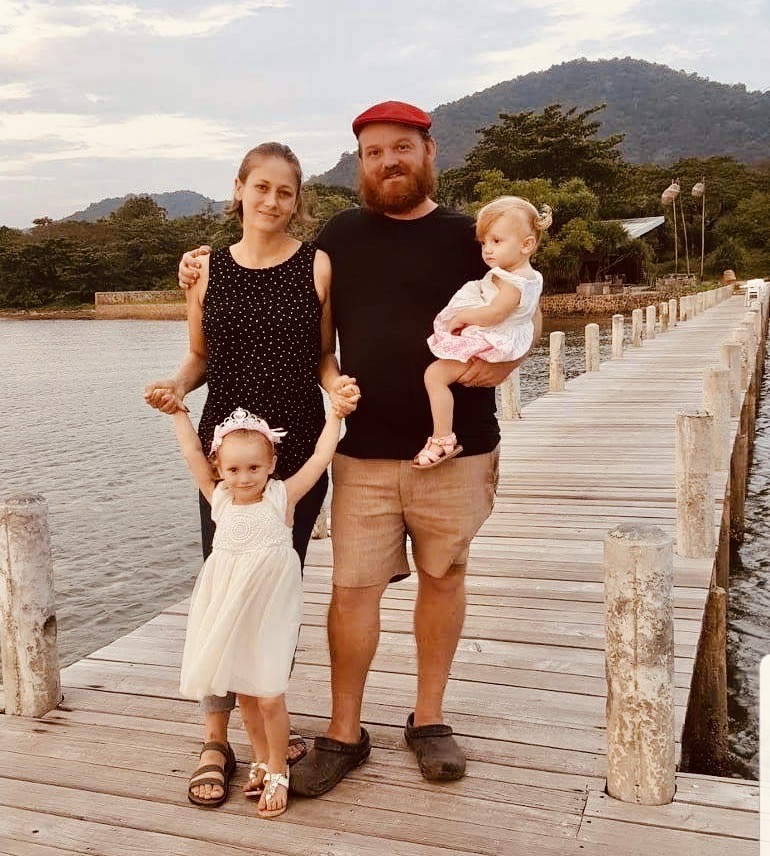 In their younger years, back in Australia, Angus and Kiara held market stalls selling antiques, knick-knacks, trinkets and vintage clothes. “I have always collected, scavenged and treasure hunted what I could find” reveals Angus. Many of these bits and bobs, along with treasured life possessions, decorate the cafe, accentuating the homely feel. 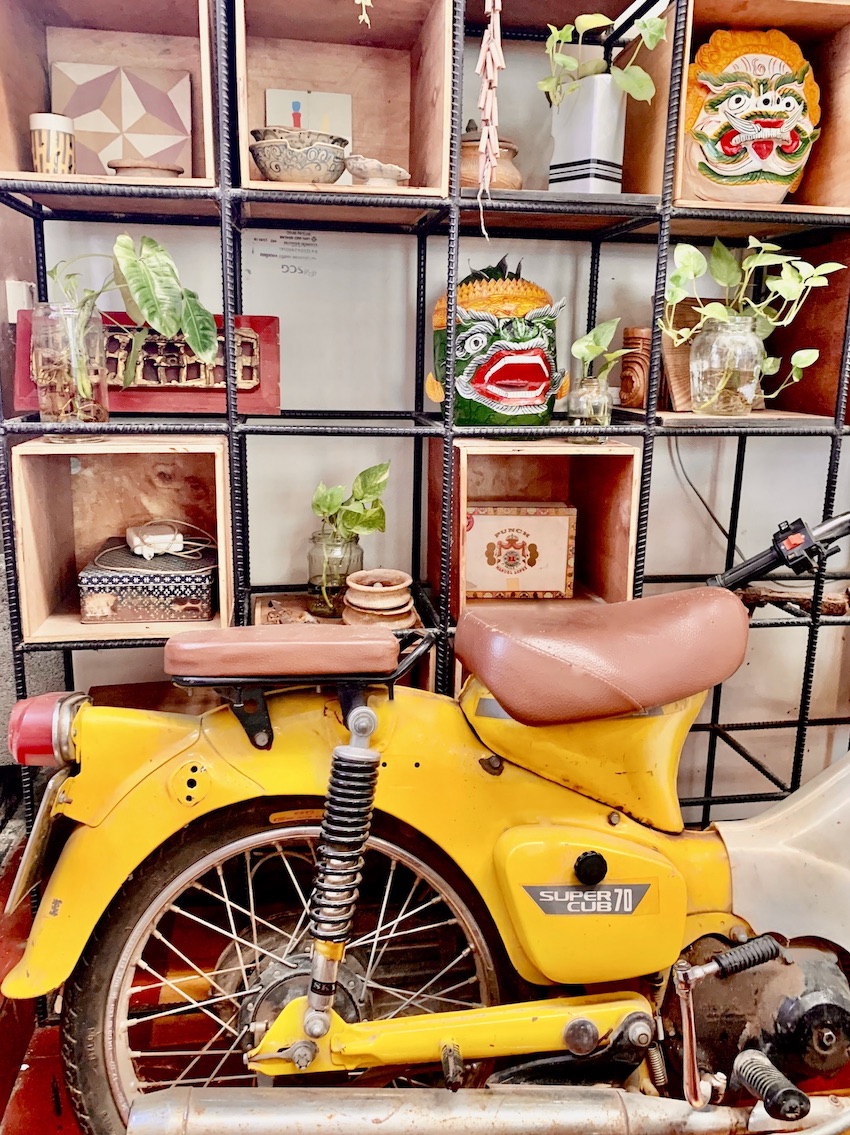 There’s lots of art too, including paintings by friends and a few pieces by Angus himself, who used to be an artist. Furthermore, his brother contributed a sprawling mural. “We were on a tight budget” admitted Angus, so the visual side of the place just evolved naturally over time. 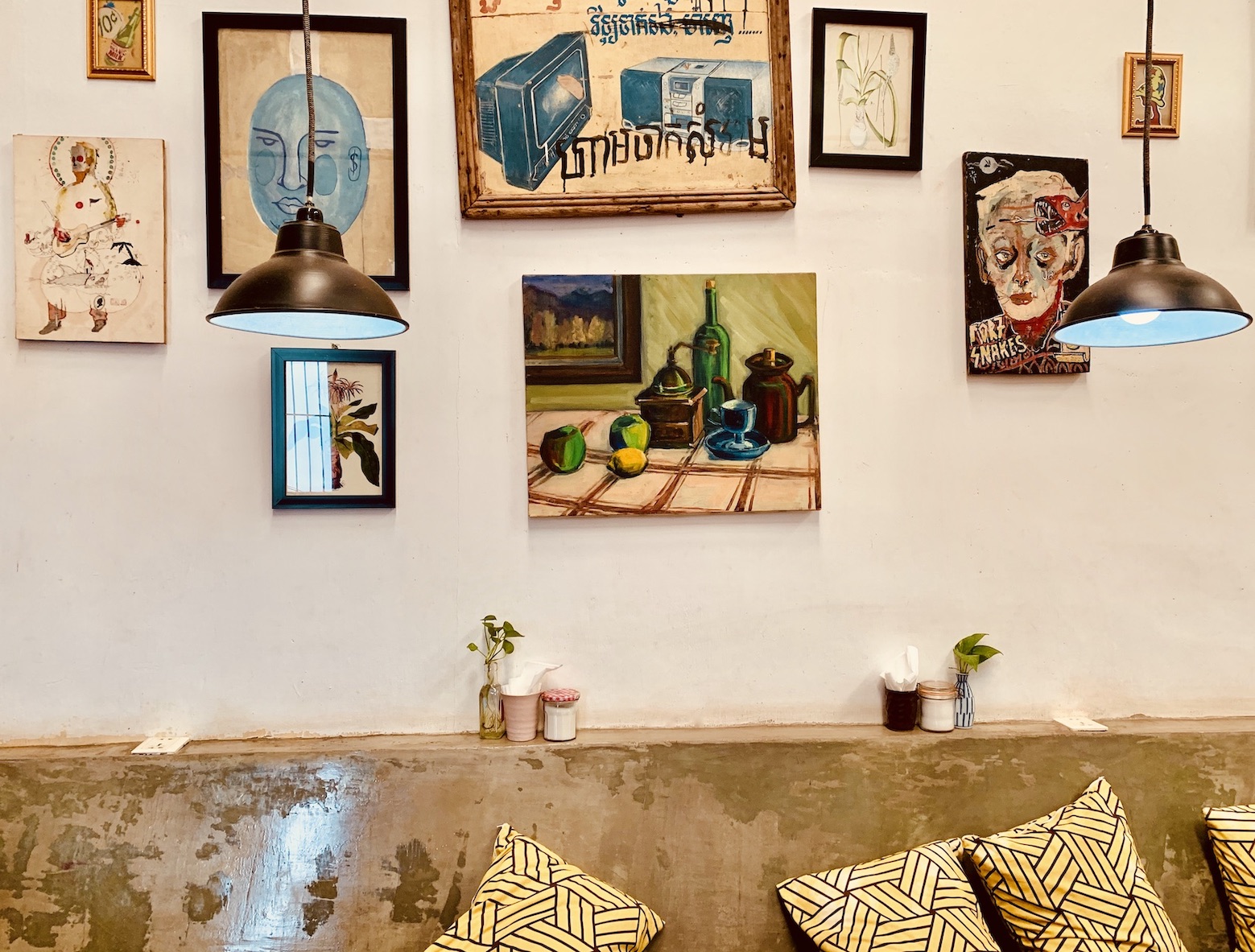 Cafe Espresso seems to be ticking along ok in spite of the pandemic. “Domestic tourism is on the up” says Angus. “So we’ve had to adapt to a new market, scale back in some areas”.

Something tells me this place is gonna be alright in the long run. Especially when things get back to some shade of normal towards the end of the year. If you do find yourself in Kampot, I’d highly recommend swinging by. Taste that Rumble Fish for yourself, maybe tackle the Monster Shake. For the latest news and to get in touch with the team, here’s their Facebook page.