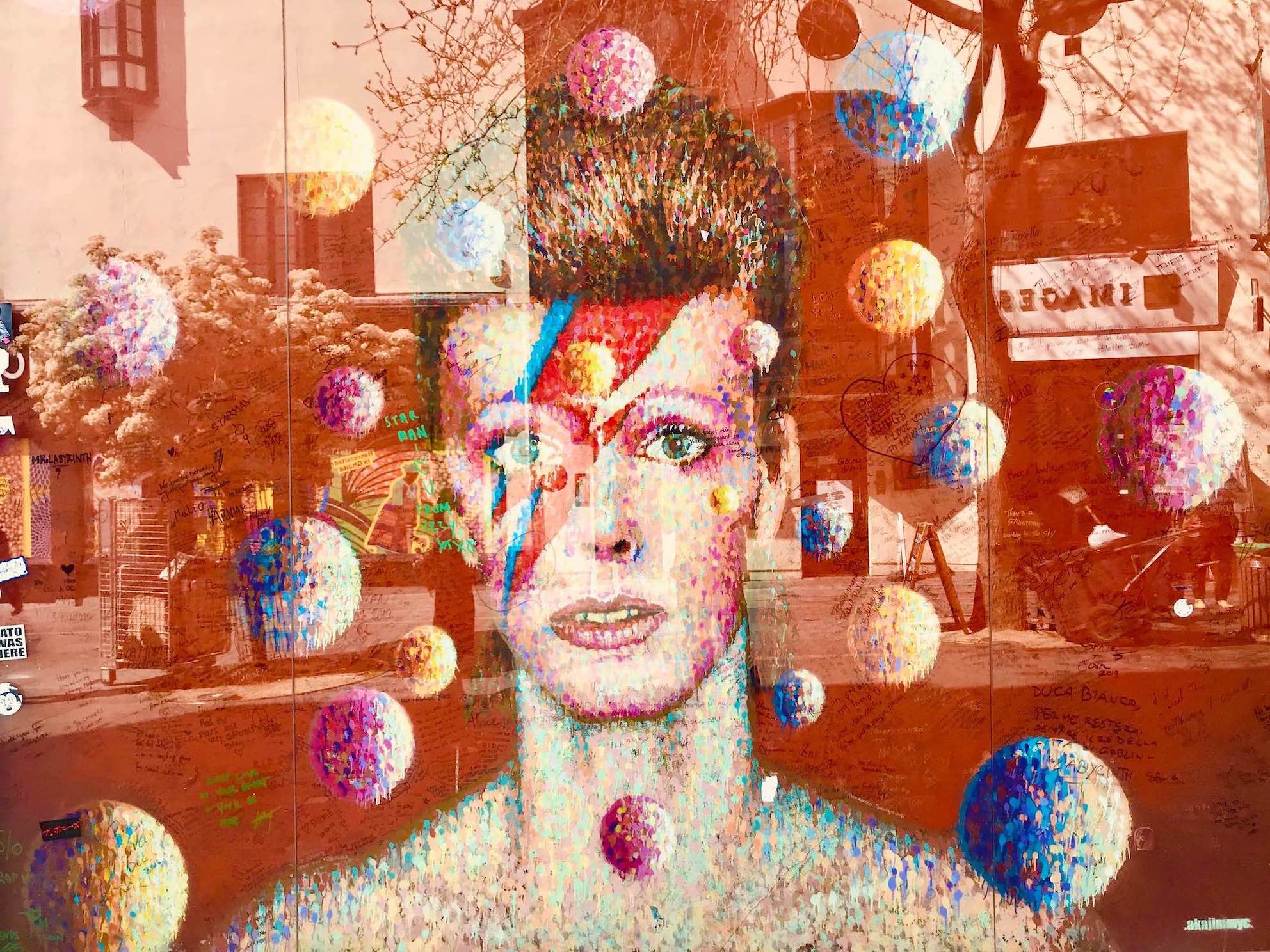 I didn’t get into David Bowie until I was in my early thirties. In fact, I’m not sure how his unbridled brilliance escaped me. Obviously I knew who he was and had become familiar with a handful of his biggest hits. But it wasn’t until I bought his 1969 self-titled second album that I began thinking… hang on a minute… I’m starting to see what all the fuss is about. 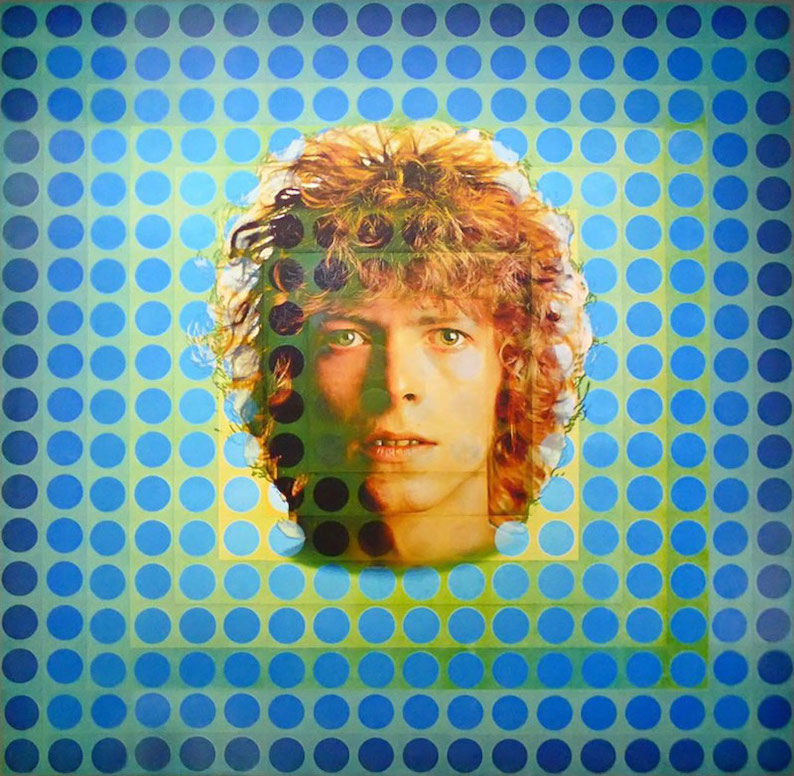 Thus, over the next five years or so, I gradually worked my way through his entire discography. In chronological order naturally, to get a feel for how The Thin White Duke evolved with the times and moved from one startling transformation to the next. By the time I’d taken in his final album, the incredibly moving Blackstar, I realised I needed to go back and mop up that first record I’d skipped in the beginning. 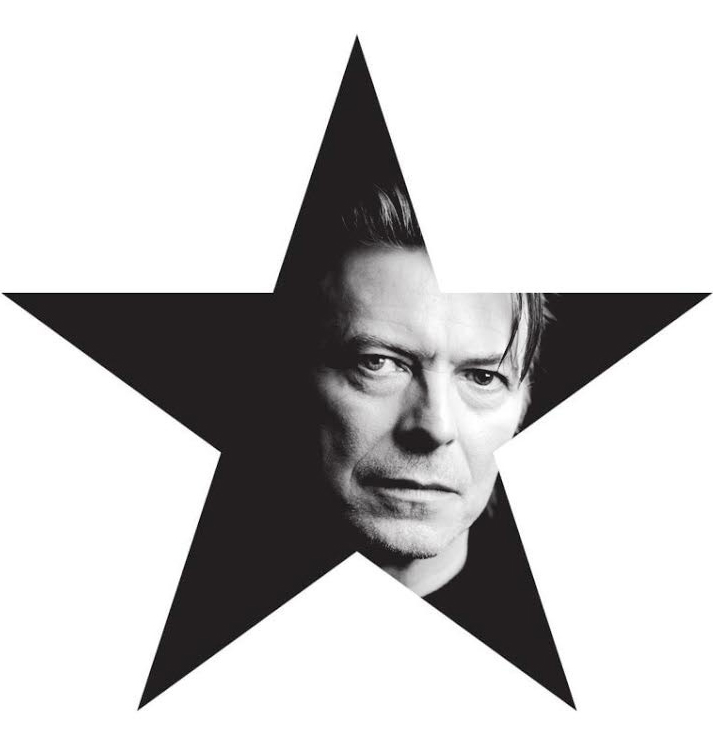 Bowie’s albums ended up soundtracking my travels around The Netherlands, China, Spain and Scotland. He now stands among my top ten solo artists. A fearless, groundbreaking singer-songwriter whose work I often return to when a certain album fits my mood. Hence when I heard there was a memorial mural to the great man in London, I knew I had to go and take a look. 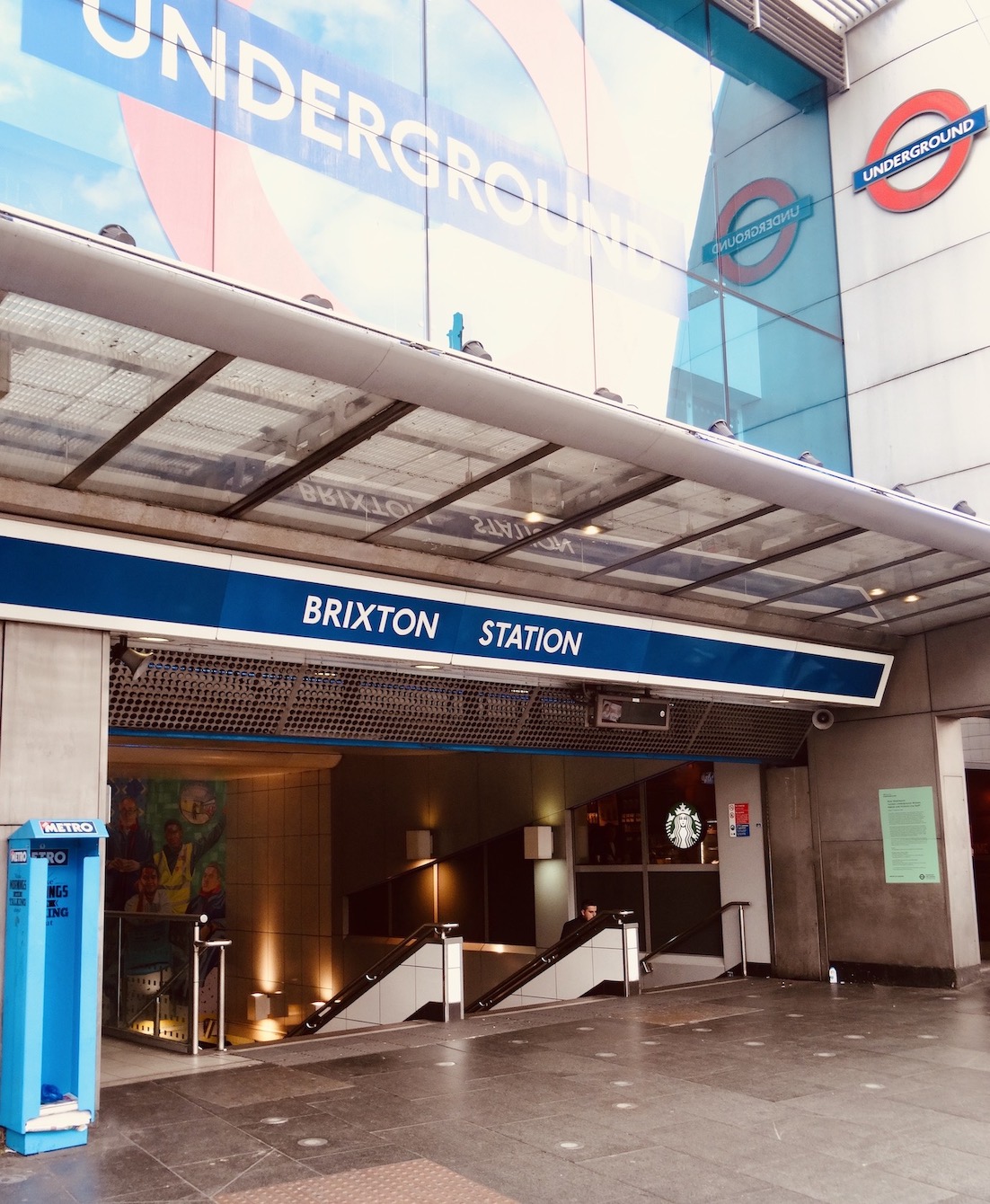 On the way to the David Bowie Mural in London.

I’d never been to London’s Brixton neighbourhood. Consequently, it felt like a genuine adventure as I emerged from Brixton Tube Station and paused for a moment to get my bearings. As it turned out, the mural couldn’t be easier to find. Indeed you’ll see it right across the street occupying a side wall of Morley’s Department Store on Tunstall Road. 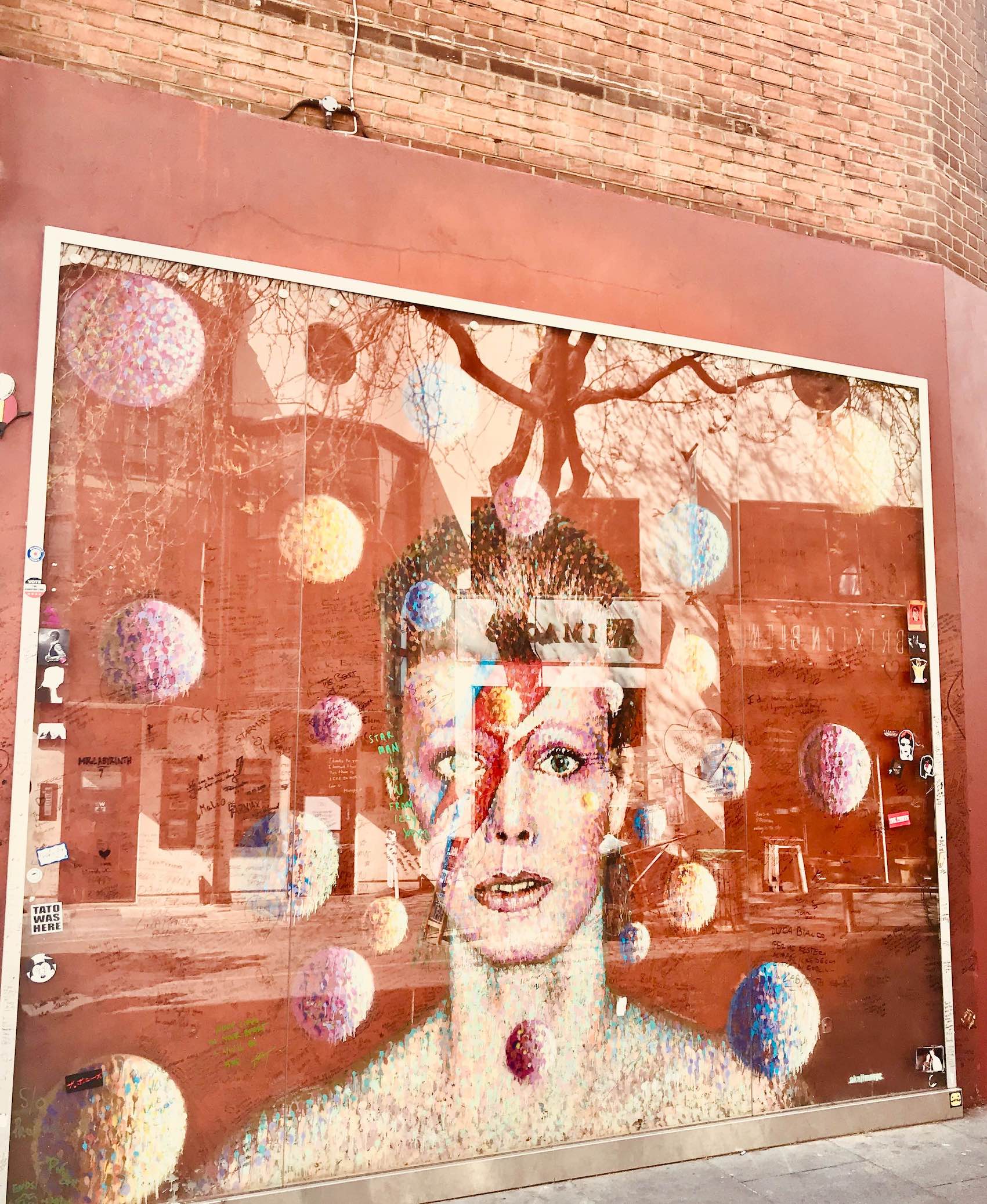 This stunning piece of artwork sprang from the mind and hands of the artist Jason Cochran, aka Jimmy C. He created it in 2013 to coincide with several London-based Bowie exhibitions, including The Many Faces of David Bowie at The Opera Gallery. 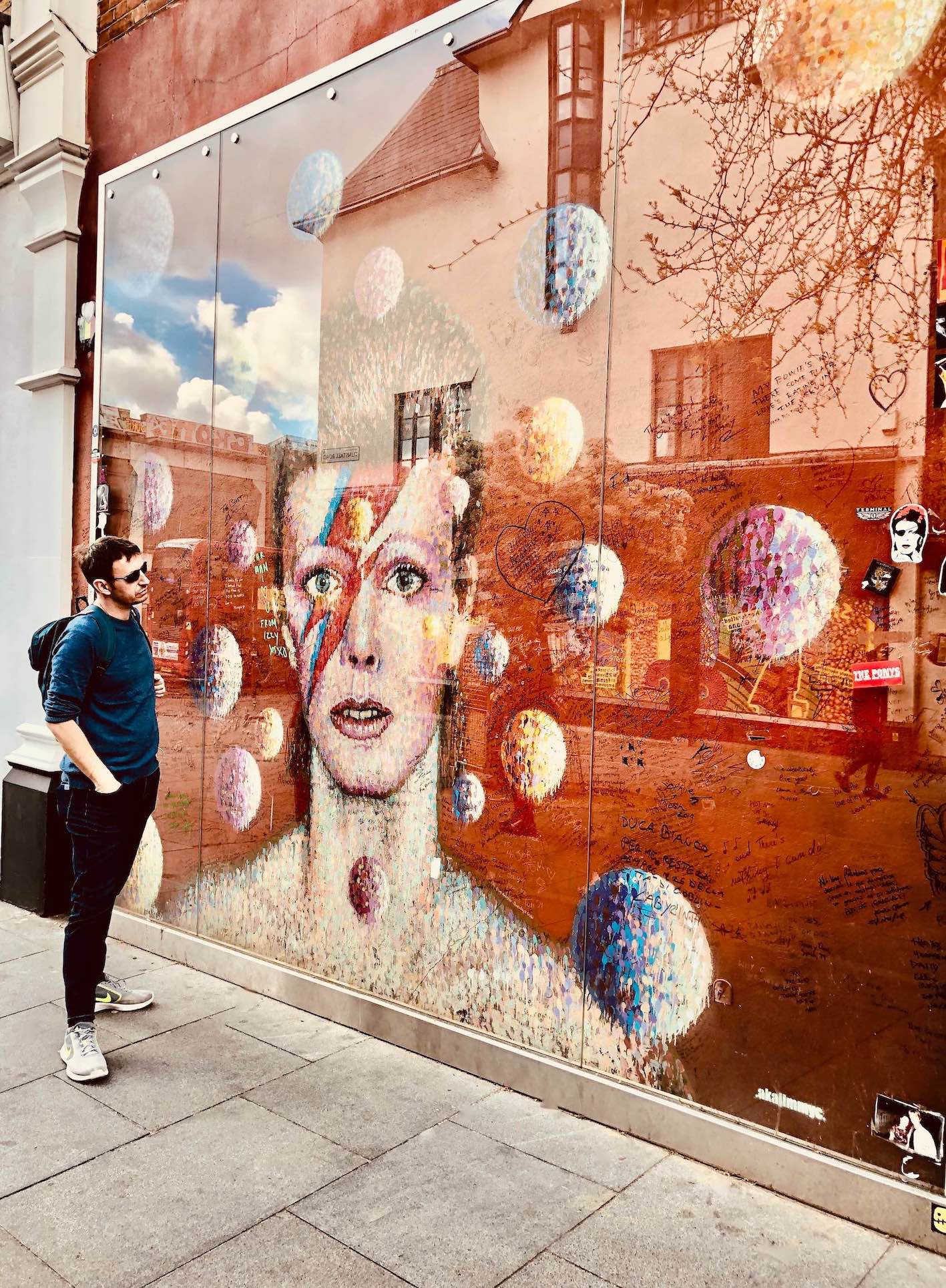 Cochran’s mural took inspiration from the cover of Bowie’s 1973 album Aladdin Sane. The image, which shows Bowie as his alter ego, Ziggy Stardust, is one of the defining photographs of the singer’s career. Vibrant and defiant, the lightning bolt across his face stands as a powerful representation of duality.  A symbol that stood strong throughout his work and public image.

The cover, Cochran explained, lends itself well to his style, known as aerosol pointillism. Which is basically the technique of making large pictures from thousands of small dots of spray paint.

The mural became an instant hit with locals and tourists alike. And, according to several online articles, was even responsible for an injection of fresh interest in Brixton as a neighbourhood.

“You Didn’t Die, You Just Went to Sleep One Day”.

However, when the news of Bowie’s unexpected passing broke in January 2016, Cochran’s mural suddenly became the focal point of a nation’s grief. Thousands of Bowie fans flooded into Tunstall Road bringing flowers and gifts. Furthermore, many began scribbling RIP messages right onto the mural itself! 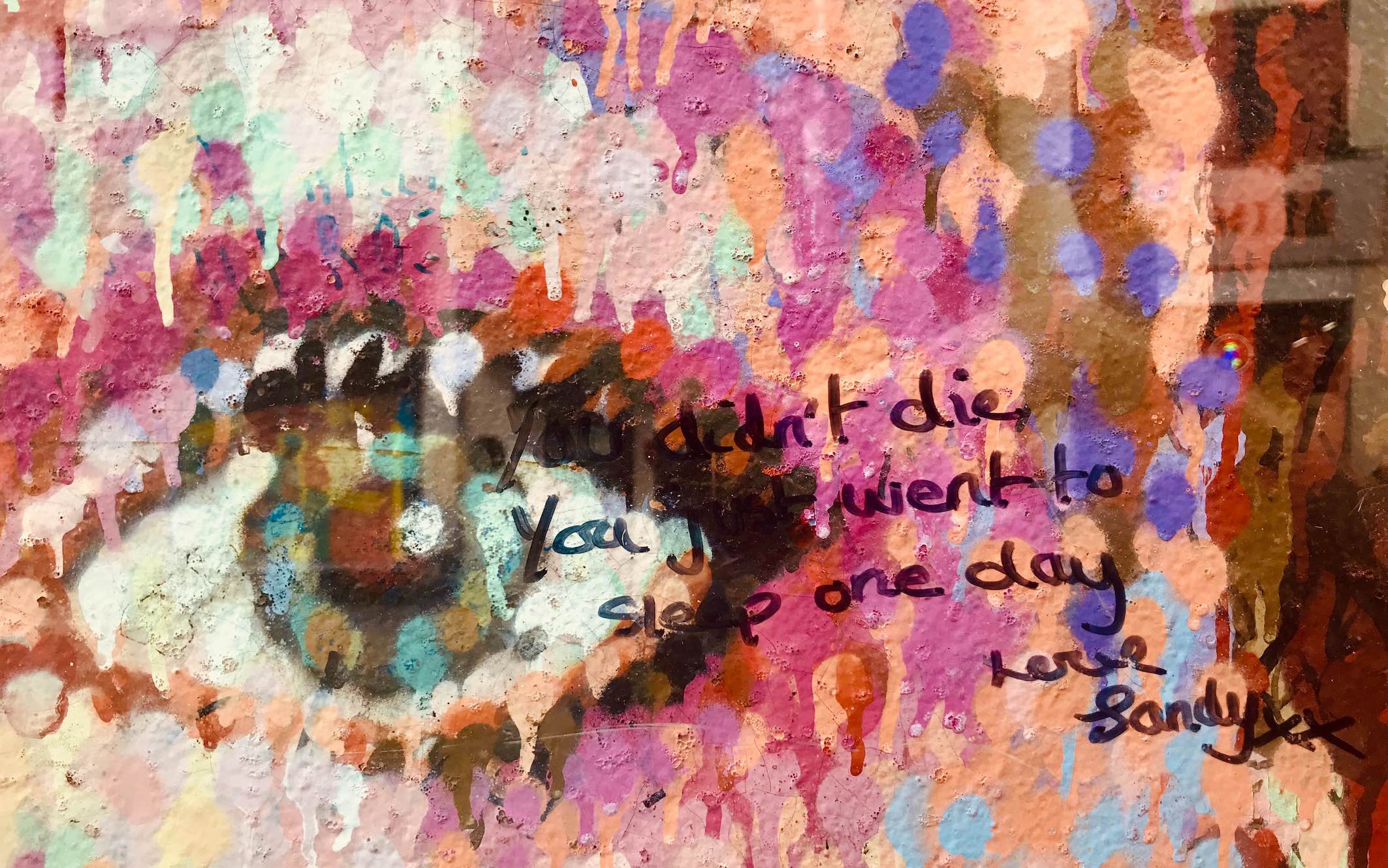 It took just a day for fans to cover the mural in graffiti, quite literally from top to bottom. As a result, Cochran had to repaint the entire thing, while the local council subsequently covered the art with a perspex protective cover. 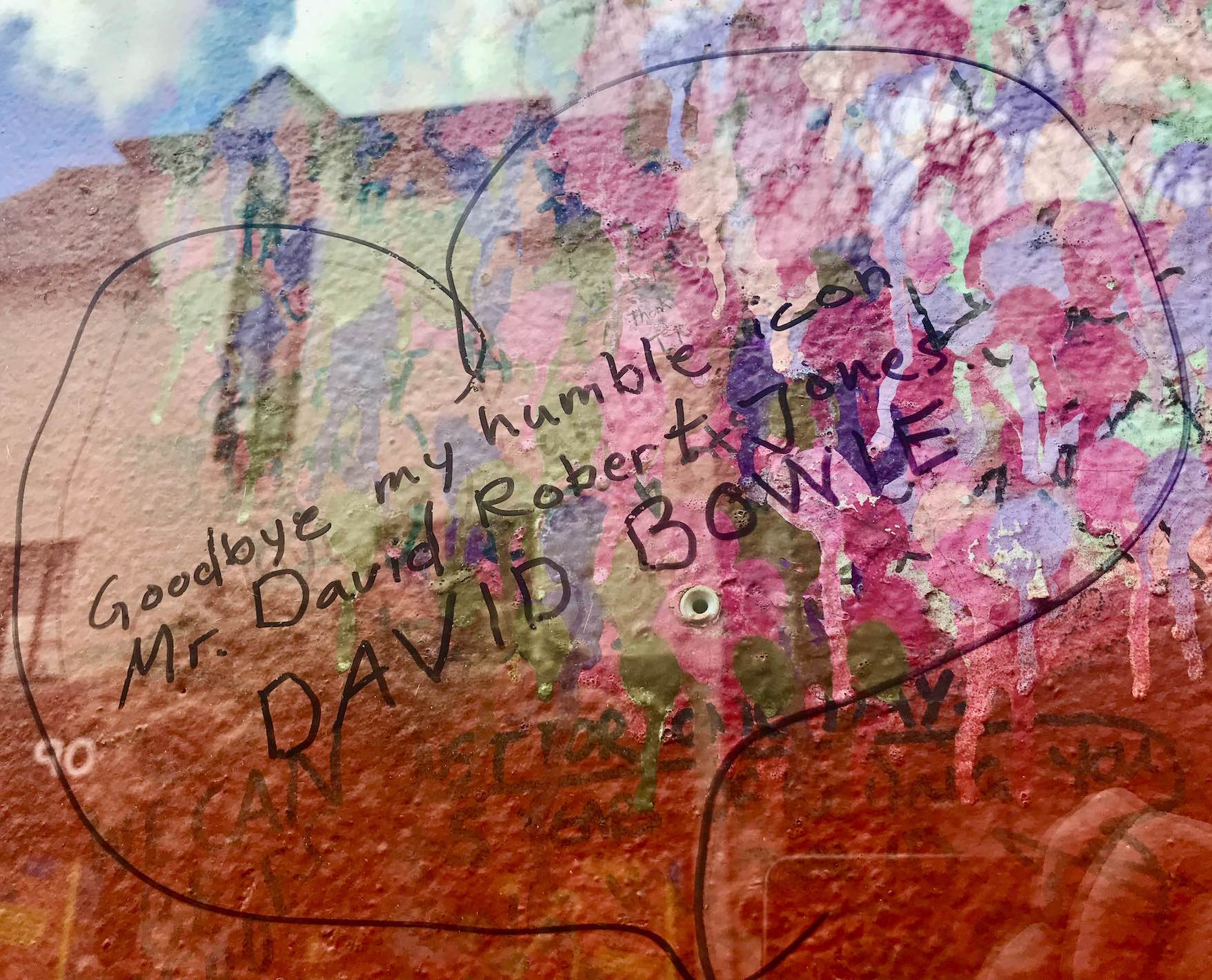 Cochran says he had no issue at all with fans graffitiing the mural. “I’m honoured people are using my work as a shrine” he said. “His death was an incredible loss to the world, but it’s amazing to see all the positive responses. And how the mural has brought people together”. 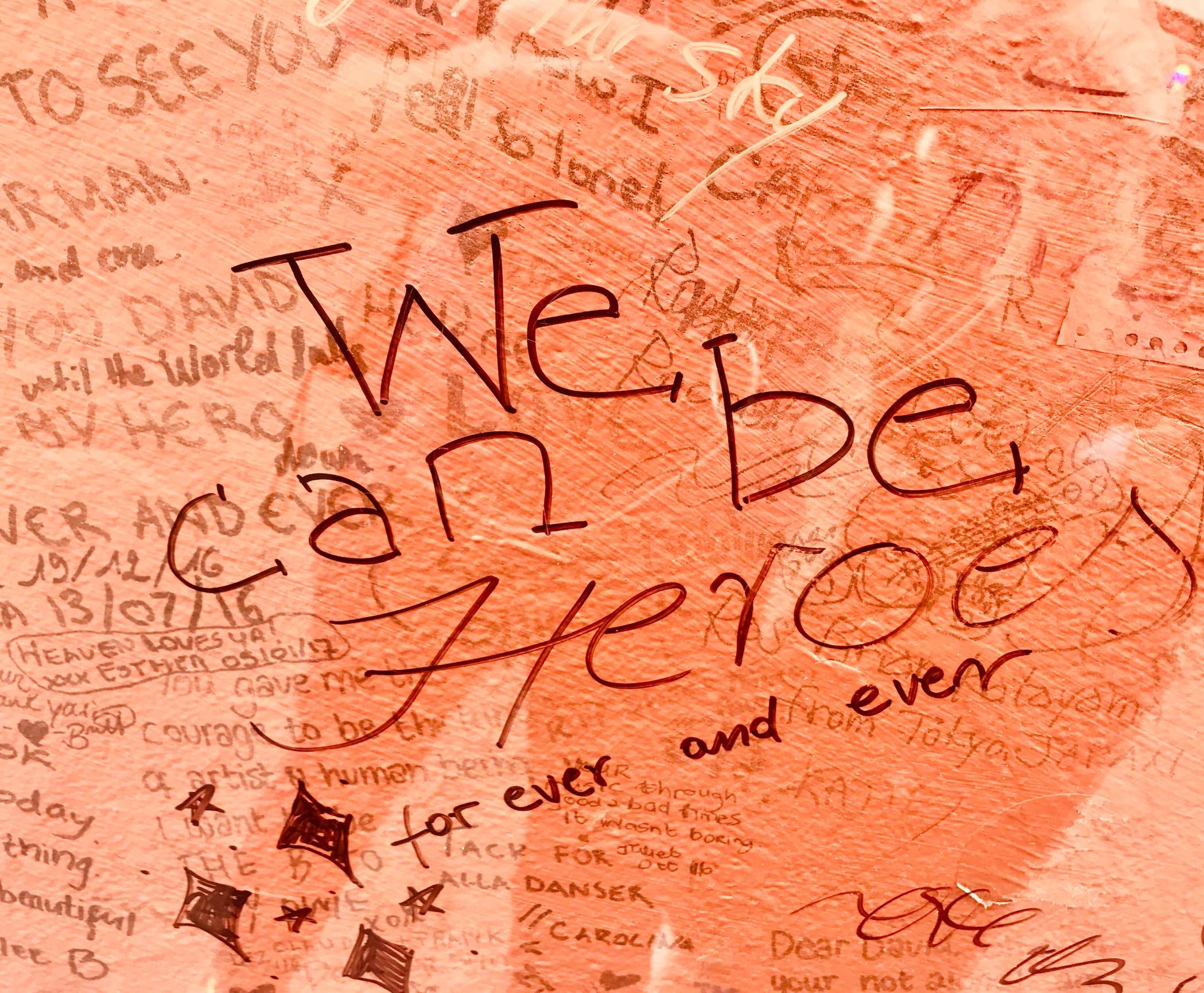 Indeed I soon found myself lost in the sea of tributes, song lyrics and quotes sprawled across the cover. “We can be heroes!” exclaimed one. “You’ve got five years, but we’ve got a million years to remember you” cried another. Perhaps most touching of all is a fan photograph, which somehow made its way inside the perspex cover. 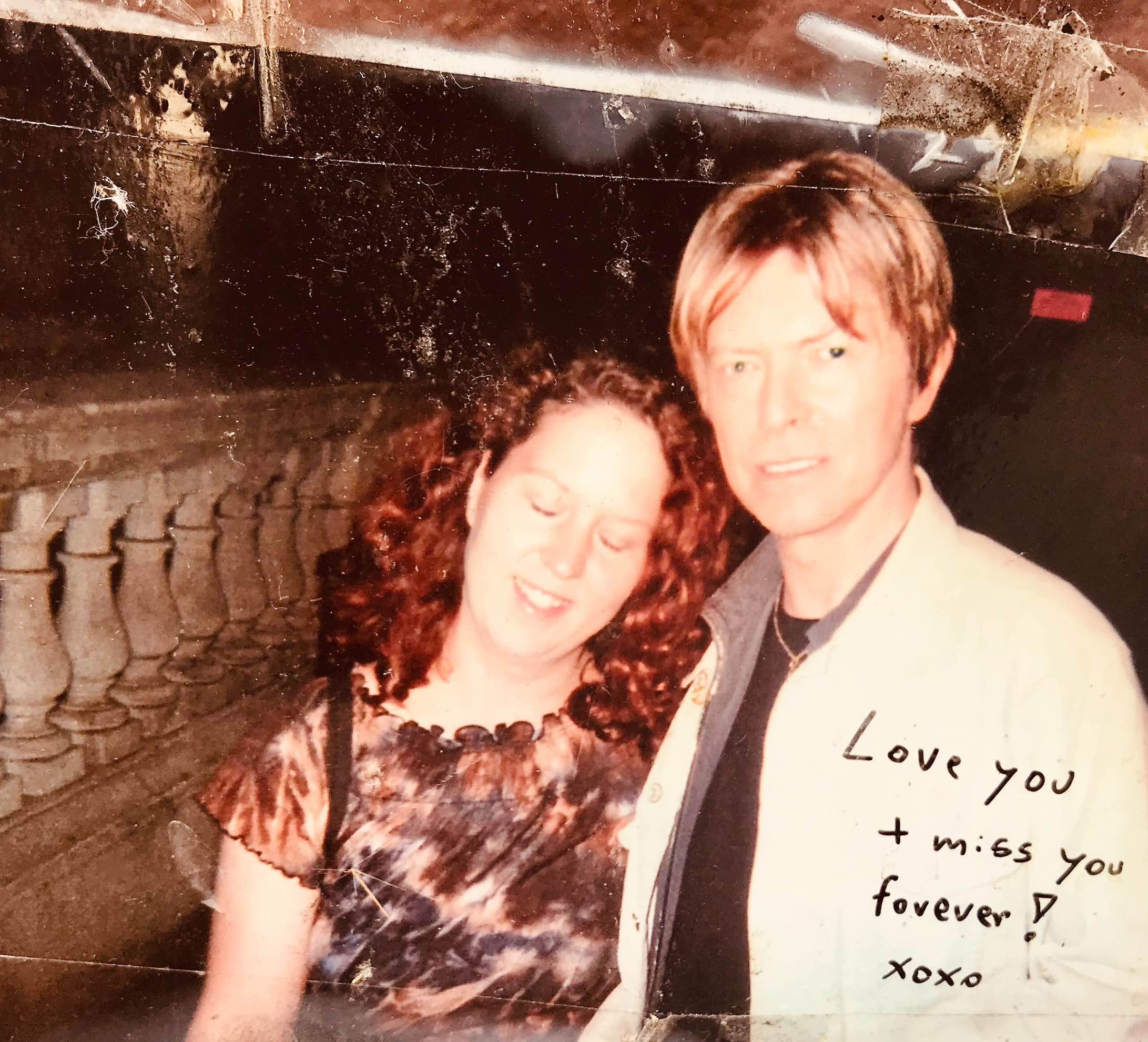 I was also pleased to see that a lot of thought went into the mural’s location. Bowie was actually born in Brixton as David Robert Jones on the 8th of January 1947. As if the mural isn’t enough of a thrill, you can also take the short walk to his childhood home on Stansfield Road. It takes just under ten minutes on foot from the mural. 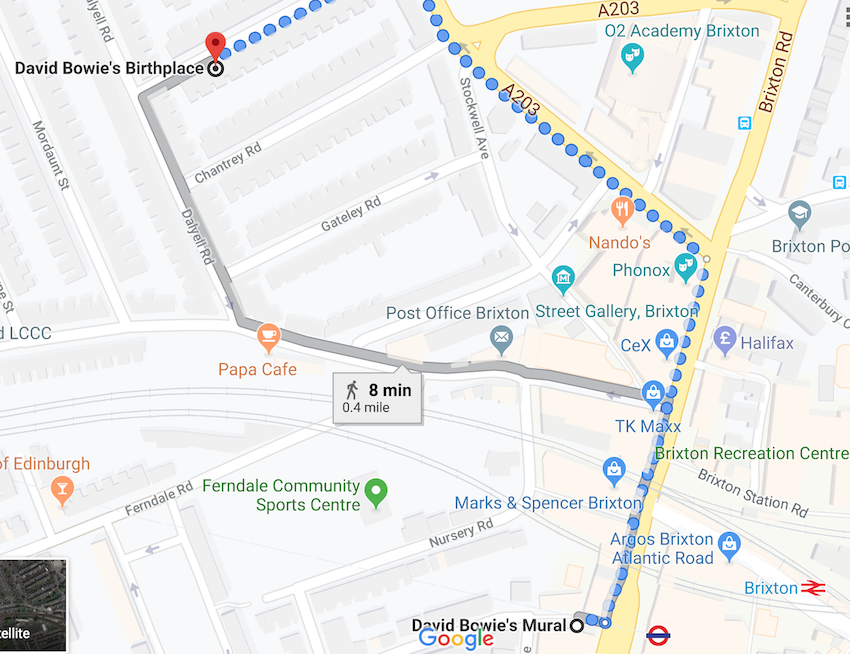 Walking from the David Bowie Mural to his birthplace.

Stansfield Road is a thoroughly unremarkable London street and has changed very little over the years. Unless you know exactly where you’re going, one would struggle to find the house where Bowie was born and lived in until he was six years old. 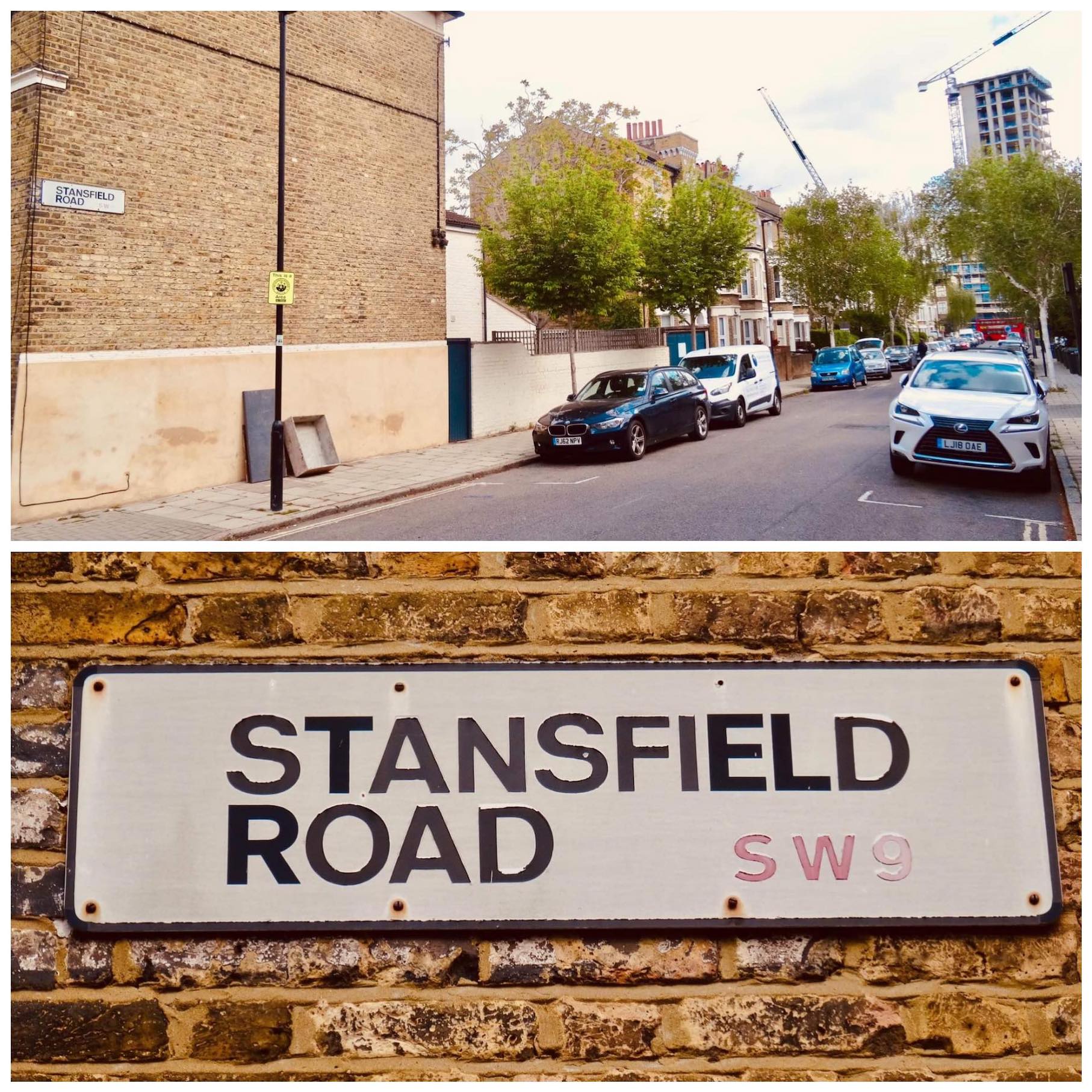 His former family home is number 40. But there is no plaque, no sign… no mention whatsoever of the building’s history. In fact, it looks like the owner has removed the number 40 from the house altogether. No doubt to reduce the attention the building gets. I was struggling to find it when a man walking his dog across the road smiled at me and said, “it’s over there”. That’s when I finally noticed the number 40 on the bin. 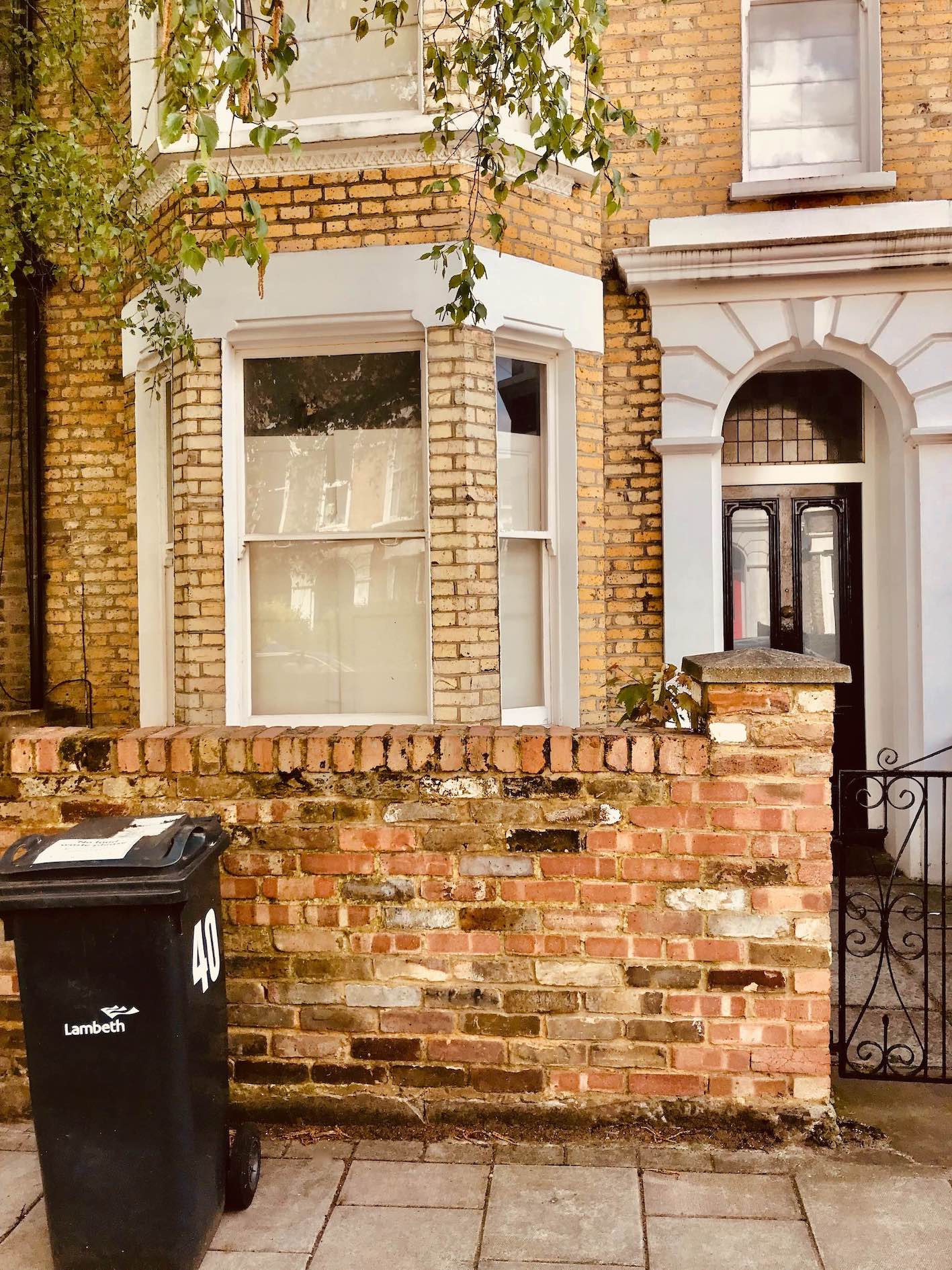 After a bit of online digging I discovered that the house used to be owned by a local man called Martin Stainton. He insists that he didn’t buy the property because of its history and claimed to be largely disinterested in its backstory. Nevertheless, Mr. Stainton did very well for himself with the purchase. Apparently he paid around £270.000 for it back in 2000 before selling it sometime in late 2019 for over £600.000. Not a bad investment.

For another London music pilgrimage, check out my report from Abbey Road.