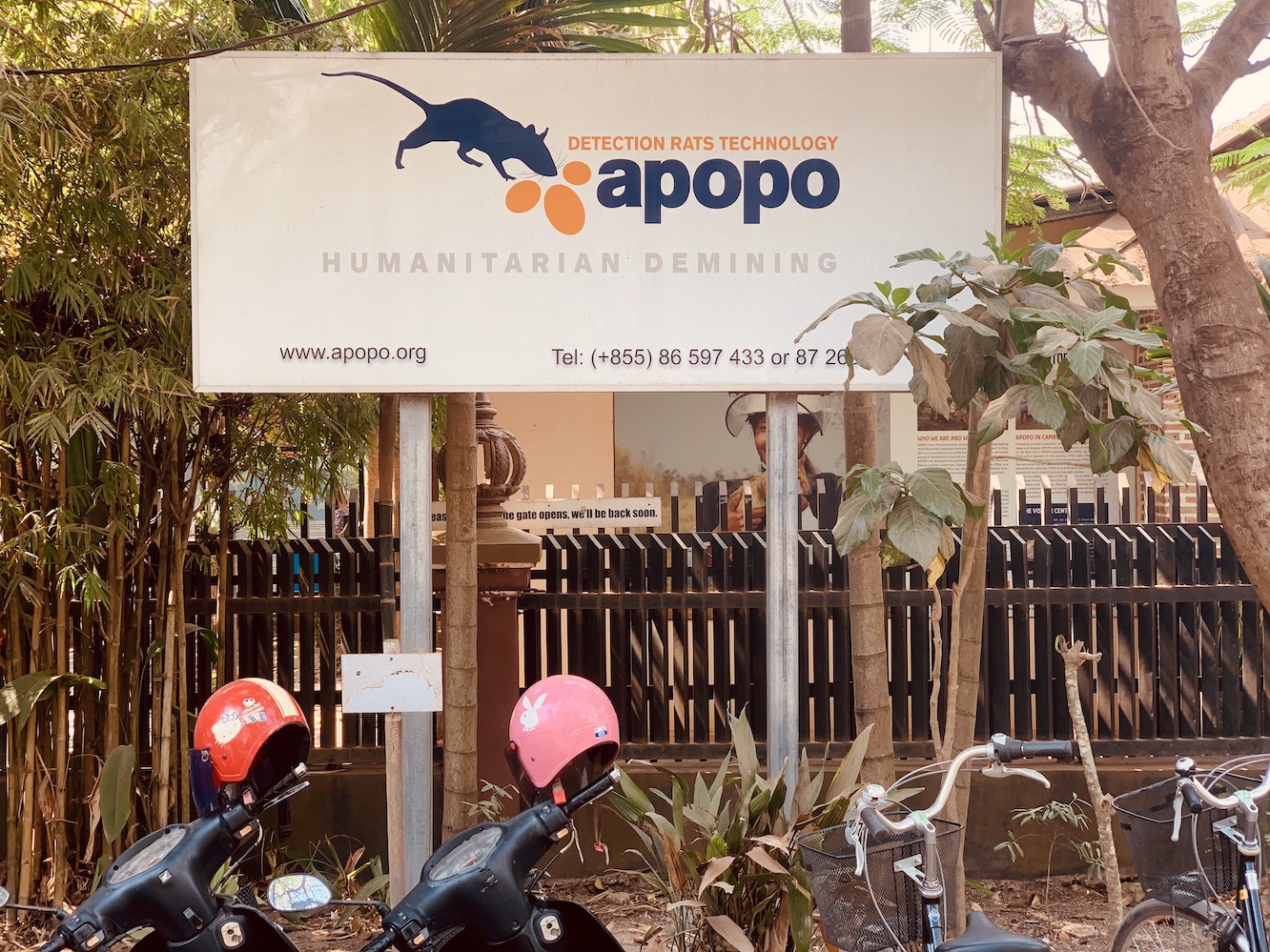 I’ve always tried to seek out unique and quirky travel projects. After all, it would be boring if I was always posting about temples, churches, beaches and museums. Although I have indeed done plenty of that over the years.

Moreover, these more unusual experiences are invariably the most fun to write about. There were ample weird and wonderful sights for Sladja and I during our seven months in Cambodia. In Siem Reap, the award for most eccentric goes to APOPO and their team of lovable, life-saving hero rats. Yes, you read that right: rats that save lives! 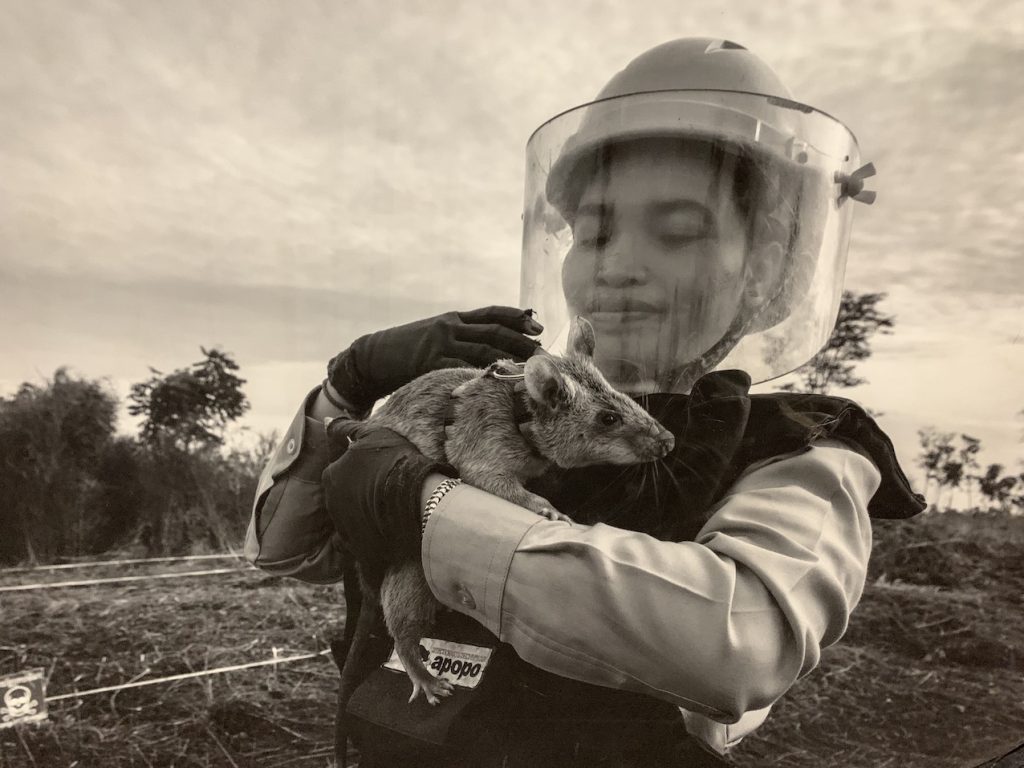 APOPO is a nonprofit organisation launched in the Belgian city of Antwerp in 1997. The geniuses behind the concept were Bart Weetjens and Christophe Cox, who came up with the idea of using rats’ amazing sense of smell to detect landmines.

In 2000 APOPO opened its first rat training centre in Tanzania. As this training and research developed, they also discovered that rats could detect tuberculosis infections far better, not to mention faster, than existing methods! 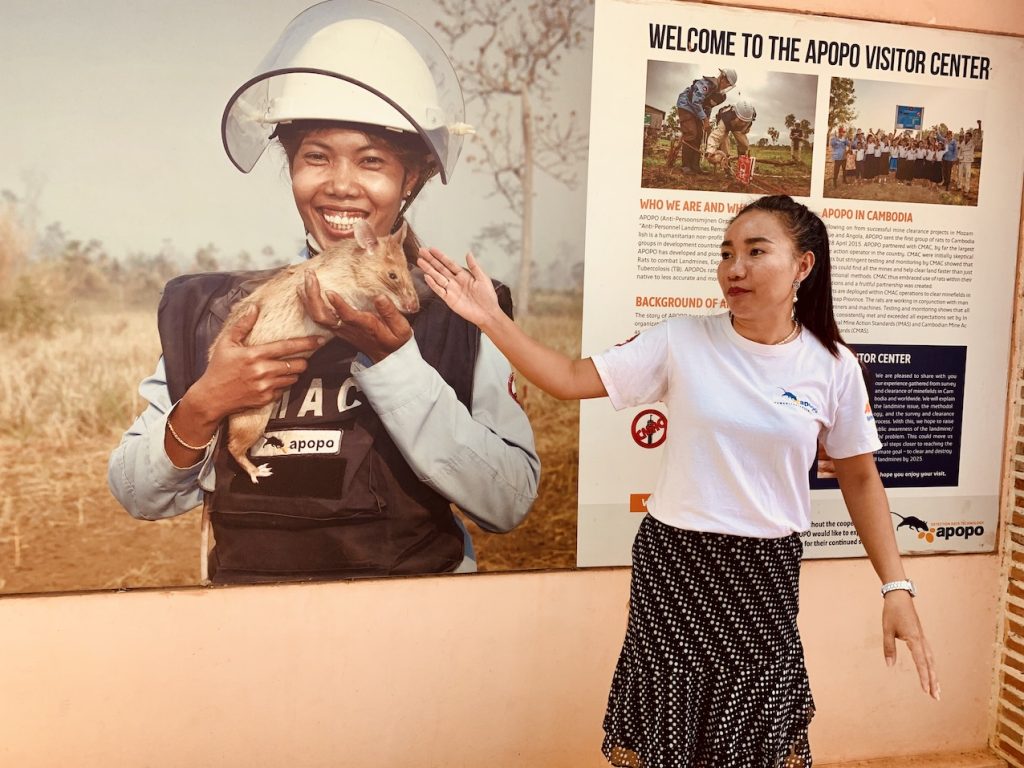 Committed to a mantra of effective landmine and TB detection, APOPO subsequently opened centres in Mozambique, Angola, Thailand, Laos and Vietnam. Of course it was only a matter of time before they got round to Cambodia, one of the worst-hit countries in the world when it comes to landmines. Their facility in Siem Reap became operational in 2014, while the visitor centre followed in 2018. 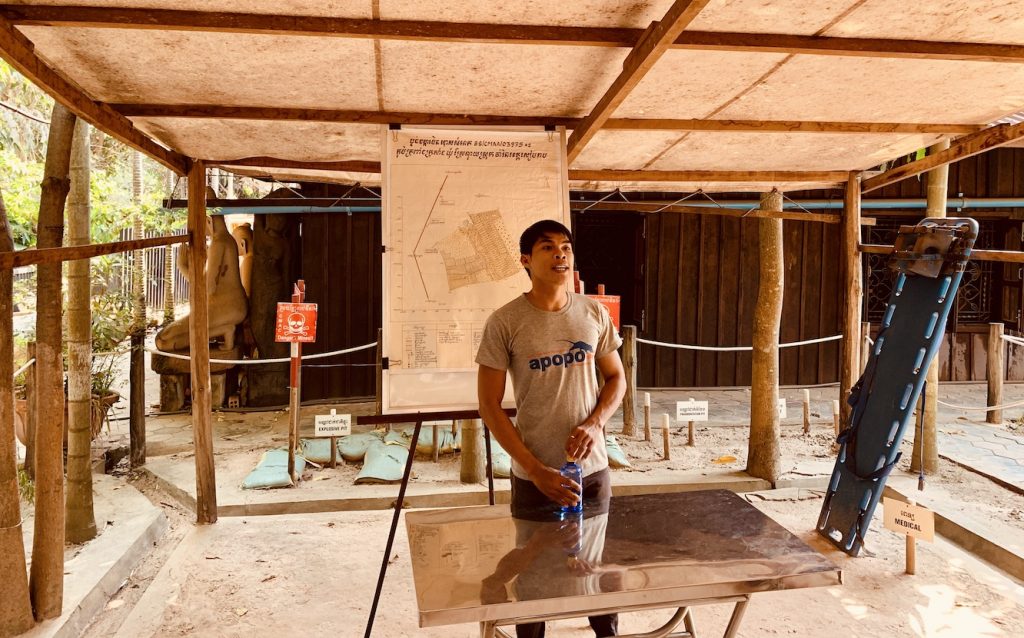 A tour of the Siem Reap complex is a simple and brisk affair that lasts for about an hour. A friendly guide walked us through the basics of the operation before encouraging a Q&A session from his audience. 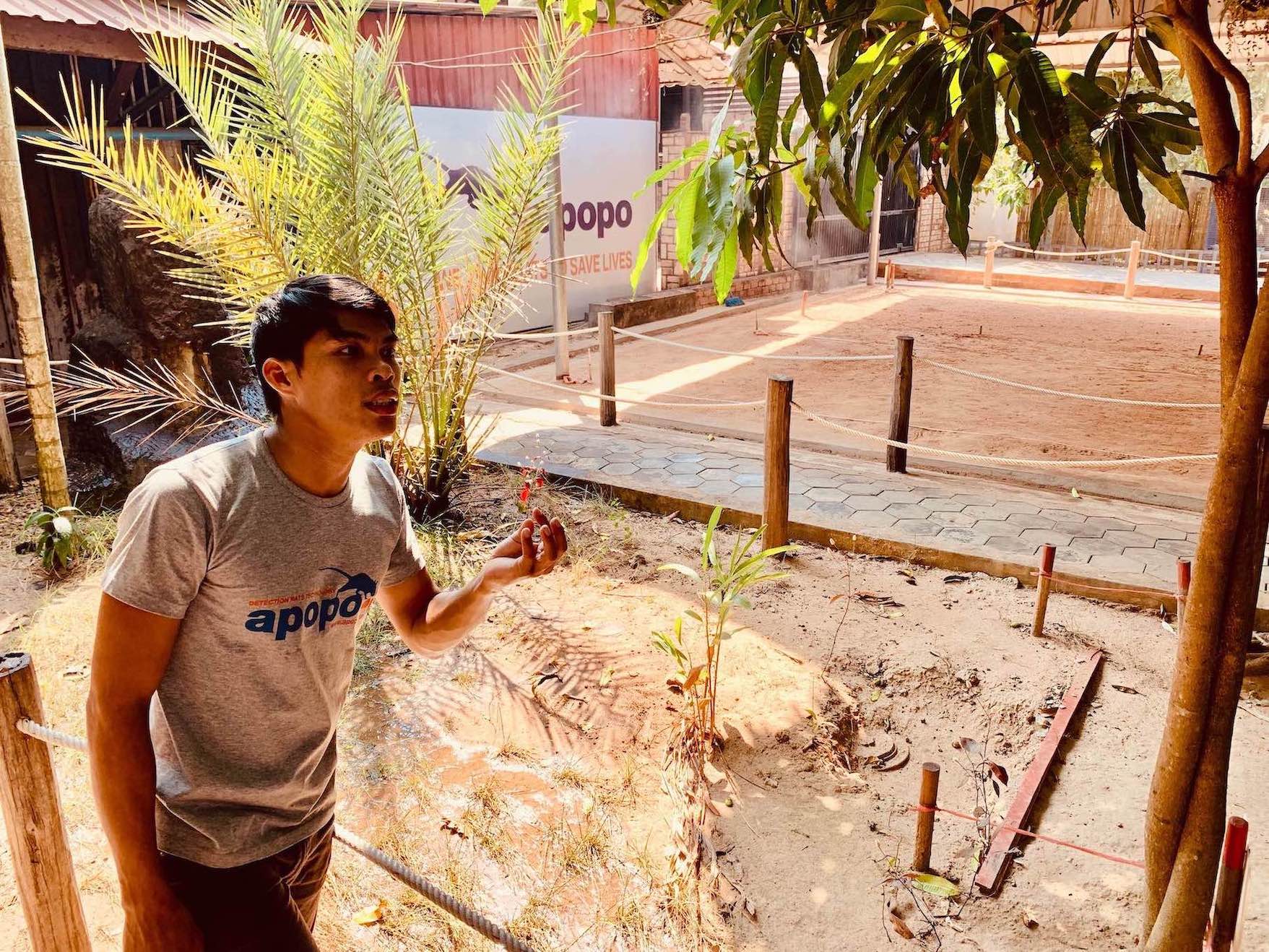 During this, we learned that APOPO works exclusively with the African Giant Pouched Rat. Chiefly because a) they’re really smart and b) they live longer and can give more years of service. A common rat, for example, would typically live for 2-3 years if kept as a pet. In contrast, The Giant African Rat can live more than seven years in captivity.

We also learned that these amazing creatures can sniff out explosives from up to one meter underground. Furthermore, their modest weight and lightness of step ensure they don’t trigger the mines and therefore stay perfectly safe. 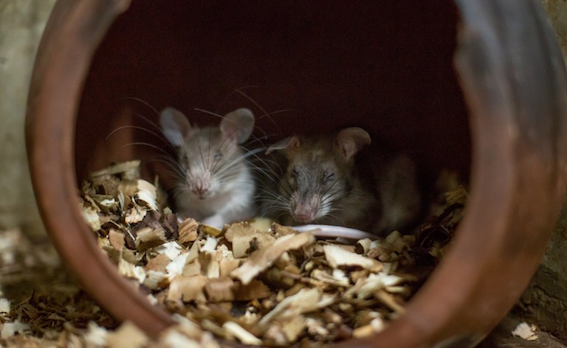 When not sniffing out landmines, the hero rats hang out in interconnected air conditioned cages fitted with running wheels, toys and wooden tripods to satisfy their gnawing instincts. A clay pot with bedding simulates a natural underground nest for sleeping. Their diet meanwhile is a simple concoction of bananas and peanuts. 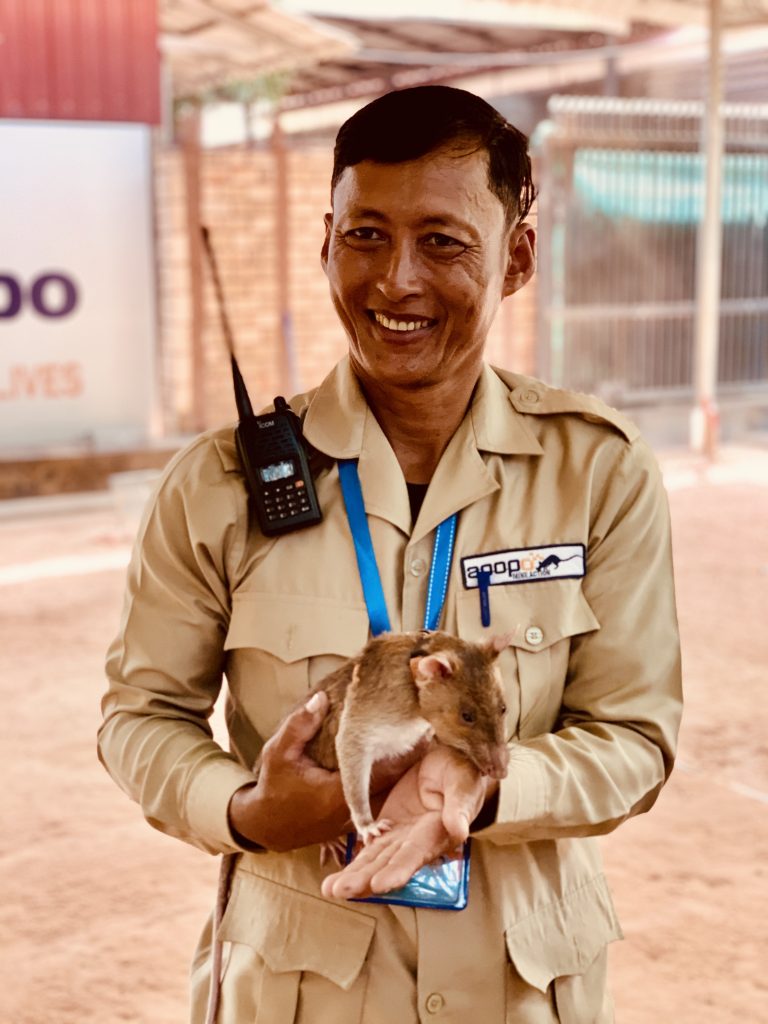 Getting to meet one of the rats in person was of course the highlight of the APOPO experience. One of the most important aspects of the training process is the bond between rat and handler. It’s a system based on total trust from both sides. Happily, I felt a genuine affection between the APOPO handler and his furry friend that day.

Having introduced Mr. Rat, the handler treated us to a fascinating live demonstration of its detecting skills. As you can see in the above video, the rat can comfortably differentiate between everyday smells and the landmine scent, which gives off a TNT odour.

In the early stages of training, handlers expose their rats to a strong target scent. Over time, they gradually lower the strength of the smell and expand the size of the focus area. Eventually, the rat becomes a landmine sniffing specialist! And, of course, the promise of bananas and peanuts provides a strong motivation to get the job done quickly. 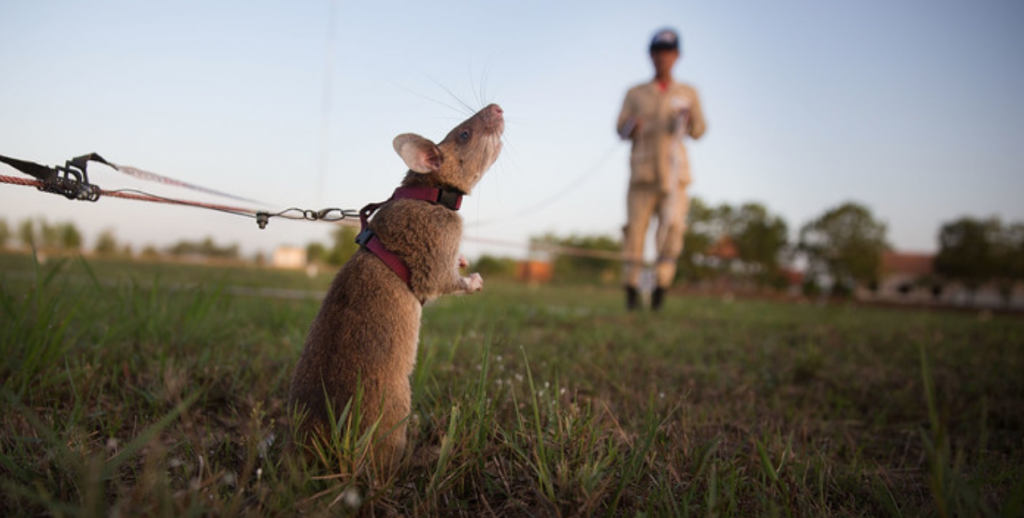 An APOPO rat can search an area the size of a tennis court in just thirty minutes. Compare that to a human with a metal detector who would complete the same task in about four days. No competition. 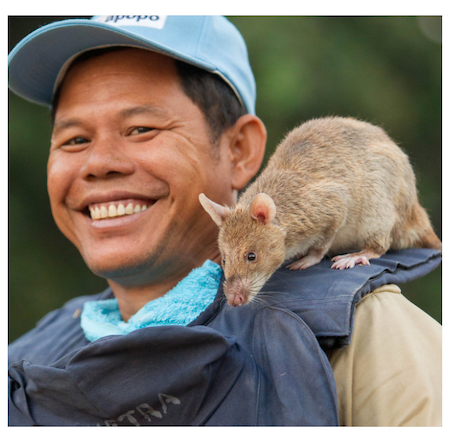 With the sound of applause still rattling around the demonstration grid, we filed into a nearby hut to watch a promotional video. Here, we saw some first hand accounts of the unspeakable misery landmines inflict on their victims. Which of course leaves you in no doubt of the importance of APOPO’s work. 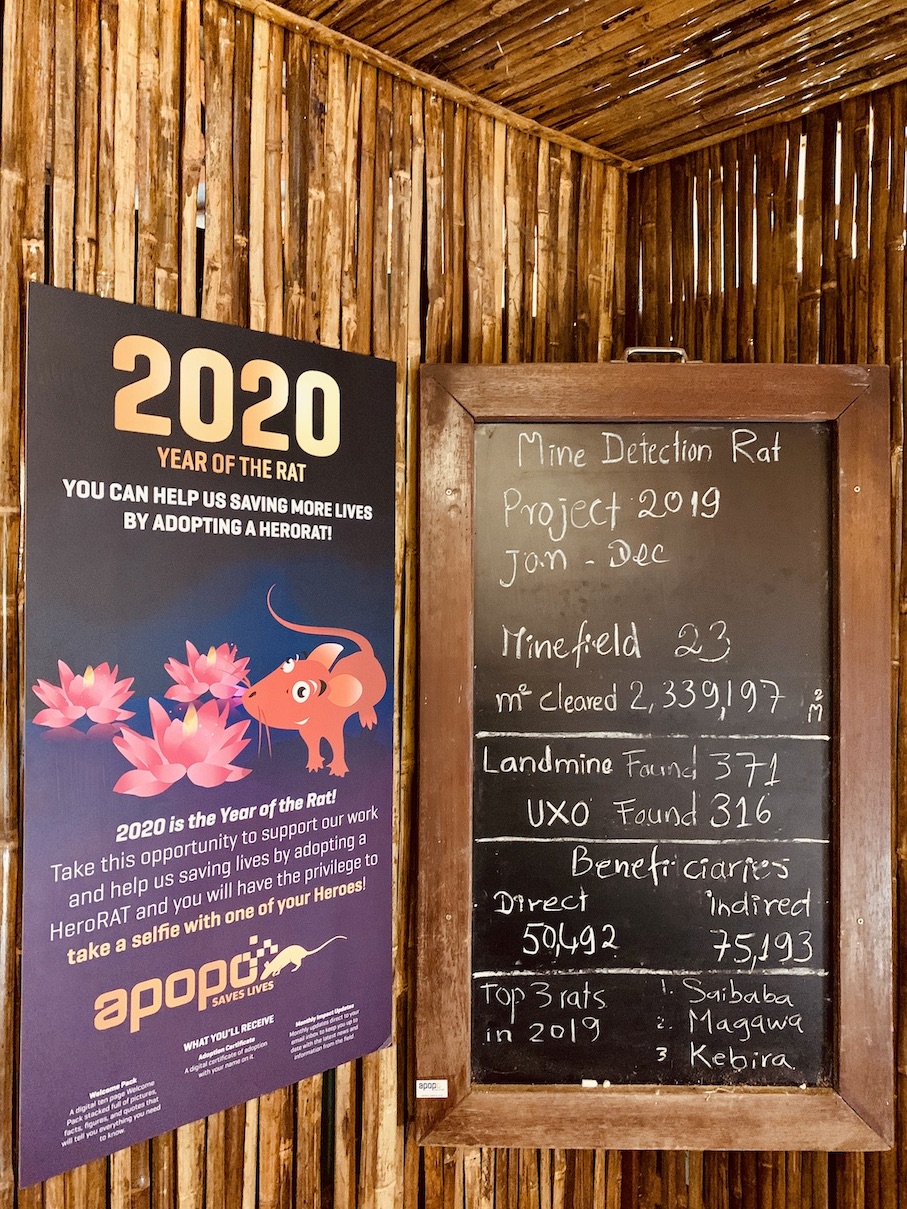 Also in the hut, it was fun to spot this statistics board. In 2019 alone APOPO found and deactivated 371 landmines, along with a further 316 unexploded ordinances. Amusingly, they hold monthly and annual competitions to crown the best performing rats. 2019’s king sniffer was a badass rodent by the name of Saibaba. I’m guessing more peanuts was her grand prize. 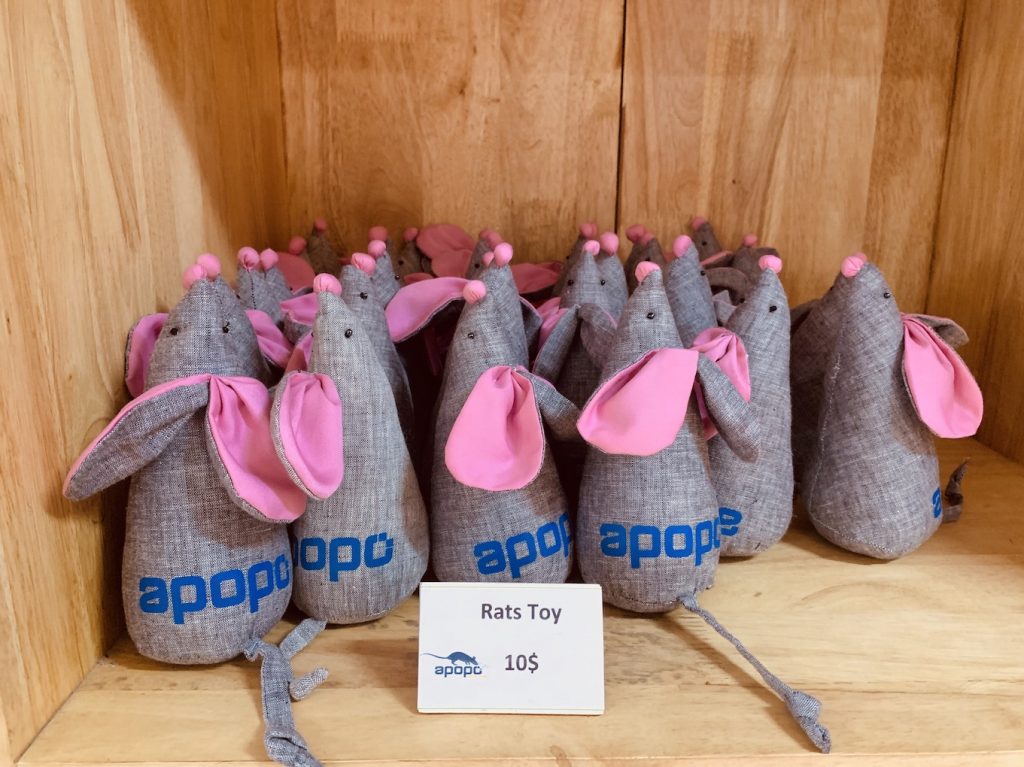 You know you want one.

In the gift shop and lobby there’s a sobering gallery of black and white photographs detailing APOPO’s work over the years. Should it tickle your fancy, they also have t-shirts and rat toys. 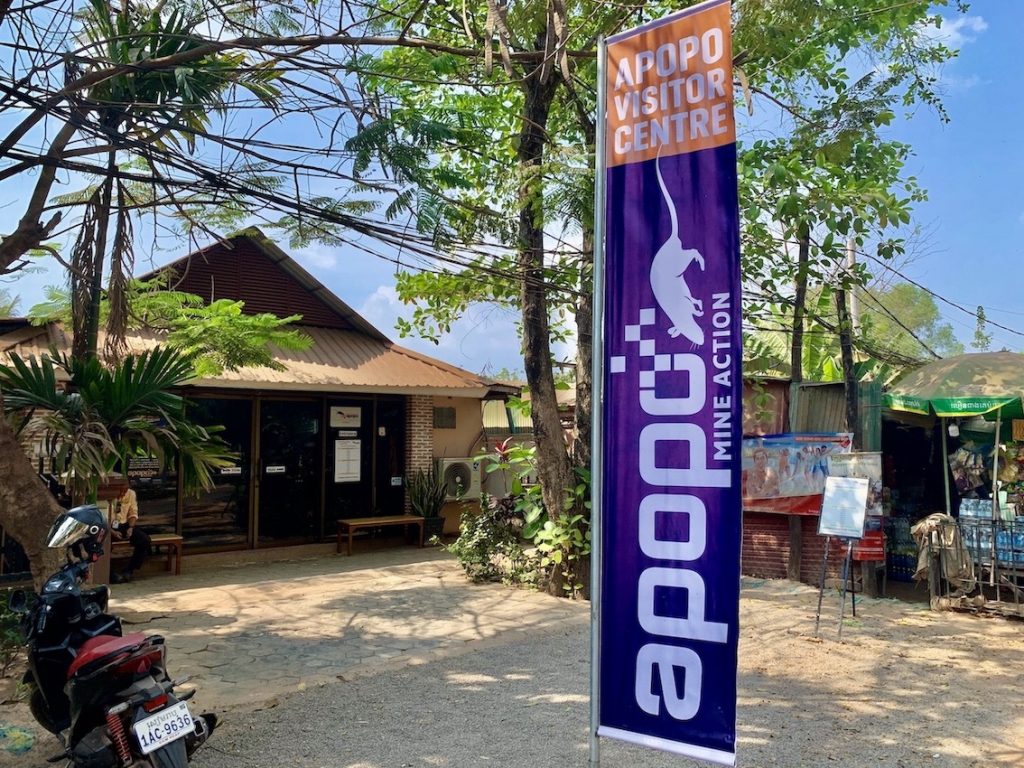 Following a period of closure brought on by COVID-19, APOPO reopened their visitor centre on August the 1st 2020. They are now open seven days a week from 8.30am to 16:30. It’s definitely advisable to contact them ahead of your visit, as tour groups are small and in these uncertain times they may be subject to unexpected closures. For more on APOPO and their work, head to the official website.

To learn more about Cambodia’s landmine problem, take a look at my article on Cambodia Landmine Museum.

Like this? Check out more of my travel reports from around Siem Reap.