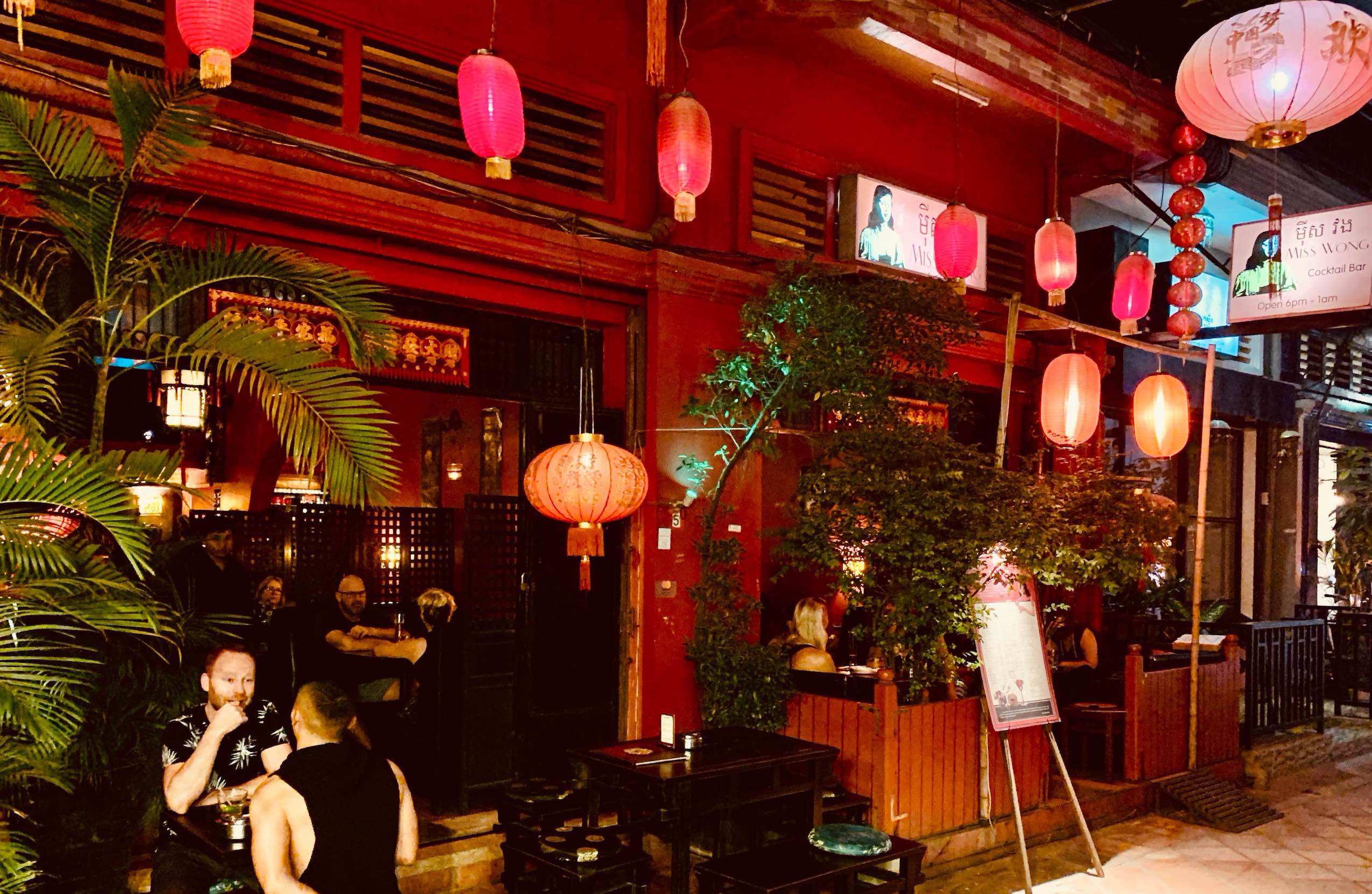 Sladja and I spoke with countless business owners during the making of our Siem Reap cafes and restaurants series. About their backstories and what makes SR such a special place. And, of course, about the many hardships brought on by COVID-19. Time and time again, the folk we chatted with also had something to say on the subject of Siem Reap’s most beloved cocktail bar.

“You guys HAVE to do an article on Miss Wong!”

“I really feel for Dean… hope he can bounce back”. 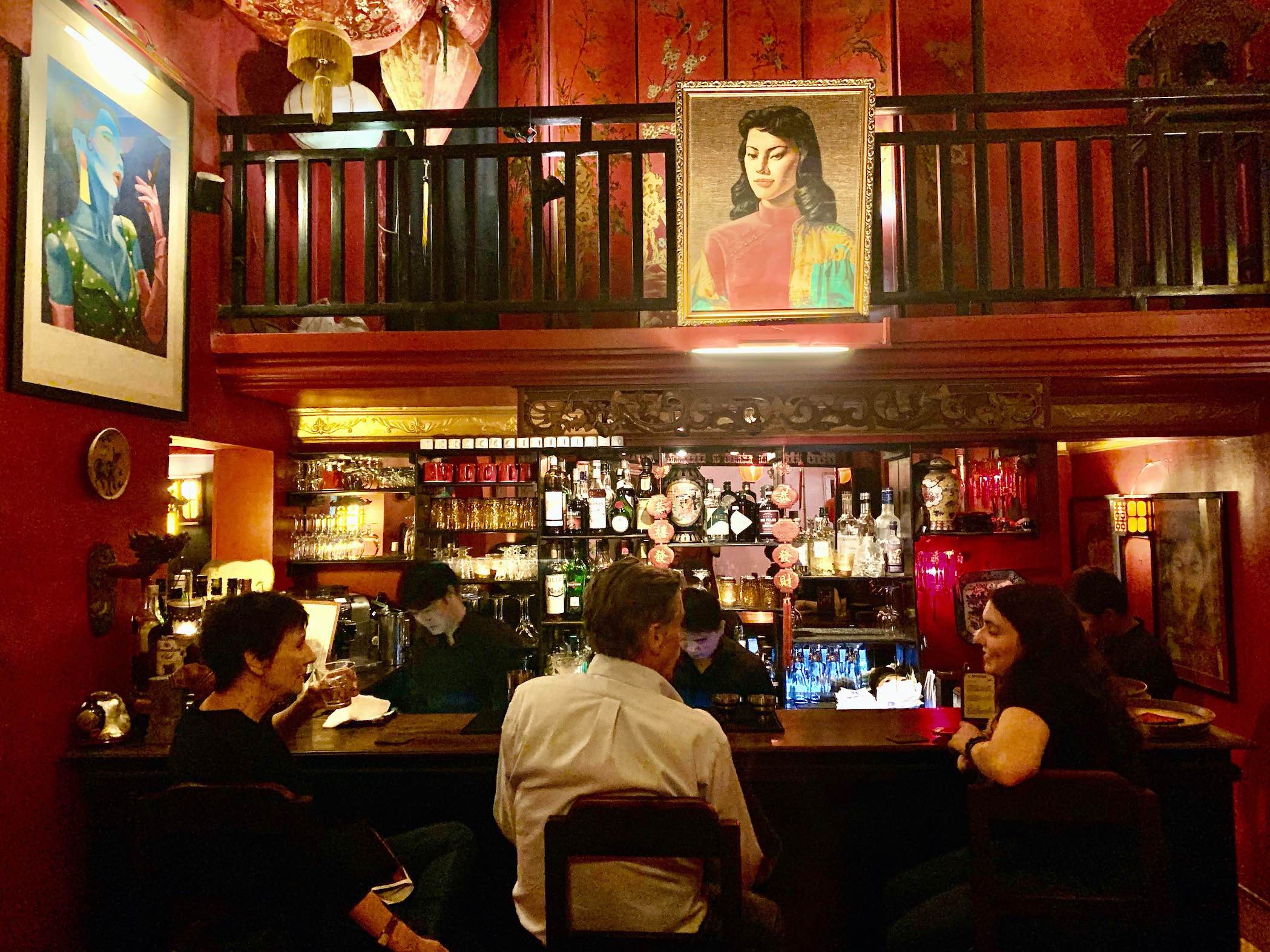 Sladja and I had already had the pleasure of visiting Miss Wong. Back in January 2020, prior to the outbreak of the pandemic, we dropped by for cocktails after dinner at nearby Dakshin’s Indian Restaurant. We loved the place as soon as we laid eyes on it, its ripe-red walls and crimson Chinese lanterns channeling a distinct 1930s Shanghai vibe. In fact, with its sultry lighting, lilting lounge music and dark wood furnishings, I’d say Miss Wong was the dictionary definition of my kinda place. 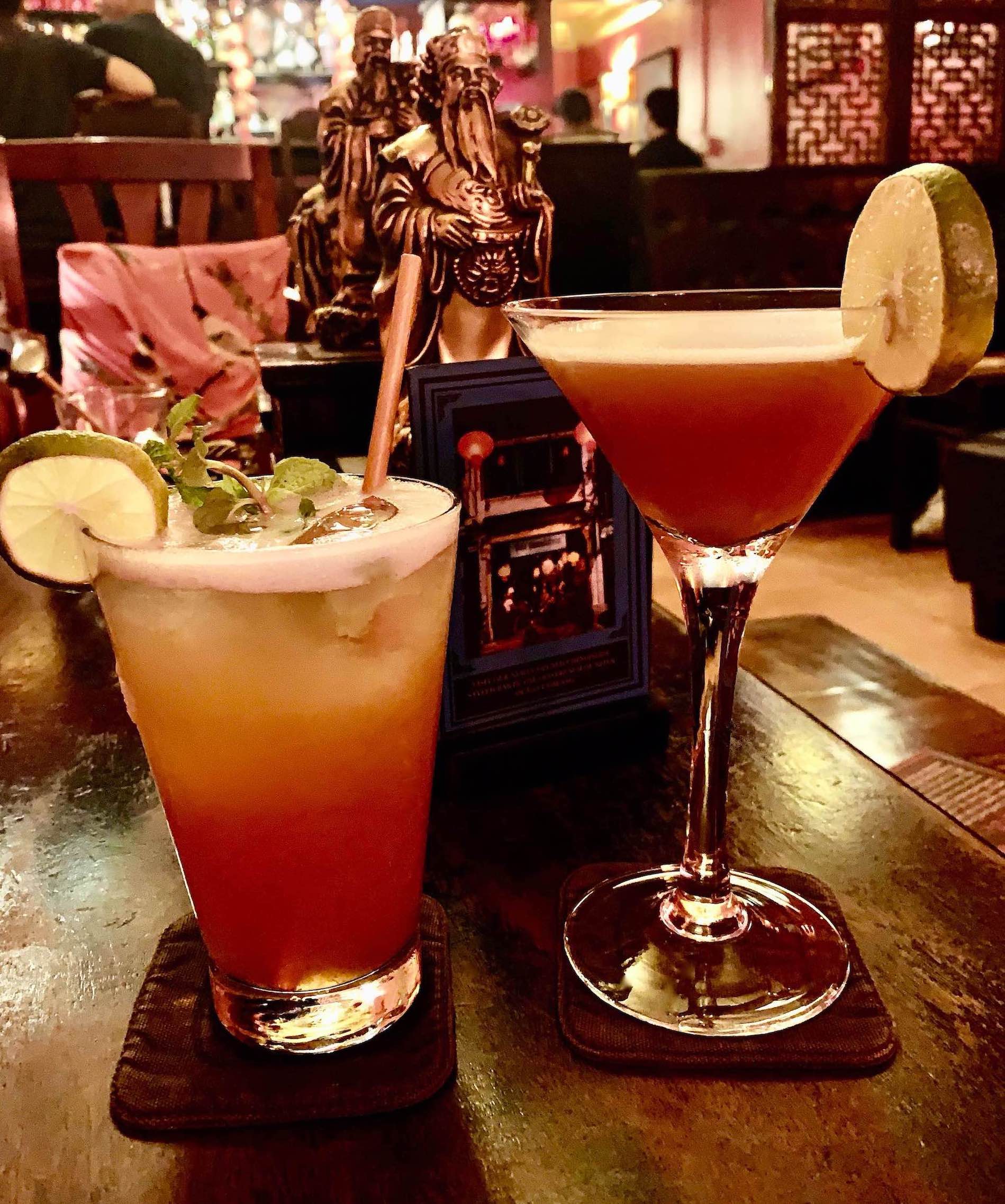 Furthermore, the cocktails were fantastic. That evening, I plumped for the Miss Wong Punch, featuring white rum, St James Amber, cranberry and pineapple with mango and lime juices. Sladja meanwhile went for a zesty Passion Fruit Cosmopolitan. “We’ll definitely be back!” we told ourselves, blissfully unaware that we definitely wouldn’t be back. 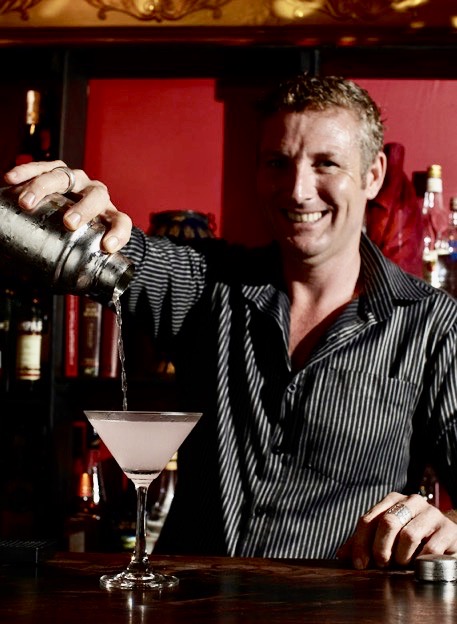 Unfortunately, we didn’t have the pleasure of meeting Dean Williams, Miss Wong’s New Zealand born creator. Moreover, by the time we’d been told about him, Miss Wong had already shut up shop. With no tourists, an expat crowd largely self isolating at home and an exceptionally unreasonable landlord, Dean had been forced to close. 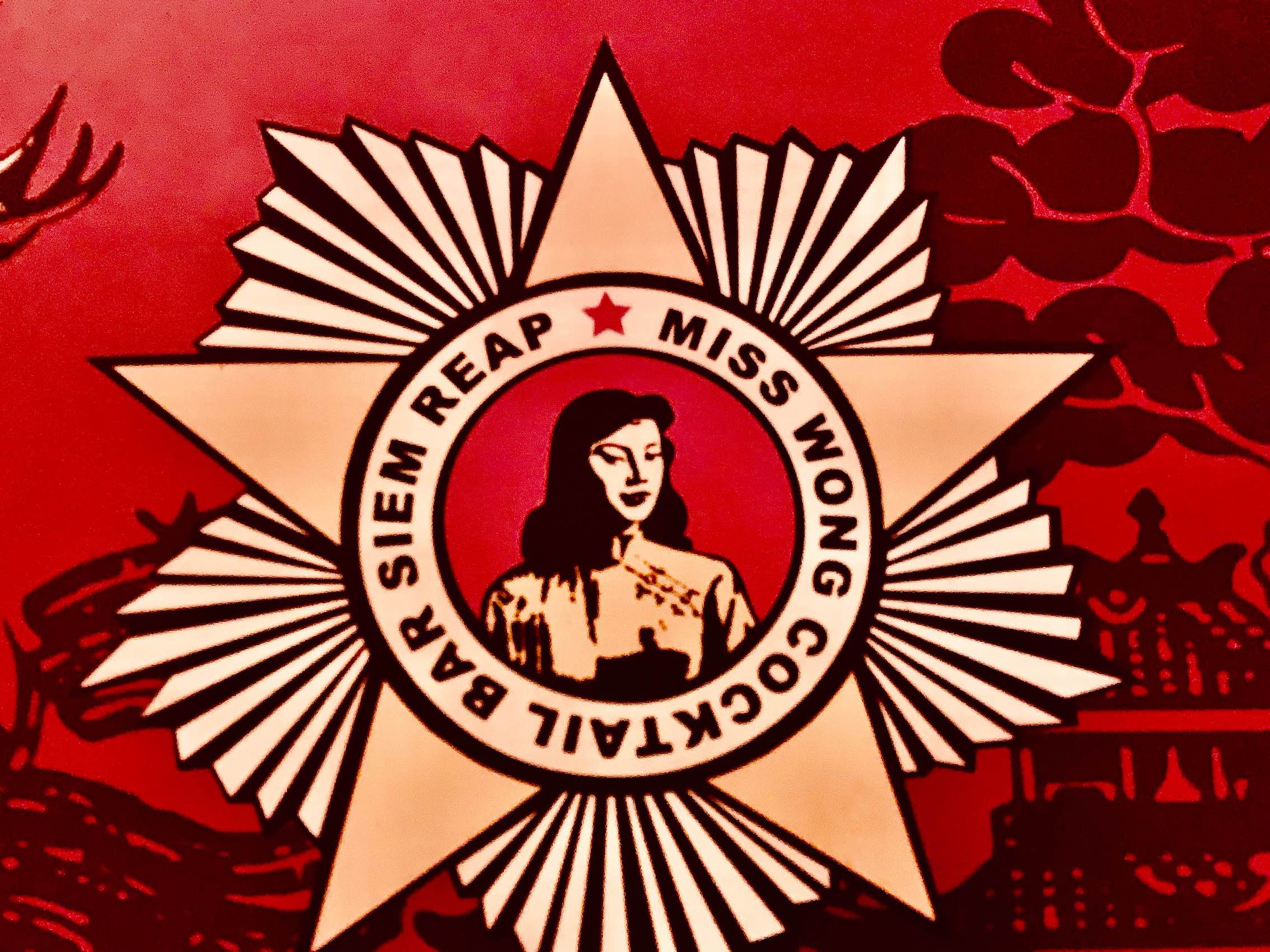 Even pinning him down for a Q&A proved challenging. For a while, he was completely off the radar. Then, we learned, he was all systems go working on reopening Miss Wong in a brand new location. As if he hadn’t enough on his plate, a dose of kidney stones followed. Eventually, and much to our delight, Dean finally got round to answering our questions. 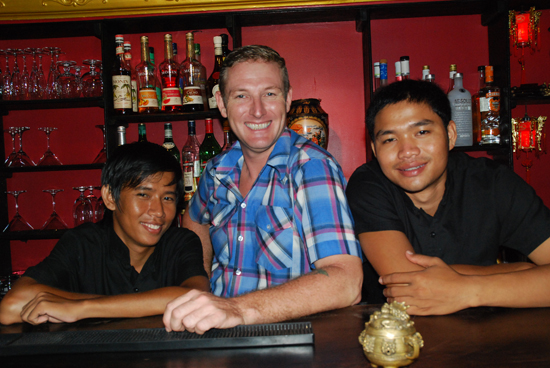 Dean Williams certainly isn’t a man to blow his own trumpet. Take a look online though and you’ll find plenty of people doing that for him. Even before opening one of South East Asia’s most beloved cocktail bars, he was a man of many achievements.

Having grown up on a farm in Aotearoa, New Zealand, Dean admits to taking “the first bus out” as soon as he finished school. Not because he hadn’t had a wonderful childhood, he’s keen to point out, but because of “the pull of Auckland’s bright city lights”.

“I played a merry dance between hospitality, science and media for a very long time”.

New Zealand stories about science, nature and the environment.

While studying for a Bachelor of Science Degree in Biology, Dean got a job at Auckland’s trendy Verona Cafe, where he eventually became the manager. Meanwhile, a volunteer slot on university radio led to a position co-producing and presenting the award-winning show Our Changing World on Radio New Zealand National.

However, in contrast to acclaim and trophies, Dean admits he was also getting into “all sorts of trouble as part of several environmental activism groups”. Somehow, in addition to all this, he also found the time to complete a Postgraduate in Journalism. 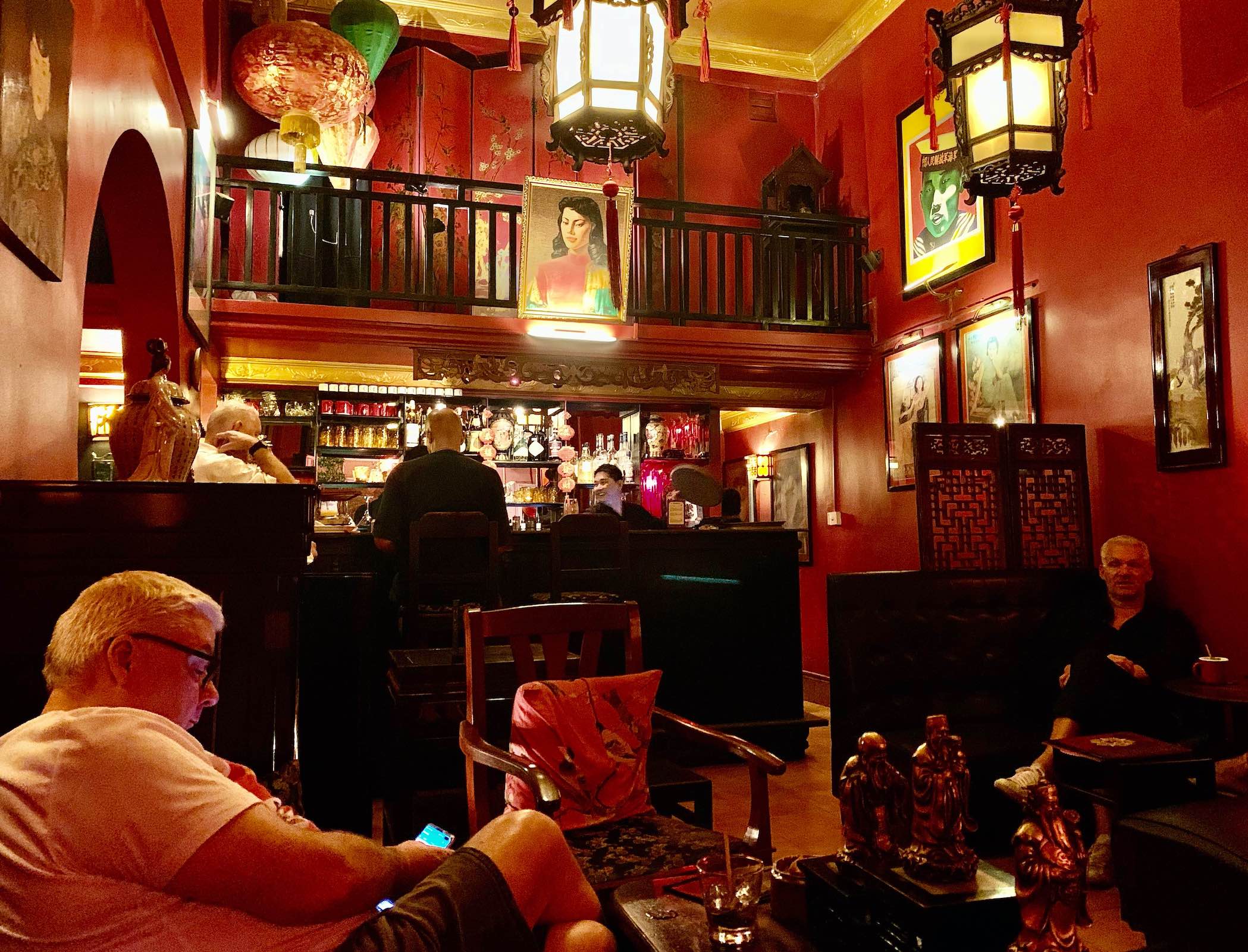 Dean first came to Siem Reap to do some radio features for Our Changing World. His Cambodian adventure left such an impression on him, he decided to take a sabbatical so that he could come back and spend a year “maybe doing some environmental NGO work”. 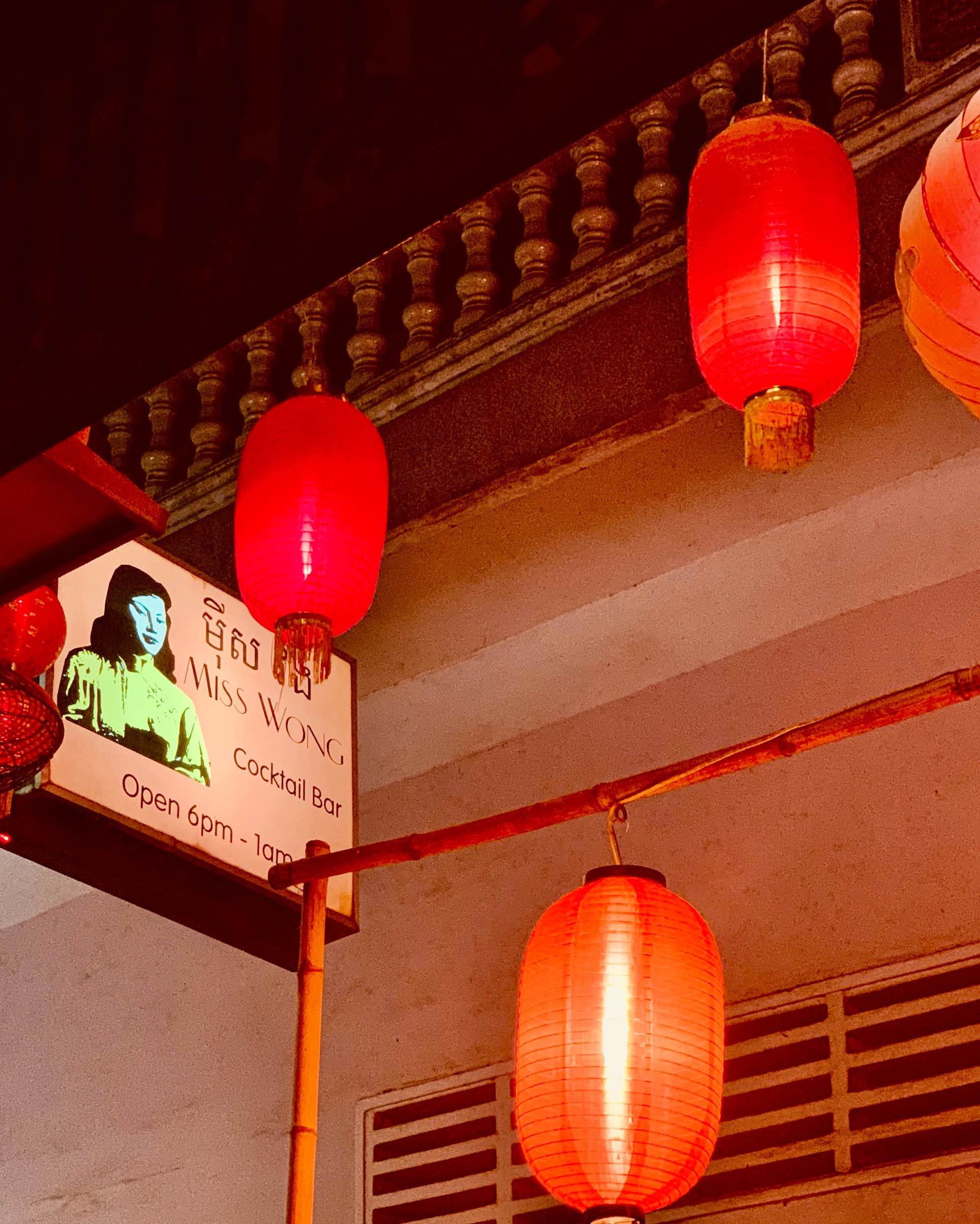 What transpired however was an extended period adjusting to expat life. He learned how to ride a moto, had a brief spell writing for The Phnom Penh Post and got a part time job at Abacus Restaurant. At some point, then-owner Renaud Fichet had to return to France for emergency medical treatment. Thus it was Dean, who spoke not a word of French, whom Renaud left in charge of Siem Reap’s most popular Franco-expat hangout! 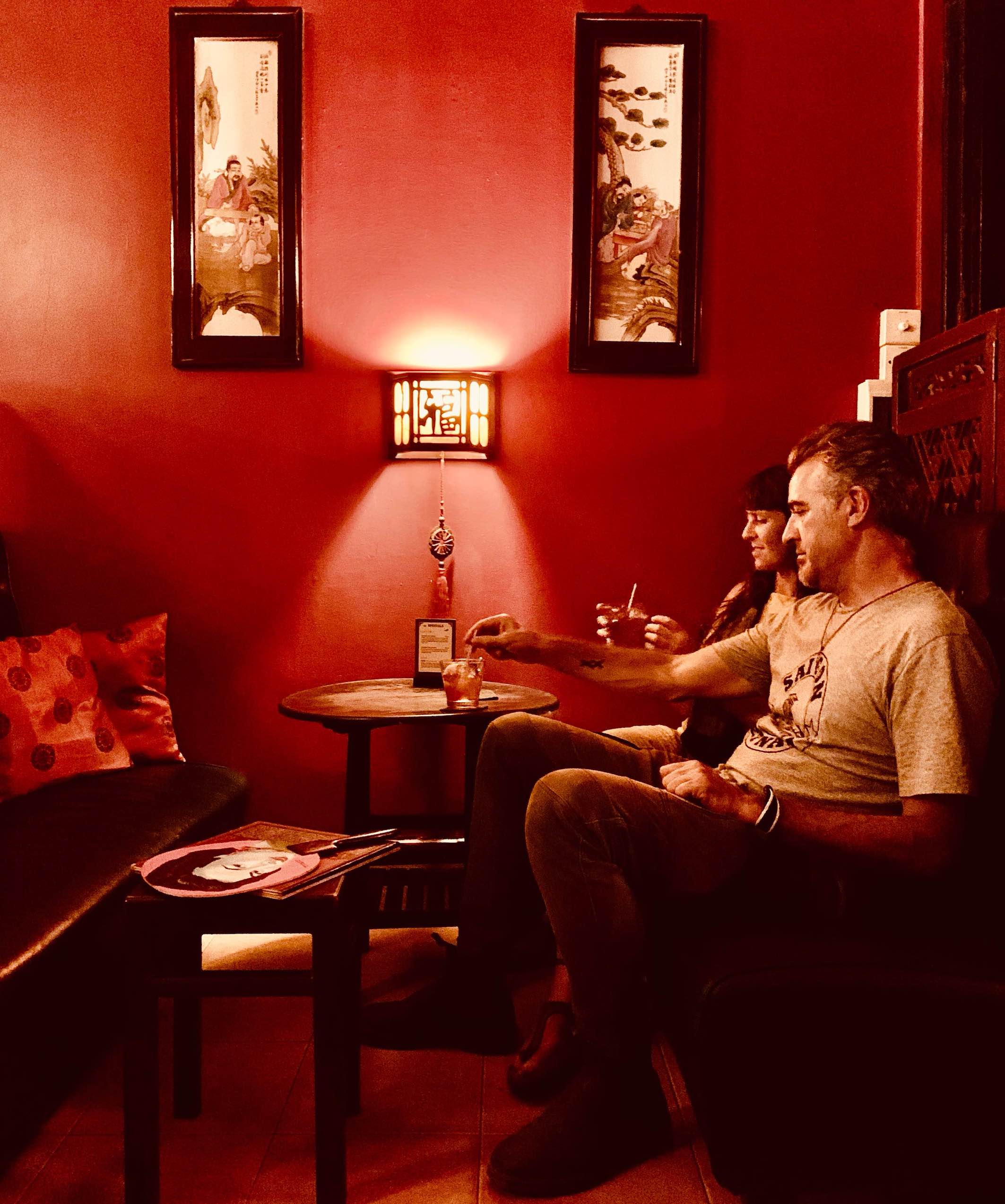 A cosy evening in Siem Reap.

According to Dean, his decision to strike out alone and open Miss Wong came “on some insane whim”. The bar’s design was inspired by his love for Shanghai film noir. Movies where the protagonists hang out in speakeasy jazz clubs with dark, smoky interiors. He cites the acclaimed romantic drama In The Mood for Love as a particular favourite. 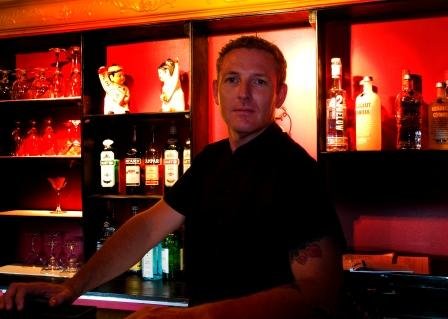 As luck would have it, Dean found the perfect building, located in a dark alley near Pub Street. The kind of alley, one reviewer wrote, where you might “find a basement store with a Mogwai for sale”. With a budget of just $8000, Dean secured the place, painted the interior red and raided the stores of Phnom Penh for choice Chinese and Khmer antiques.

“My business plan was based on buying a second-hand car with no insurance. If it broke down and didn’t work, I would leave it on the side of the road and head home”. 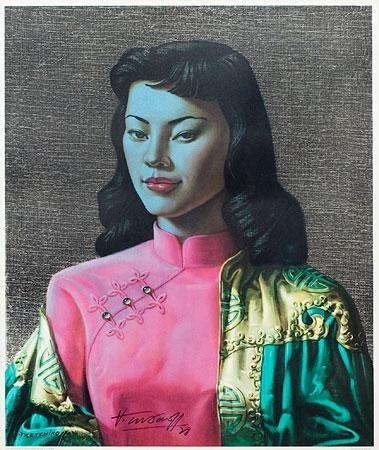 When it came to naming his new bar, Dean turned to the famous painting Miss Wong by the Russian artist Vladimir Tretchikoff. He remembers it hanging in his grandmother’s house as a child. Later, in the 1990s, he began collecting Miss Wong prints from various thrift shops. 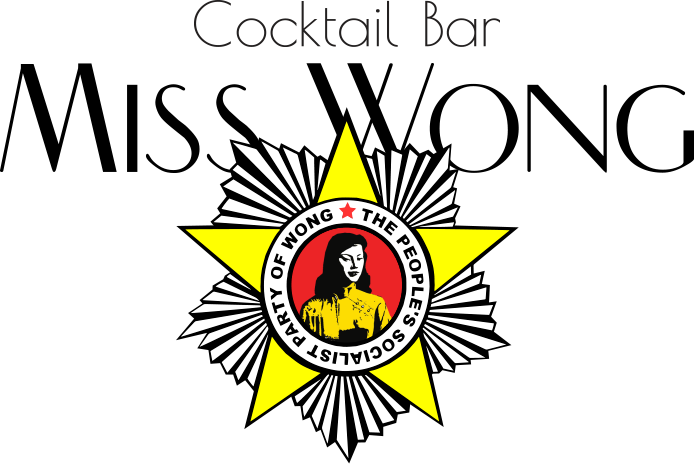 Dean says one of the reasons he loves the painting is that it “walks the fine line of kitsch”. As with much of Tretchikoff’s work, he also likes the fact that prints were mass produced at affordable prices and therefore accessible to working class people in The UK and The Commonwealth.

“I think his work also reminds me that to be unassuming and unpretentious is a good value”. 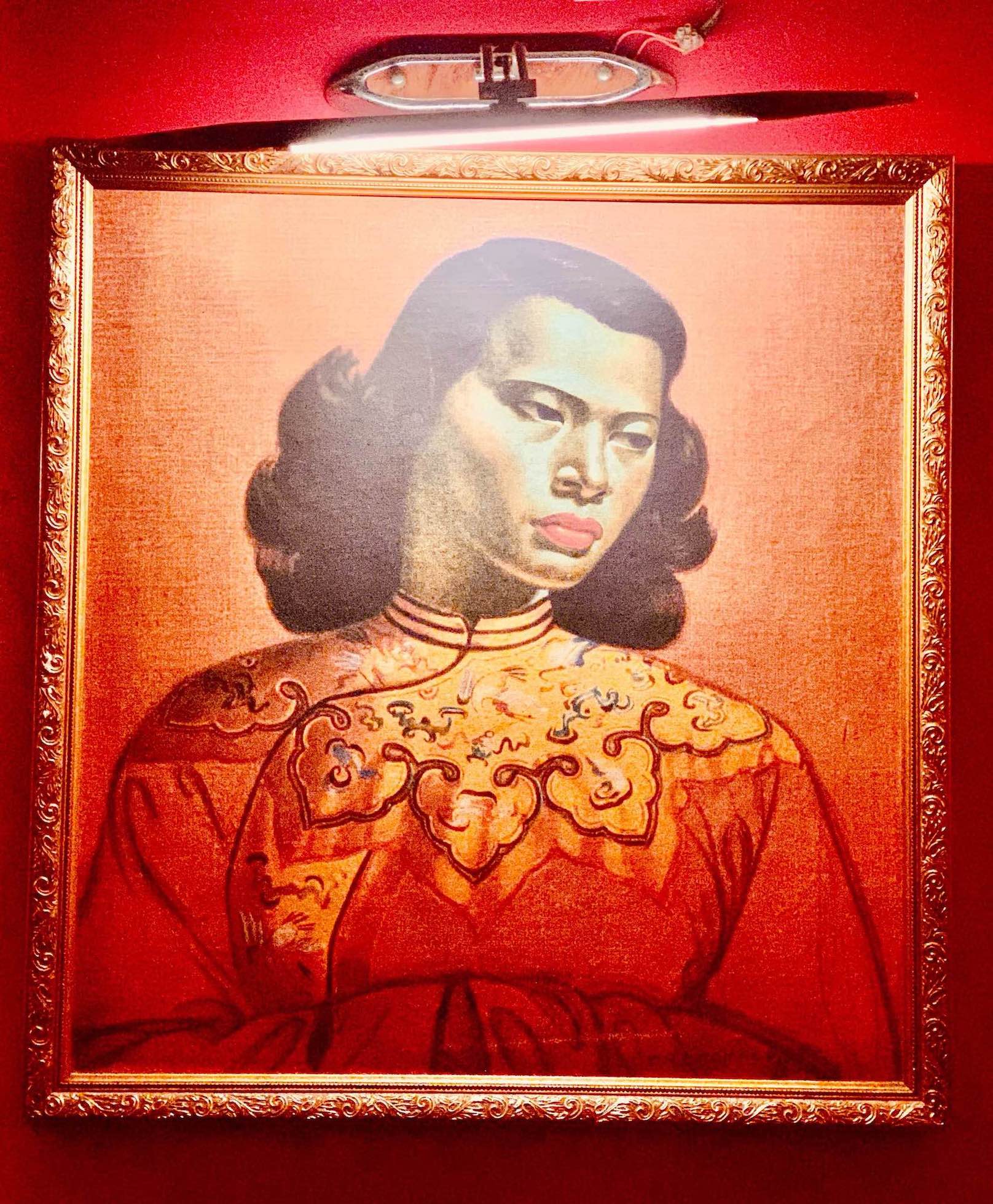 There are plenty of other paintings and art pieces scattered around Miss Wong. I recall mooching around back in January, cocktail in hand, seeing what I could find. Among the many delights, I came across another Tretchikoff print, Chinese Girl. It’s also known as The Green Lady, a reference to the subject’s unusual blue-green skin tone. 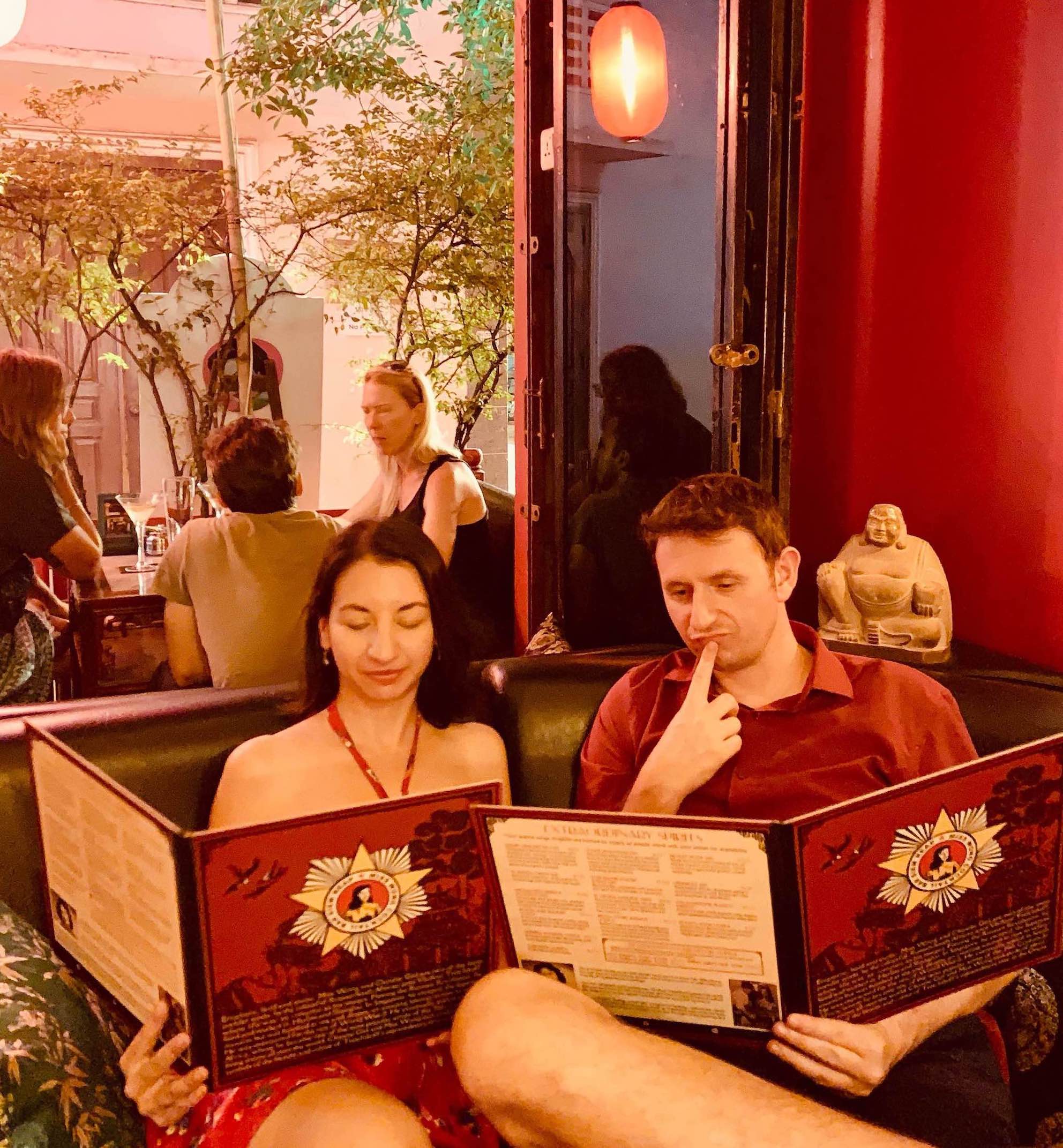 Mulling over the cocktail options.

It had been an eventful, challenging and ultimately rewarding twelve years for Dean, since Miss Wong opened its doors in 2008. In that time, he and his business experienced the global economic crisis, the red and yellow shirt protests, the Preah Vhear Temple escalation and extreme flooding. Now, it was COVID-19.

Thankfully, every step of the way, Siem Reap’s tight-knit community has been on hand to help him through. From close friends and fellow expat business owners to his loyal team of Khmer staff, some of whom have been with him since day one. 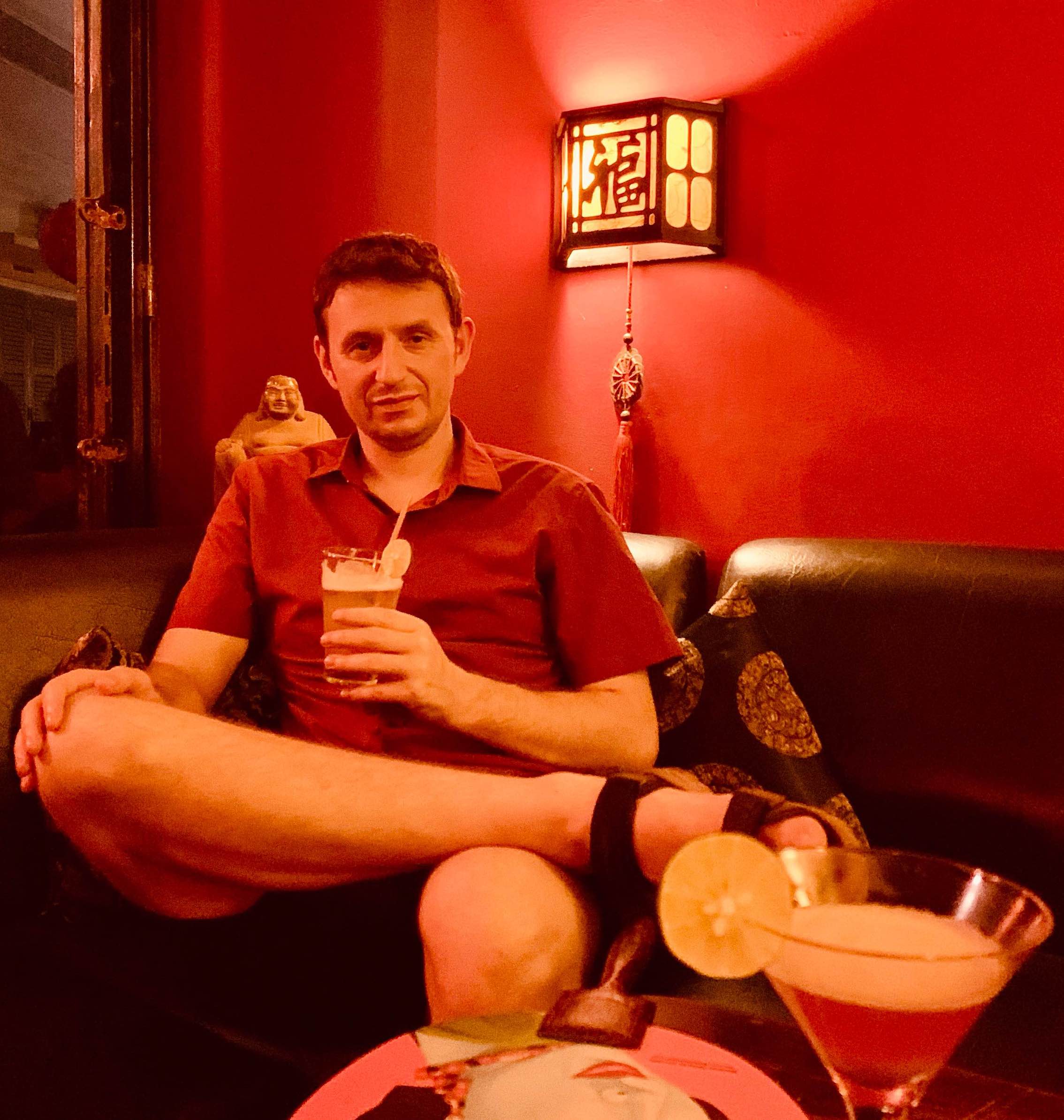 In July 2020, just days before Sladja and I left Siem Reap for the city of Kampot, we managed to briefly poke our heads into the new Miss Wong on Street 26. It stands between Wat Bo and the river, in a building formerly home to Flow Restaurant. At long last we got exchange a few words from Dean, who was clearly a bit frazzled with the many challenges of relaunching his business.

Update November 2022: Nearly two and a half years later, it’s fantastic to read that Miss Wong remains part of the Siem Reap food and drink scene. If one is in town, please do drop by and say hi to Dean and his team. Grab a cocktail and maybe order some of their famous Dim Sum. Alternatively, there’s hotpot and barbecue duck pancakes, among other delights. 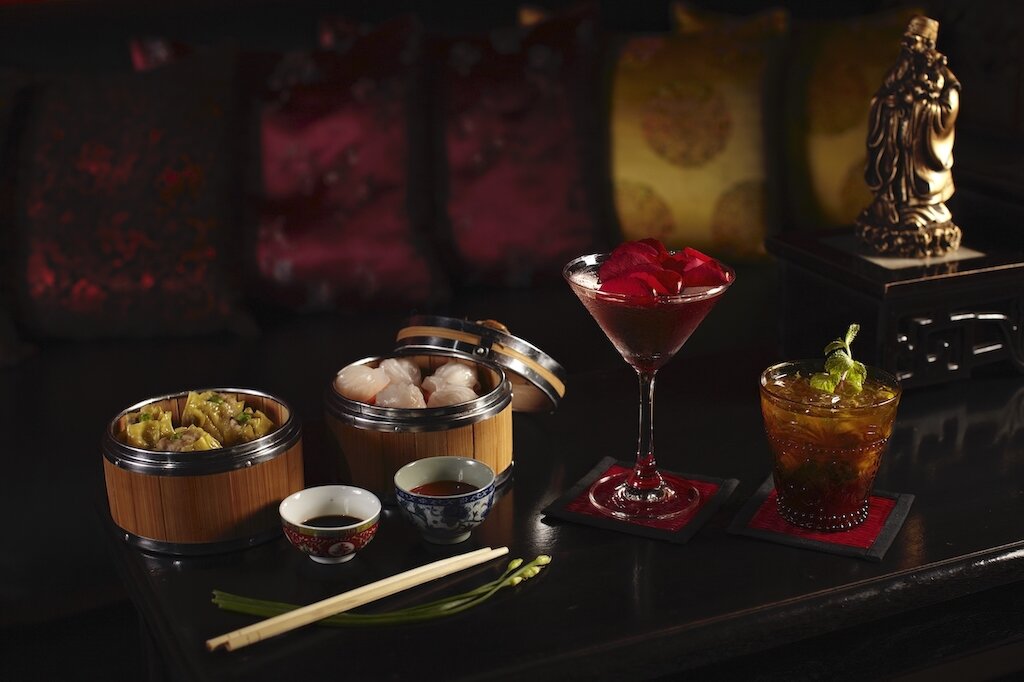 Dean isn’t shy in admitting that he lifted some of his recipes straight from the books of BBC chef Ken Hom. Amazingly, Hom even ended up visiting Miss Wong, a real coup for Dean. During his visit, he graciously signed a few cookbooks before tweaking a dish or two. Pretty cool. To get in touch with this legendary Siem Reap institution, head for misswong.net and their Facebook page.