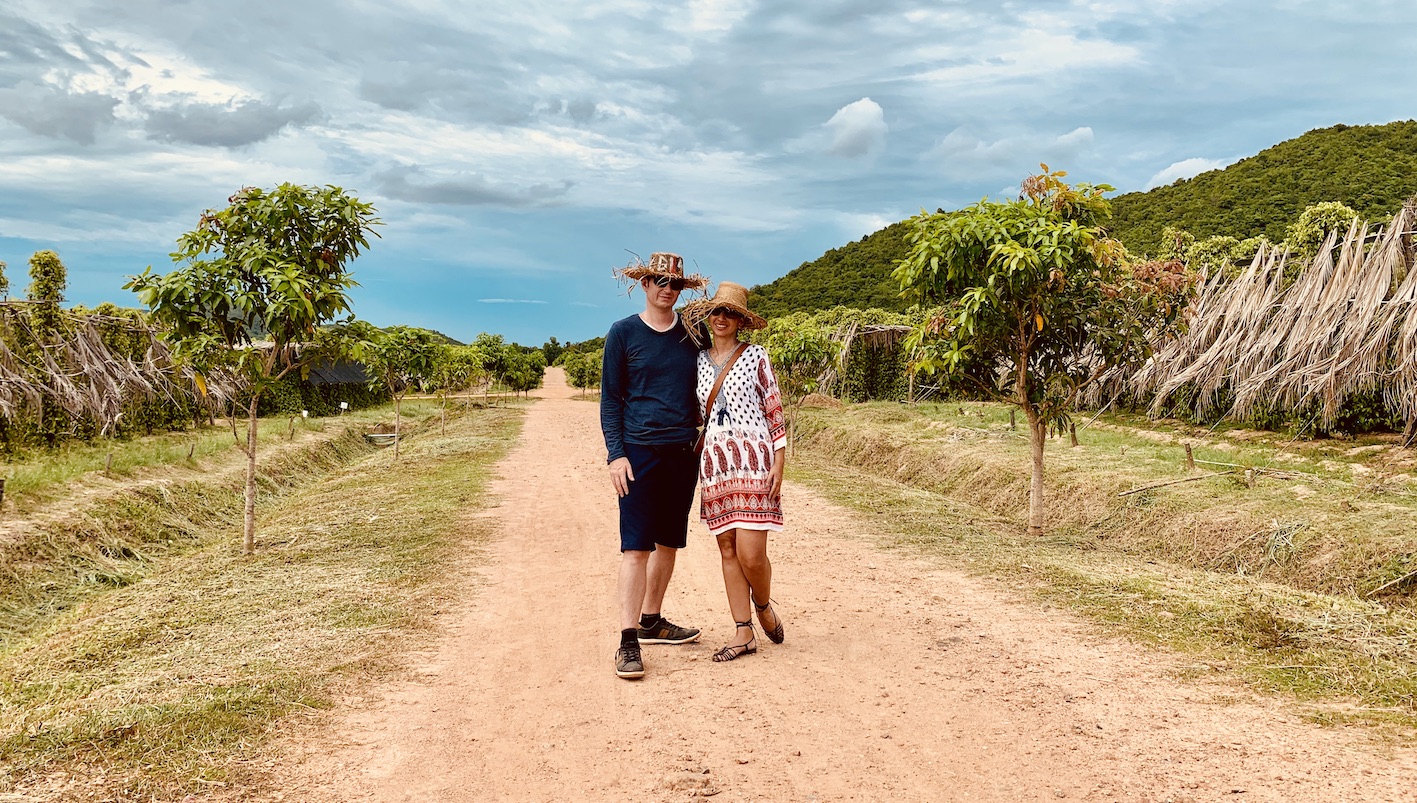 September 2020. Who would have thought that the less-trodden province of Kampot in Cambodia is home to some of the world’s best pepper farms? It’s something to do with the mineral rich soil and the intensity of the rainy season, among other factors. Venture out of Kampot’s sleepy city centre into the even more languid countryside and you’ll find hundreds of pepper farms scattered around. 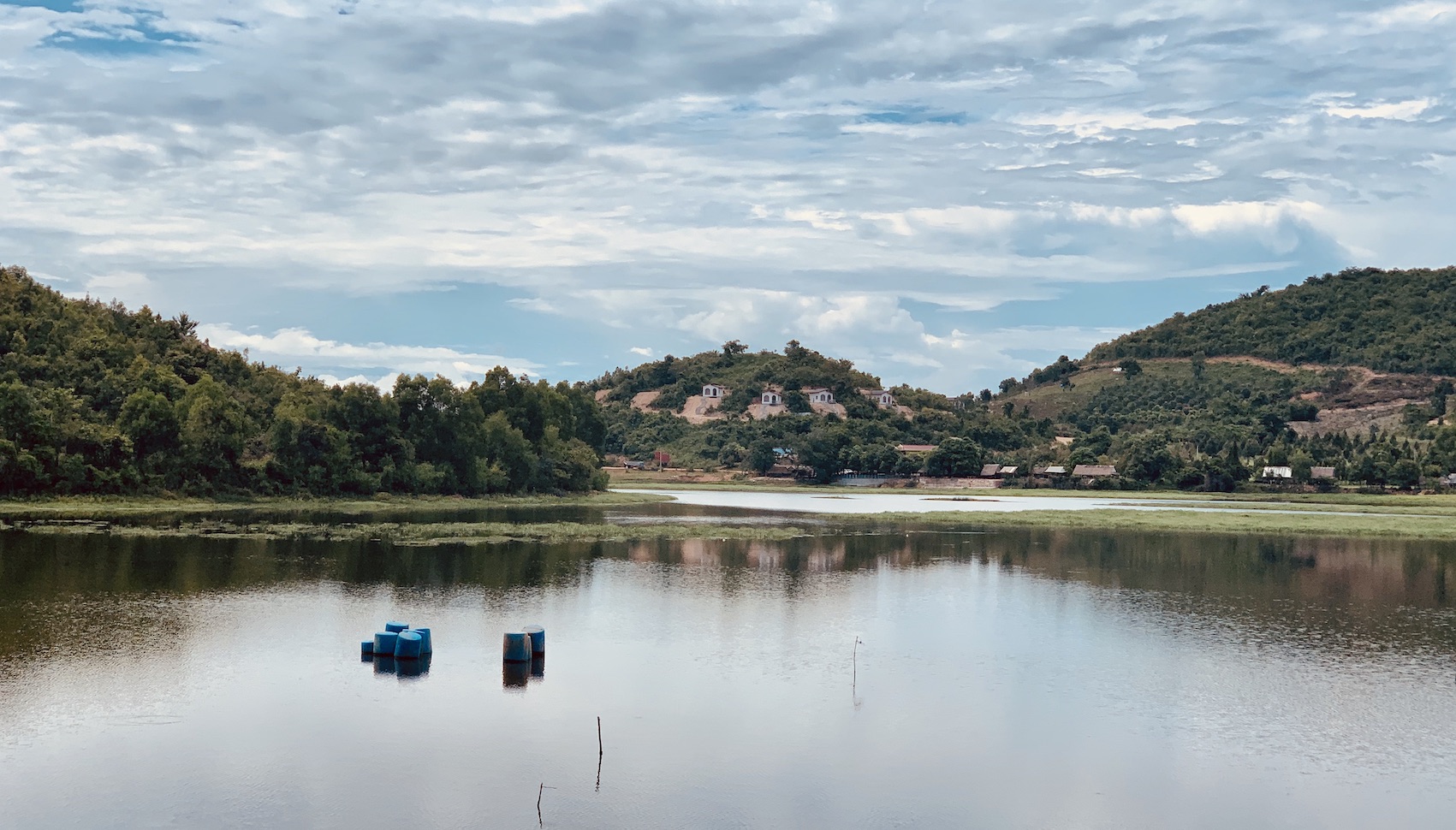 Kampot’s biggest pepper player is La Plantation, a French-Belgian owned farm and social project located deep in the middle of nowhere, about an hour outside the city.

It’s a journey Sladja and I are unlikely to ever forget. Crunching through the potholes of various dusty village lanes in our tuk tuk, we eventually arrived at this amazing Secret Lake. So pretty we had to pause our journey to drink in the views. 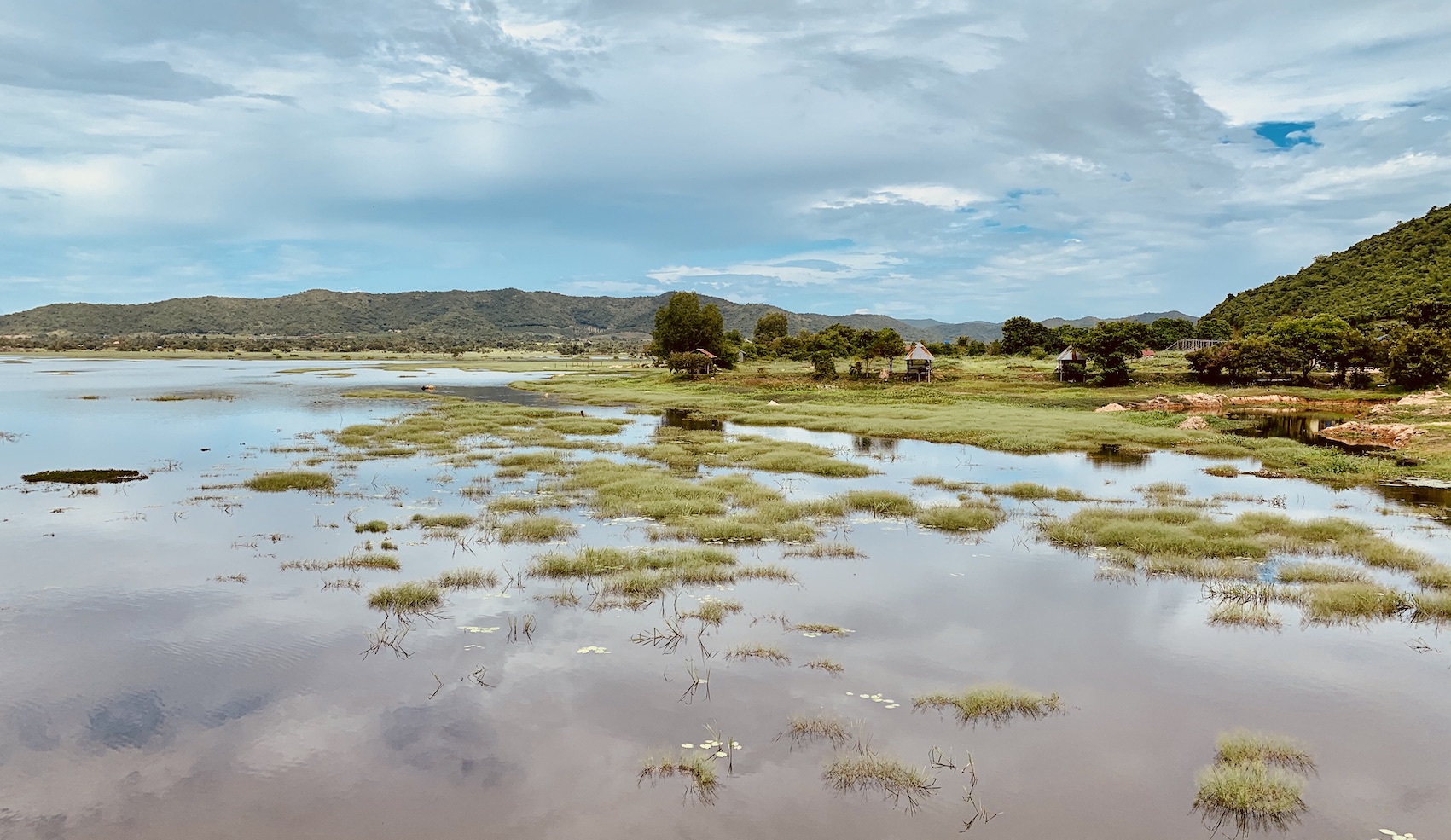 A beautiful but tragic spot.

Sadly, we later discovered The Khmer Rouge used slaves to build the lake in the mid 1970s. Those that died during its construction were buried under the lake, taking their secrets with them. 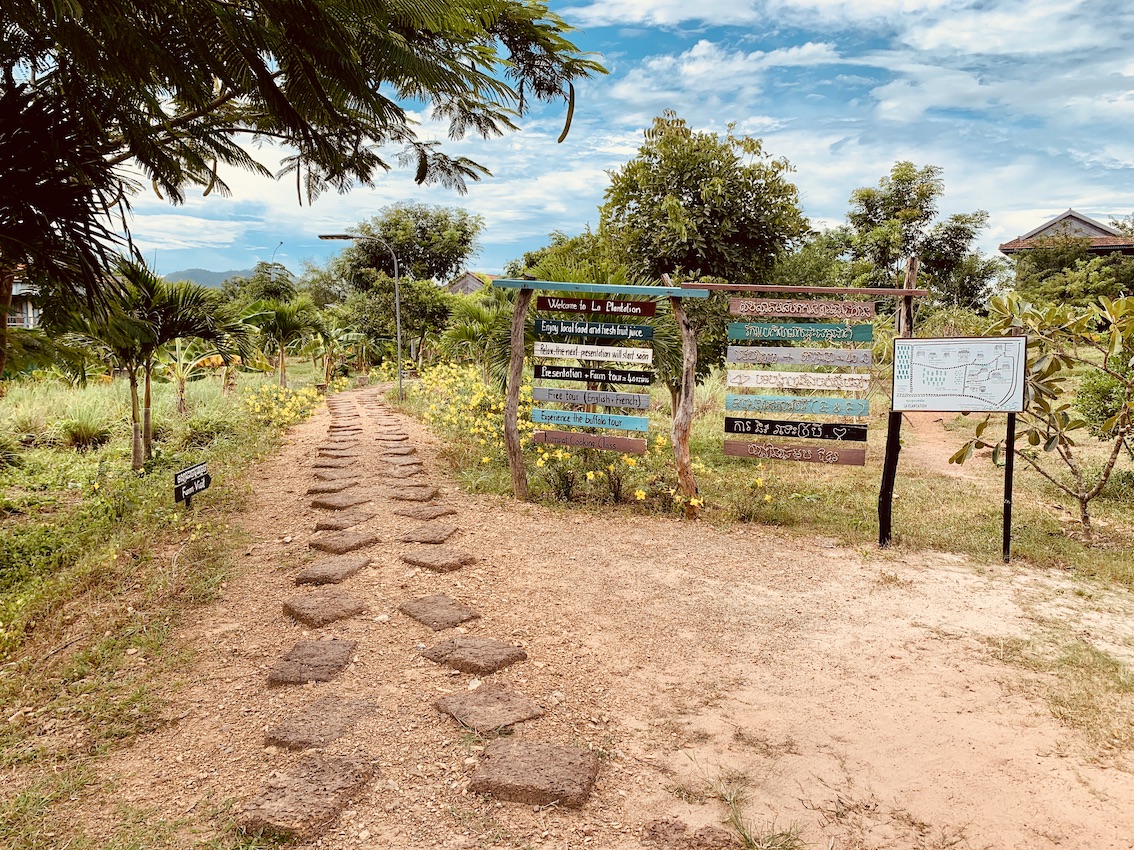 Our visit to La Plantation was highly speculative. Due to COVID, we weren’t even sure if they’d be open. But right enough, as we pulled up outside the entrance, someone came scurrying out with a bottle of hand sanitiser and a temperature gun. #thenewnormal 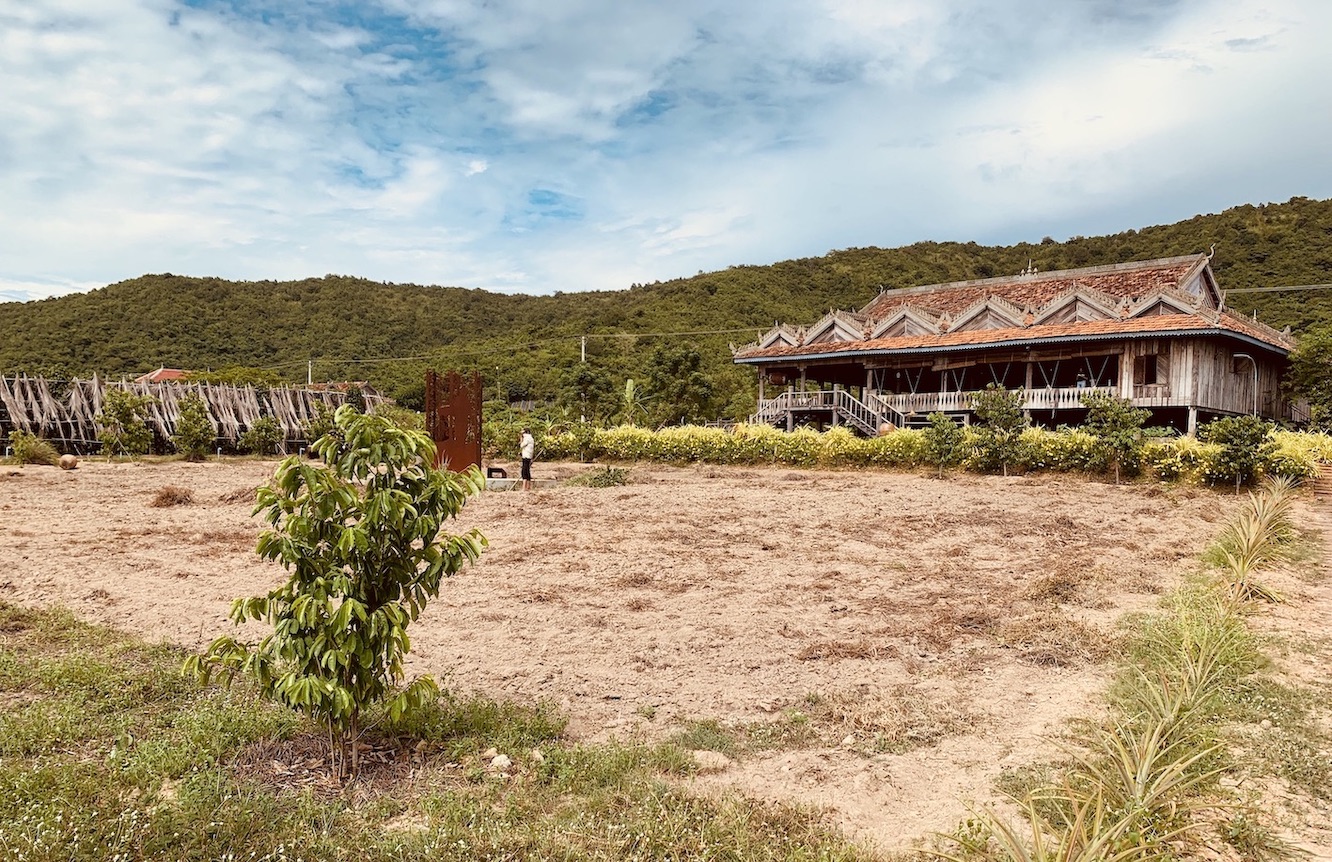 Having been deemed healthy, we followed the signs by the main path towards the Welcome Hall. This is the farm’s greeting point, education centre, restaurant, product store and pepper tasting corner. 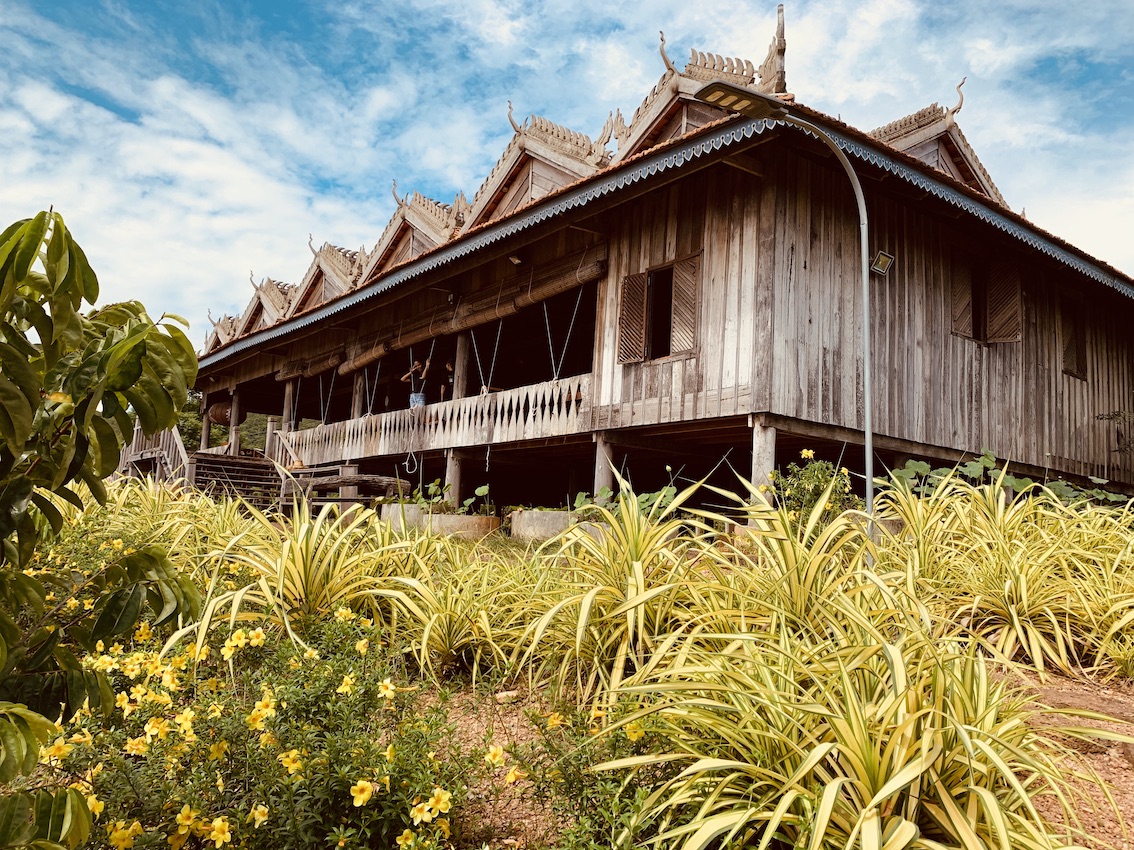 The magnificent traditional wooden Khmer structure is over a hundred years old. Moreover, like several others across the farm, it’s been beautifully restored to its original glory after the owners found it derelict. “Welcome to La Plantation!” called a Khmer girl from the first floor as we approached the entrance steps. 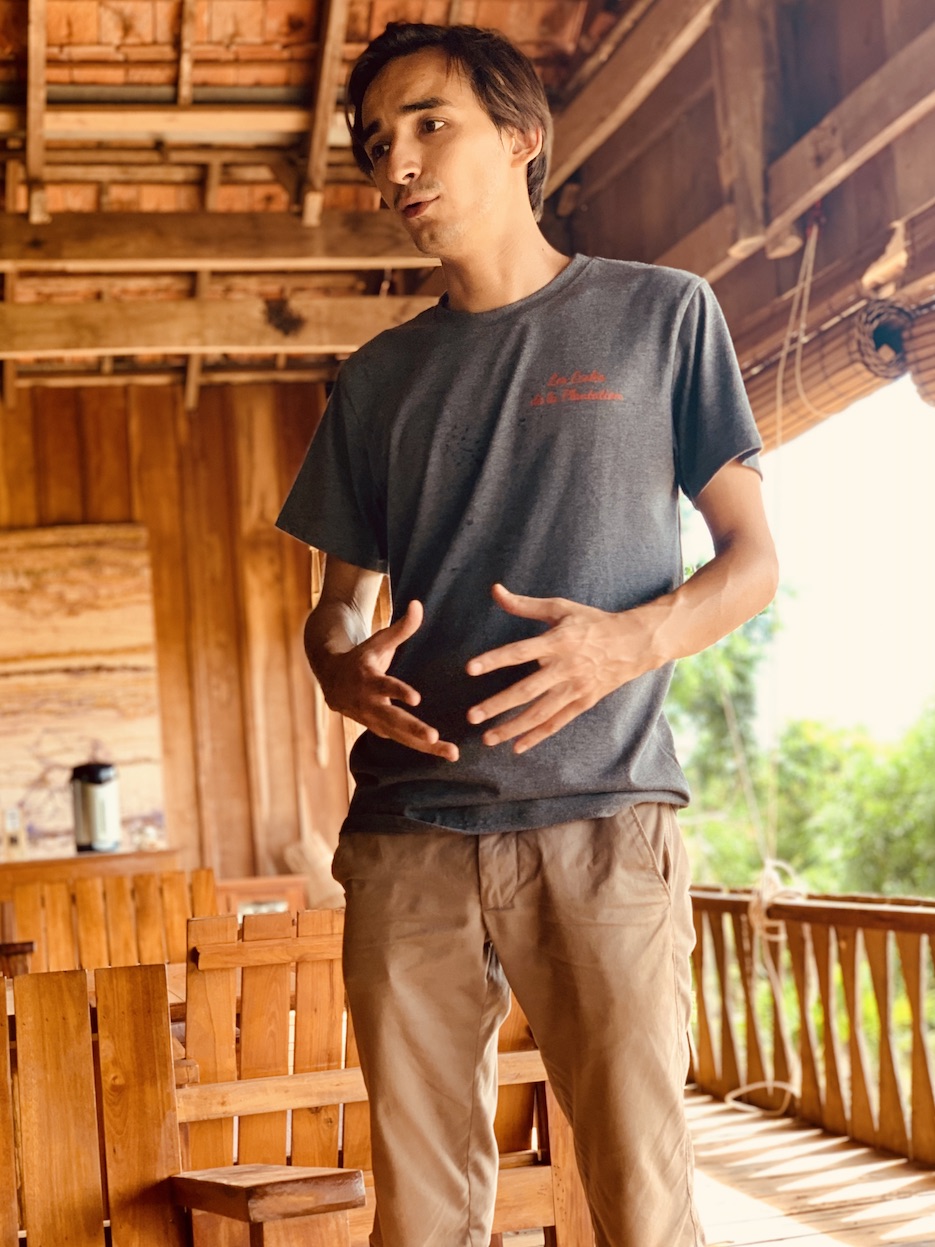 Inside, La Plantation’s brilliantly named Sales Executive Jean-Baptiste Casanova warmly greeted us and we sat down for a chat. He seemed surprised by our arrival, freely admitting that things had been “deathly quiet” over the past few months.

“You’re the first people here today” he revealed, with a wry smile. 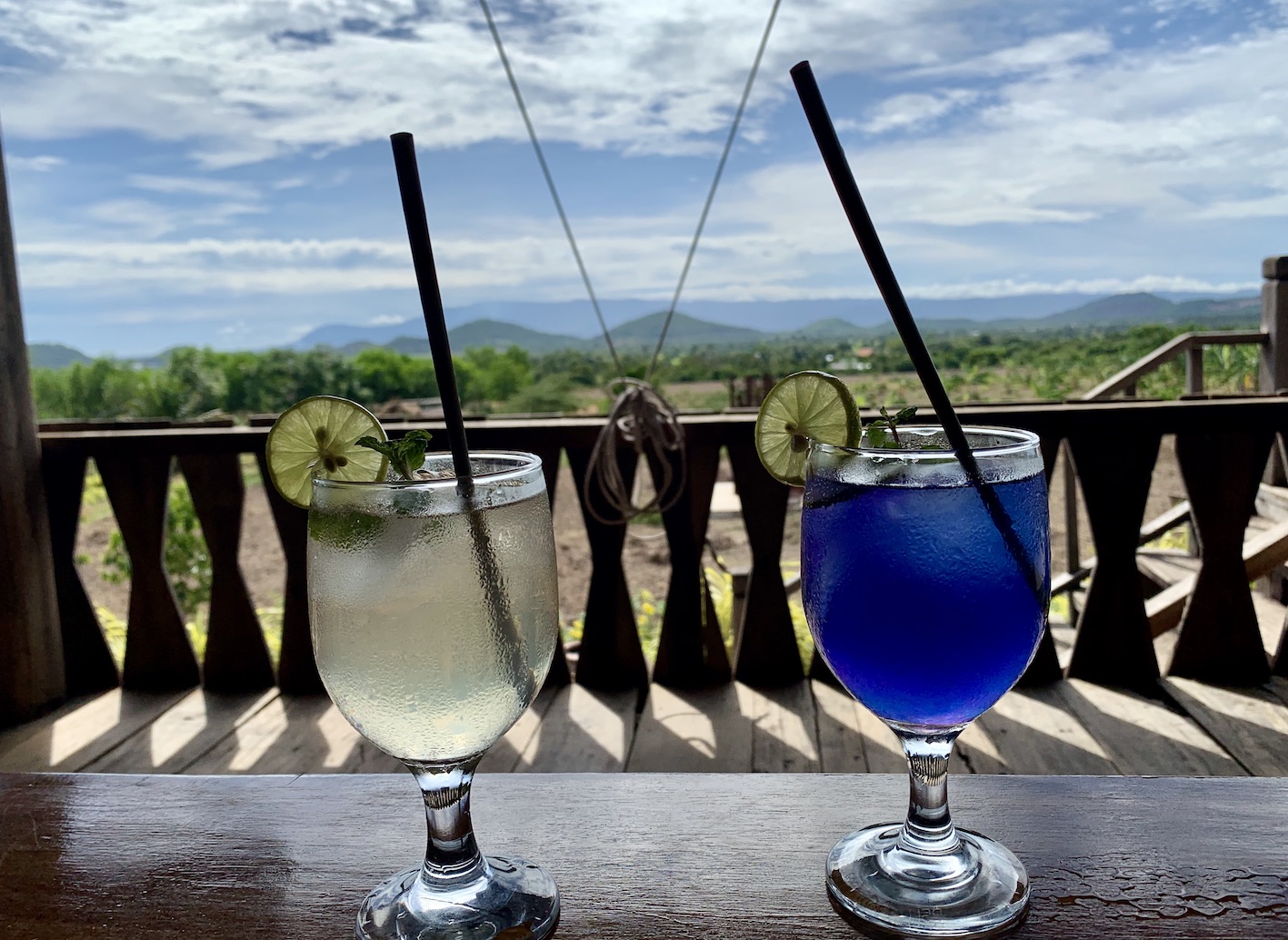 Hot and bothered from our tuk tuk journey, we ordered two of the farm’s signature drinks. That delicious blue creation on the right is a Butterfly Pea Flower Cocktail. Sweet, icy and with sesame seed notes, give it a stir and you’ll see its colour change to a delightful bright purple.

As we sipped on our drinks, Jean-Baptiste told us a little about La Plantation’s short but successful history. The farm opened in 2013, the brainchild of a French woman, Nathalie Chaboche, and her Belgian husband Guy Porré. Both had successful careers in technology, but left it all behind “for a quiet life near the sea”. 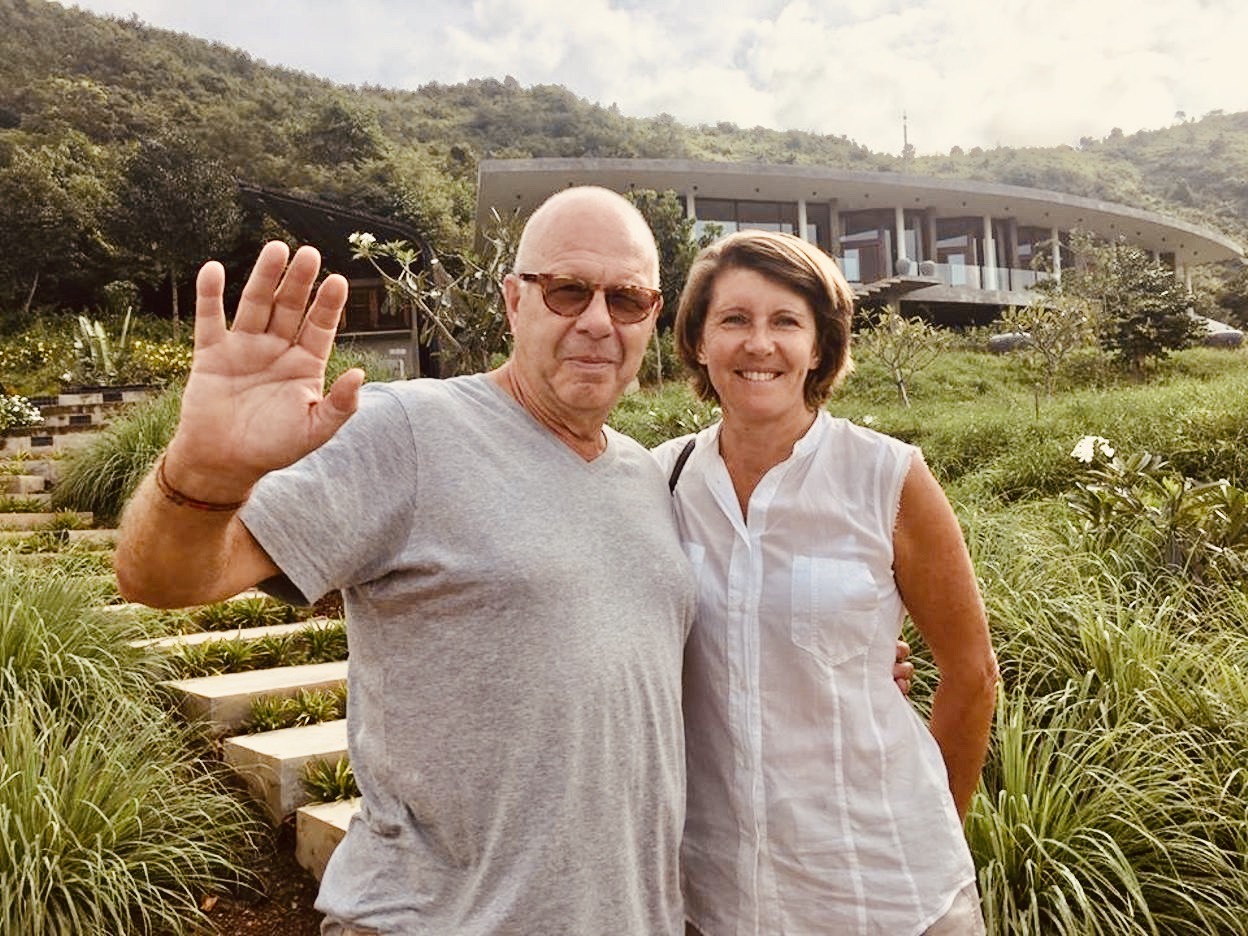 Taking over 99 acres of land, Nathalie and Guy subsequently created Kampot’s largest pepper farm. The farm now has over twenty thousand vines, which produce around 25 tonnes of pepper a year. They employ three hundred people, half of which work for La Plantation full time.

Jean-Baptiste, who graduated from the word’s top hospitality management university in Switzerland, says he came to La Plantation because he was convinced by the project. Namely developing a sustainable company that provides unparalleled life opportunities to local farmers.

He arrived just a few months earlier, right in the middle of the pandemic. “Yeah, it was a nightmare” he grinned. “But totally worth it, I mean look at that view”. 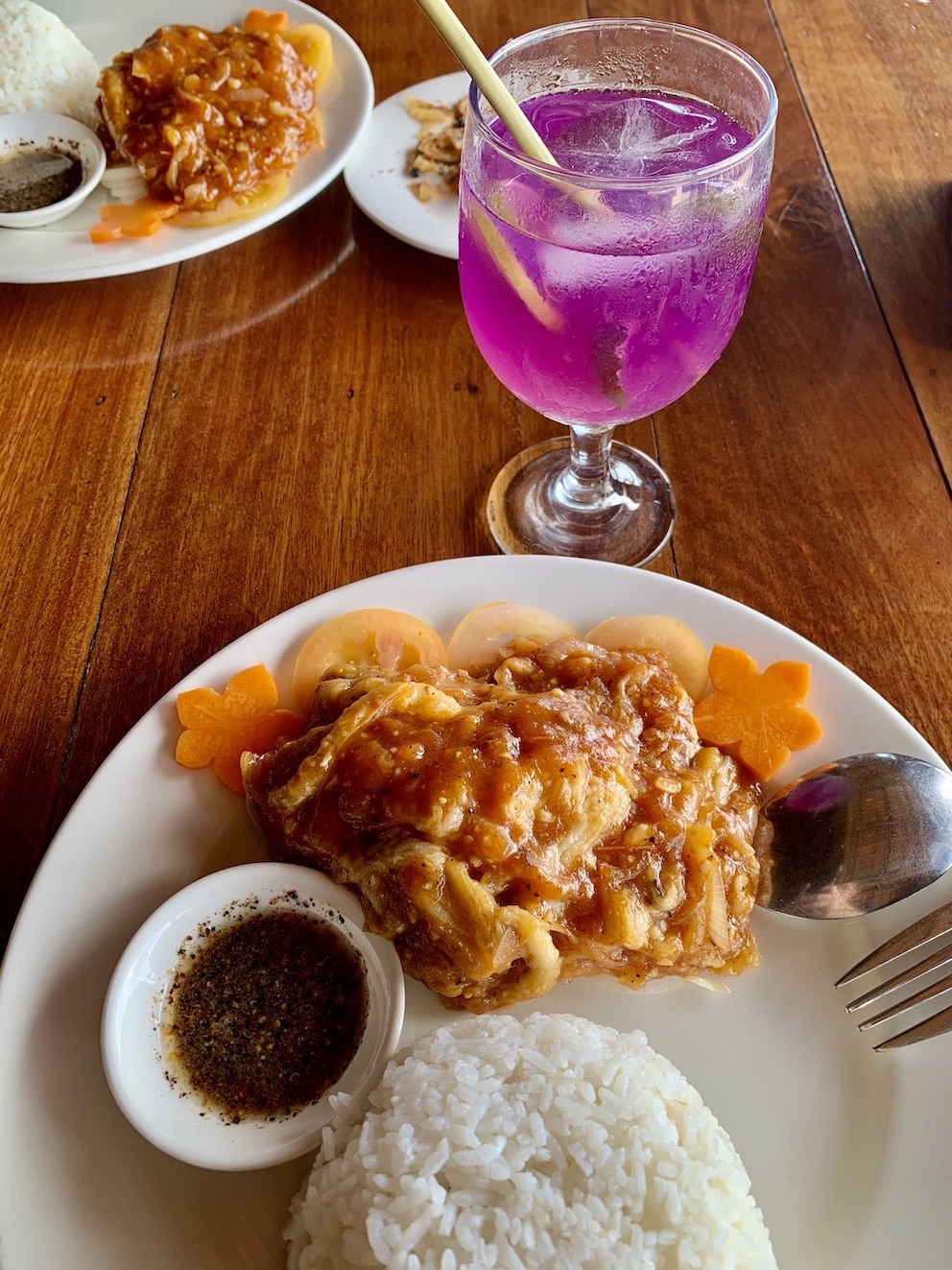 Sladja and I were so comfortable we decided to get some food too. Usually, La Plantation has a full menu featuring traditional Khmer dishes and a rotisserie. That day however, because of staff shortages, they could only offer Smoked Eggplant with White Rice. It was wonderful and, crucially, we got our first taste of their famous black pepper. 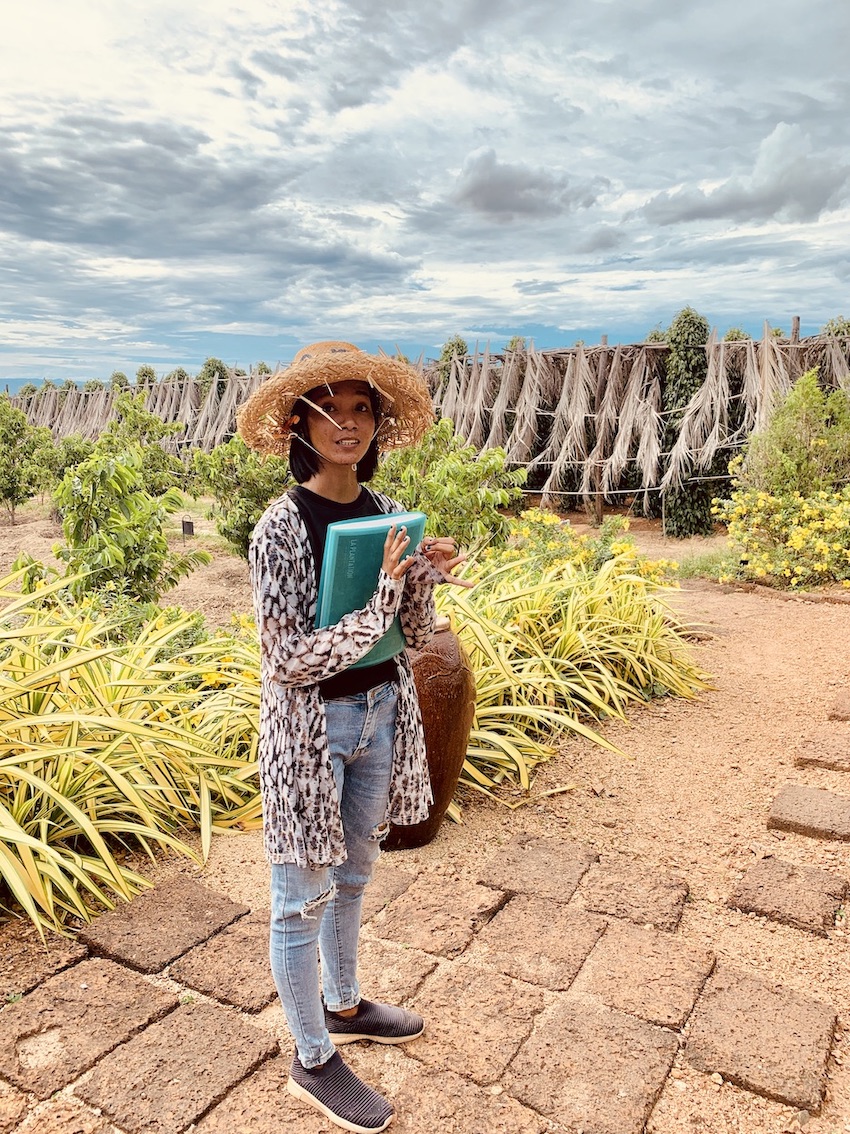 Visitors can take a stroll around the farm with a guide. Offered in English, French and Khmer, the tour is free of charge and takes just half an hour. You also get a cute farmer’s hat to keep the burning sun at bay. 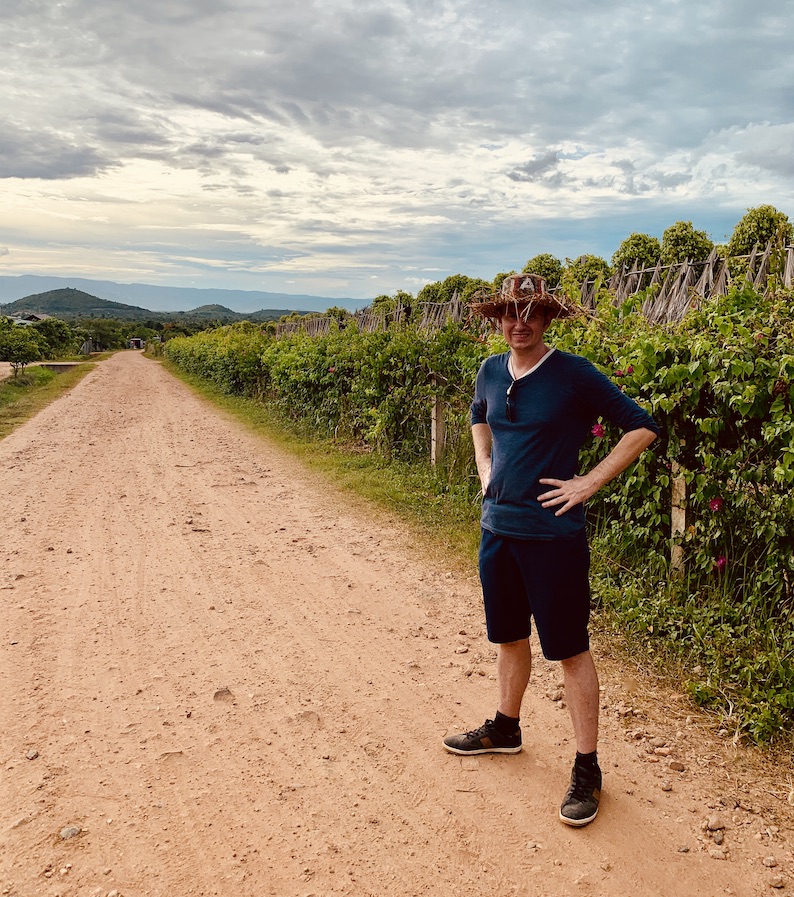 Making our way to the first section of neatly arranged peppersticks, our guide gave us a much needed potted history of Cambodian pepper production.

She told us how locals have been farming it for centuries. And that there was a huge boom in the early 1900s when French colonialists began exporting vast quantities back to France. 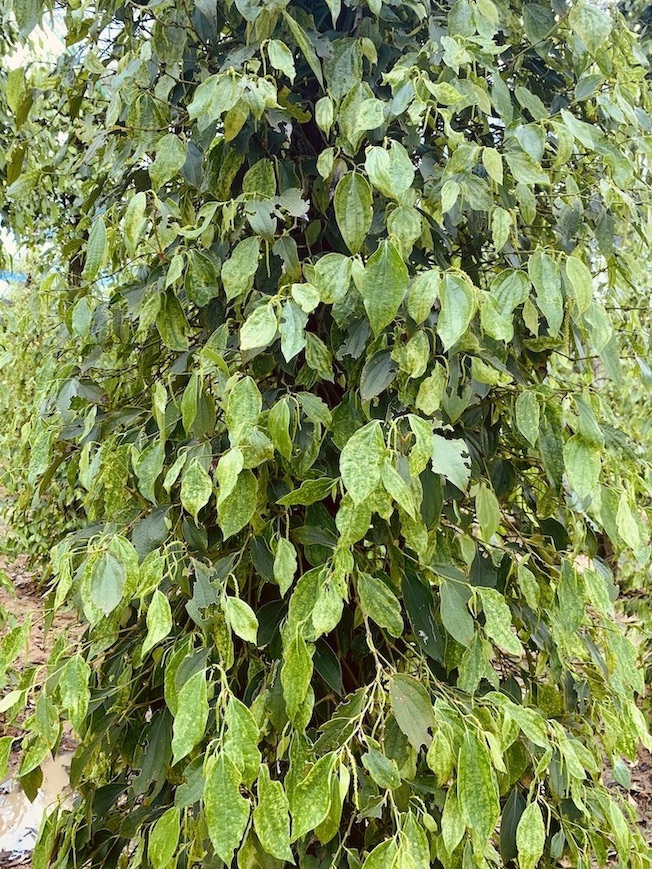 Like everything else they touched in Cambodia, The Khmer Rouge came close to destroying the industry in the late 1970s when they forced farmers into becoming soldiers. It took a long time for the region to bounce back. Indeed, by the end of the 1990s, Kampot was producing no more than 2-3 tonnes of pepper annually. 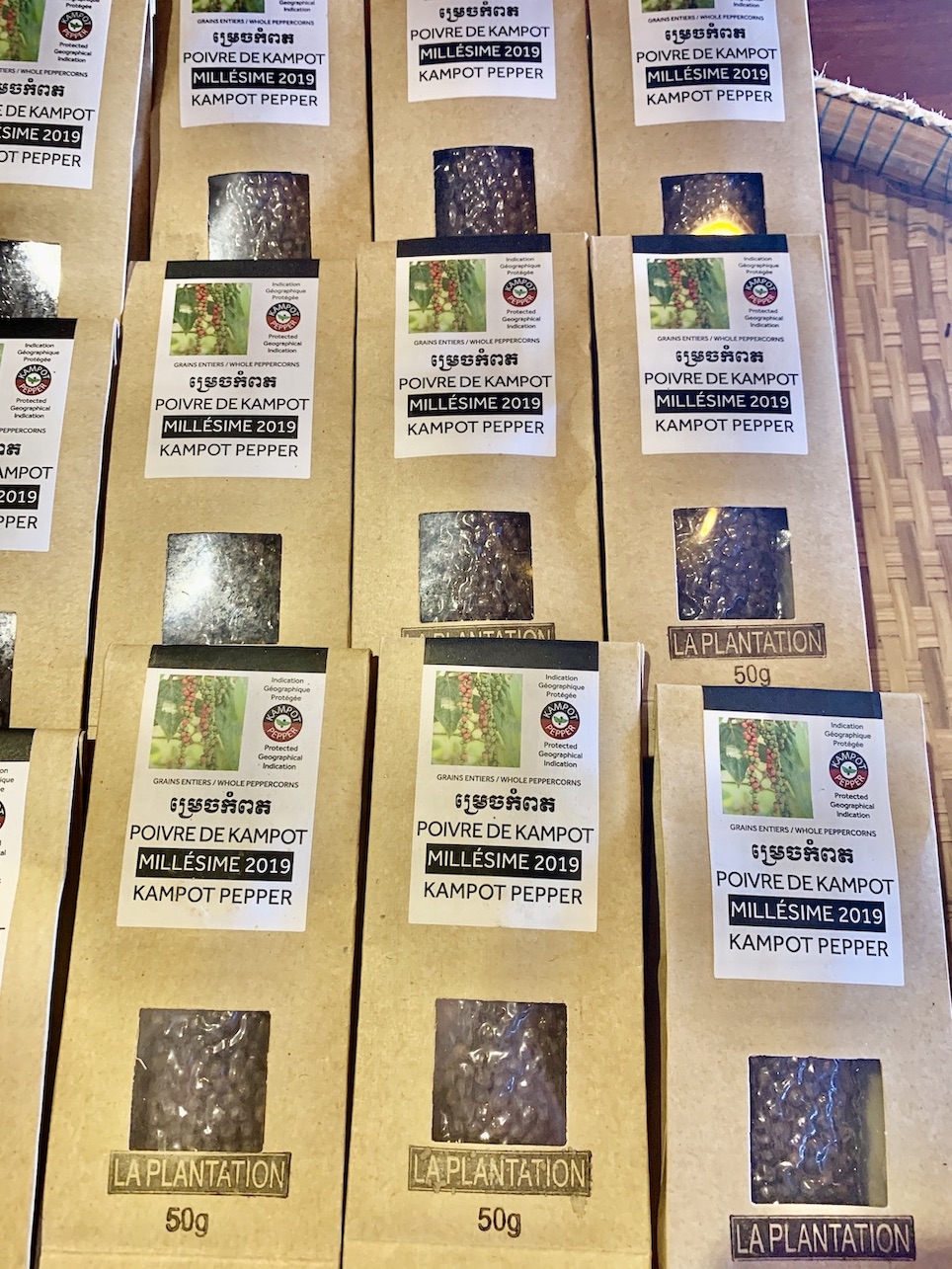 Nevertheless, the rebuilding process continued, eventually heralding the birth of The Kampot Pepper Promotion Association. In 2016 The EU gave farmers a huge boost by awarding the province a prestigious Protected Geographical Indication status. In short, they were saying: “Listen up everyone, you know Kampot Pepper? That shit’s for real!” These days Kampot exports over 100 tonnes a year. 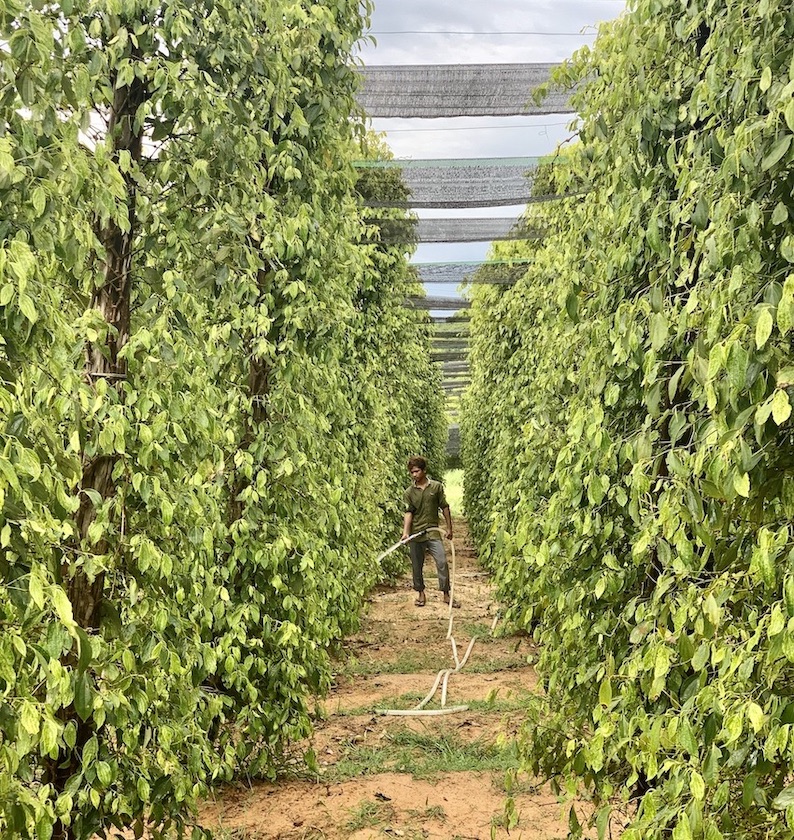 The pepperstick forests really are handsome, all bushy and a deep summer green. There was a worker watering them that afternoon, which has to be done every few days.

Much to my surprise, I learned that pepper plants don’t like sunlight all that much! Which is why the sticks are protected by a layer of crispy dried bamboo leaves. 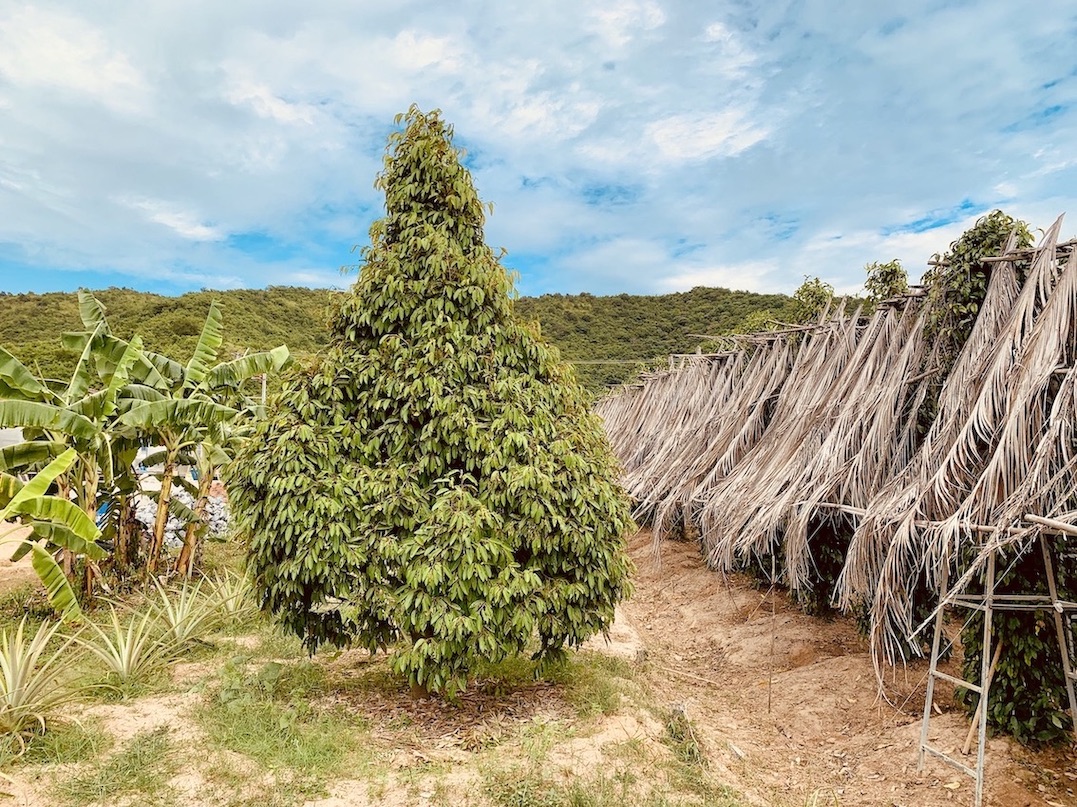 Furthermore, it takes around three years for one of these towering sticks to fully mature. And that’s assuming there isn’t a drought or some kind of crazy flood. The nurturing is done by hand, from the soiling and checking, to the watering, picking and drying.  And of course the entire process is organic from start to finish.

La Plantation produces the full range of peppers, including black, white and red, although in the beginning they all start out green. White peppercorns are the most expensive, at around $100 an ounce. 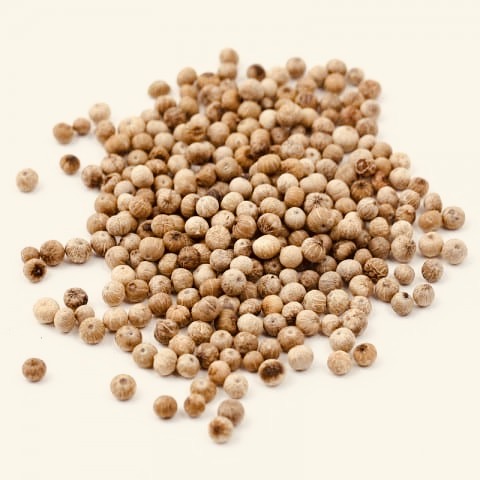 In addition to pepper, they also farm bananas, dragon fruit, passion fruit, mangos, pineapples and more. The free tour takes you past all these plantations, which is fun to see. The whole farm is beautiful, impeccably kept and framed by a backdrop of rolling hills. 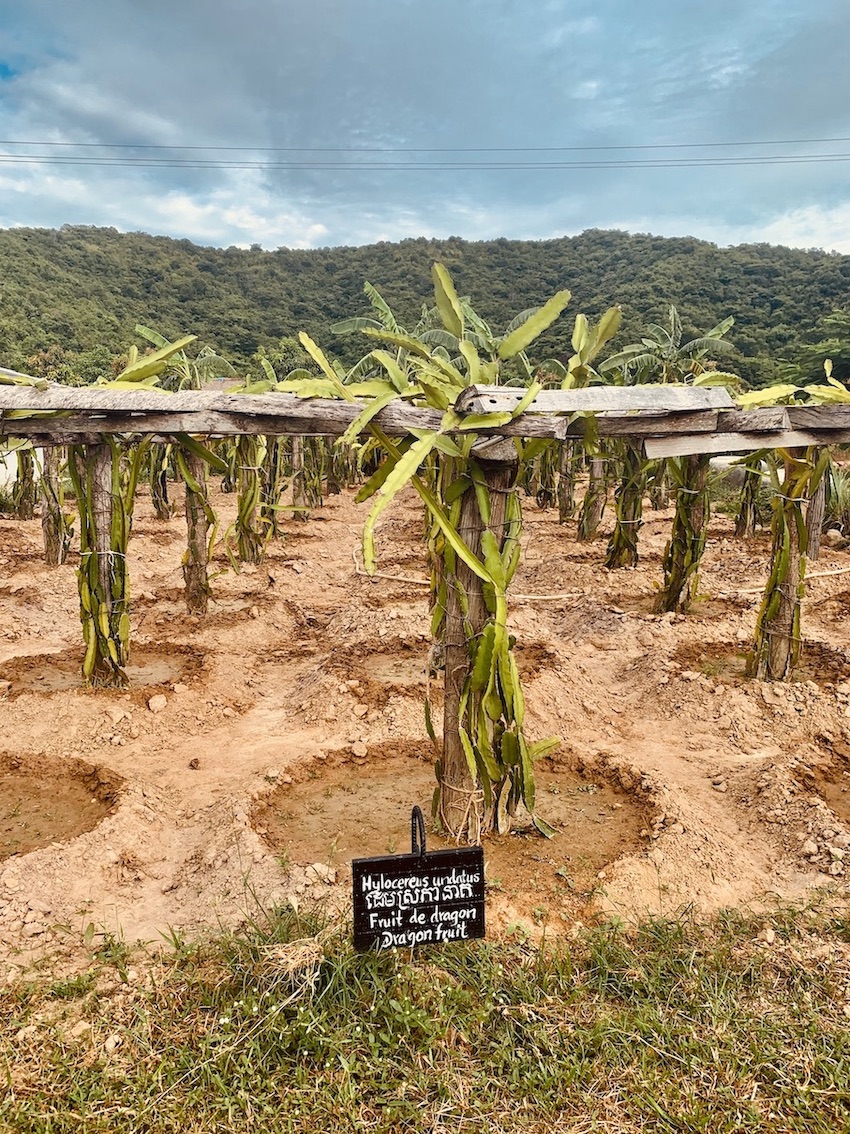 Like all the best businesses we’ve profiled in Cambodia, La Plantation invests in and supports the local community. As well as growing their own pepper, they also buy from small farms for a fair price. This cuts out the shady middlemen who’ve been keeping local farms in a state of financial stagnation. They then find a market for them, ensuring better sustainable relationships.

What’s more, Nathalie and Guy are committed to improving the standards of local education. They have their own education centre onsite, in one of those gorgeous old Khmer houses. Here, local children can take French and English classes. They also finance a local primary school and have developed a scholarship program where students receive free transport, clothing, books, material and food. 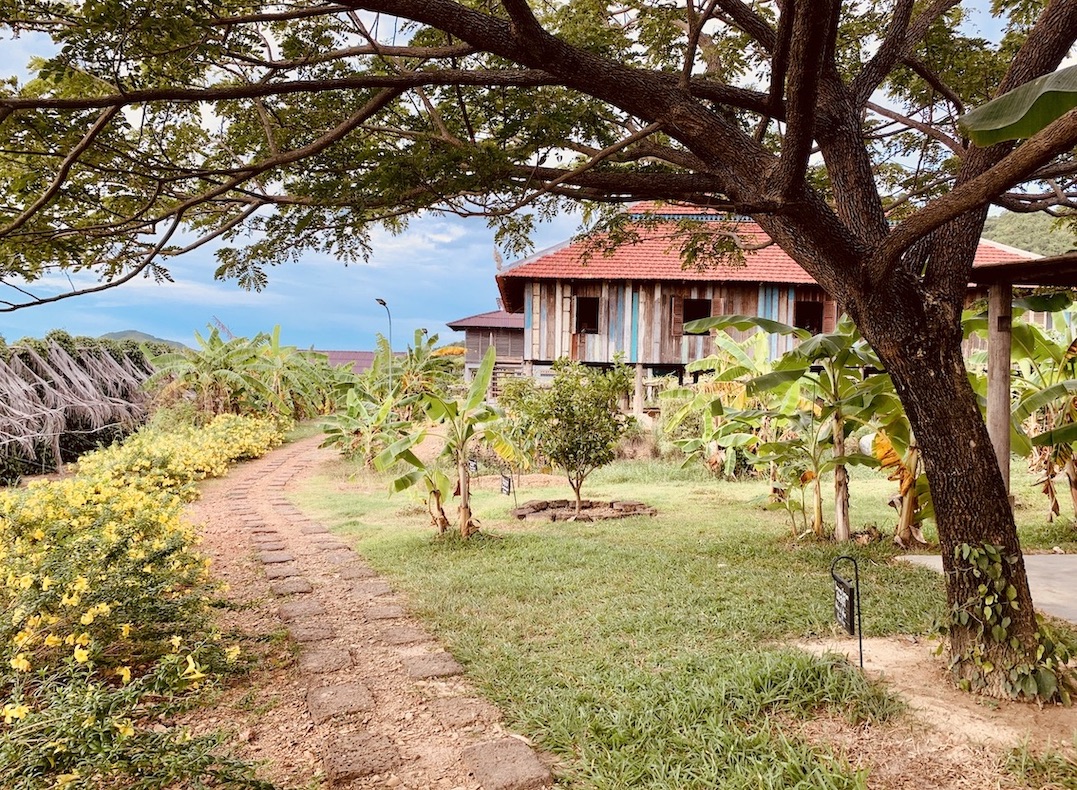 The school at La Plantation.

Back in The Welcome Hall, it was time for our Pepper Tasting, included in the free tour. Presenting us with a packed wooden tray of spices, our guide encouraged us to try all the different blends. There were so many we could hardly keep up as she introduced each type and its different aromas and flavours. 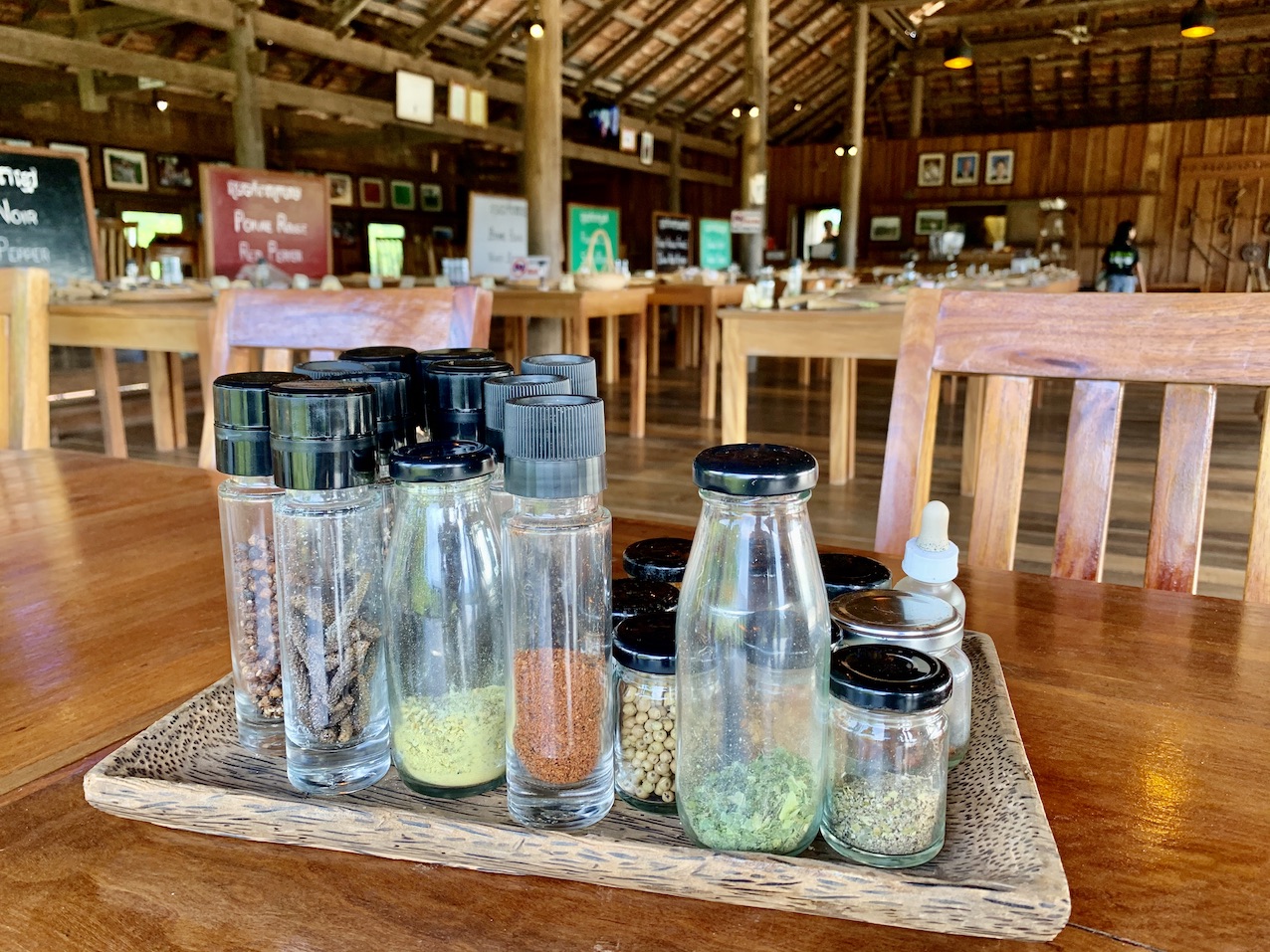 There were a few favourites. Take the Millesime 2019, for example, with its black chocolate colour and tantalising mix of sweetness and spiciness. Used for chocolate cake and cream brûlée, but also certain types of pasta and rice. 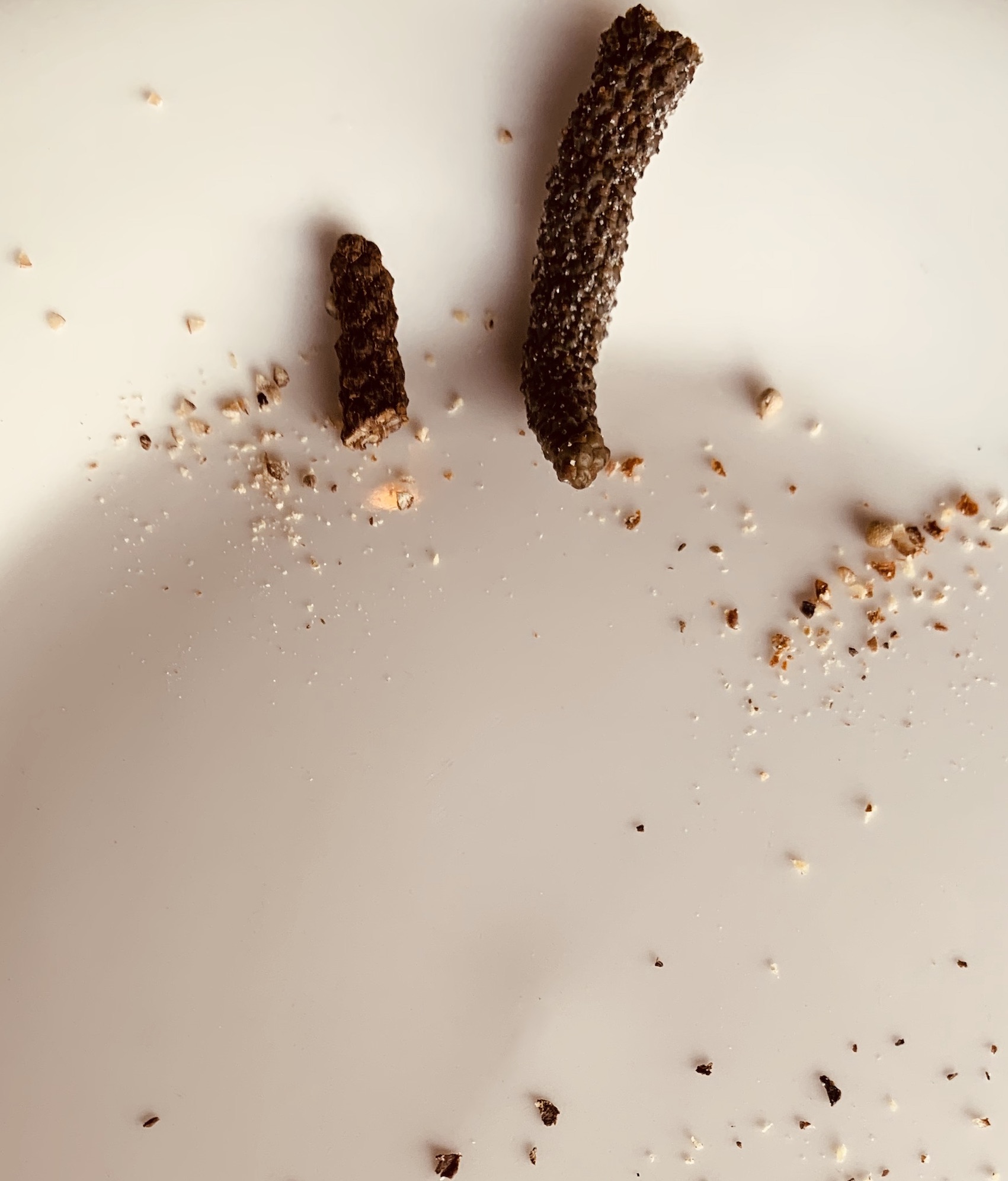 I’d never visited a pepper farm before. Thus La Plantation went down as yet another unique experience from our 2020 Cambodian adventures.

I should also point out that, when things are running normally, they hold cooking classes. And you can take The Buffalo Tour, where visitors clunk around the village lanes to The Secret Lake in a buffalo-pulled water cart. 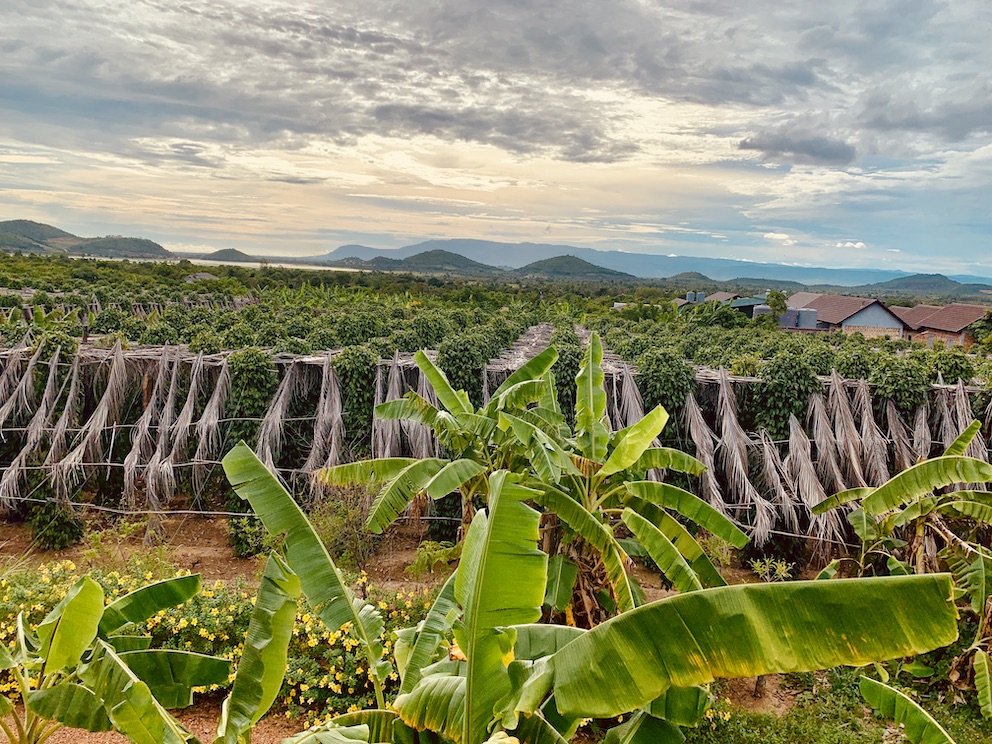 For more on La Plantation, here’s their website. To see a great vlogging review, take a look at this video from Jack and Gab Explore.