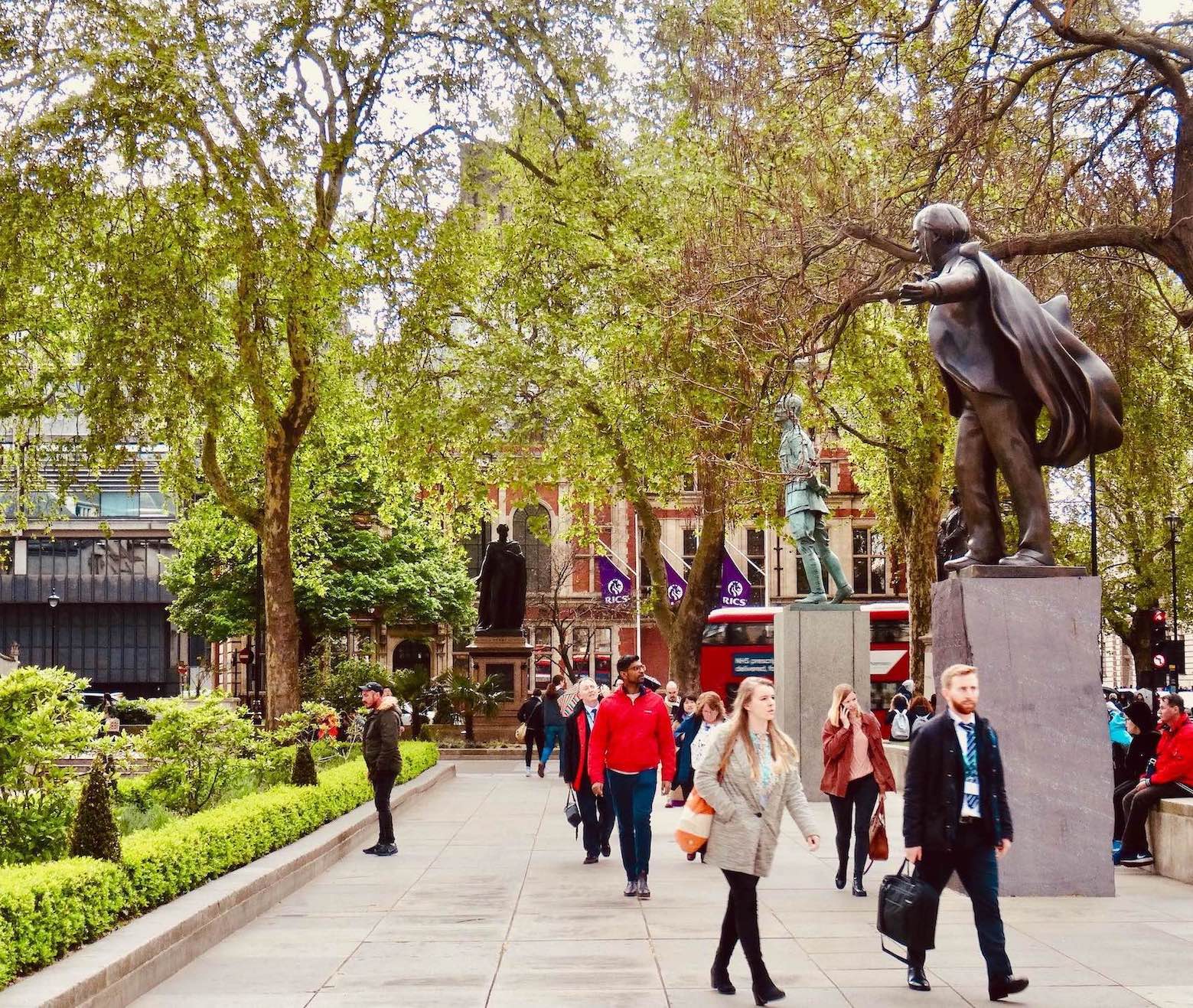 If you’re into historical monuments, London has got your back. According to several online articles, there are around 1500 monuments in London celebrating iconic figures from Britain and beyond. Indeed one could spend months tracking them all down, if you were so inclined.

Call me lazy, but I decided to head to one of London’s best monument-hunting spots. A place where you can see twelve of the city’s most notable monuments in one compact space. Step forward Parliament Square! Located right in the heart of central London, the square sits a stone’s throw from The Palace of Westminster and Westminster Abbey. 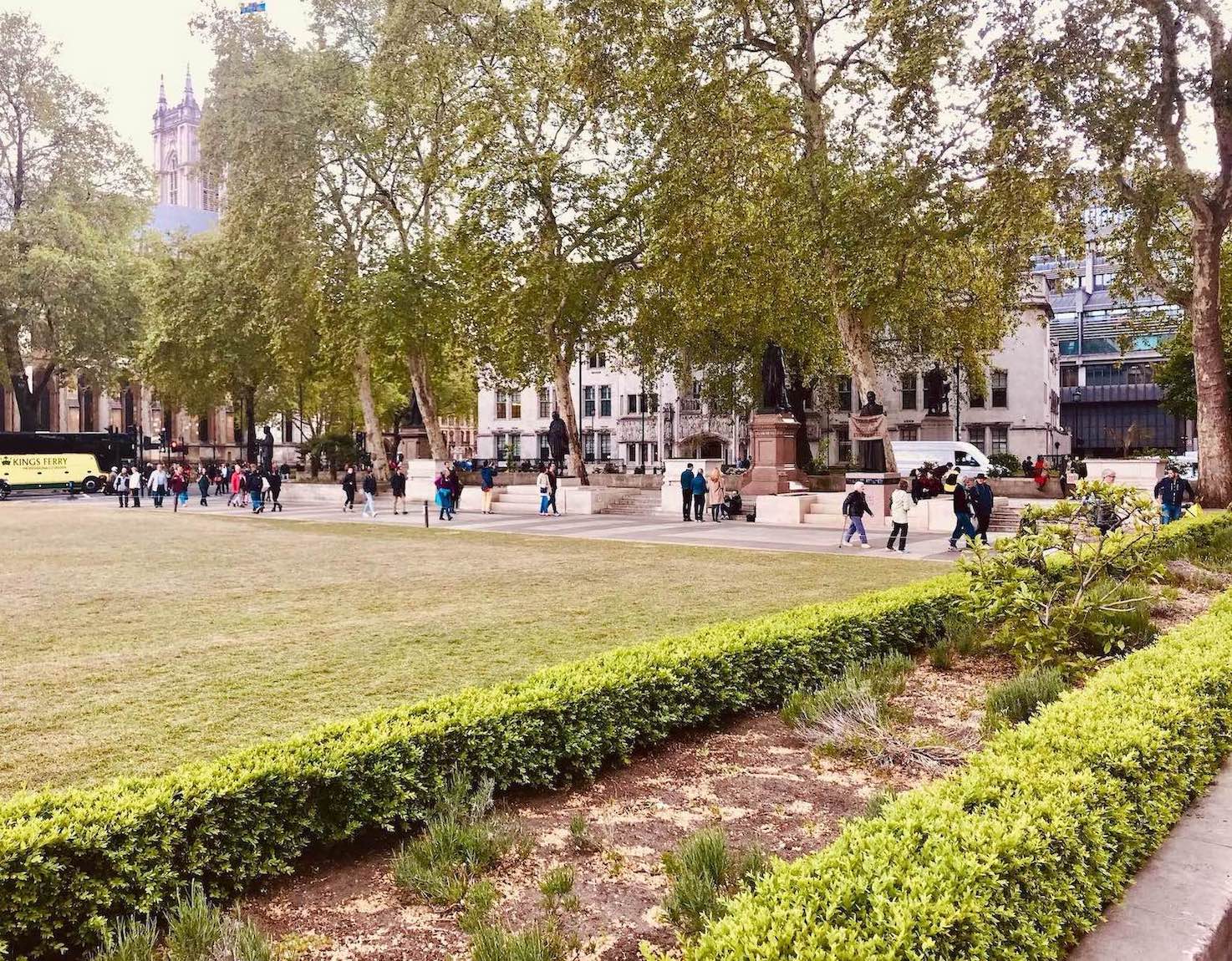 In 1868 the British government was busy rebuilding the Houses of Parliament following a devastating fire in 1834. The project was now into its 18th year, while plans were also underway to redevelop a number of surrounding streets. One of these proposed projects was a brand new public square with a bit of greenery. Moreover, they wanted a design that would help traffic flow in what was a highly congested area. 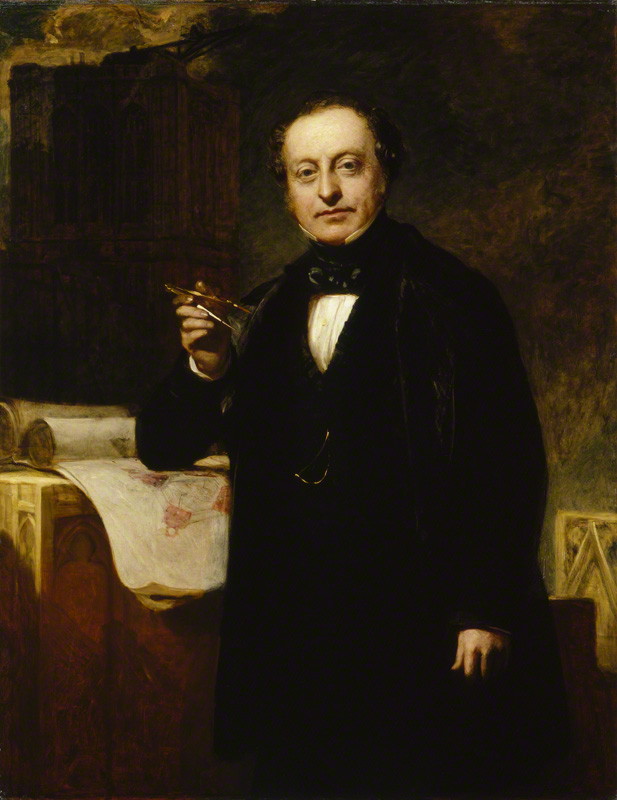 The famed architect Charles Barry, who designed the new Houses of Parliament, also laid out plans for Parliament Square. He subsequently passed away in 1860, but his work lived on in the new Parliament Square, which opened at the end of 1868.

In those early years the square was a simple affair, just a scattering of trees, some public benches and the elegant Buxton Memorial Fountain that now sits in Victoria Tower Gardens. However, Parliament Square did become the location of the city’s first traffic lights that year. Later, in 1926, Britain’s first roundabout joined the party. It’s not sexy history, but hey, I’ll take what I can get. 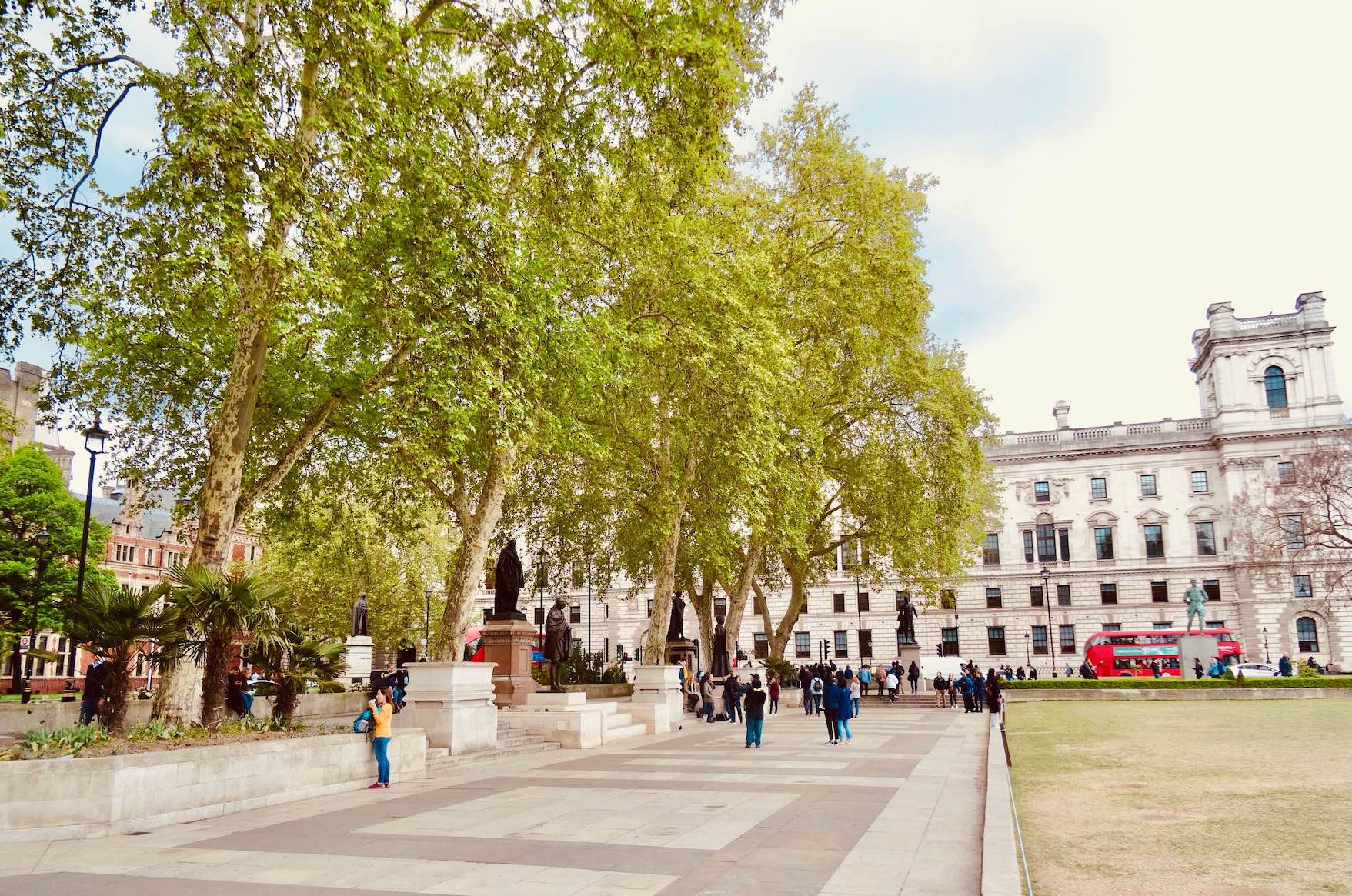 The square we see today, with its central green, dates back to a redesign carried out by the British architect George Grey Wornum in 1950. Its first monument arrived way back in 1874 with a tribute to former British Prime Minister Edward Smith-Stanley, the 14th Earl of Derby. 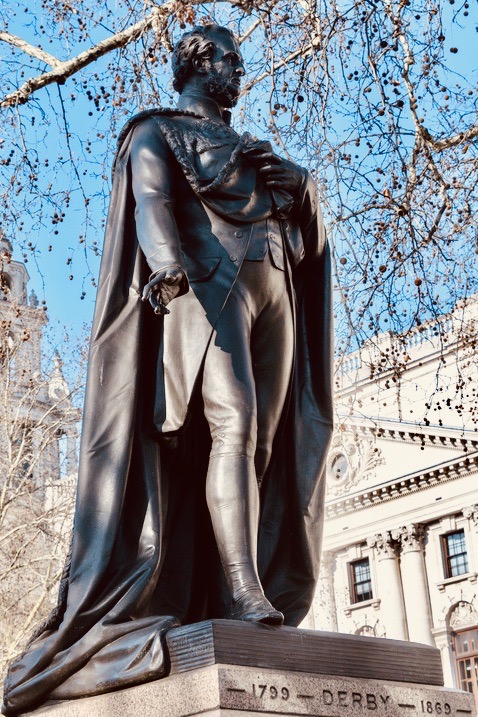 I was a touch embarrassed that I’d never heard of him. But actually Smith-Stanley was a three time prime minister who, according to several historians, created the modern Conservative party. An achievement that has largely been attributed to Benjamin Disraeli. His statue shows him dressed in robes for his role of chancellor at Oxford University. 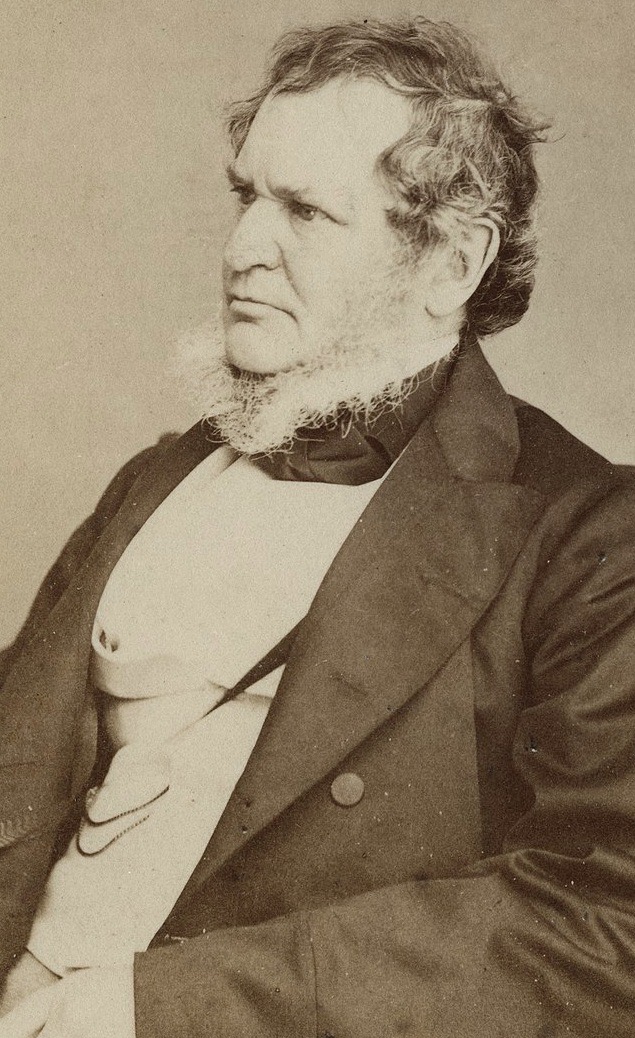 Not once… not twice… but three times a prime minister.

In 1876 Parliament Square got its second monument, in honour of another former prime minister. This one was for Henry John Temple, the 3rd Viscount Palmerston. He was a two time leader, who had a firm grip on British foreign policy at the height of its imperial powers between 1830 and 1865. 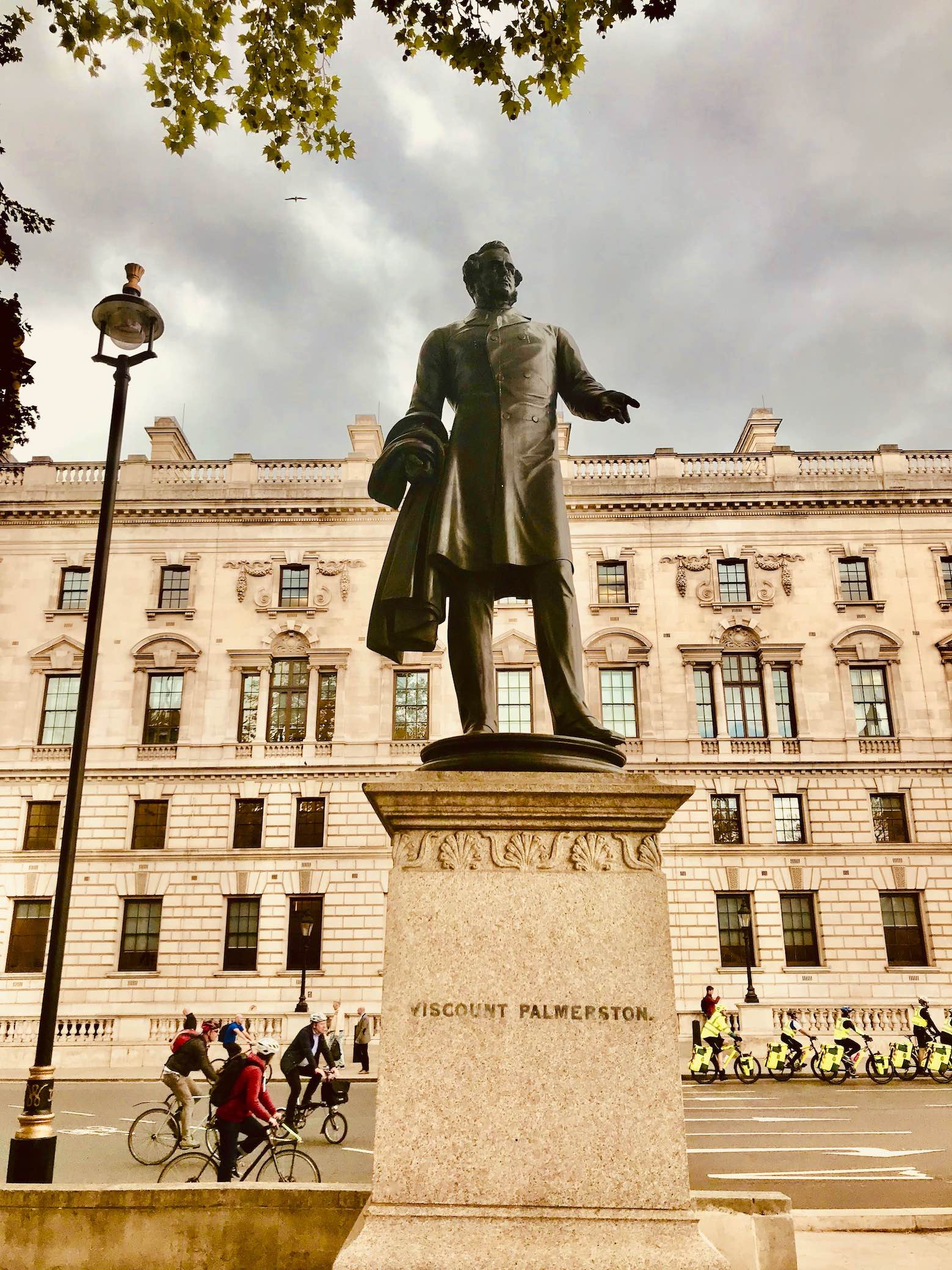 Just a glance over Lord Palmerston’s life makes for fascinating reading. He was, for example, the first leader of the newly formed Liberal Party in 1859. He was a man adored by the public for his dynamism and ability to stir up British nationalism.

But he also fell out with Queen Victoria over what he saw as royal meddling in foreign policy. And had a public feud with longtime rival William Ewart Gladstone. At the time of writing he is the last British prime minister to die while still in office. 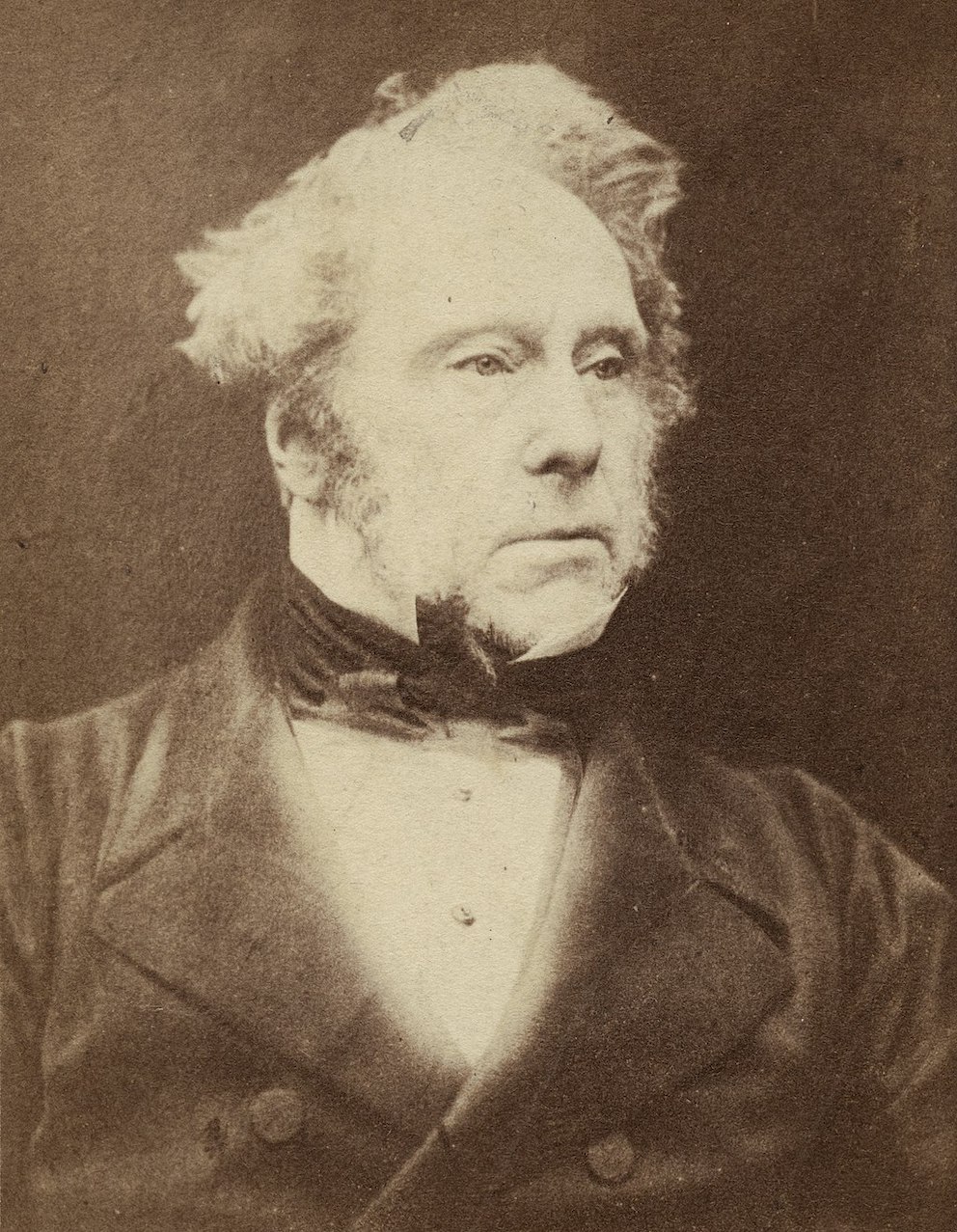 Next, I found myself face to face with the last Liberal Party PM, David Lloyd George. In office between 1916 and 1922, George led Britain through the final years of The First World War. As Britain’s only Welsh prime minister, and as a key player in The Paris Peace Conference (1919-1920), it is perhaps surprising that his statue didn’t make it onto Parliament Square until 2007. 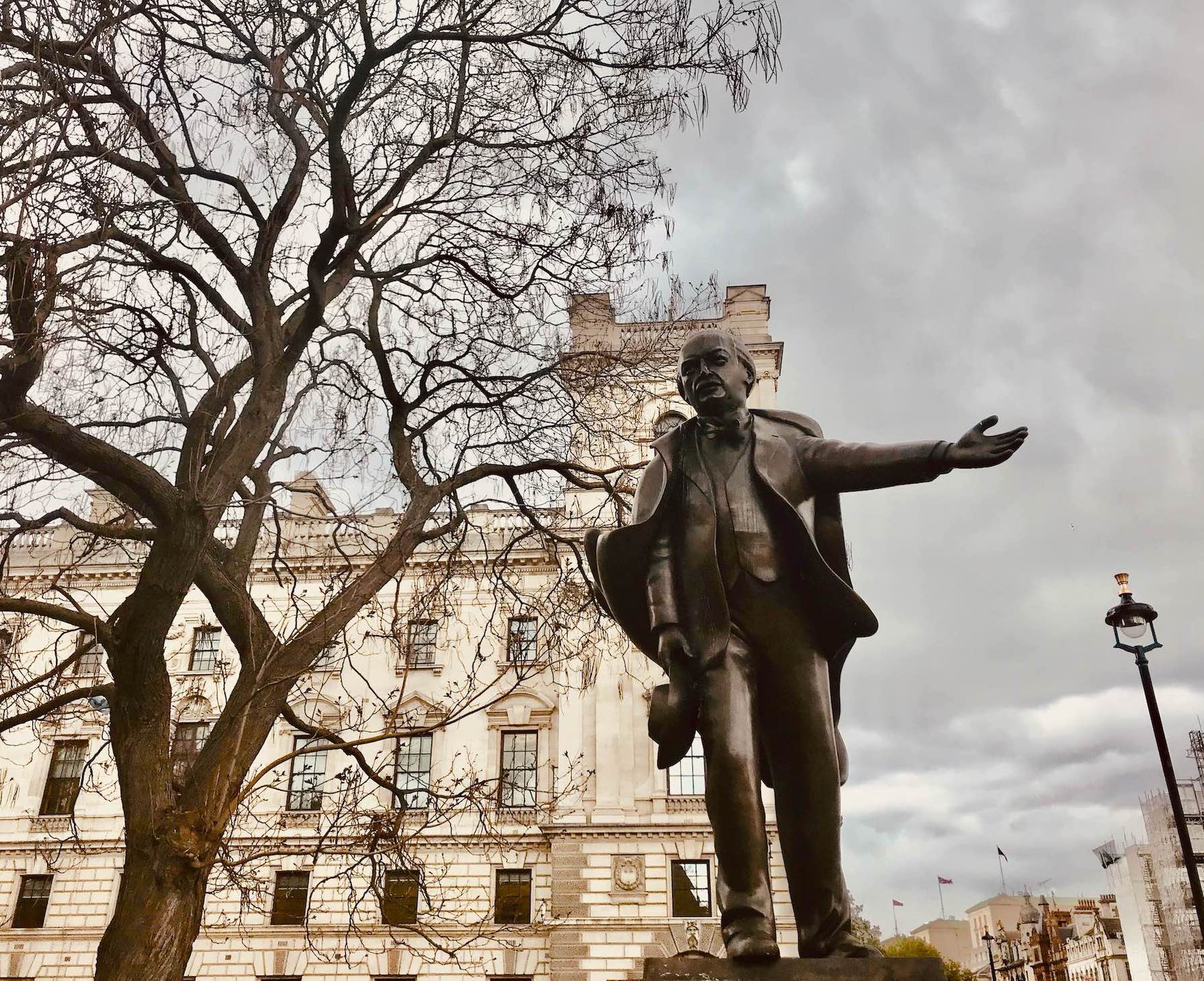 I didn’t photograph all the statues that afternoon. Rather, I soon found myself gravitating towards familiar faces. Instinctively, I just knew Winston Churchill had to be in here somewhere. And there he was, holding court over the northeastern edge of the green. 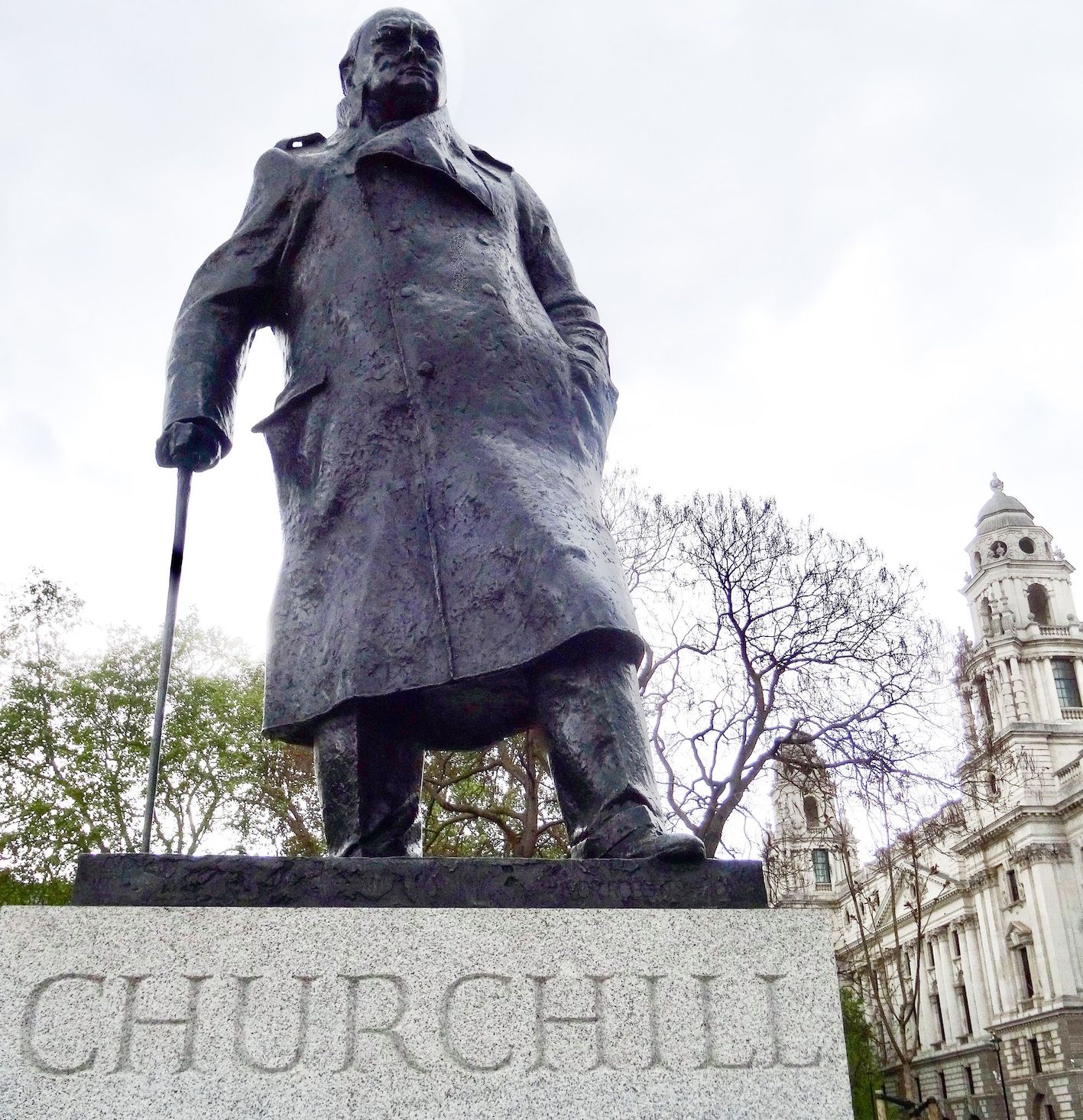 Churchill’s statue received its official unveiling on the 1st of November 1973. His wife Clementine was in attendance that day, along with the monument’s creator, Ivor Roberts-Jones. Amusingly, the artist’s first sculpture got roundly rejected because he made Winston look “too much like Mussolini”. 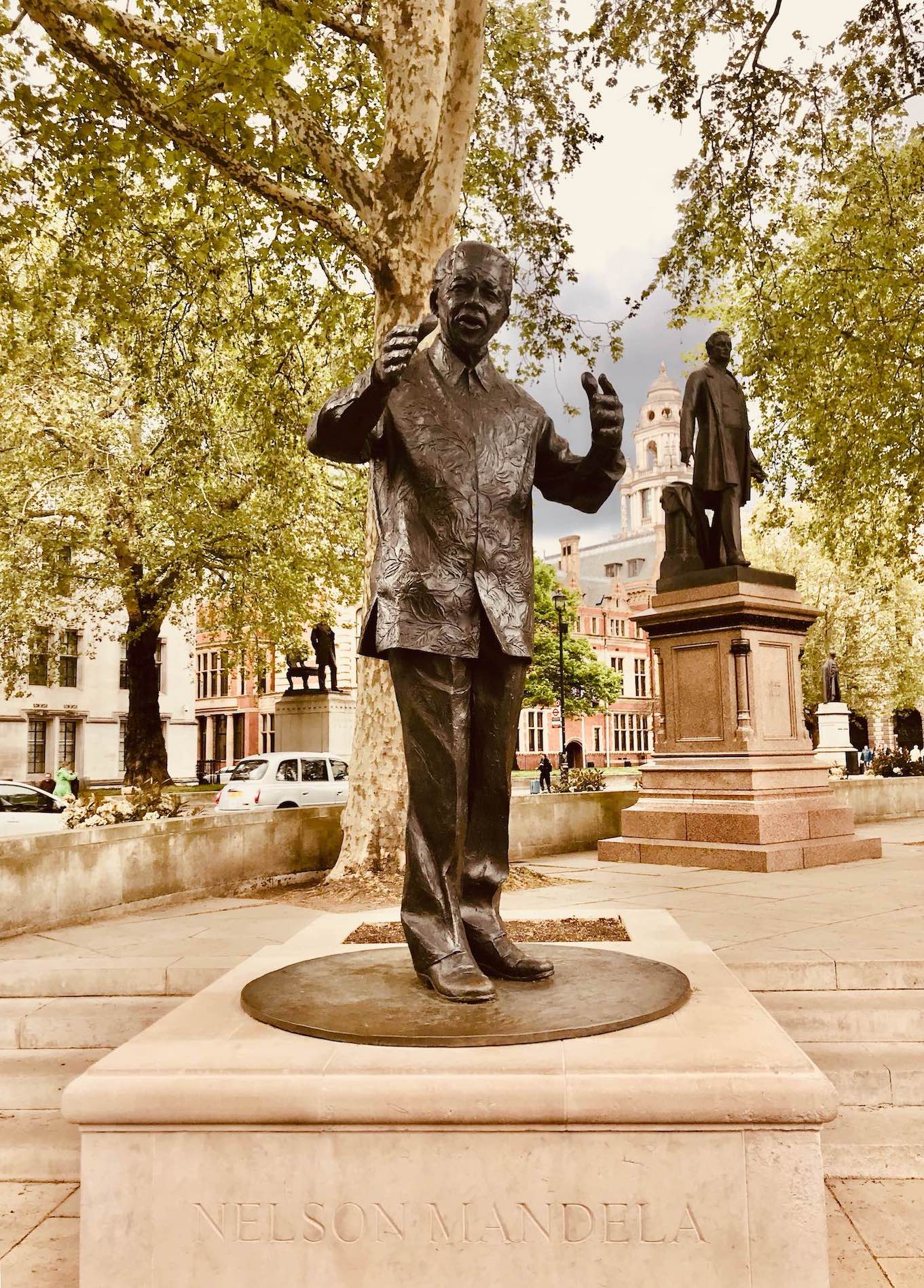 Nelson Mandela‘s Parliament Square monument was unveiled on the 29th of August 2007 at the green’s southwestern edge. Then Prime Minister Gordon Brown attended the ceremony, in addition to the anti-apartheid activist Wendy Woods. Oh, and her plus one, the actor and filmmaker Richard Attenborough.

Parliament Square’s Mahatma Gandhi statue came in 2015. Its creator, the award-winning Scottish sculptor Philip Jackson, based his work on a photograph of Gandhi standing outside the offices of British Prime Minister Ramsay MacDonald in 1931. 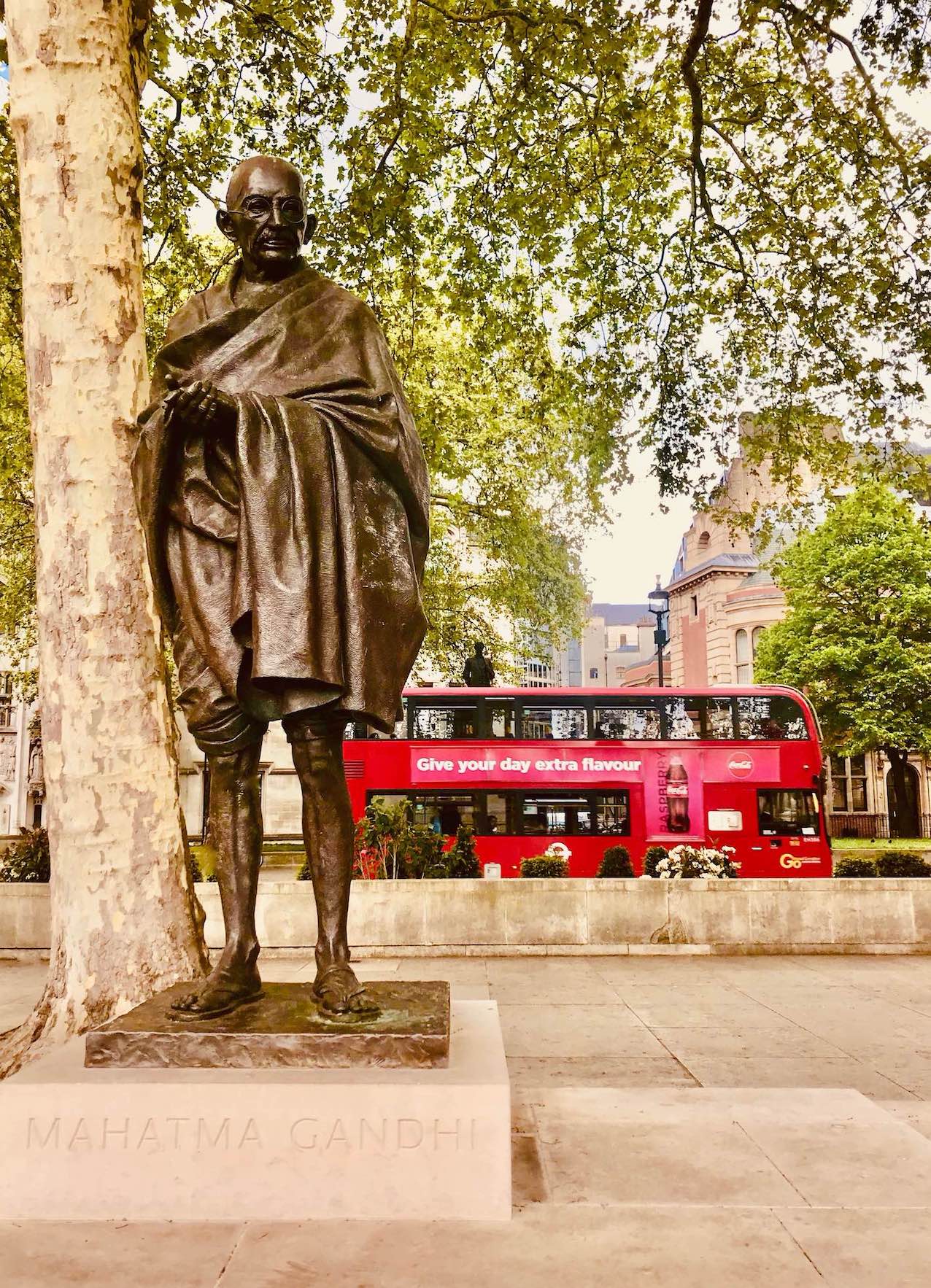 The statue commemorates the centennial of Gandhi’s return to India from South Africa in 1896. It was a visit that historians generally accept as the beginning of his campaign for Indian independence. On the day of the monument’s unveiling, Gandhi’s grandson Gopalkrishna joined Prime Minister David Cameron and Bollywood star Amitabh Bachchan. 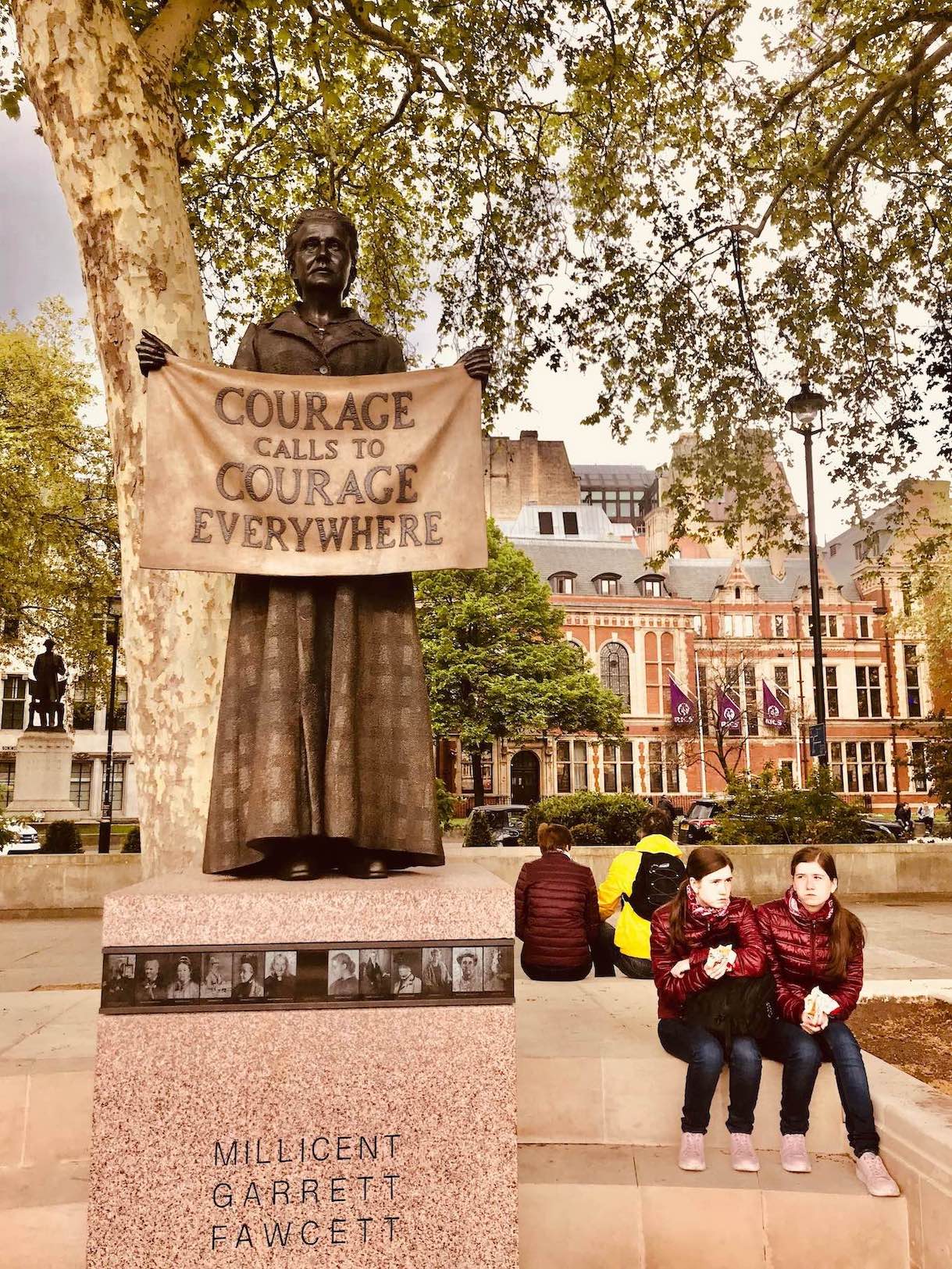 Parliament Square’s most recent addition was the monument to Dame Millicent Garrett Fawcett, a tireless campaigner for women’s rights in the 1890s. Unveiled on the 24th of April 2018, Fawcett is the first woman to be honoured here. 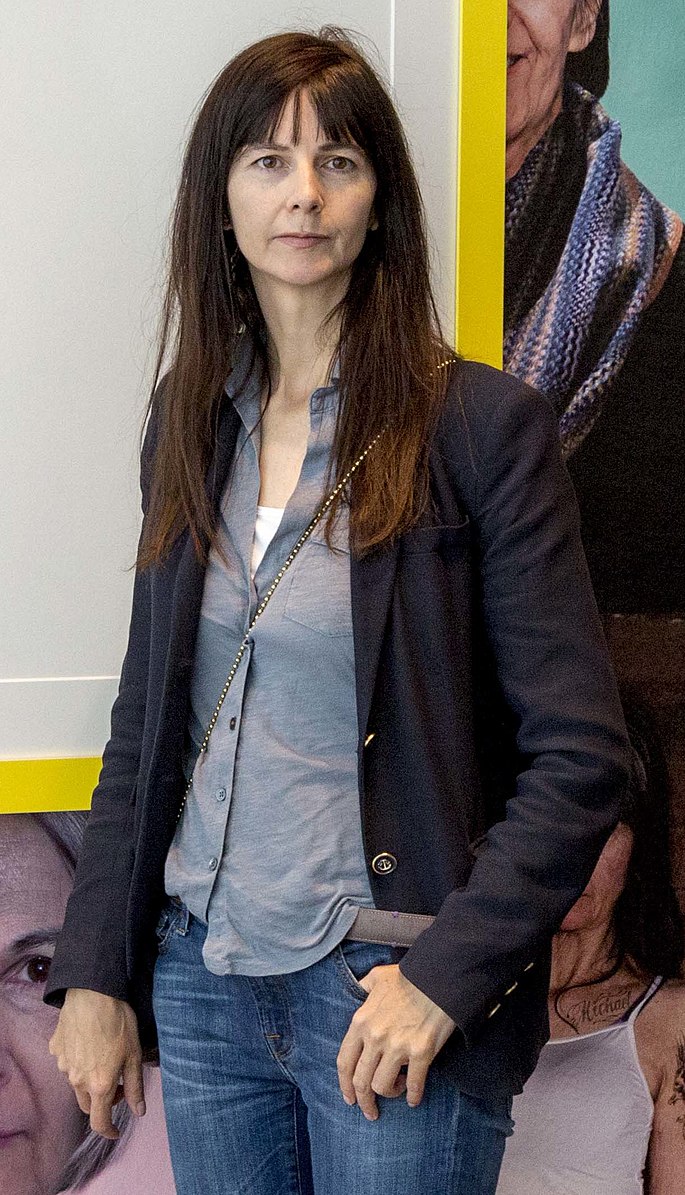 Furthermore, the artist Gillian Wearing is the first female sculptor to have her work exhibited on Parliament Square. As fate would have it, just a few weeks later I found myself visiting an excellent exhibition on how Wearing made the sculpture. For the full story, check out my article on Firstsite Art Gallery in the English town of Colchester. 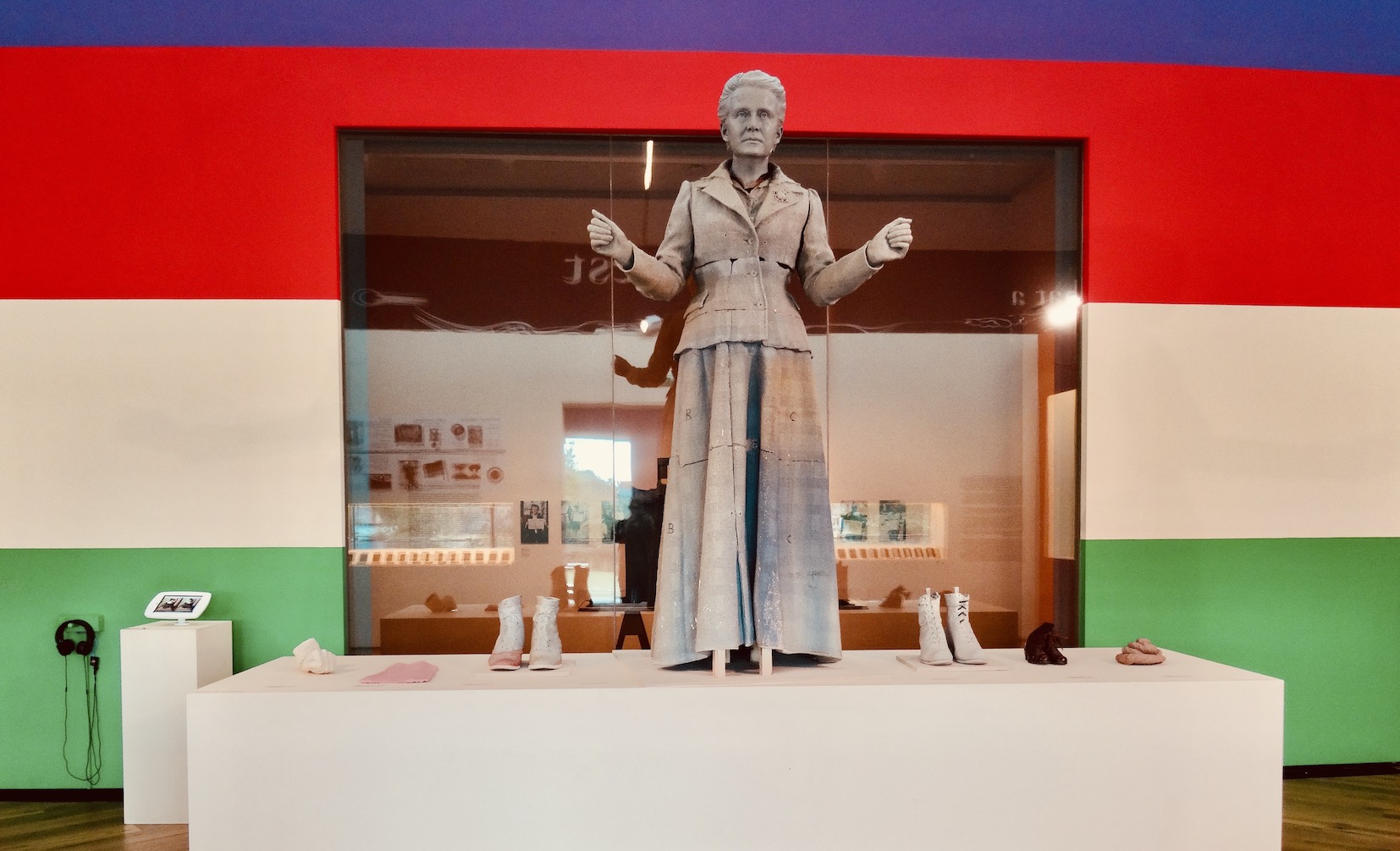 Parliament Square’s eastern side is a popular spot for protests and political rallies. You may also see protestors scattered around the streets running off the square, as I did on my way to Westminster Bridge.

This friendly, softly spoken guy had been there for over a year when I stopped for a brief chat. In fact, he felt so strongly about it that he’d recently gone down to part time working hours so that he could spend more time at his protest station. 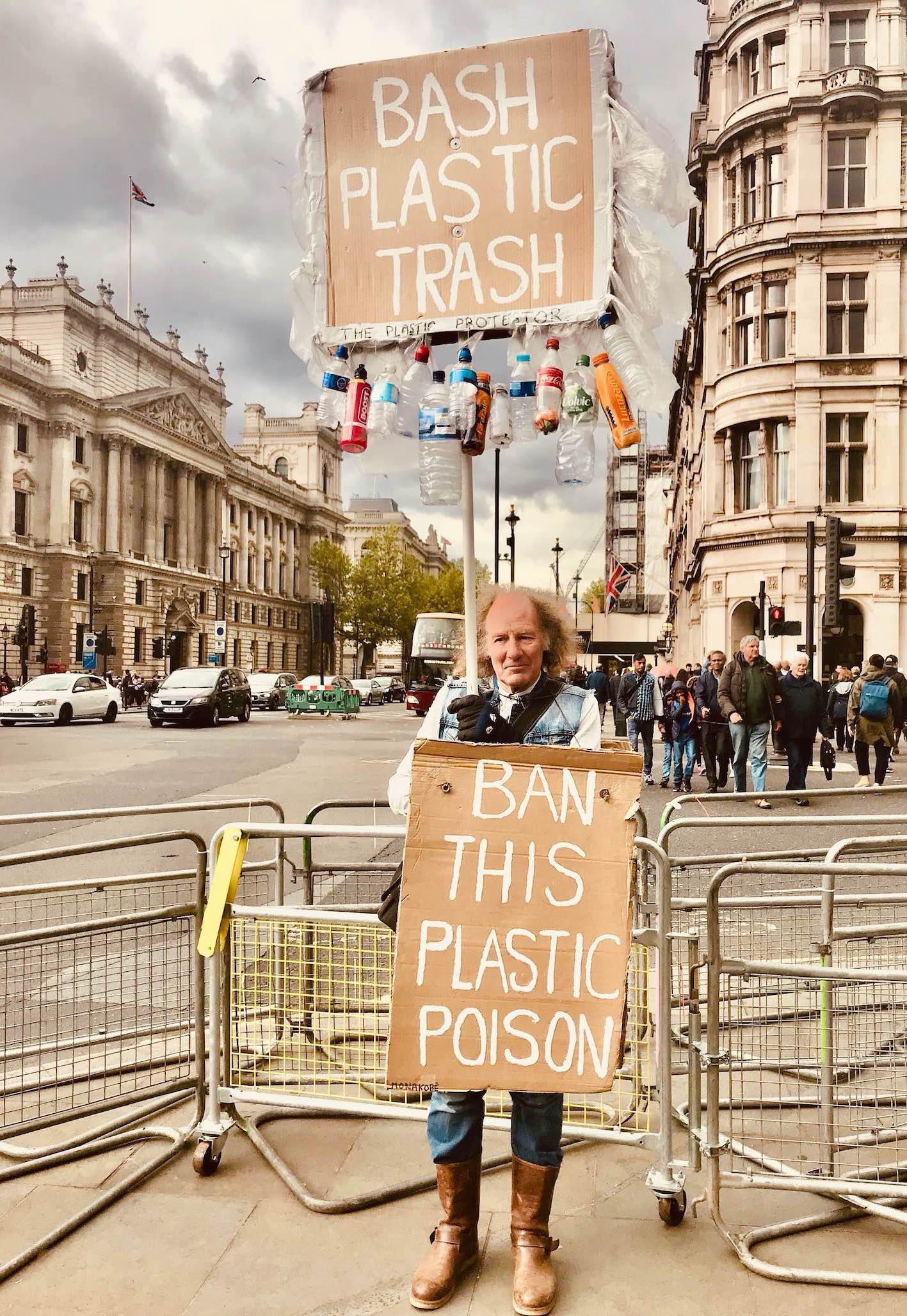 He doesn’t shout or try to draw in passersby. Instead, he simply makes himself available to anyone open to a frank, amiable chat about the terrible damage plastic continues to do to our planet. And, of course, of the dire need to take drastic action. For more info, check out Plastic Oceans UK.