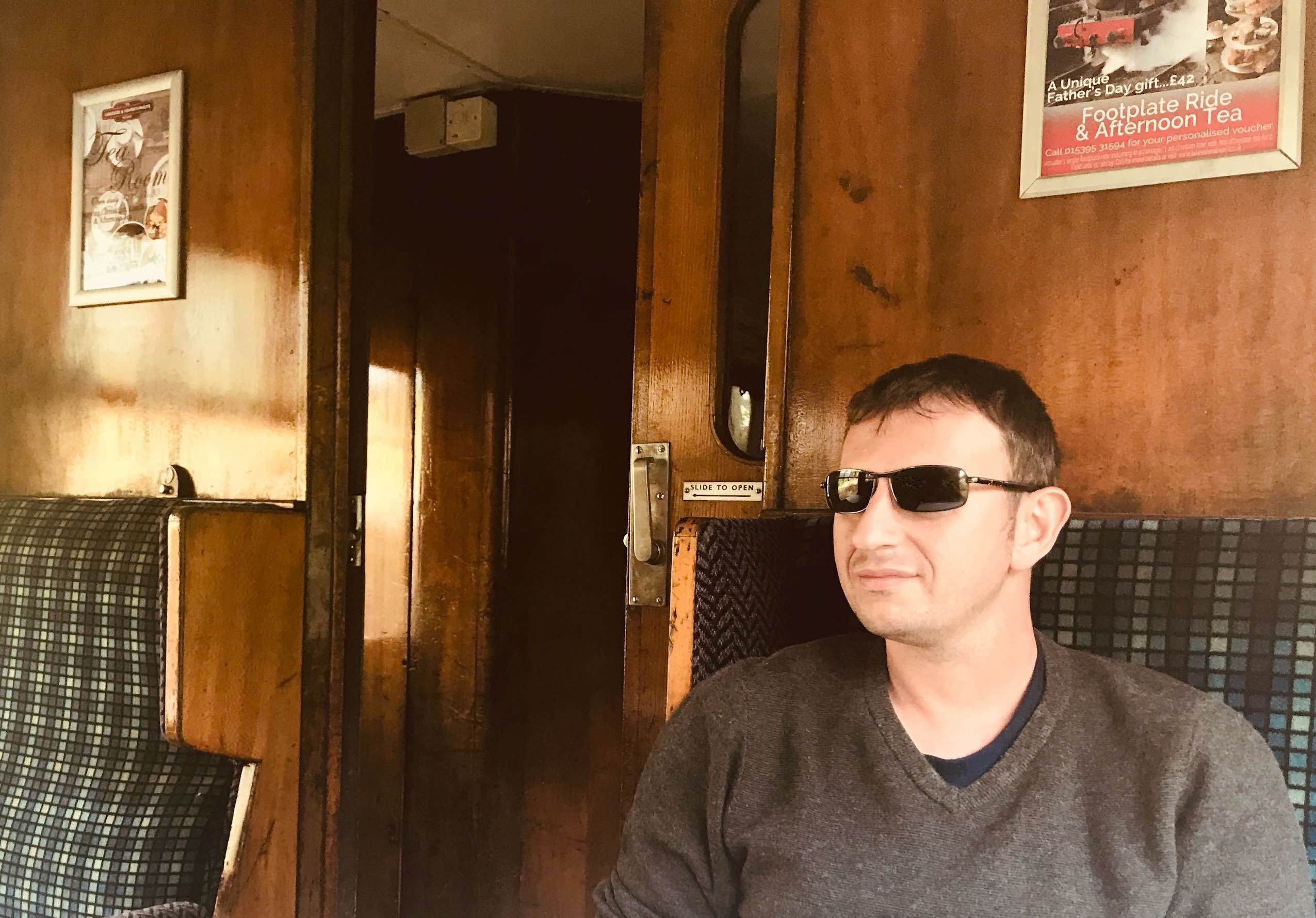 My action-packed stay in Lancashire visiting Uncle D was drawing to a close. Soon, I’d be on a train humming up to Scotland for the next leg of my UK adventures. However, I simply couldn’t leave the region without dipping into Cumbria for a day in The Lake District.

Time and time again I’d been told that The Lake District might just be the most beautiful part of England. Thus Uncle D and I set off from Carnforth in the car. Not that we were simply driving to Lake Windermere. Rather, D had decided we should make the approach in style. Just 33 minutes later we pulled up at Haverthwaite Railway Station, an historic train hub dating back to 1869. 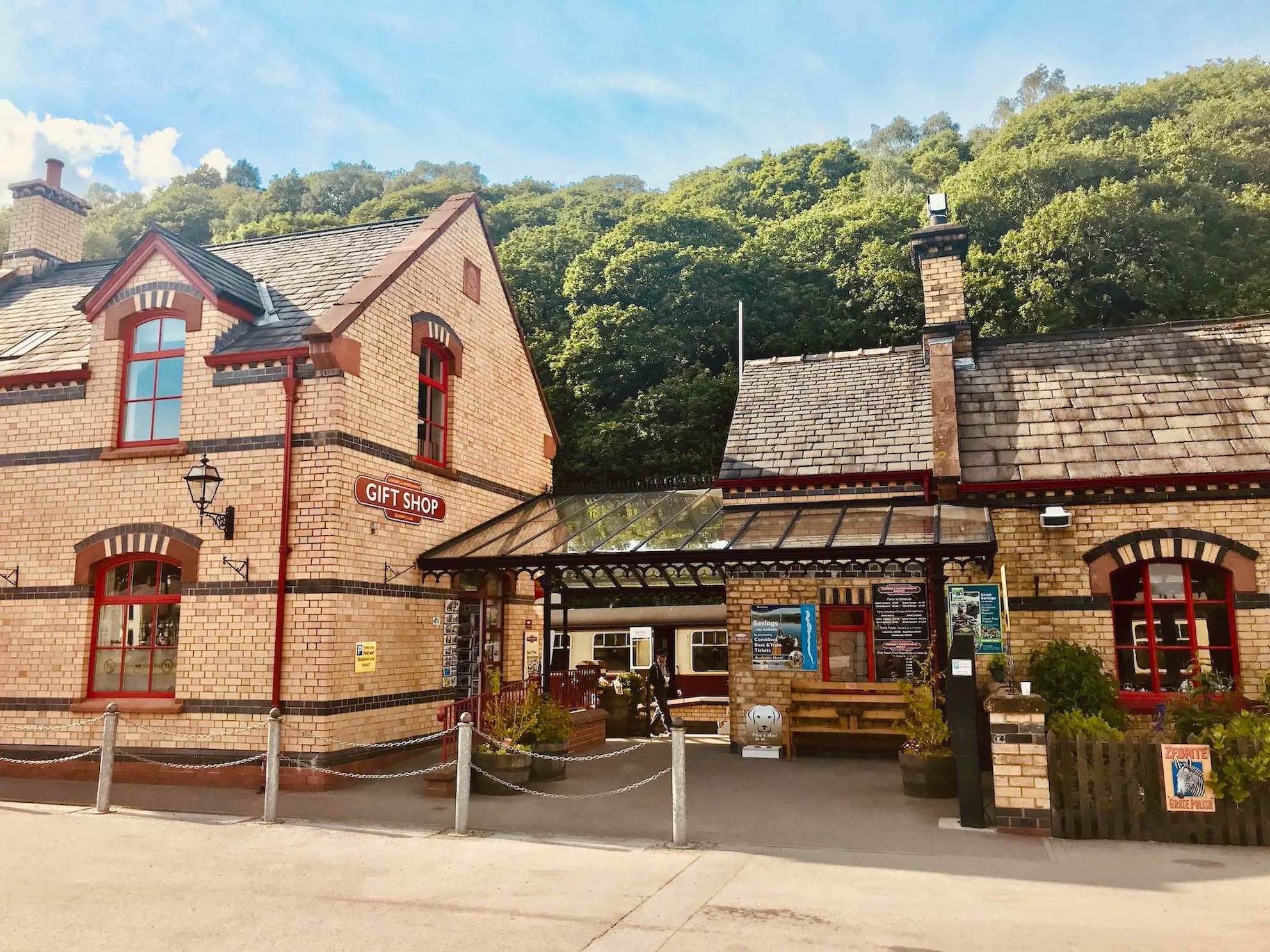 I love train travel, without doubt my favourite way of getting around. But as I was soon to find out, this certainly isn’t your average train experience. In fact, Haverthwaite Station sits on the preserved three-mile Lakeside and Haverthwaite Railway line. 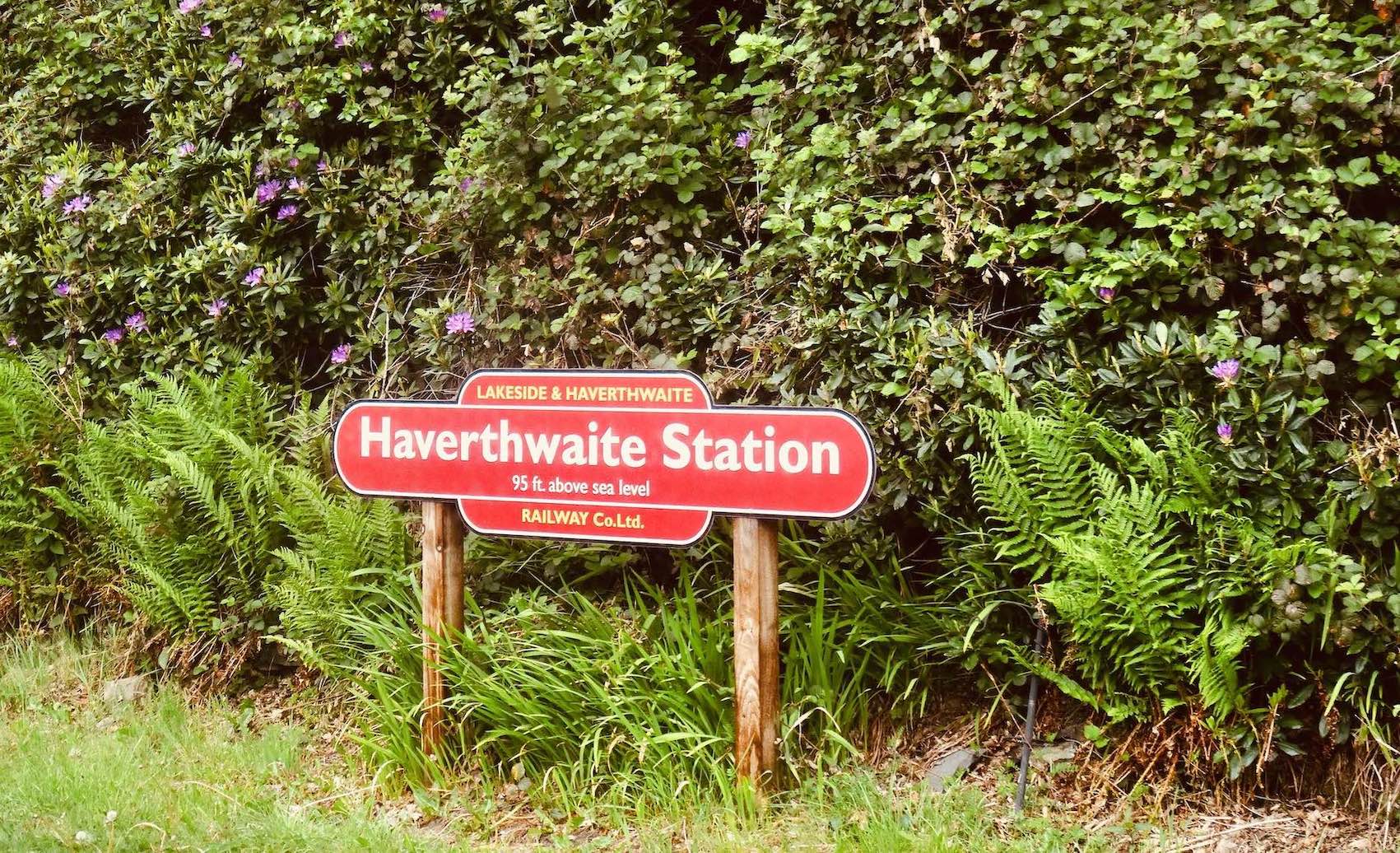 When the station first opened, its trains were chugging industrial freight around. There would be endless mounds of coal, for example. And plenty of iron ore, some sulphur and… brace yourself… gunpowder! 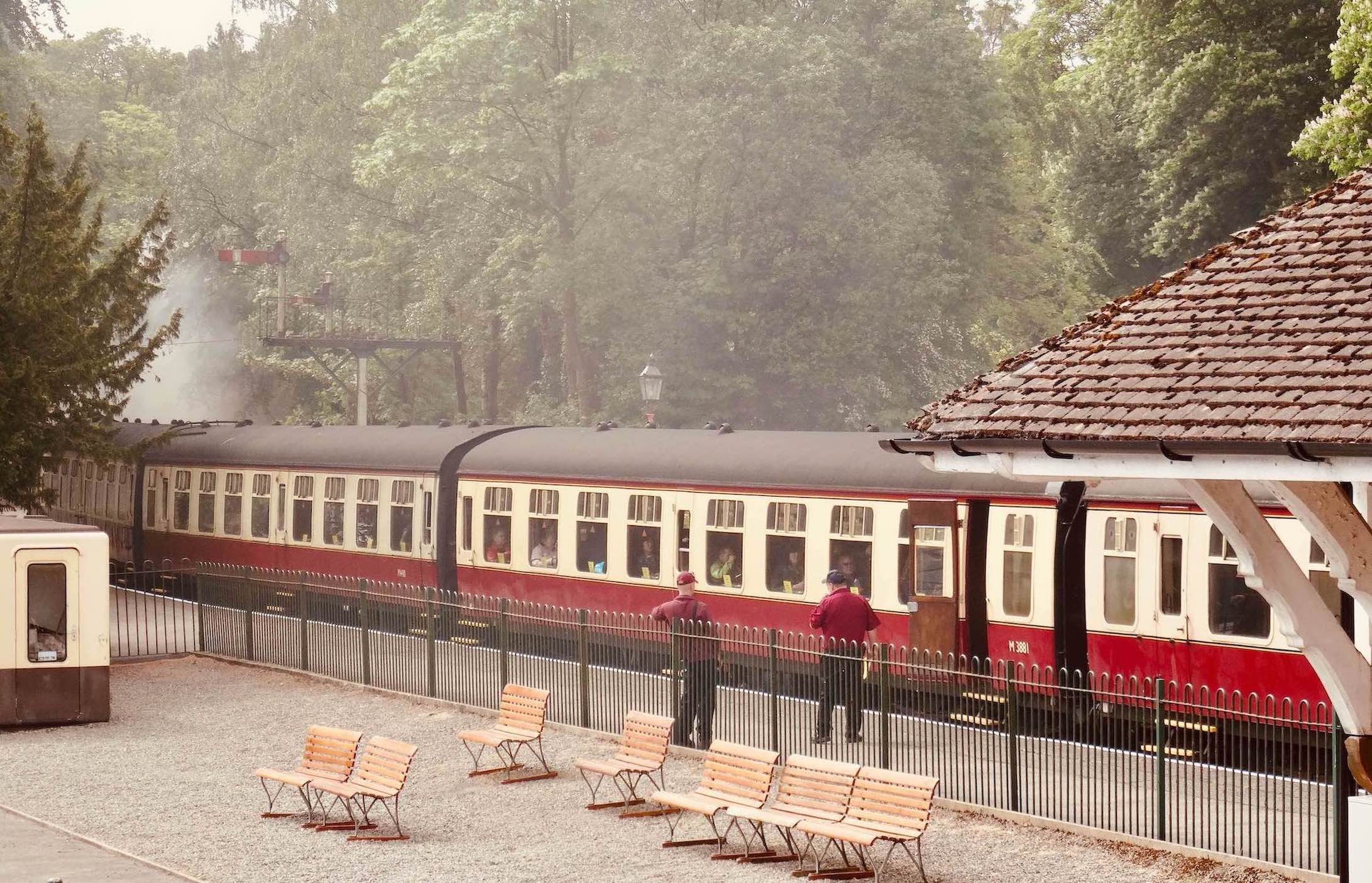 By the early 1870s rail authorities began offering holidaymakers a service to Lake Windermere. This became more and more popular and by the end of the century there was a veritable squadron of hardworking steam trains taking locals and tourists alike to and from the lake.

Regular operations were suspended during World War II. Moreover, the army took over the line in order to transport captured German prisoners to a nearby camp at Grizedale Hall. Things did get back to normal in 1946, after the war had finished. But by 1967 the station had closed permanently, along with the entire line. Just one of hundreds of closures across the UK in the late 60s. 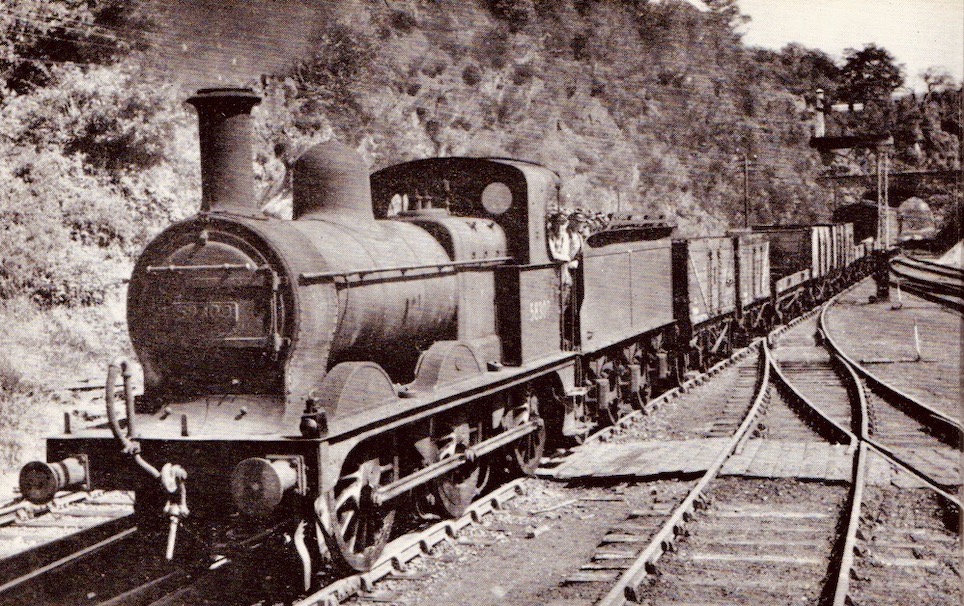 The Lakeside and Haverthwaite Railway Line, 1954.

Happily, there were too many people who loved the station for it to just disappear. In 1973  a group of local railway fanatics and history buffs succeeded in reviving the line as a tourist attraction. Hooray!

Fittingly, you can’t buy tickets for today’s steam train journeys online. Instead, you have to check in at the counter at the station itself. This is where D and I picked up our combo tickets. This included our return train journeys from Haverthwaite to Lakeside. And our boat rides from Lakeside to the town of Bowness-on-Windermere and back. 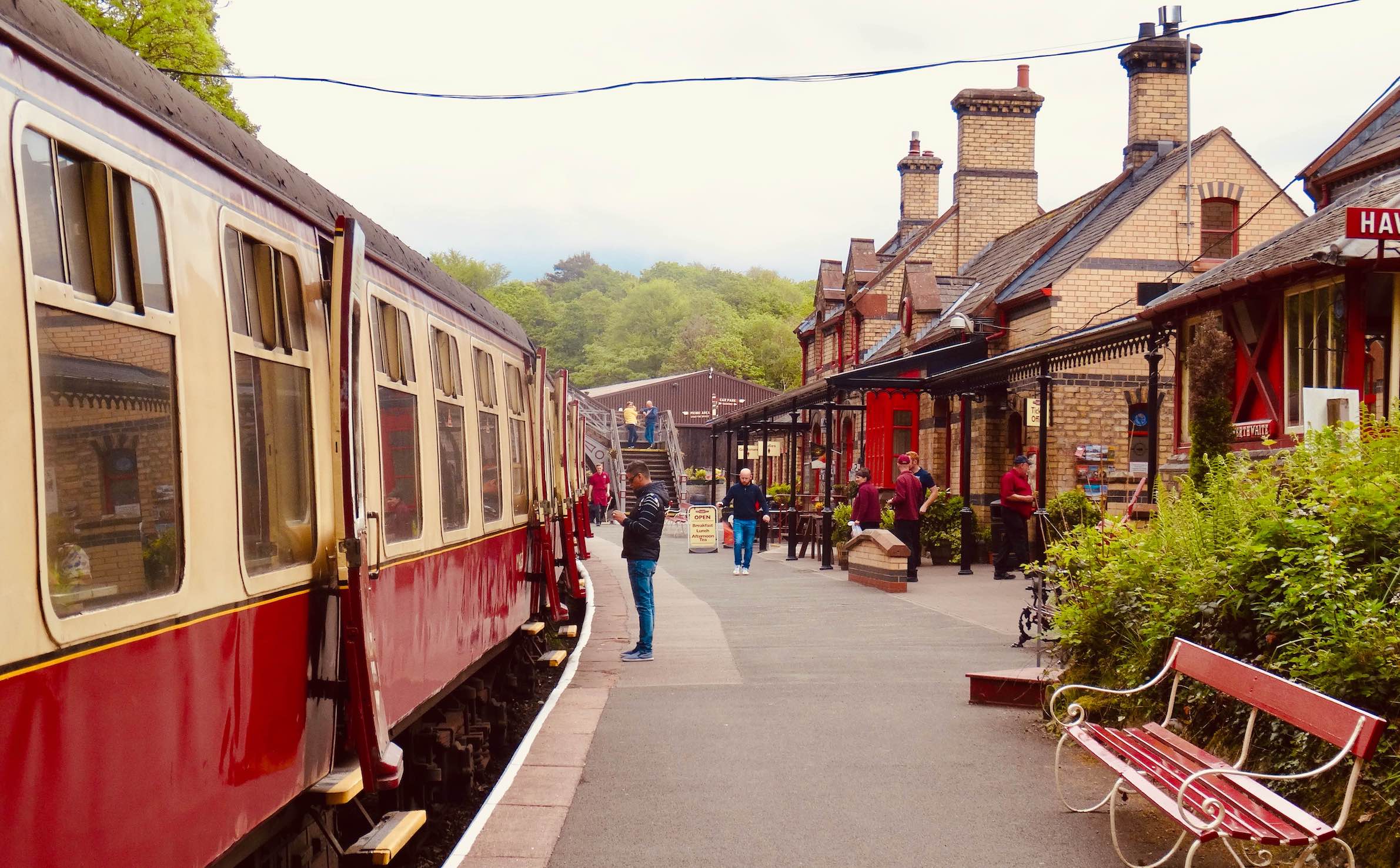 With our tickets secured, we made our way onto the platform where a quintessentially retro English scene awaited. Truly, it was like stepping back in time, bringing to mind the classic British book and TV series Thomas The Tank Engine.

Later, I read that Haverthwaite Station actually appeared in one of Christopher Awdry’s books, Thomas & Victoria. What’s more, you can see the station and train line featured in the music video Never Went to Church by the English rap-pop band The Streets. 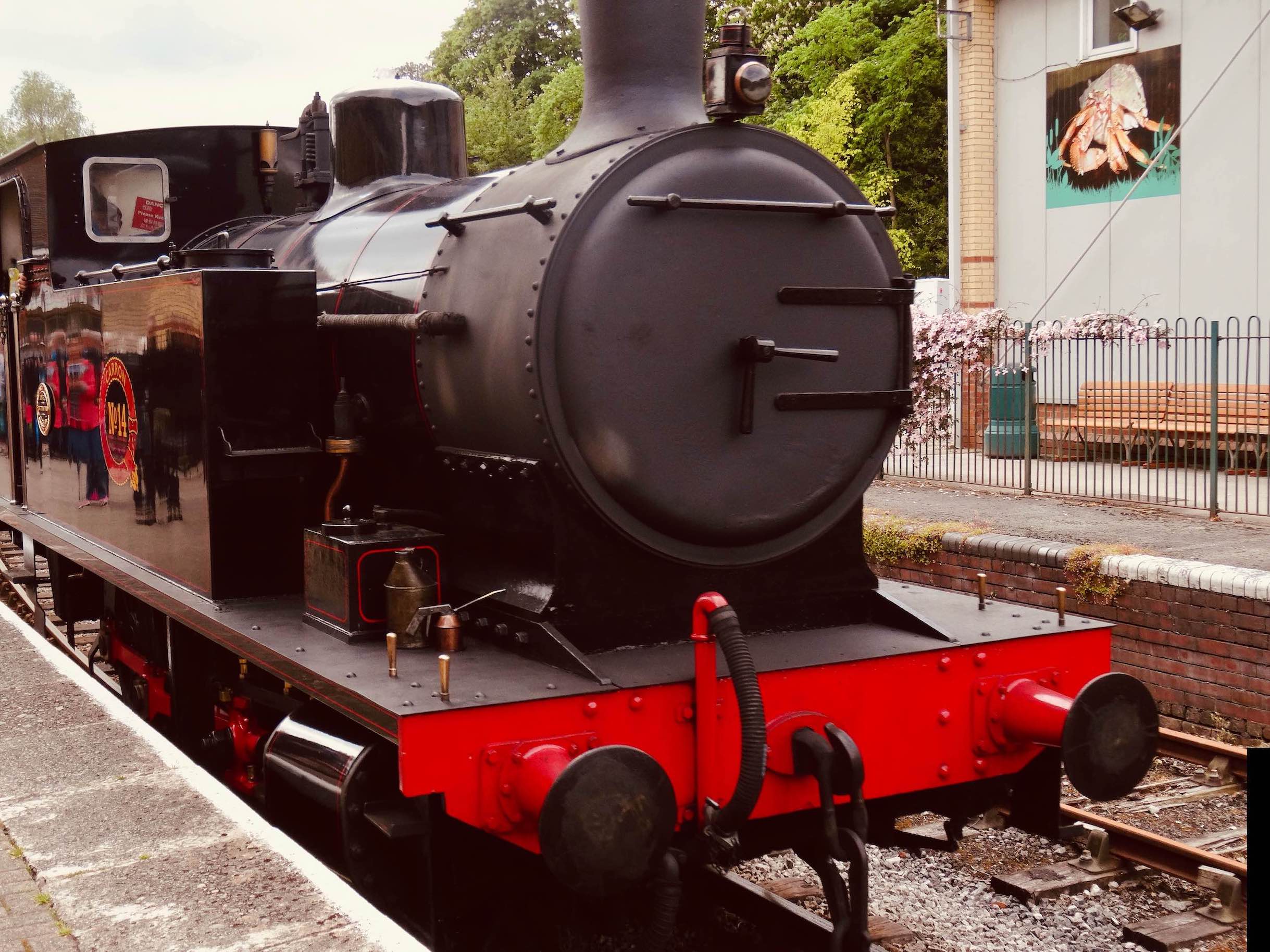 No wonder there was such a feel good factor that day. People scurried onboard with their packed lunches. Some headed into the onsite gift shop and cafe. Others photographed the beautiful black and red steam train we were about to ride. it was built in 1911, according to a sign on one of the carriages, by the Scottish engineering company Andrew Barclay Sons & Co. 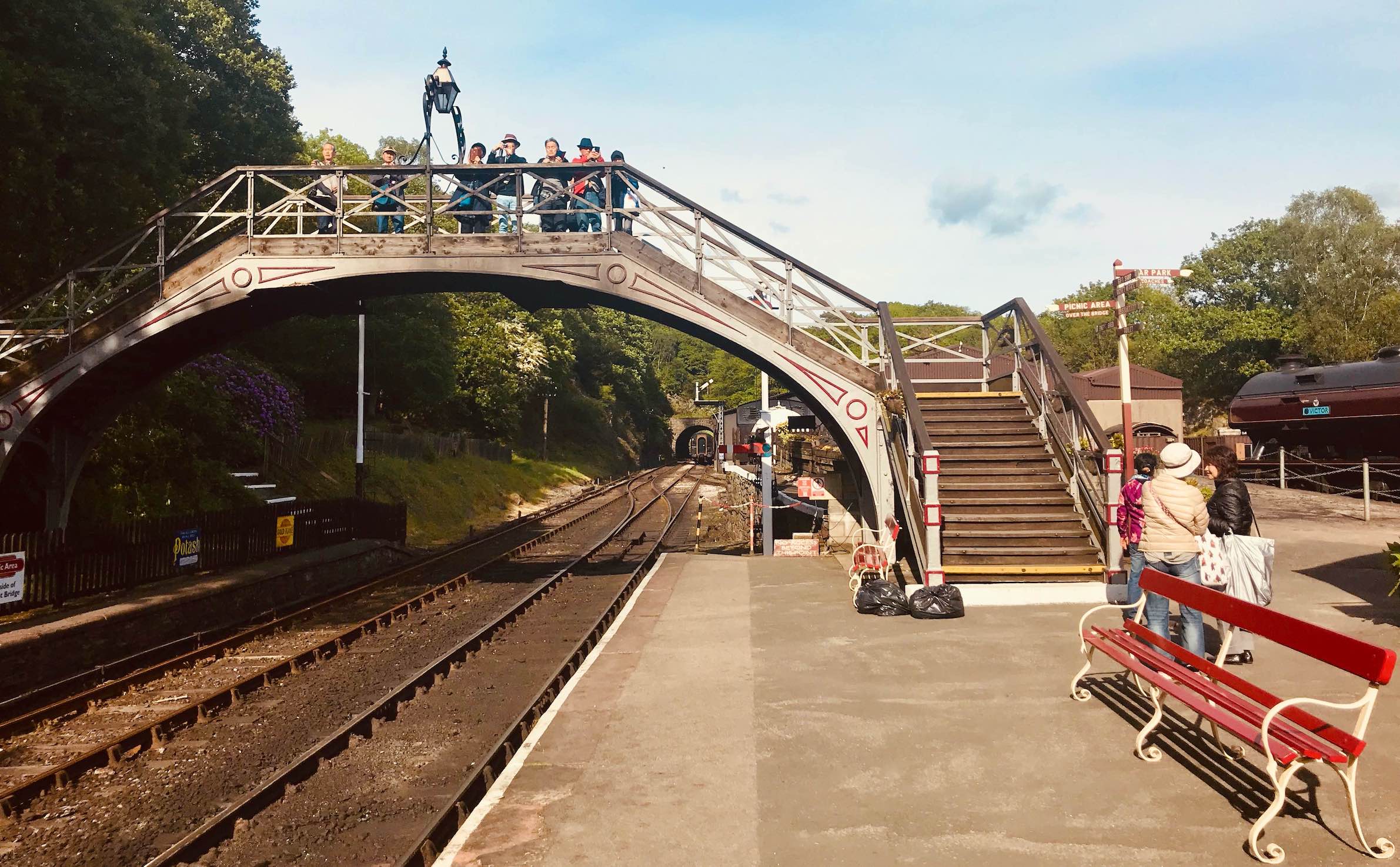 At the end of the platform, meanwhile, there’s a charming footbridge overseeing the lines. Which is of course where so many people swarmed to when a locomotive came chugging through. Keen to grab a video, I scaled the bridge myself and lined up my camera. Then hit record just in time to see it pass by, enveloping everyone on the bridge in a cloud of smoke.

Finally, it was time to take our seats in one of our train’s beautifully preserved carriages. With comfy chairs, dark wood furnishings and spacious overhead luggage racks, they’ve done a great job of channeling the vibe of yesteryear. And then we were rumbling on our merry way, the driver welcoming us on the tannoy and providing historic info as we went. 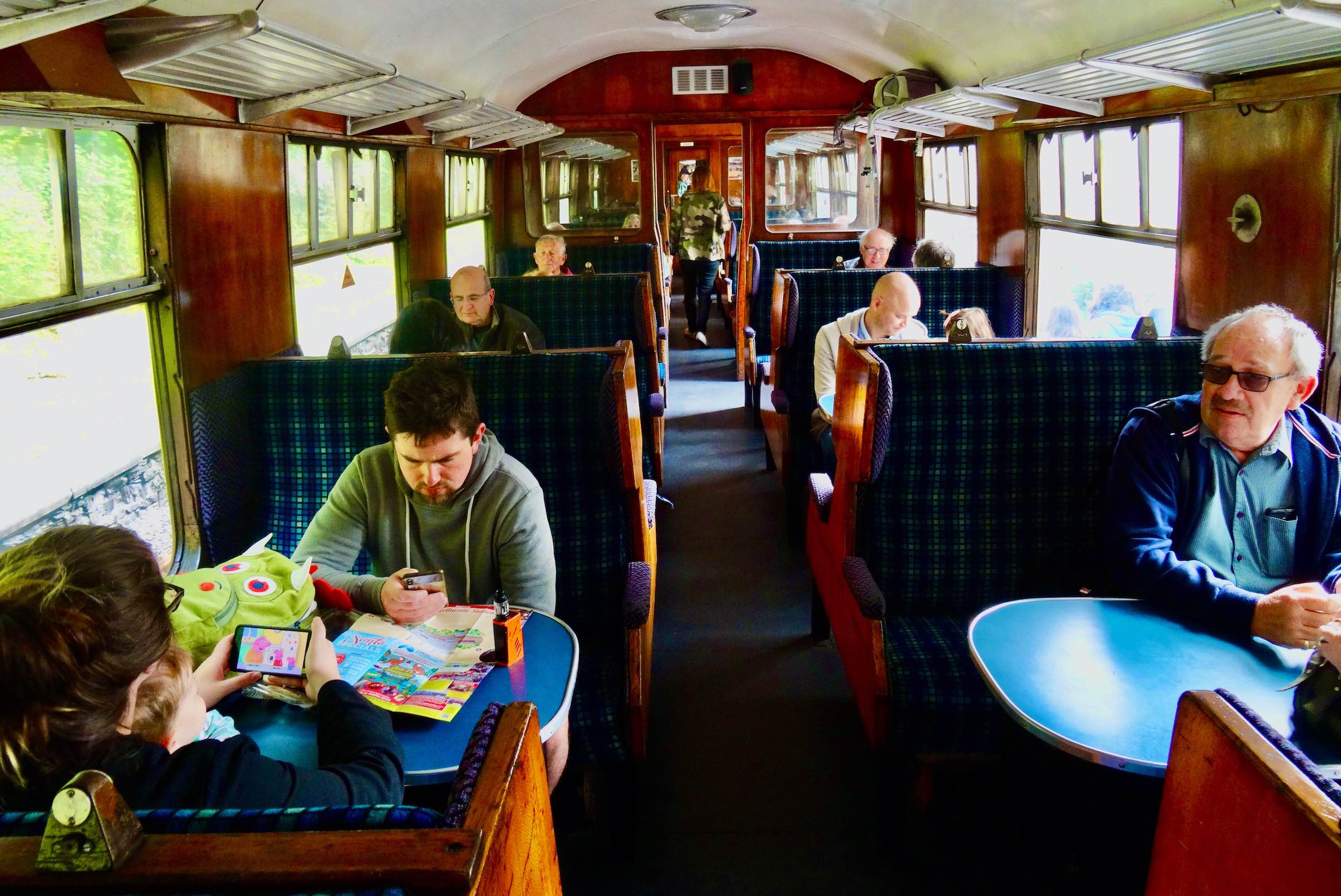 Onboard the train at Haverthwaite Station.

The entire line covers just 3.2 miles (5.1km), an 18-minute journey that makes a short stop at Newby Bridge before terminating at Lakeside. Call me wistful, but there is something soulful about train travel. Especially when you can hear the wheels rolling on the tracks and the Choo Choo! of the cylinders letting off steam. Despite being such a short trip, I just had to grab a quick video of our progress through the Cumbrian countryside.

My only criticism is that I wish the journey had lasted longer. Nevertheless, there was little time to dwell on it, because we had just twelve minutes at Lakeside before our boat set off through the glittering waters of Lake Windermere. “All aboard!” 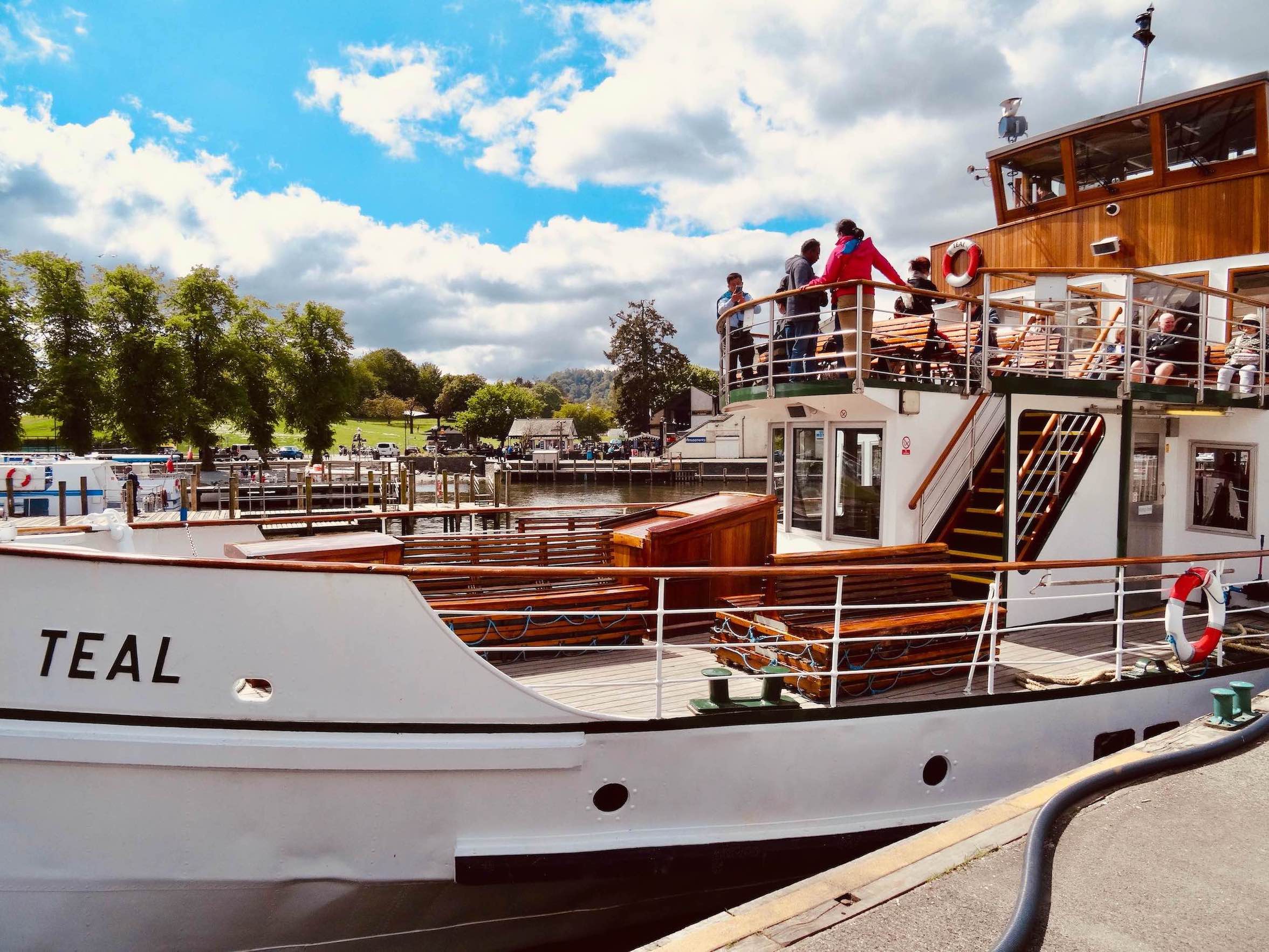 Boarding for our Lake Windermere cruise.

Our vessel that afternoon was MV Teal, a bulky 3-deck beast built in 1936 by Vickers of Barrow. Apparently, it can hold up to 533 passengers, though I’d say it was maybe just over half full. 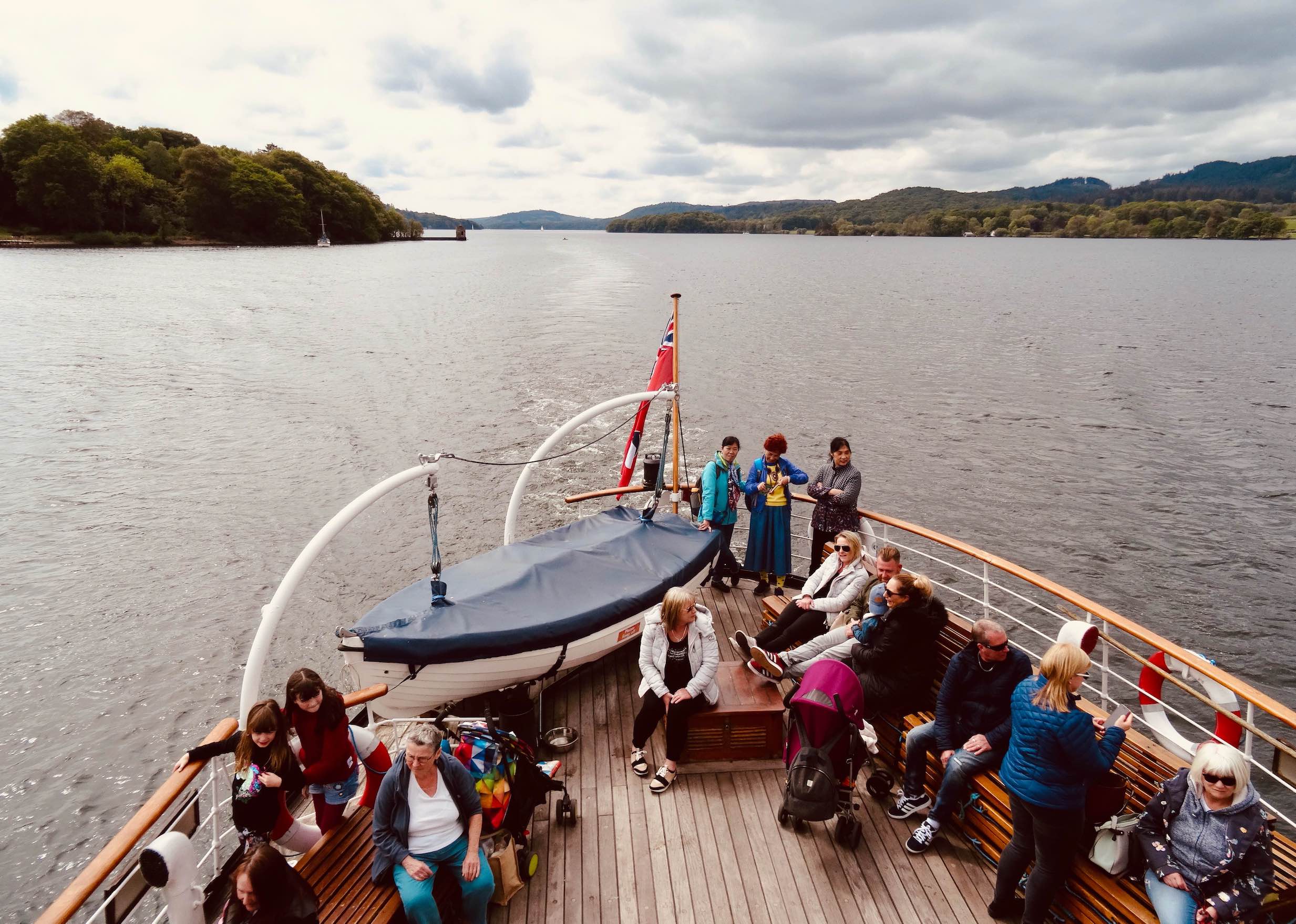 It didn’t take long for me to see why Lake Windermere holds such a romantic place in the English psyche. It is undeniably beautiful, even on that May afternoon when the sky flitted between light blue and grey. The indecisive sun flirting with us as it ducked in and out of the clouds. 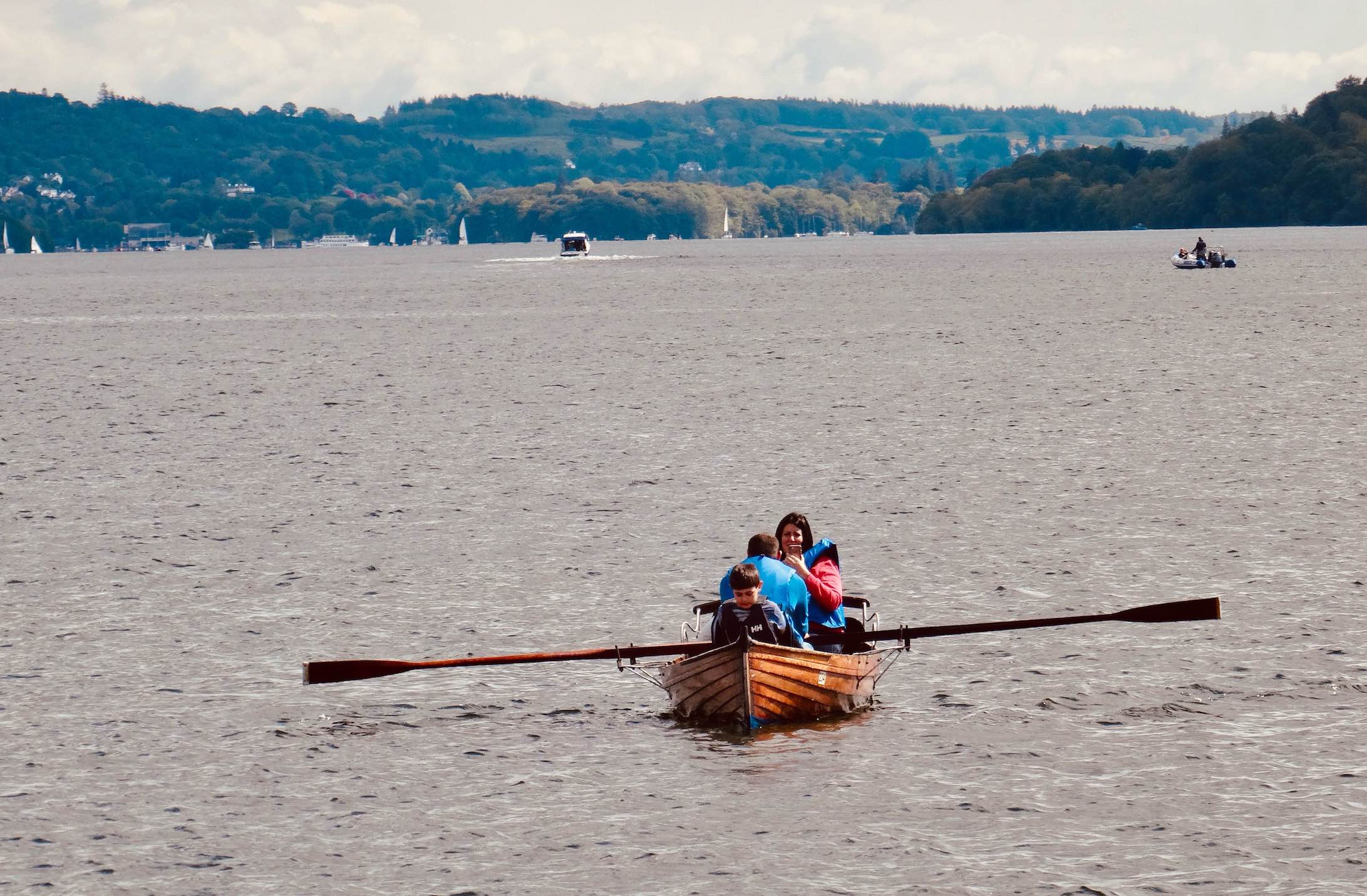 Yes indeed, this is Britain’s largest natural lake, an 11-mile ribbon that forms part of the border between the counties of Lancashire and Westmorland. It holds a magical place in our history and culture, particularly within the arts. And what better place to start than with the poet William Wordsworth, who was born locally just up the road in the Cumbrian town of Cockermouth. 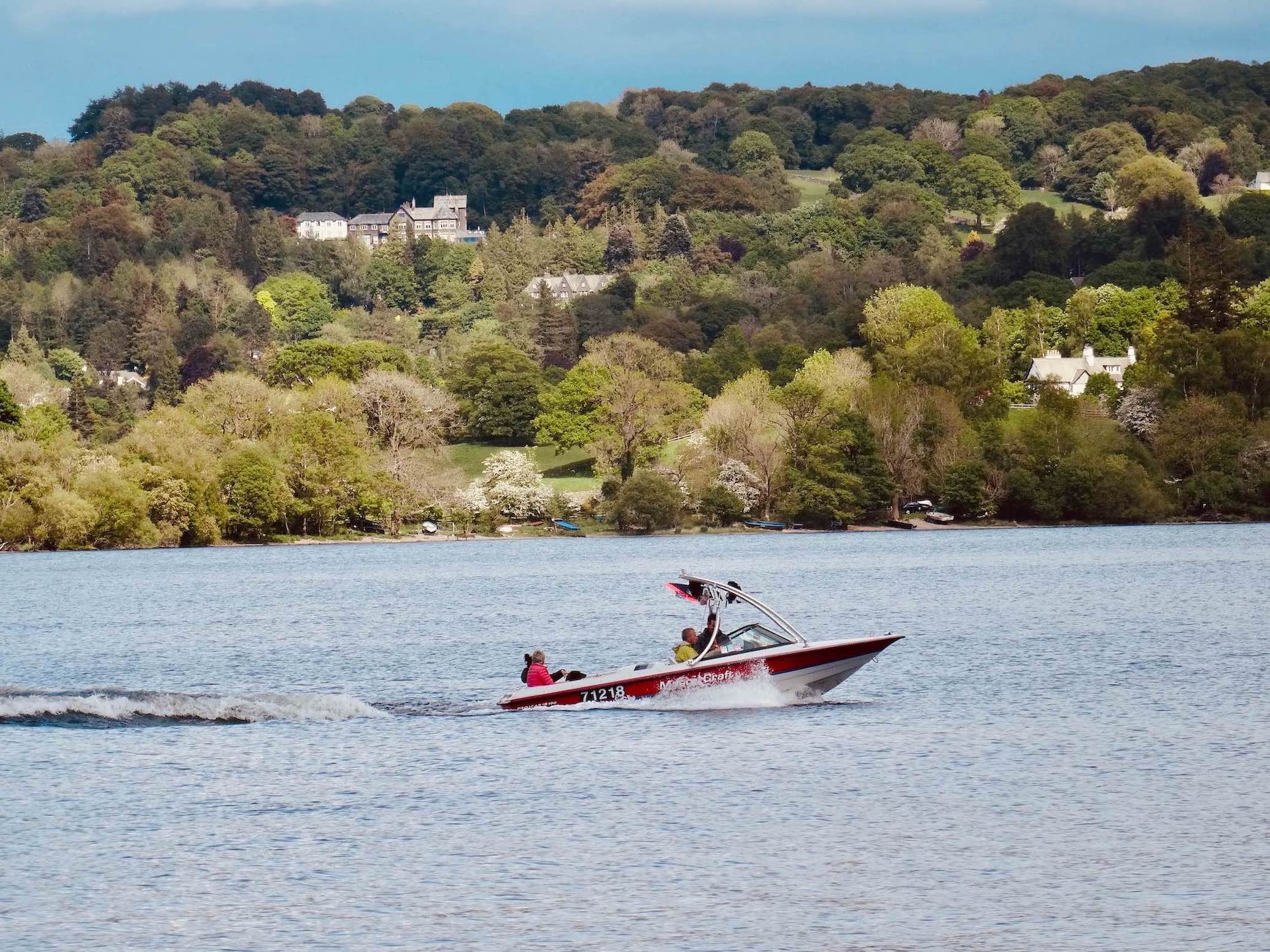 Wordsworth fell in love with Windermere and The Lake District as a young boy. In 1779, as an up-and-coming poet, he decided to come and live here. First in the village of Grasmere, later in the community of Rydal. 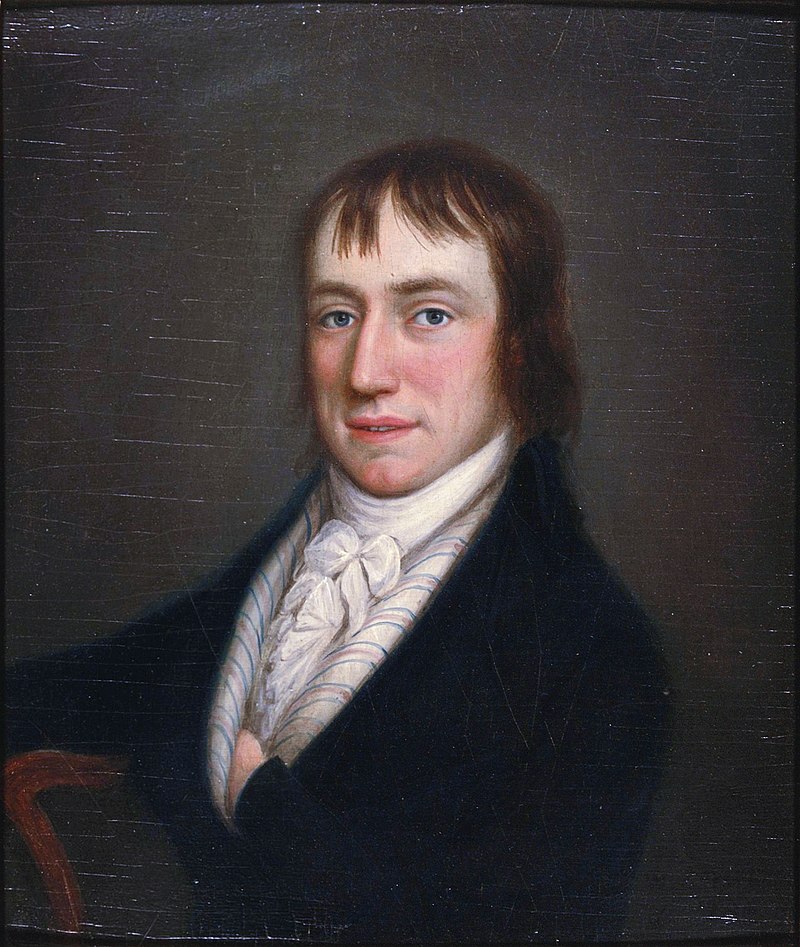 With the lakes and their surrounding countryside as his inspiration, Wordsworth’s writing blossomed. Eventually, in 1798, he made a major breakthrough with Lyrical Ballads, a collection of poems co-written with Samuel Taylor Coleridge. This kicked off English literature’s celebrated Romantic Age, while Wordsworth and Colerdidge, along with numerous other bards, became known as The Lake Poets.

I wandered lonely as a cloud

That floats on high o’er vales and hills,

When all at once I saw a crowd,

A host, of golden daffodils;

Beside the lake, beneath the trees,

Fluttering and dancing in the breeze. 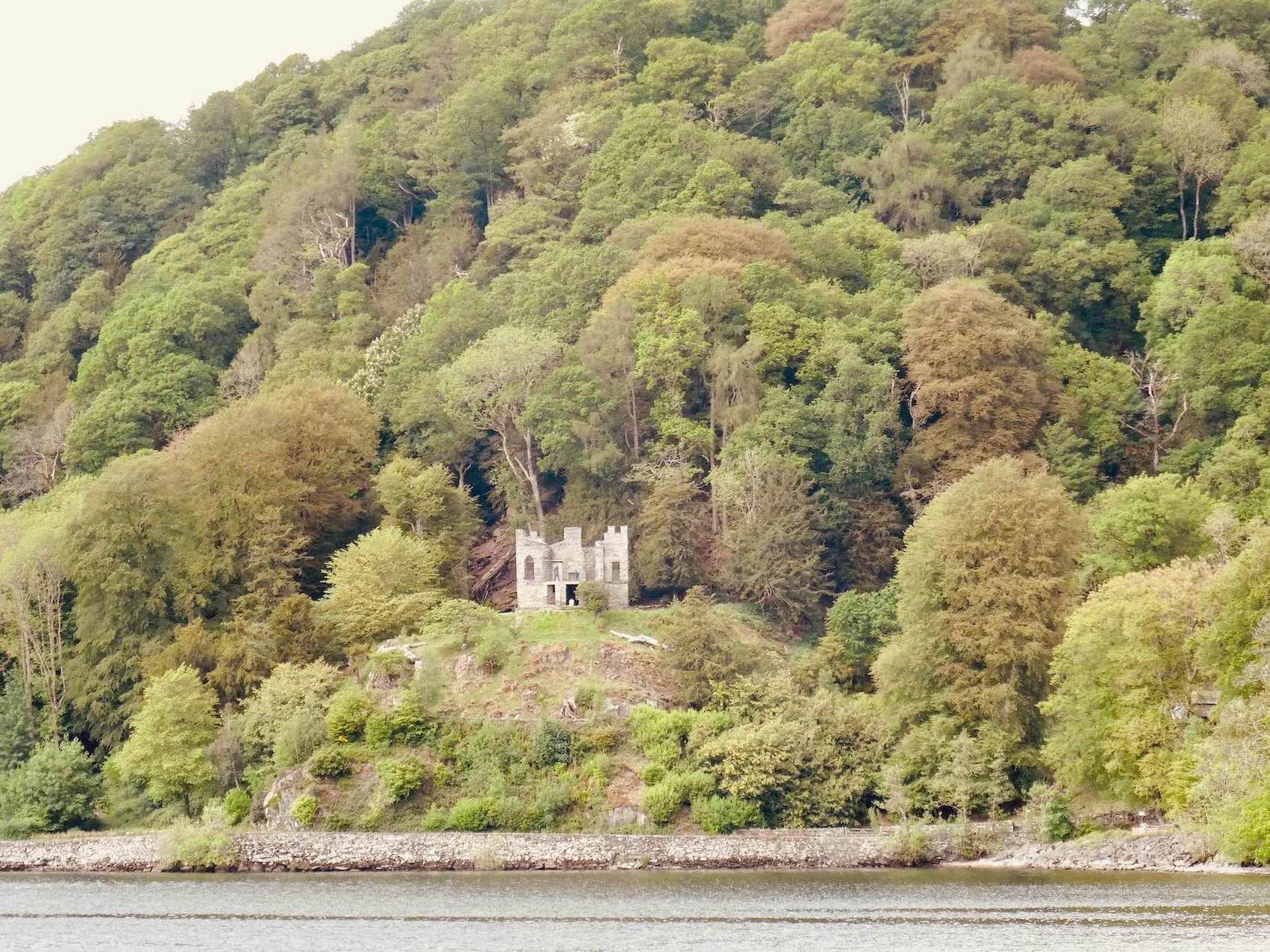 The author and journalist Arthur Ransome also took inspiration from Windermere for the fictional lake in his 1930 children’s adventure novel Swallows and Amazons.

Ransome, who was educated in the town of Windermere, was fascinated by the lake’s nineteen islands. Hence he made sure to include plenty of island action in his book, such as when the children investigate Cormorant Island to look for Turner’s missing trunk. 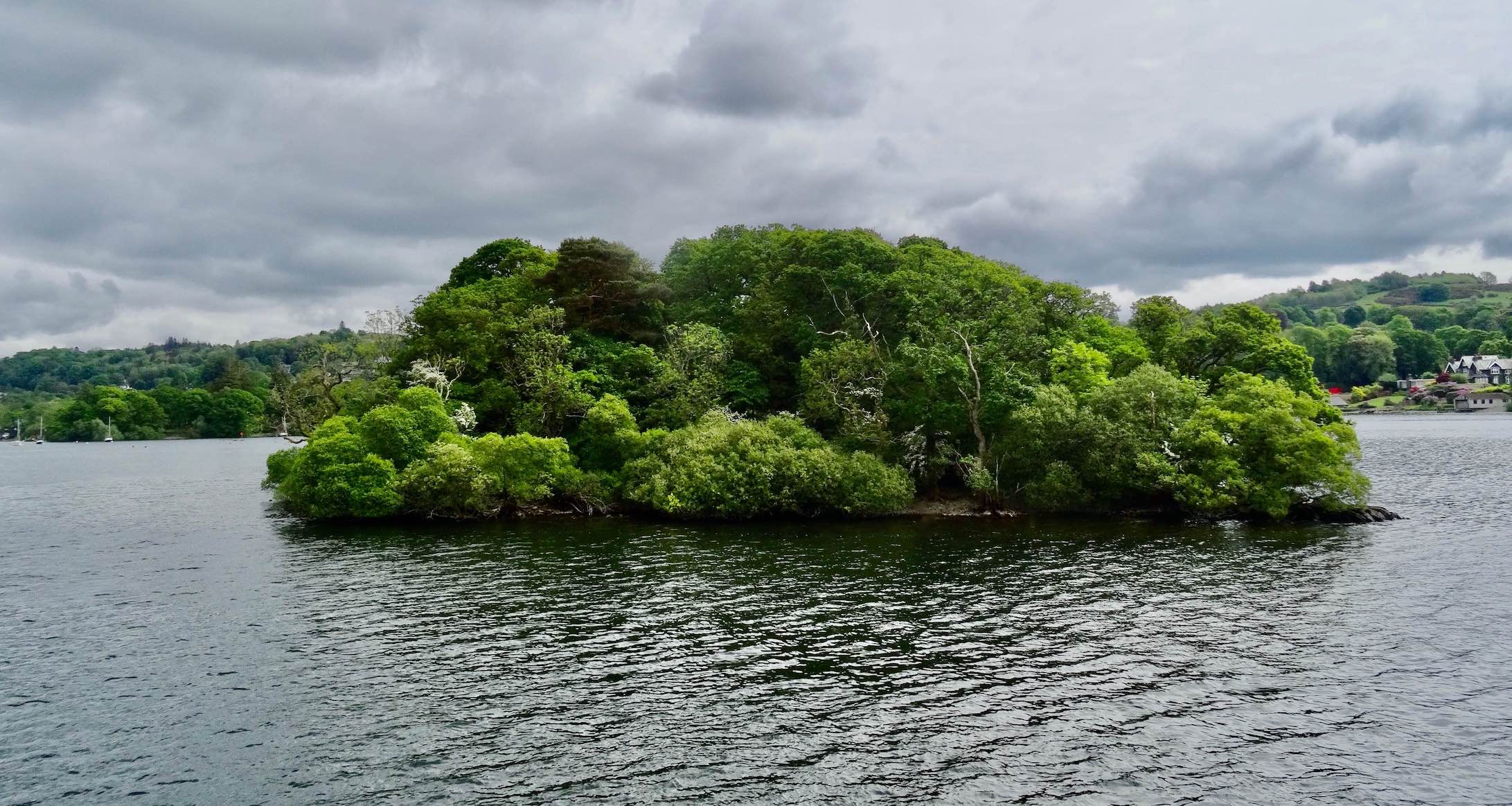 Furthermore, Windermere’s beauty has attracted plenty of filmmakers. In 1980 director Karel Reisz came here with Meryl Streep and Jeremy Irons to shoot scenes for the romantic drama The French Lieutenant’s Woman. The lake also appears in the black comedy Withnail and I (1986) and the 2020 World War II drama The Windermere Children. 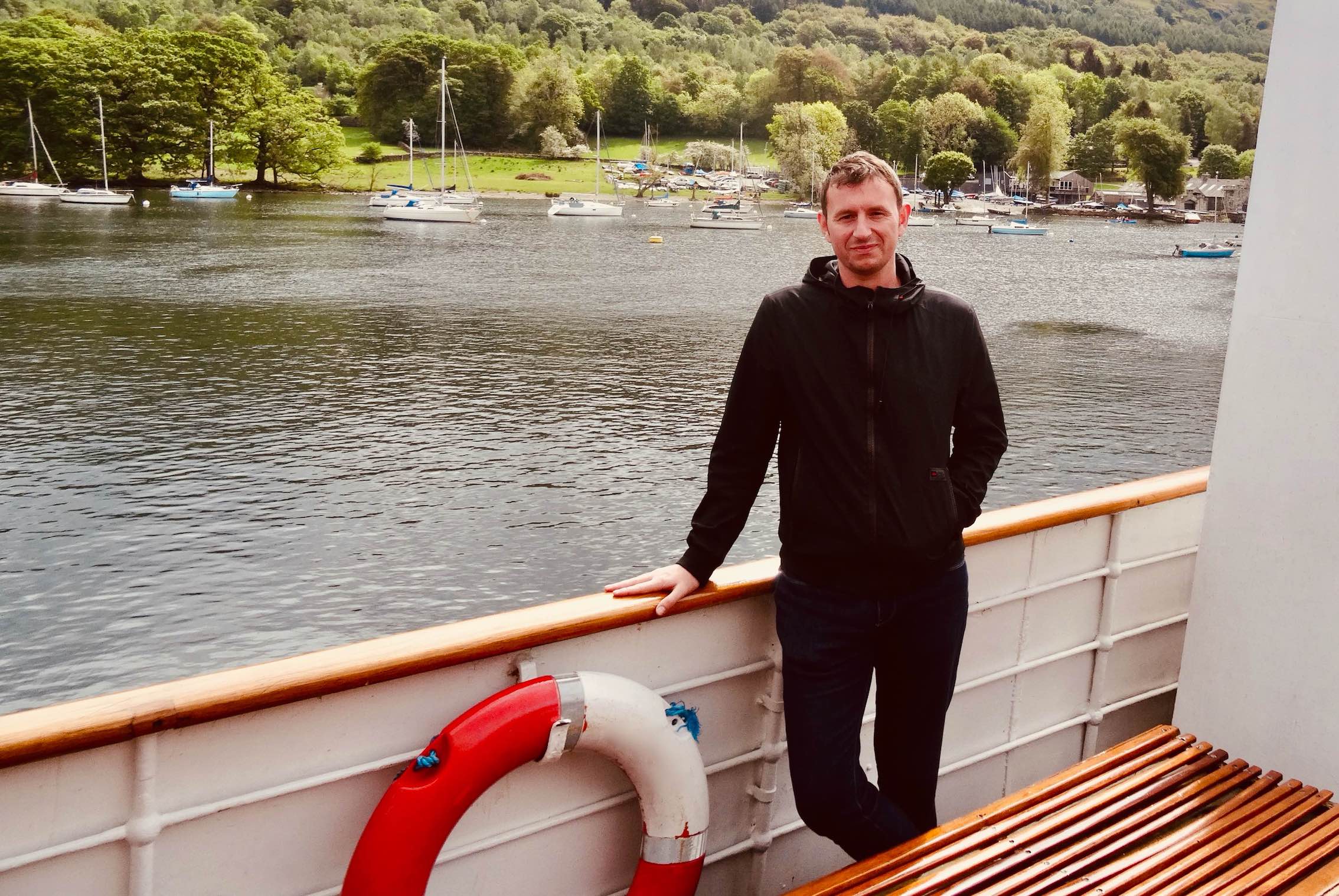 Eventually, the distant form of Bowness came into view. A short while later we passed another of Windermere’s heritage vessels, the mighty MV Swan. Also built by Vickers of Barrow, it is a couple of years younger than MV Teal having been finished in 1938. 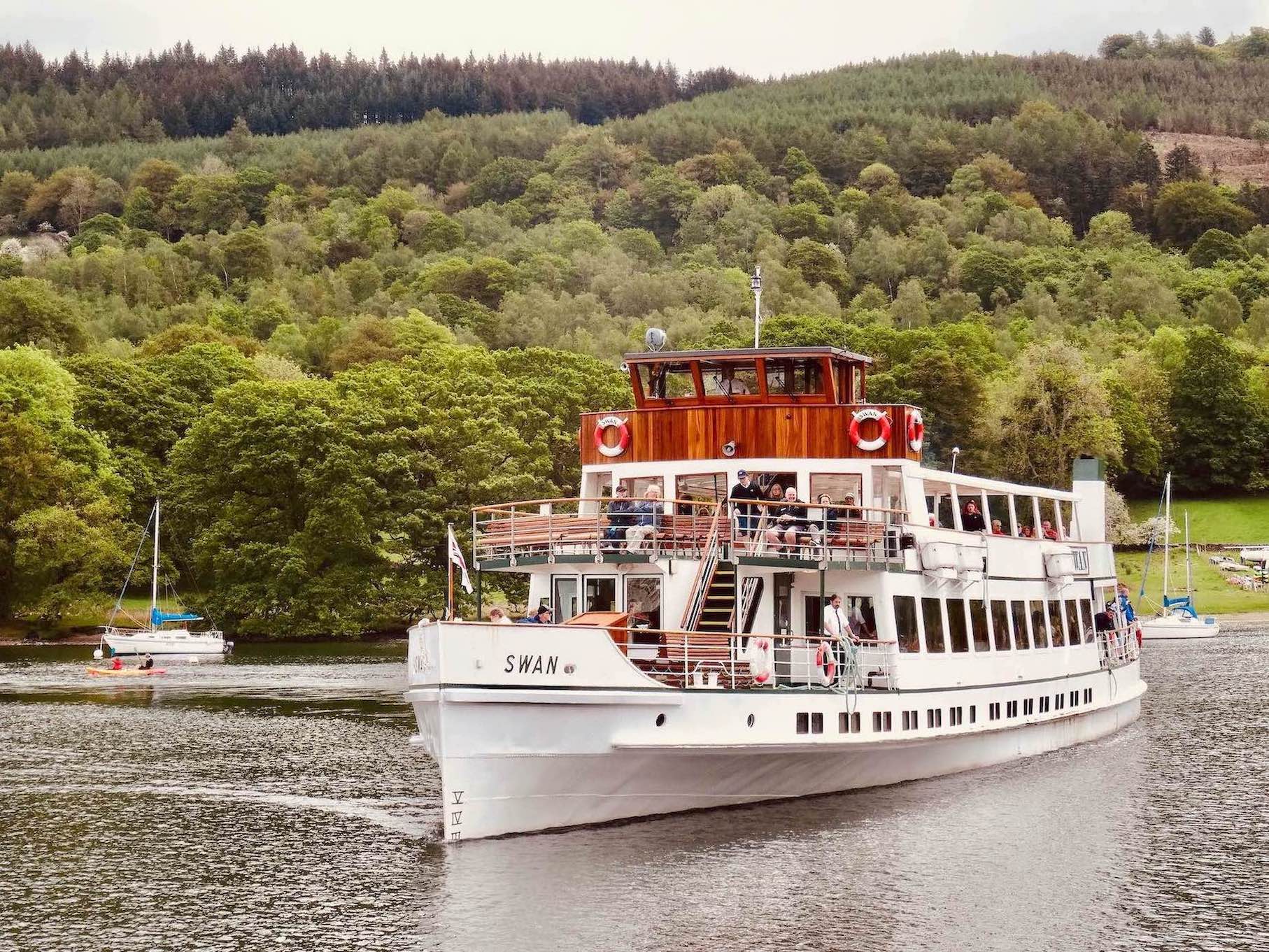 Edging towards our docking point at Bowness and what a view we had. Those rolling green hills looked like a painting, a collection of handsome white houses and yachts nestled beneath. How the other half live… 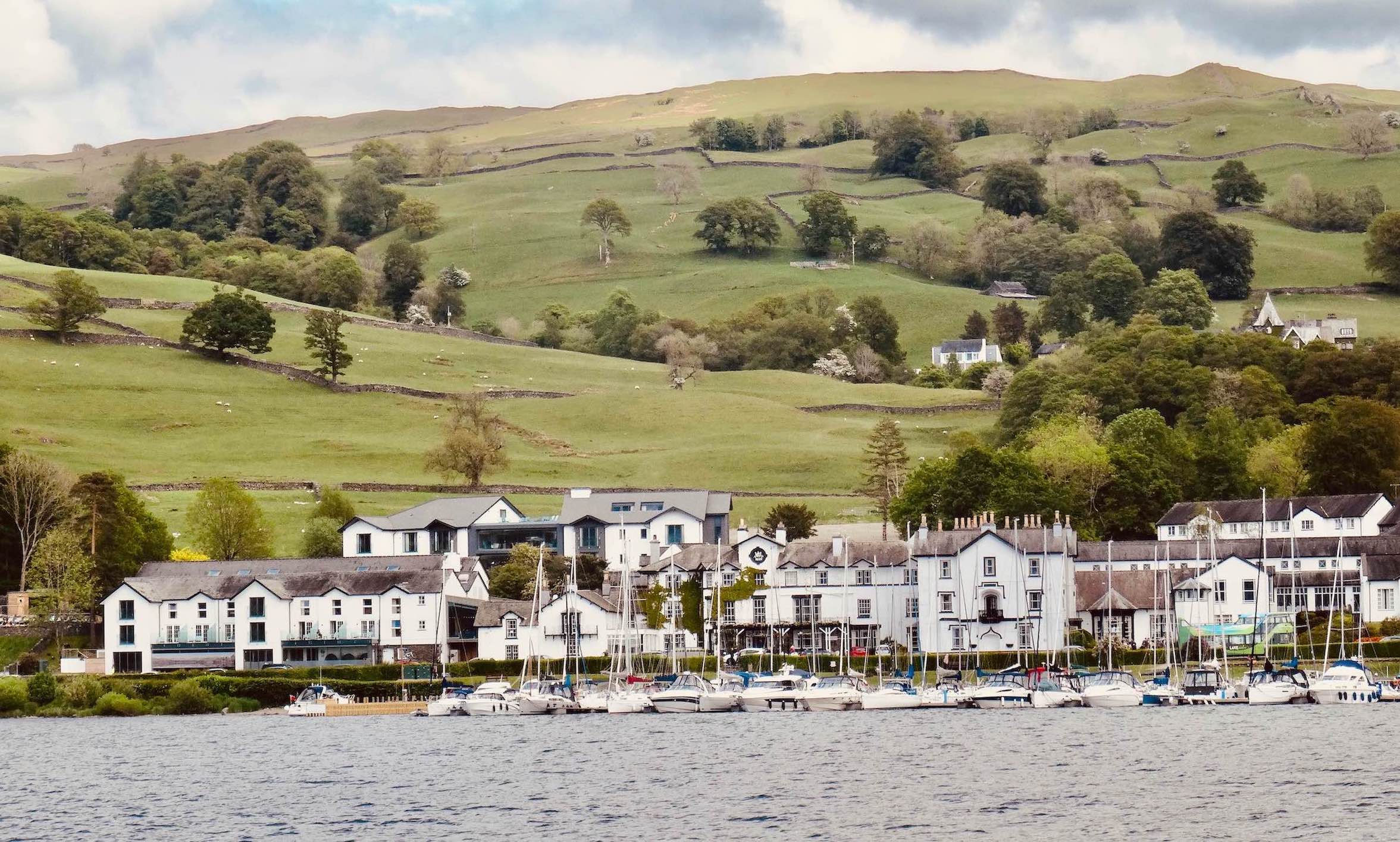 “Ladies and gentlemen we are coming into Bowness” announced our Captain as I shook myself from my daydreaming. Before us, coming into sharper view with every second, was the magnificent Belsfield Hotel.

This 4 star home from home dates back to 1845 when it was built as the private house of Catherine Harrison, the Baroness Von Sternberg. If I ever come back to Windermere, methinks Sladja would love a couple of nights in The Belsfield. 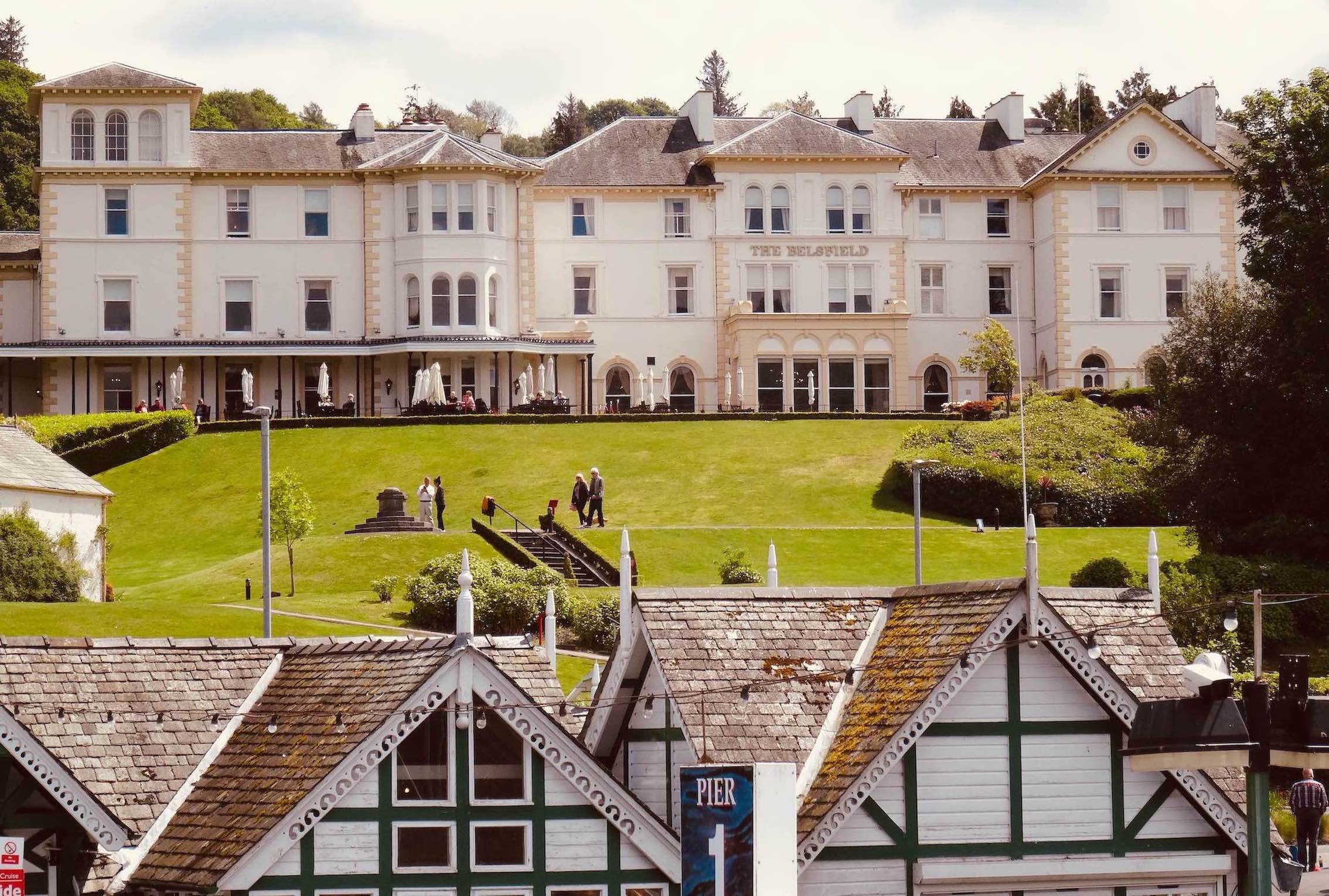 The weather had really brightened up as we disembarked MV Teal. I could already see what a pretty town Bowness was and we hadn’t even investigated yet. Next, I’d be checking out an attraction connected to another iconic English writer whose story is so intertwined with The Lake District. So off I went to learn more about… drum roll… The World of Beatrix Potter. 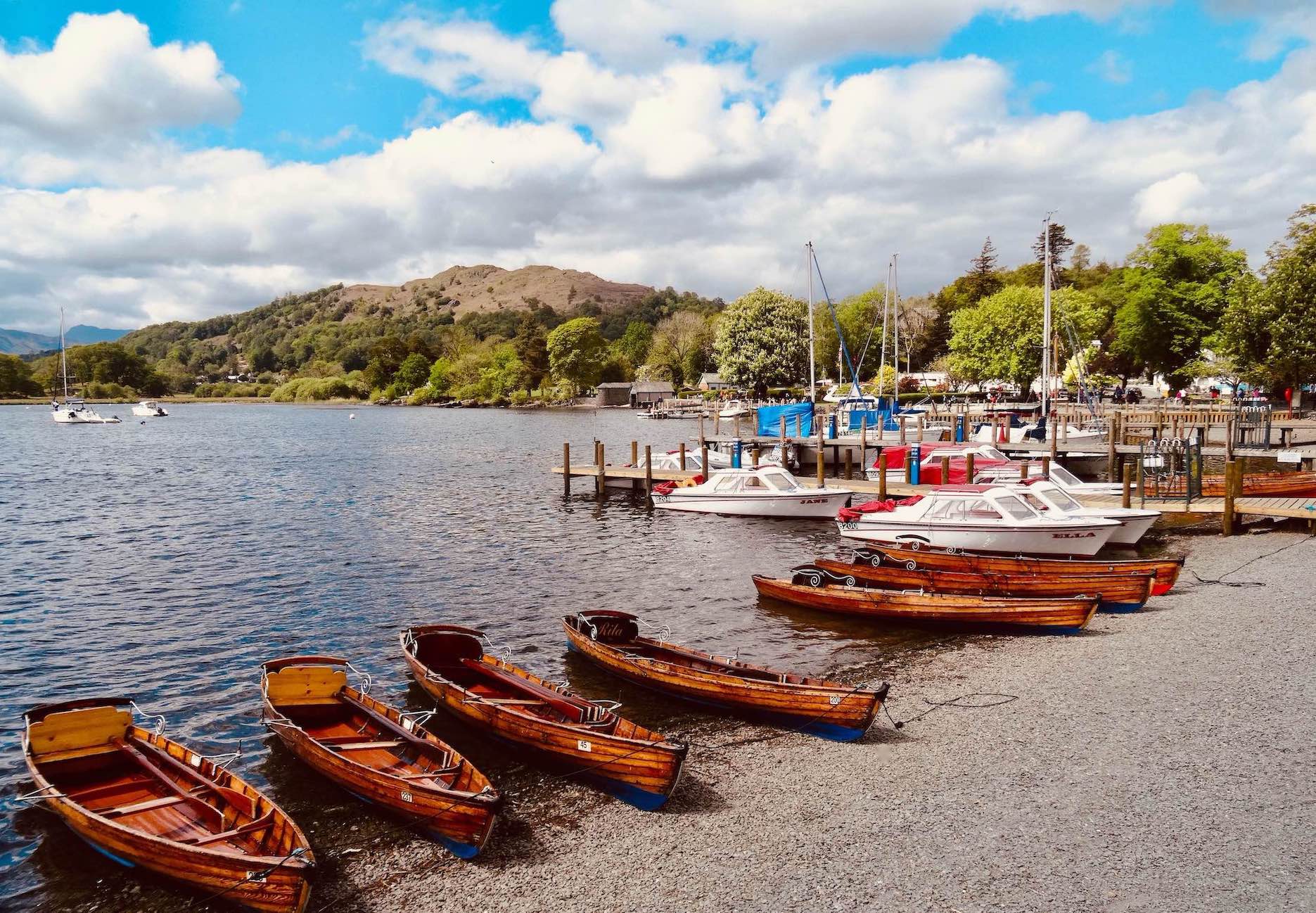 Like this? Maybe take a look at my many travel articles from all around England.