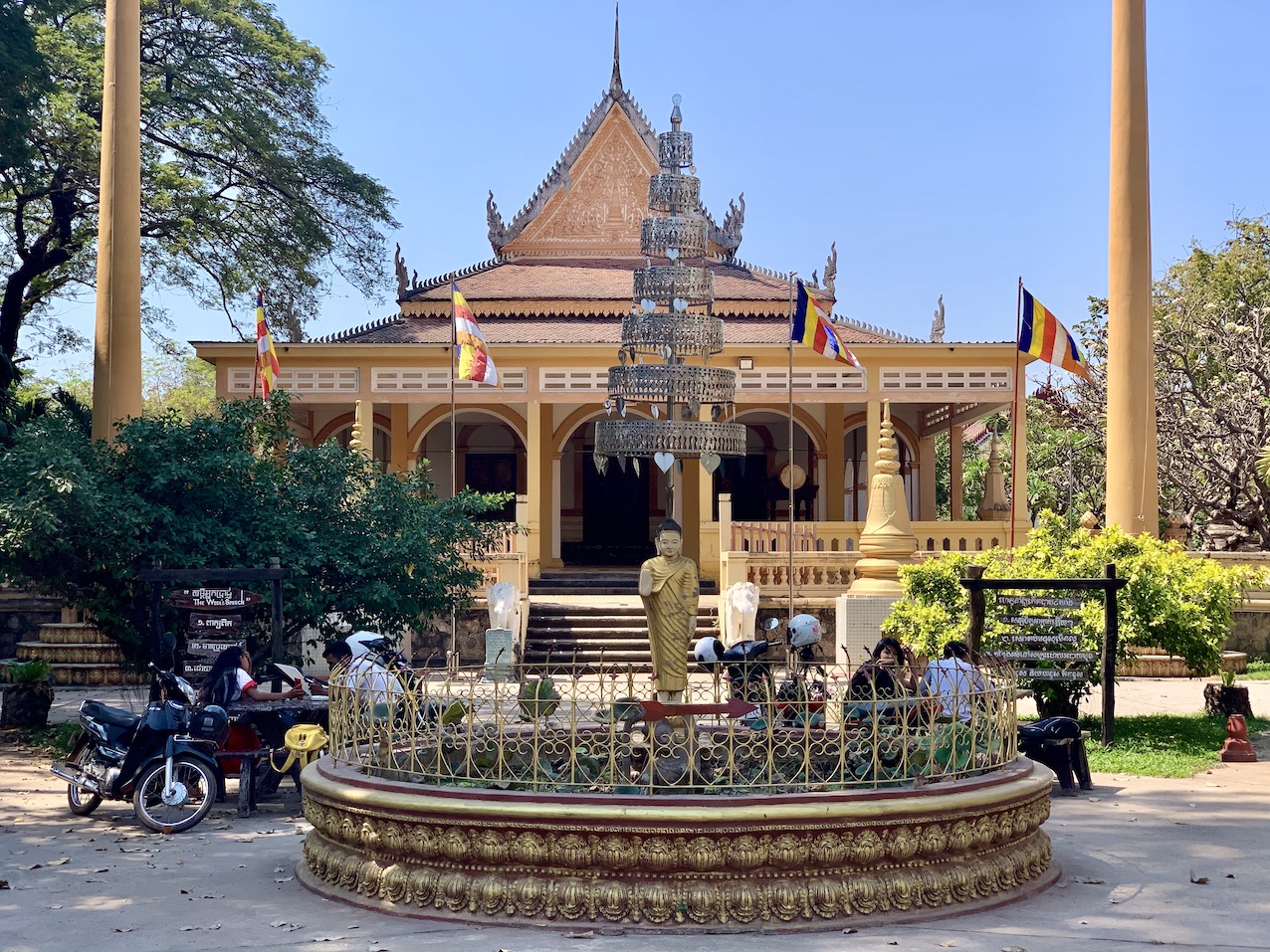 There are a number of fine temples and pagodas to enjoy in Siem Reap. My favourite of these is the pretty Wat Damnak Pagoda, SR’s largest Buddhist centre. It lies on the eastern side of The Siem Reap River jus a few minutes from the heart of downtown. Moreover, it was just a short tuk tuk ride from our place at Foster Apartments, in the neighbourhood of Sala Kamreuk. Thus we decided to go and have a look one afternoon in a lull between blogging and teaching duties. 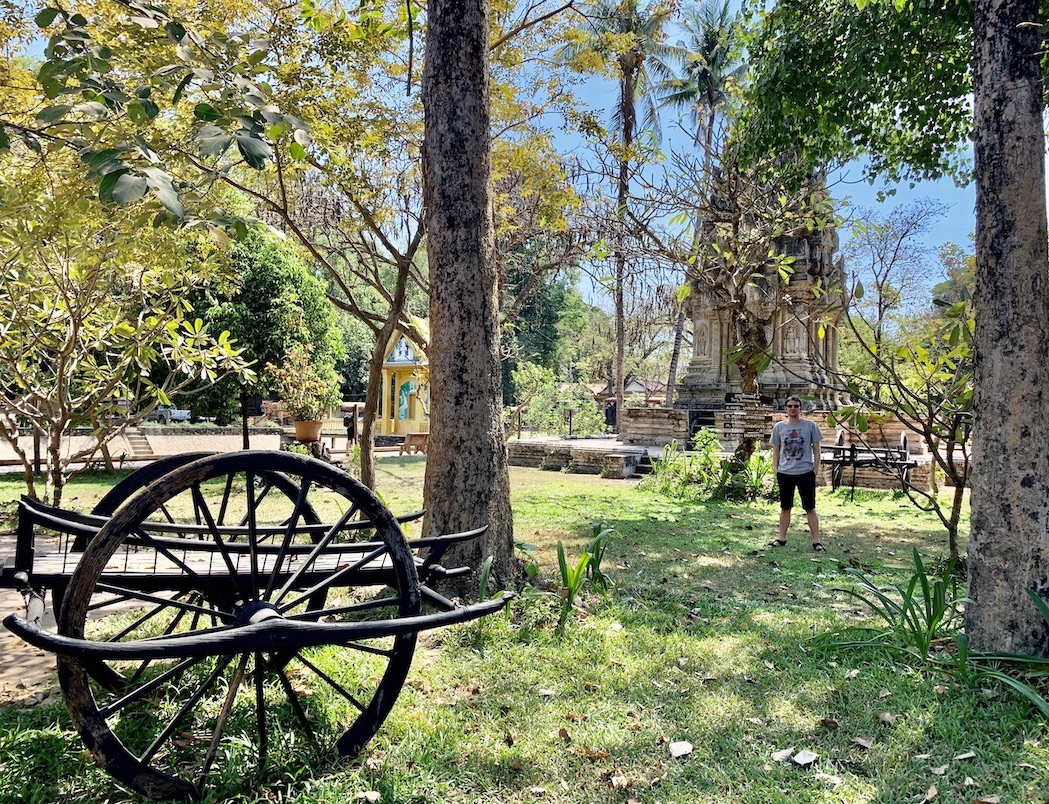 We immediately loved Wat Damnak’s peaceful vibe. I’d read that a community of Buddhist monks live here, though there was no sign of them that sleepy, sunny afternoon. In fact, it was just us as we made our way through the main entrance into the pretty, wooded garden. 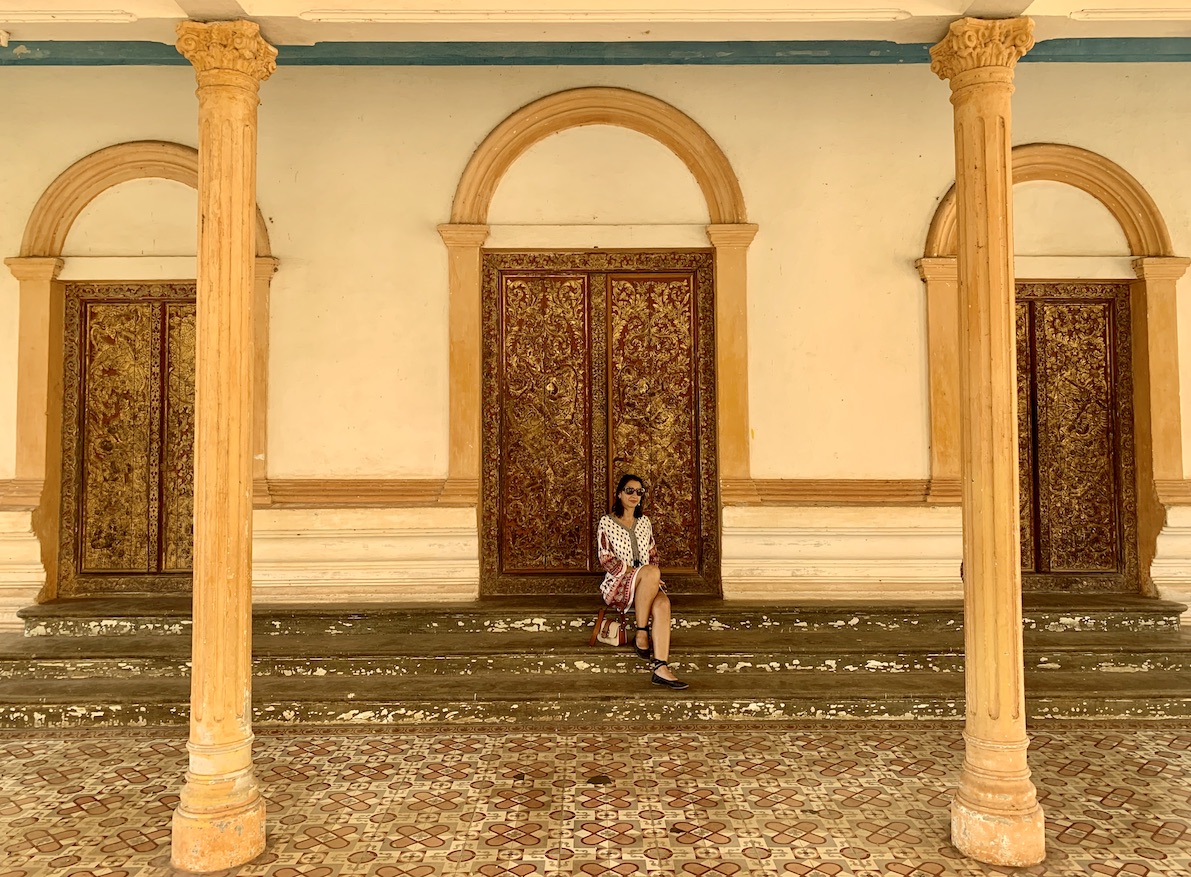 The pagoda dates back to the early 1900s when a royal palace was built here for King Sisowath. The king’s main residence was in Phnom Penh, but this is where he stayed during his visits to Siem Reap between 1904 and 1927. It’s certainly a handsome building, although sadly we found it locked up that day. 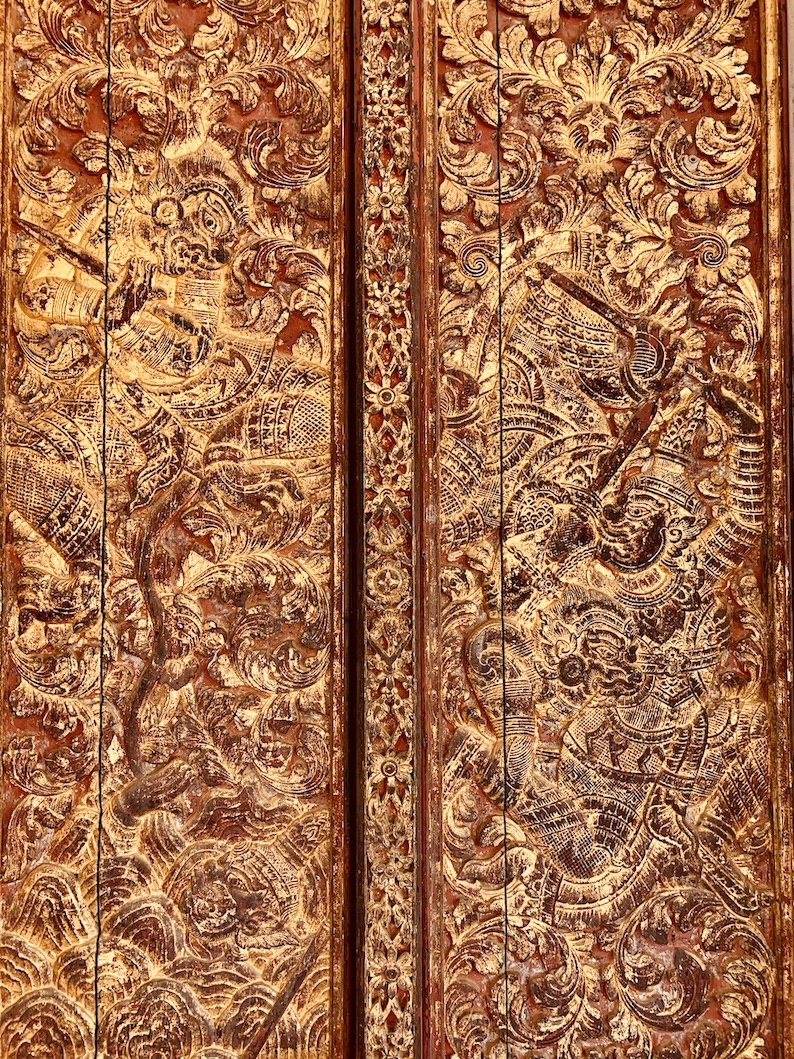 Nevertheless, there was plenty to enjoy and admire with a walk around the stunning exterior. Particularly its intricate doors, decorated with flowers, warriors and mythical creatures. The above red and gold shutters feature scenes from Reamker (Glory of Rama), Cambodia’s national epic poem. A staple of the National Ballet scene, it is a dramatic tale of good versus evil and explores the themes of justice and fidelity. 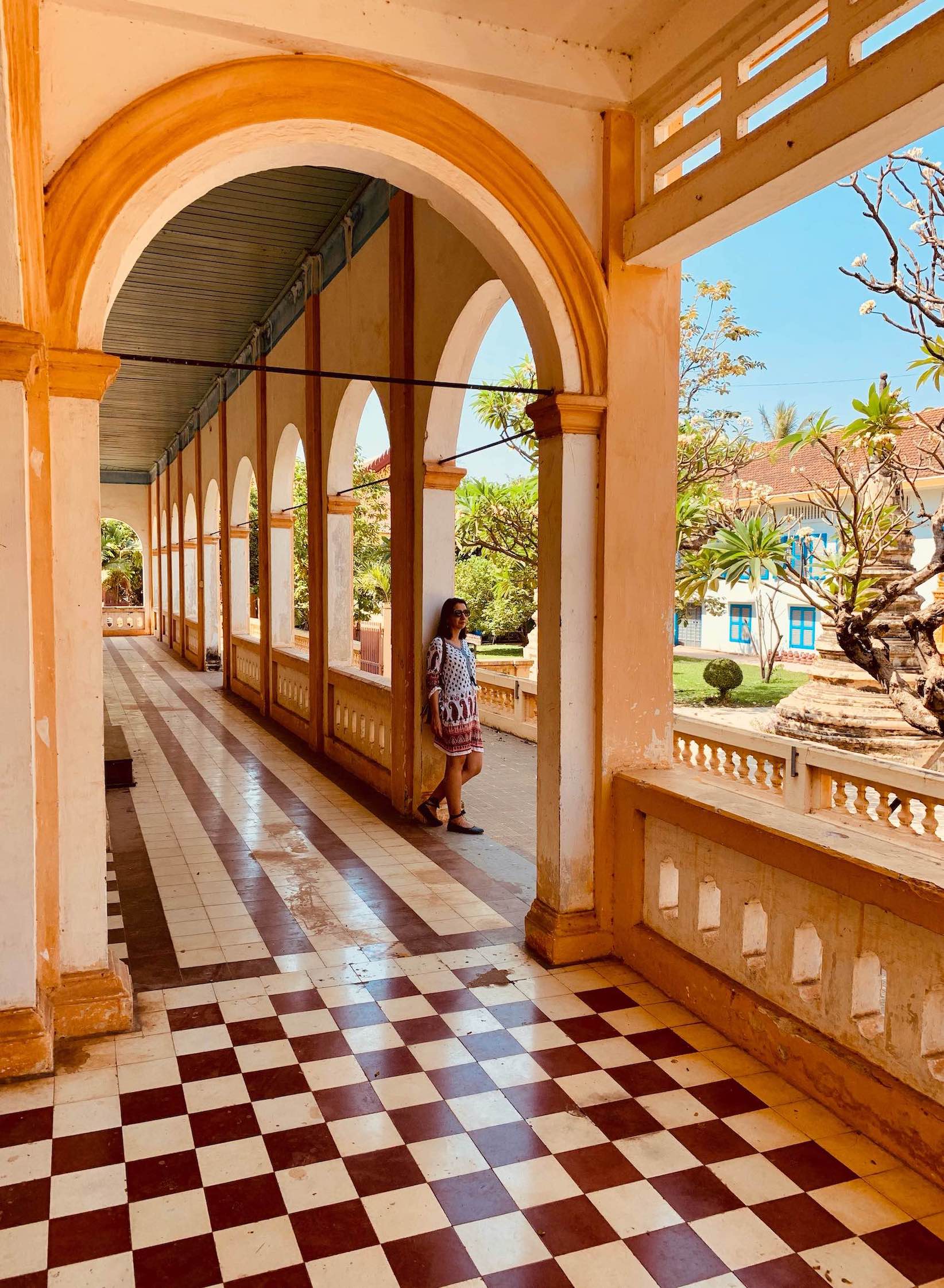 By the 1940s the palace had been handed over to monks, who turned it into Siem Reap’s main Buddhist site. However, in the mid 1970s the murderous Khmer Rouge stormed the compound, slaughtered its residents and turned the place into a military base. 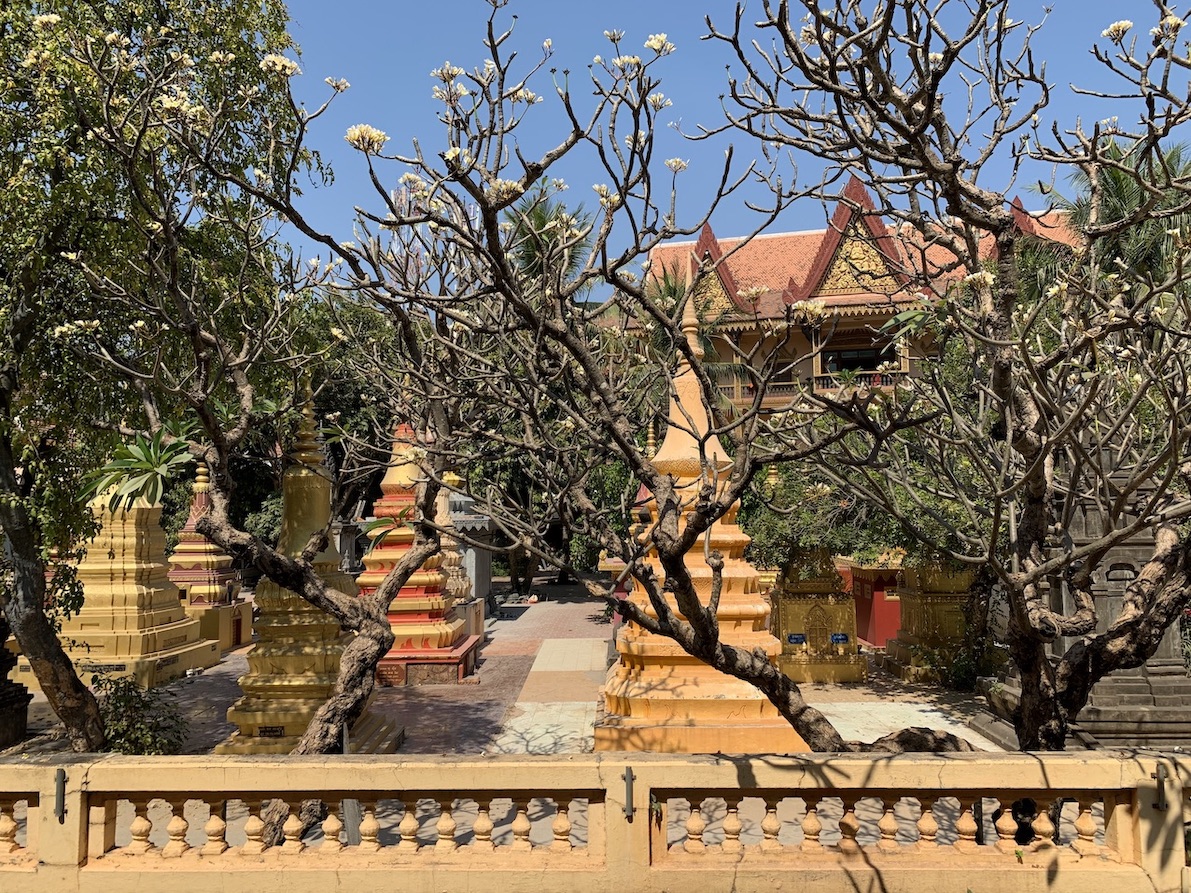 To the side of the pagoda stands a leafy cemetery, the final resting place of numerous monks who’ve lived here. The cemetery sprang up following the fall of Pol Pot as part of an effort to restore the complex as a Buddhist pagoda. 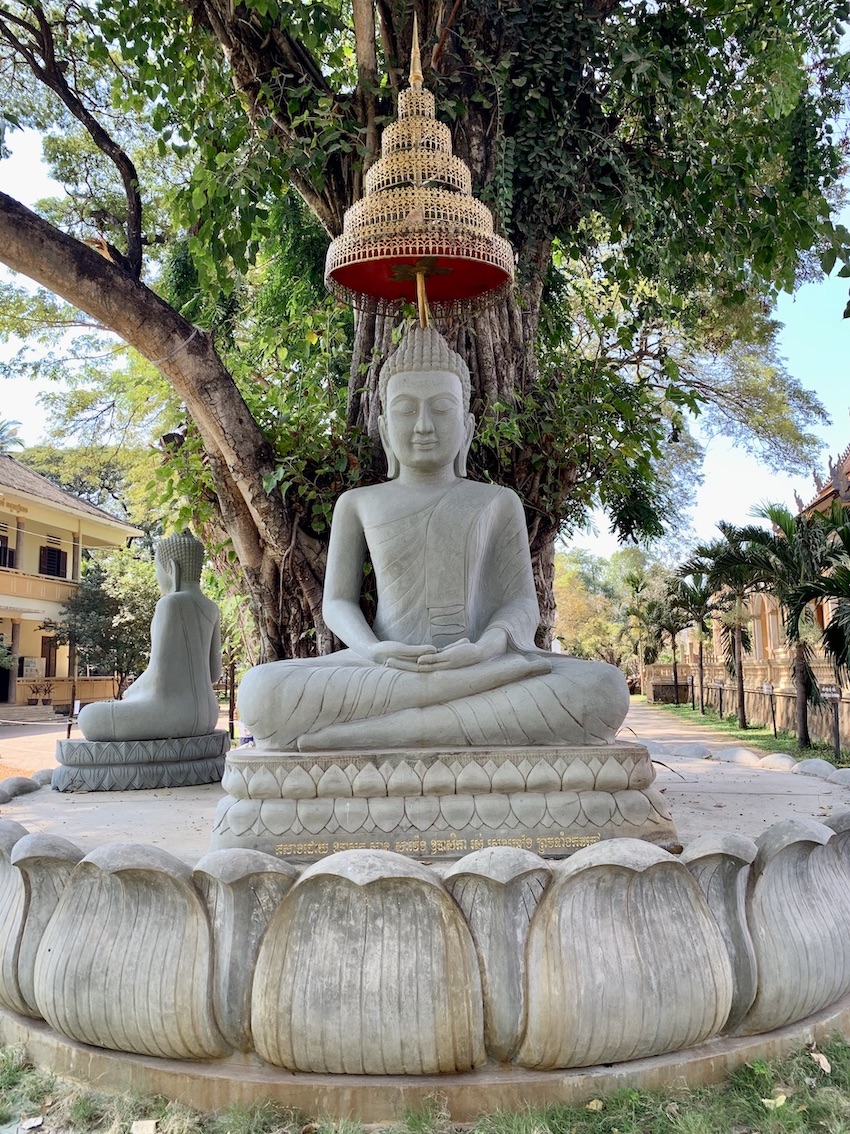 The monks have done a wonderful job with the pagoda gardens. The grass, plants and flowers are well kept and there are plenty of sculptures, statues and shrines to discover. In recent years the pagoda has morphed into one of SR’s leading education centres.

In 2005 the monks established The Life and Hope Association in order to provide education to the city’s poor and vulnerable. The pagoda also houses the lovely Centre for Khmer Studies, which supports research in the social sciences, arts and humanities.

What To See & Do Siem Reap. 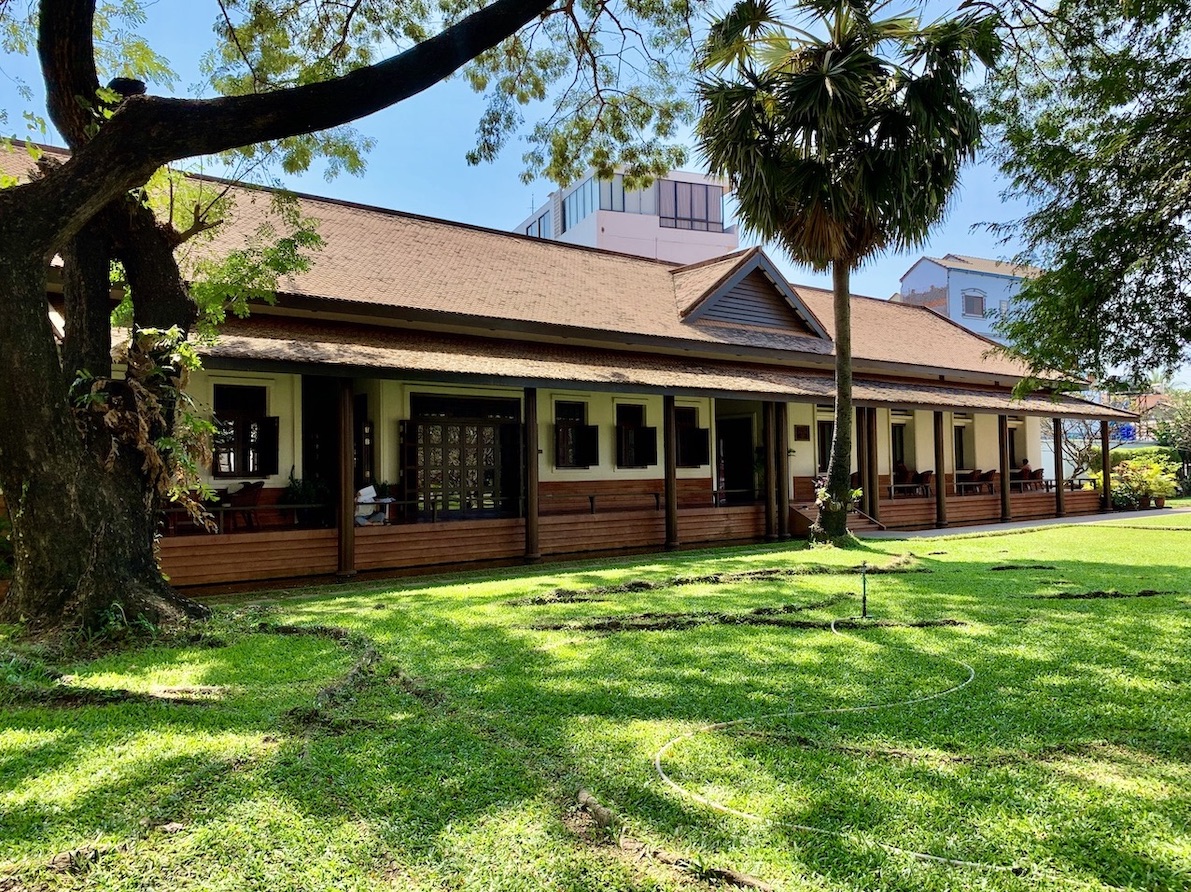 During our wander, we saw a few students quietly working on the building’s gorgeous, wooden porch. The centre includes a public library, with a grand collection of books, a journals section and half a dozen computers. Apparently, a number of scholars also work here republishing historic manuscripts and translating foundational texts into Khmer. 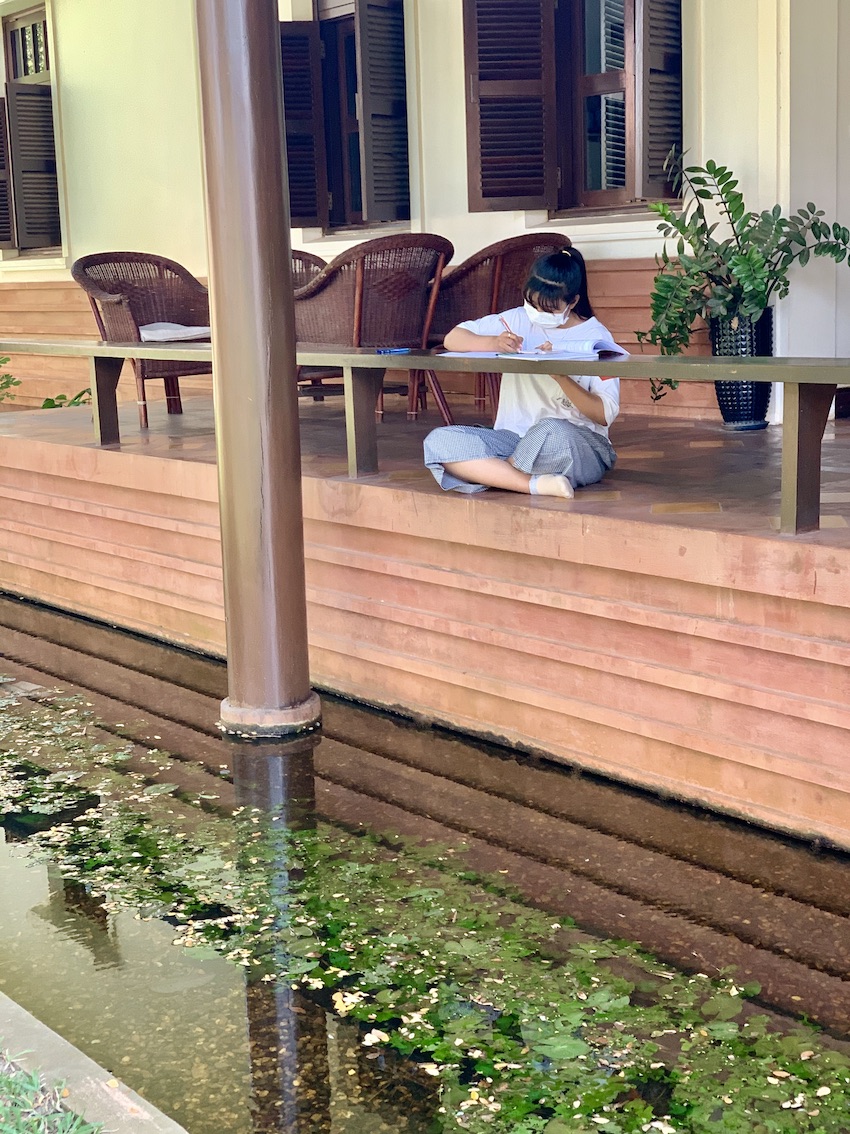 The centre has support from several phlianthropic organisations from France, The United States and within Cambodia itself. Perhaps most importantly of all, it seems to be an idyllic home for a handful of lucky cats. 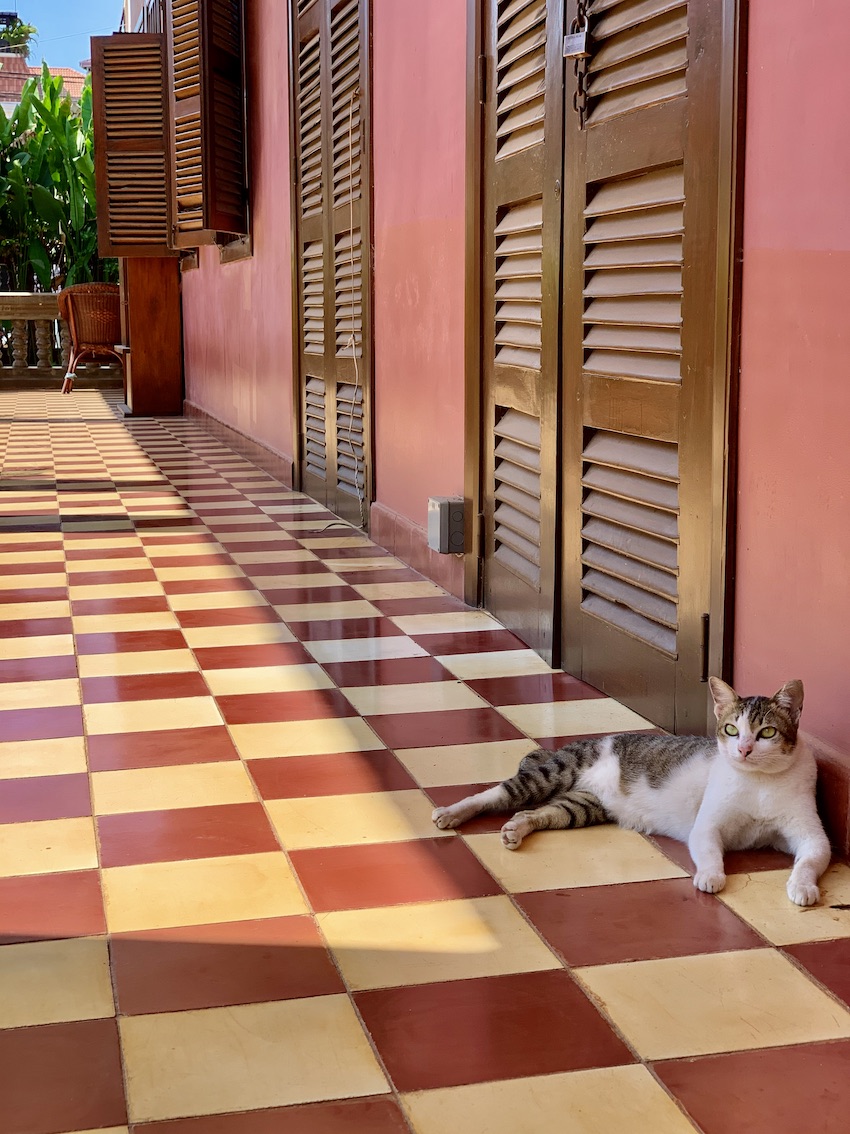 Wat Damnak’s educational vibe oozes right through every corner of the grounds. Look out for the cutesy wooden, handmade signs made by the pagoda’s students. Sure, this is normally the kind of cheesy, fridge-magnet-wisdom that gets my eyes rolling. Somehow though, it seems to belong here. Certainly more than on some attention seeker’s disingenuous Instagram feed. 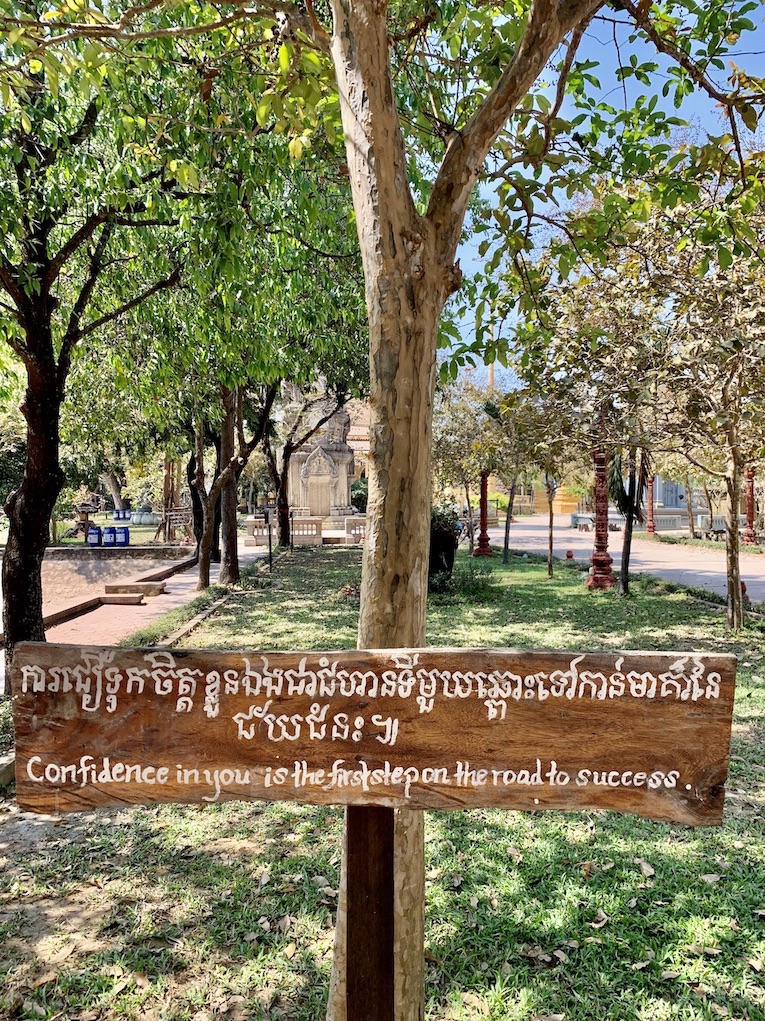 At the back of the complex, we came across the pagoda’s modest but lovingly crafted public school. Classes were in session as we walked by and the air was punctuated by the sound of happy chatter, scribbling pencils and group chanting. Consequently, it was impossible not to smile as we exited Wat Damnak Pagoda into the relentless noise and dust of Siem Reap. 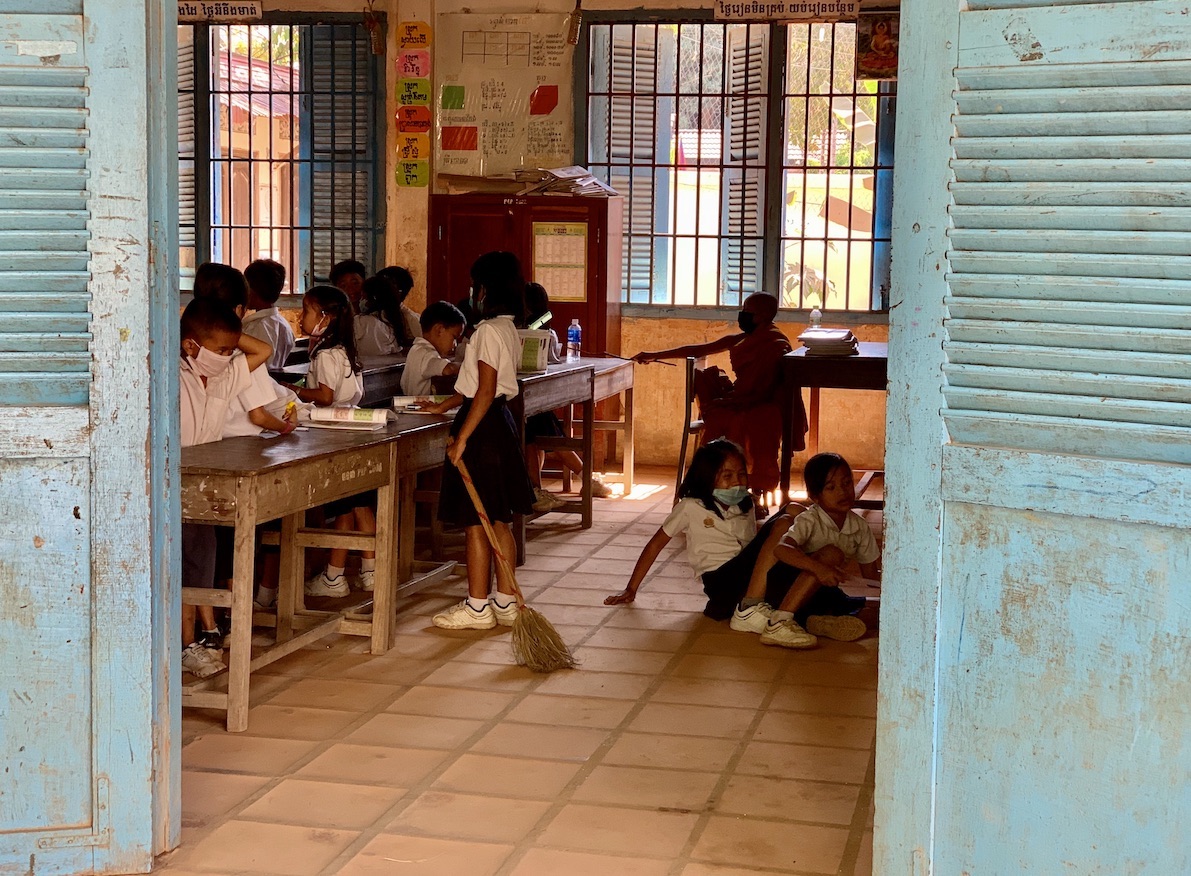