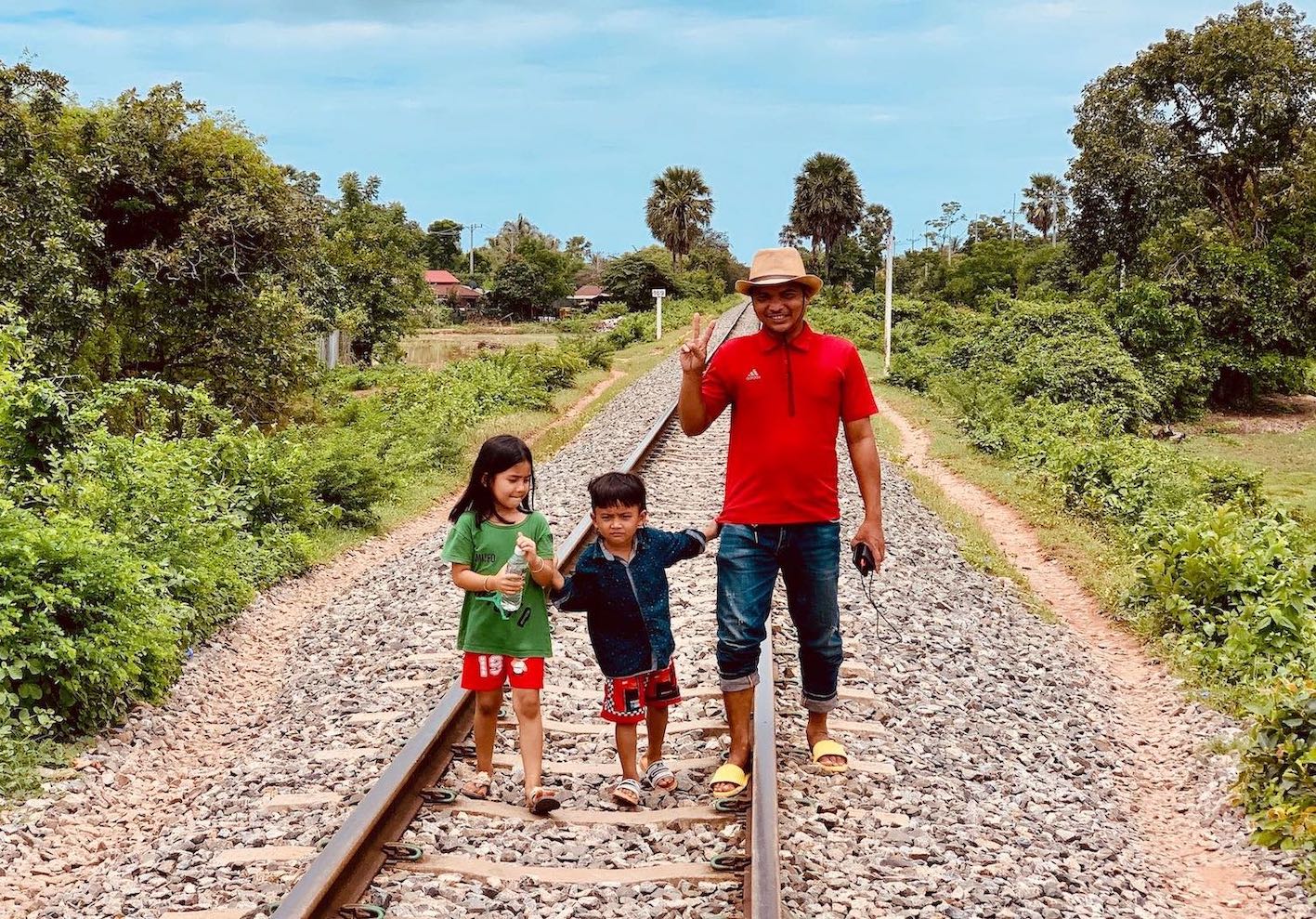 July-September 2020. Most travellers only spend a few days in the city of Kampot, using it as a base for nearby Bokor National Park. Indeed the majority of blog articles focuses exclusively on the park and a scattering of other provincial sites, such as La Plantation.

One advantage of spending two months here is that we could make time for the road less travelled, uncovering some fascinating and largely ignored sights. Moreover, we got to know some of the locals and expats who live here, which helped us get under the skin of the place. Following my individual location reports, here’s my roundup of Cool Spots Around Kampot. 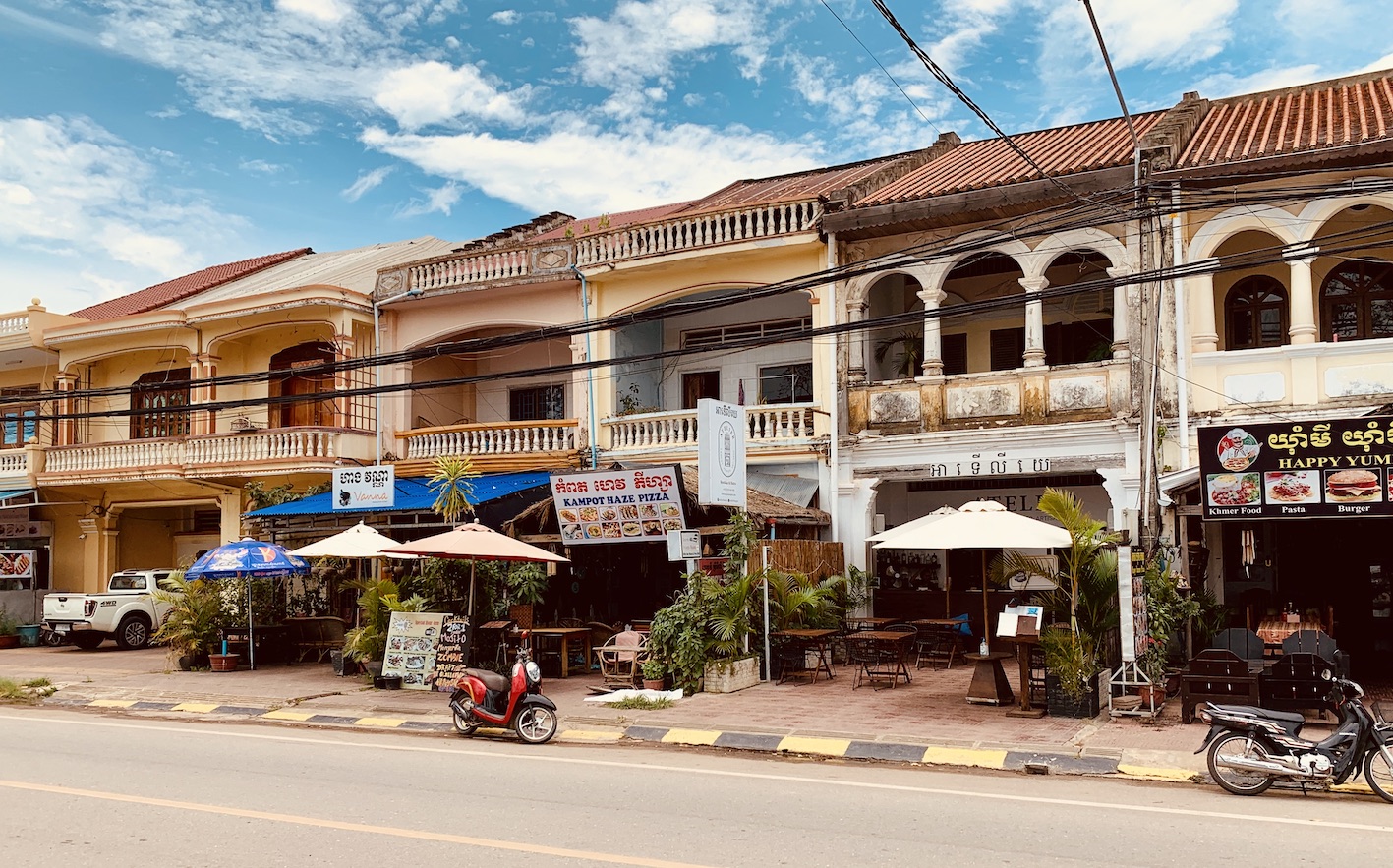 One of the joys of a visit to Kampot is a stroll around its Old Quarter, thanks to its lovely rows of French colonial buildings.

A little further down the river, near Kool Kampot Guesthouse, stands a trio of gorgeous structures, often overlooked by the casual visitor. The first of these is Kampot Provincial Museum, an exhibition of regional life hosted within the former French Governor’s Mansion. 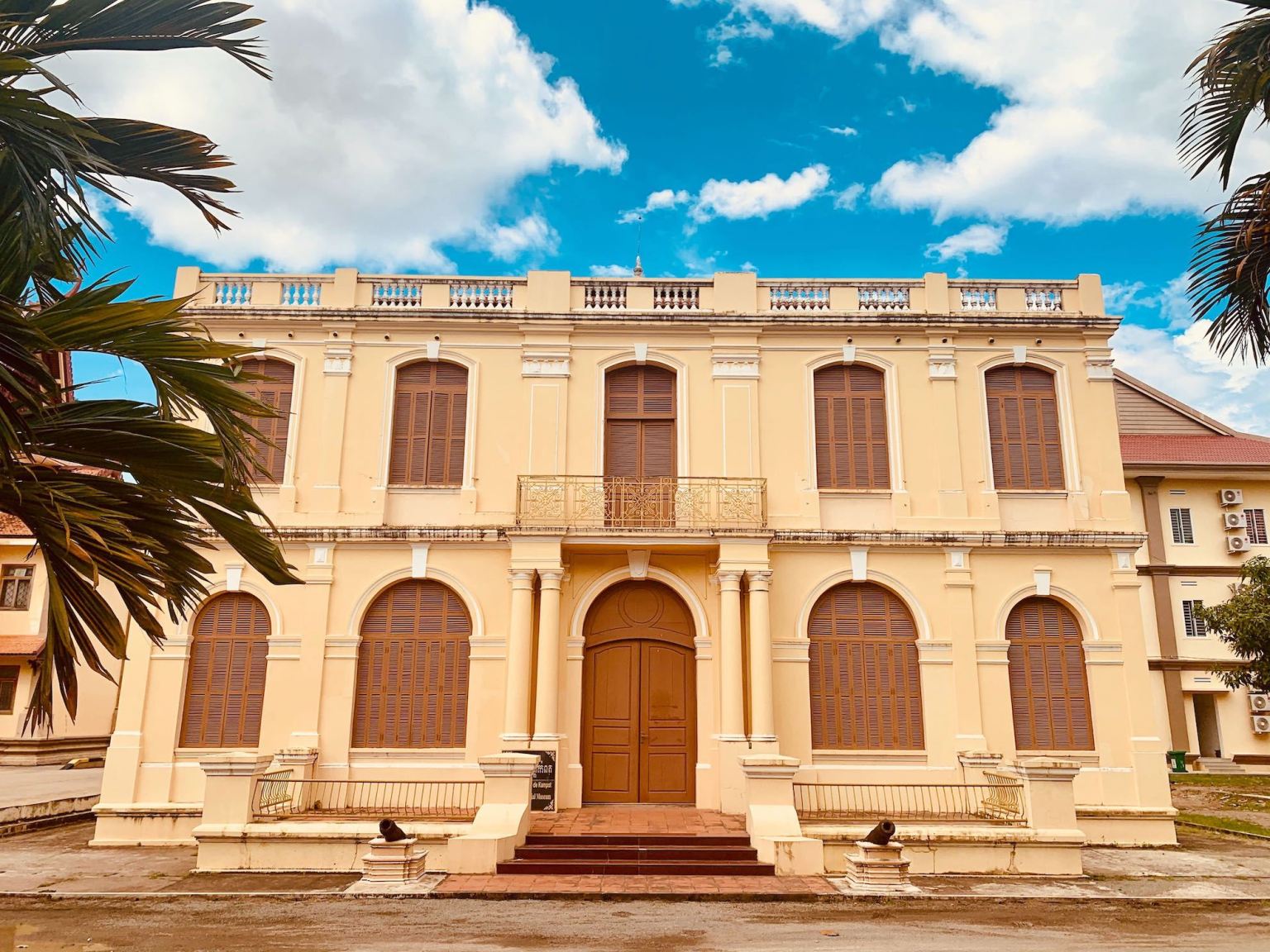 Unfortunately for us, the museum remained closed for the whole of August and September, despite our many attempts to visit. Normally, they open seven days a week between the hours of 0800-1100 and 1400 to 1700. According to online reviews, the museum is very low key, but hey entry is just $2. 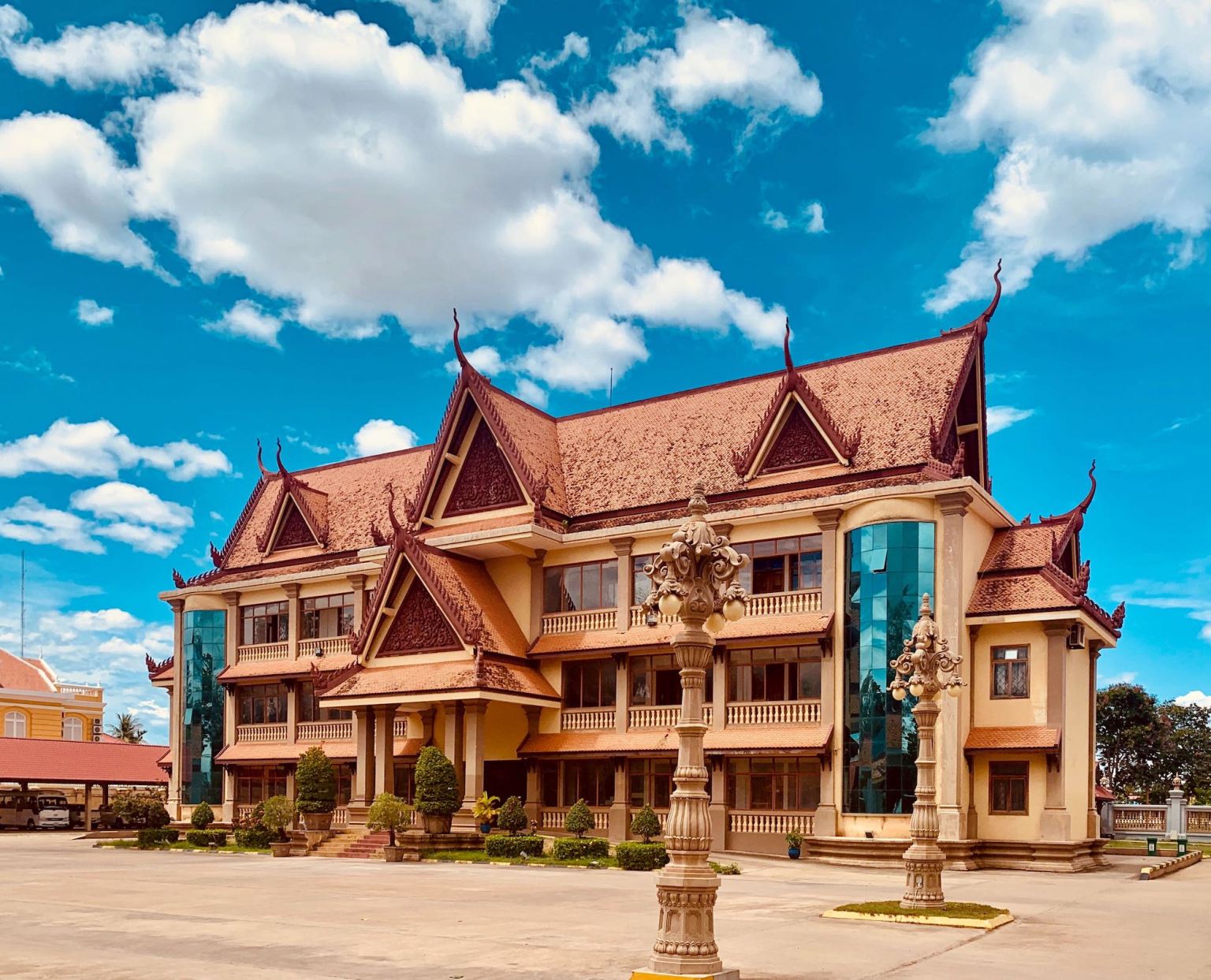 Next door to The Provincial Museum, stands the dramatic Provincial Hall. Although designed in the traditional Khmer style, it’s actually a modern building dating back to the 1990s. As functional government offices you can’t actually go inside, but it was still cool to grab an exterior shot. 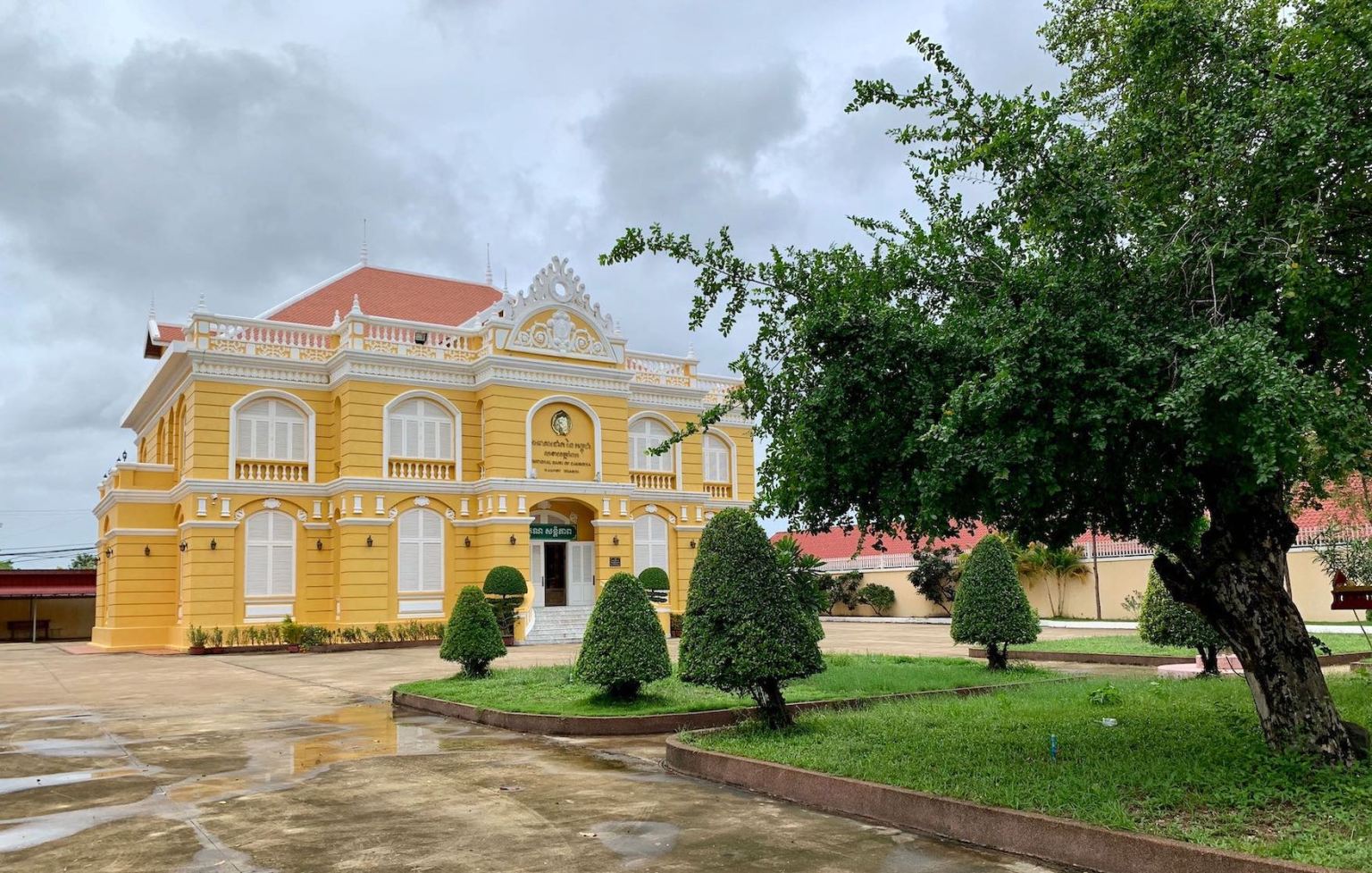 Completing the trio is Kampot’s branch of The National Bank of Cambodia. Beautifully restored from a dilapidated old colonial townhouse, the centre opened in 2015. During our stay the gate to the compound was kept shut, except by appointment. Thus I had to snatch my photo through the iron bars. 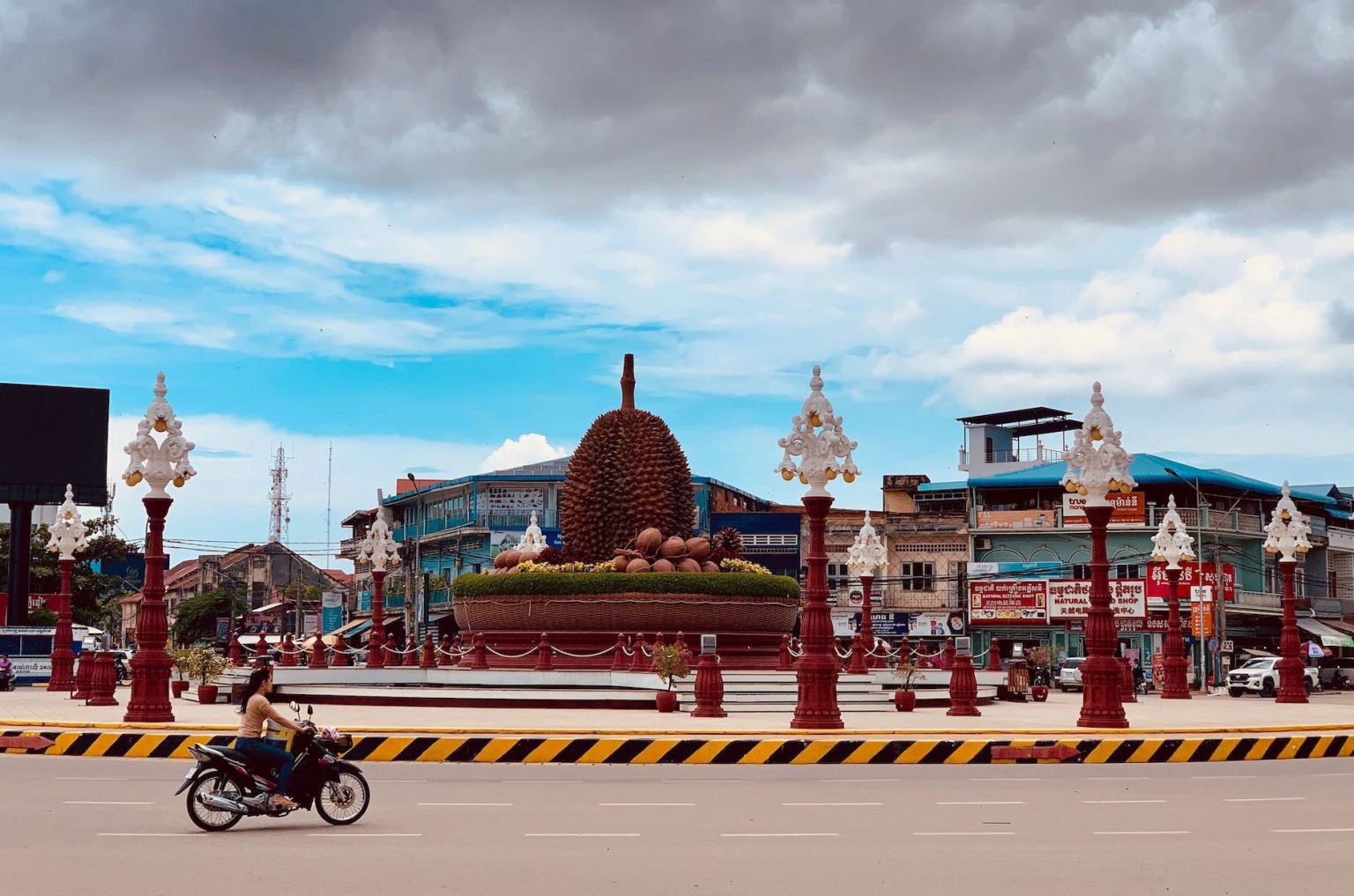 While on a Kampot walking tour, it’s also fun to go roundabout hunting! The city centre is home to a number of unusual and quirky roundabouts. Take the Durian Roundabout, for example, the city’s charming homage to the world’s most divisive fruit. Loathed by the majority of westerners for its unbearable smell, many Asians adore the durian. 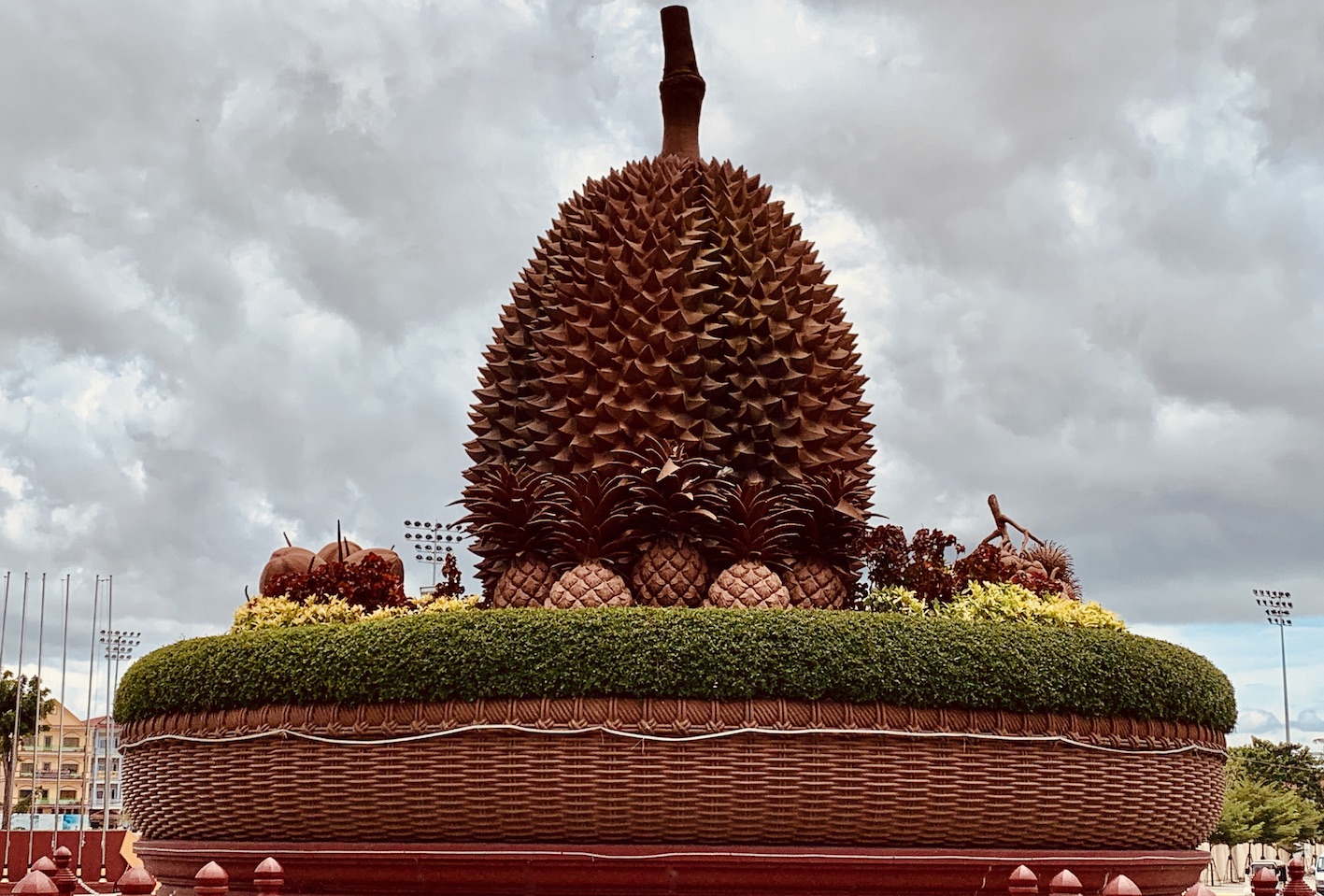 What’s more, Kampot is Cambodia’s durian capital, with around 1300 hectares of farmland producing over 1200 tonnes of durian per year. Much like the fruit itself, I found the roundabout both ugly and transfixing. 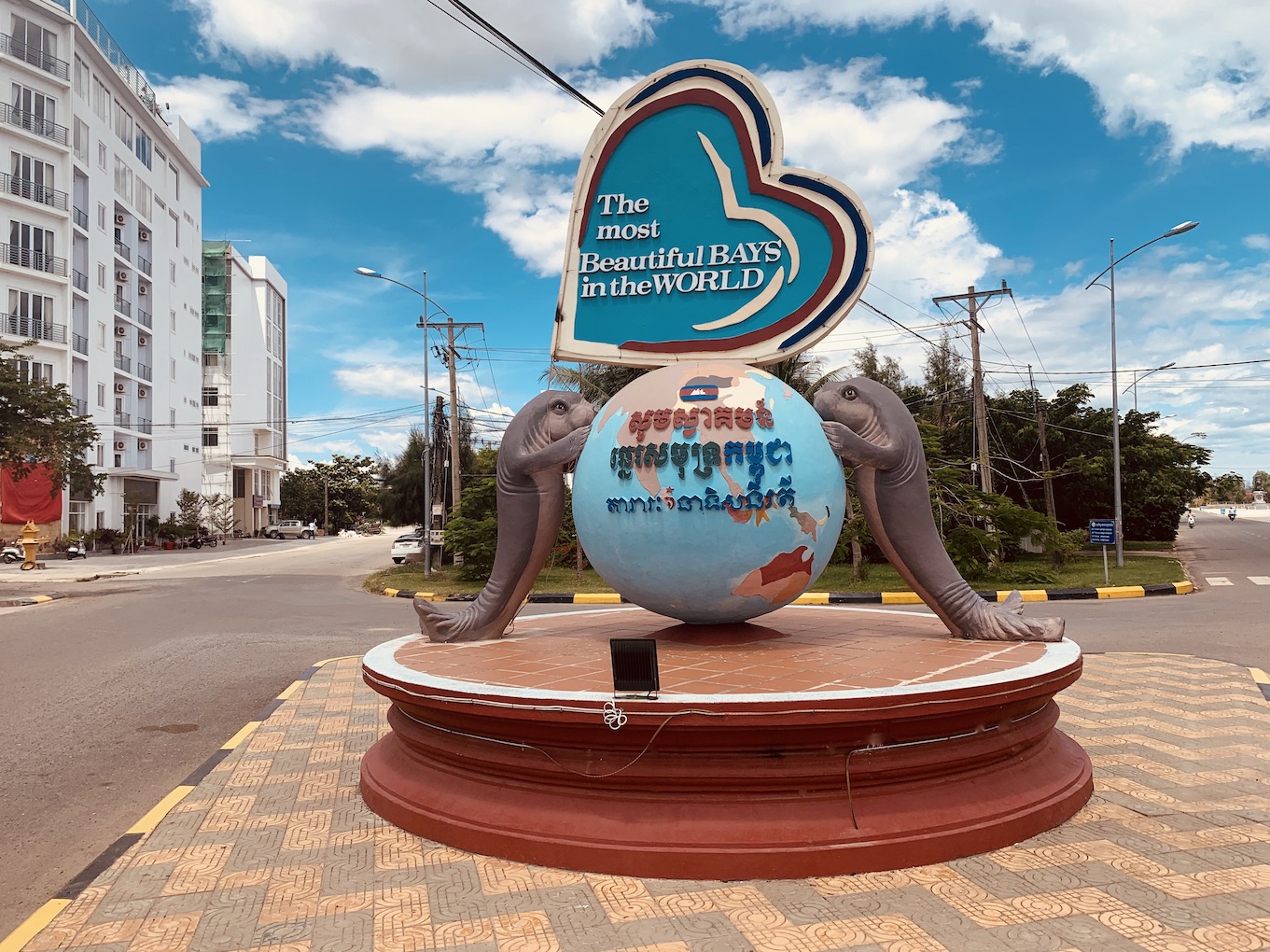 I’m not sure what message they were going for with The Seals Roundabout, just across from The Rusty Keyhole Boat House Restaurant. I can just about swallow the notion that nearby Chhak Kep Bay is one of the world’s most beautiful coastal strips.

As for the seals, I’m a bit lost as to why they’re there. Despite also being one of Kampot’s ugliest roundabouts, I’d still find a place for it in my never-to-be-published Kampot Roundabouts coffee table book. 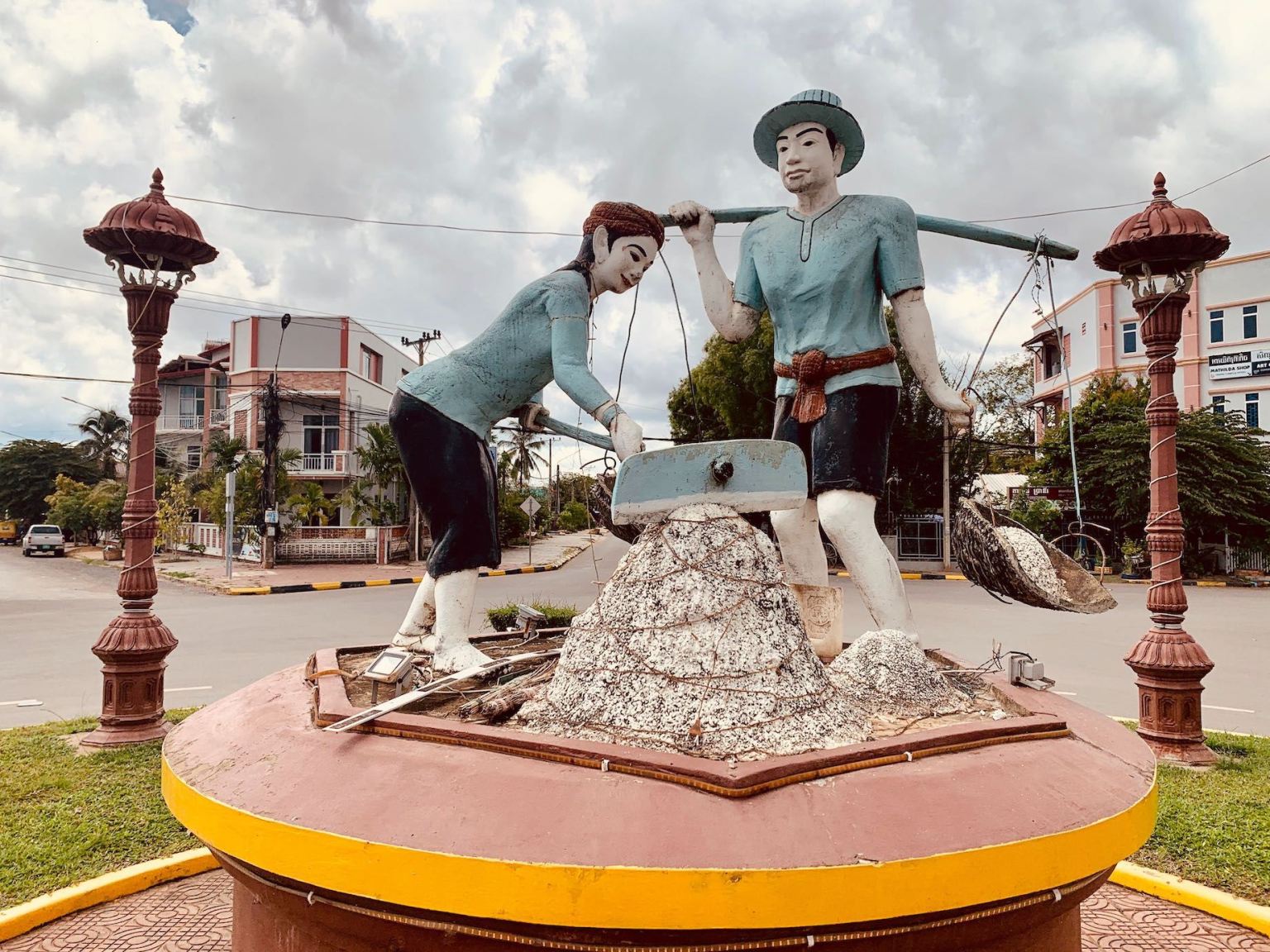 A more noteworthy Kampot landmark is the Salt Workers Roundabout, which stands in tribute to the region’s long history of salt production. They say there are over 1600 salt farmers across Kampot province. In 2020 Kampot produced over 84000 tonnes of salt. 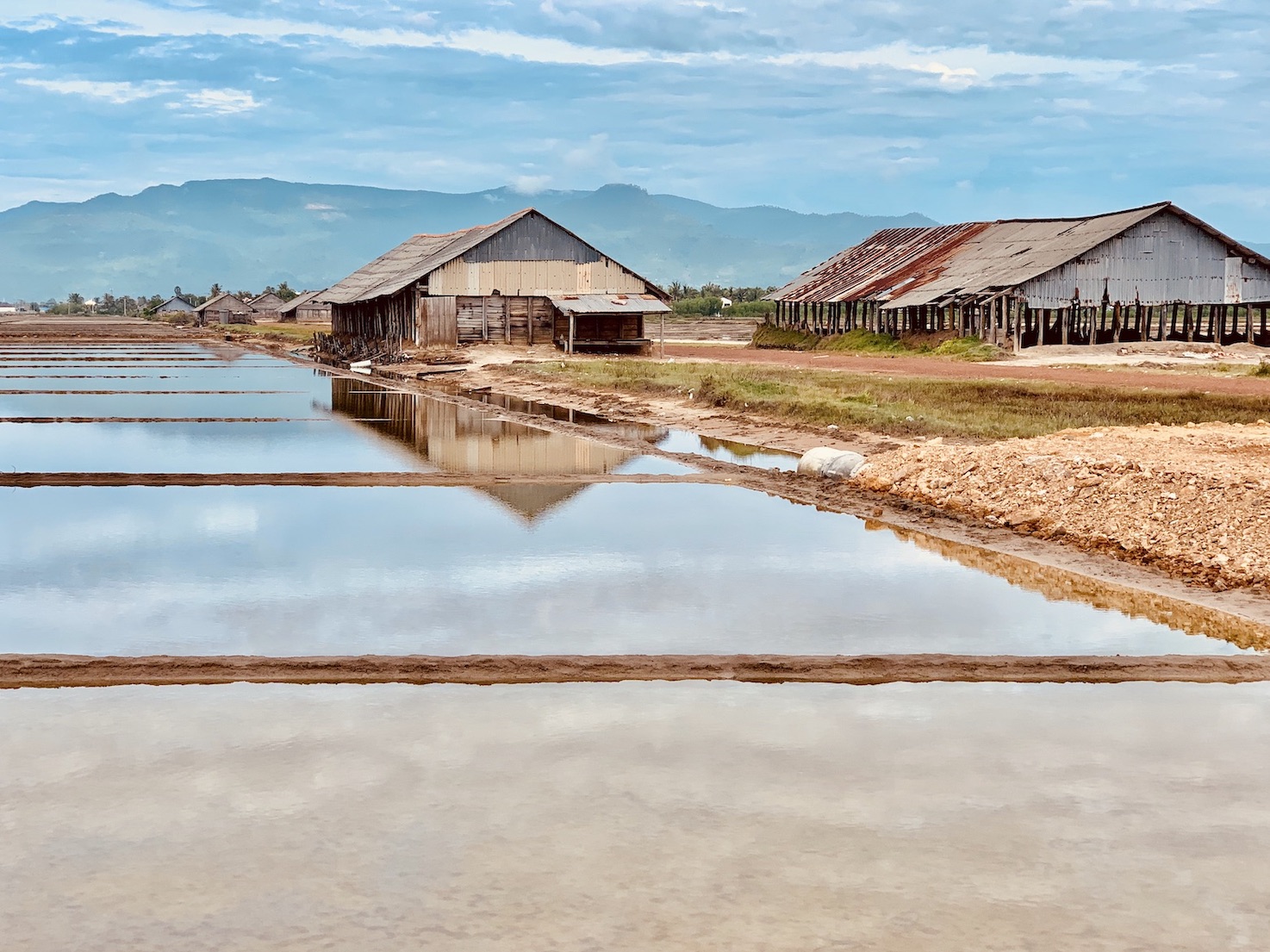 One afternoon, Sladja and I went to see the salt fields themselves. It was the off season, hence the road was dead and the empty fields looked quite ghostly. Due to its close proximity to the ocean, farmers manipulate the local waterways to let in water. They then block those waterways and wait for everything to evaporate, leaving behind salt crystals. 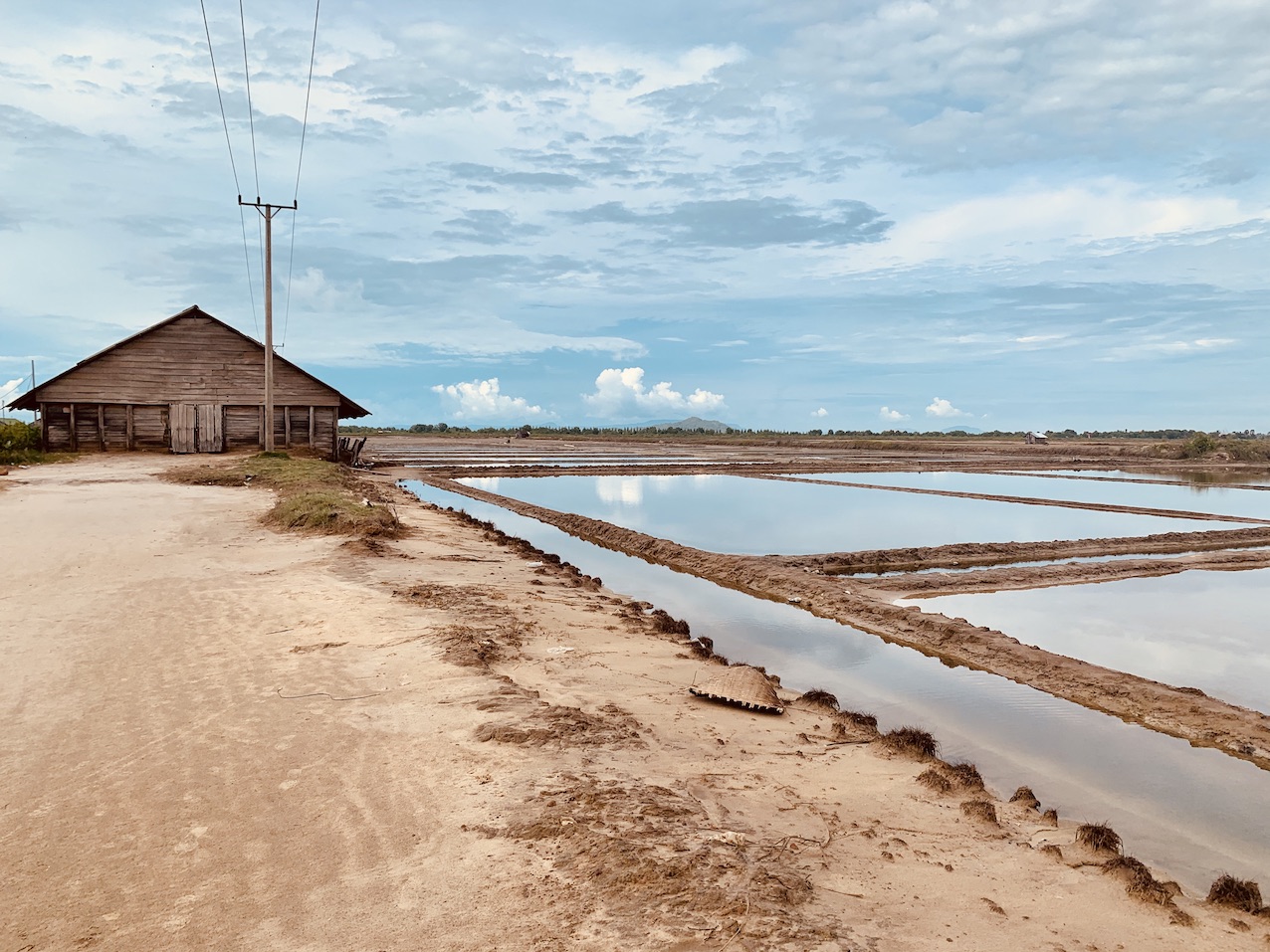 It really felt like an apocalyptic scene that afternoon, especially with the large, hulking warehouses that store all the raw salt. During the farming season, which runs from December to April, one can also visit Kampot Salt Museum. It’s a small centre that provides a brief overview of the local industry. Furthermore, one can buy a chunky bag of local salt for $2. 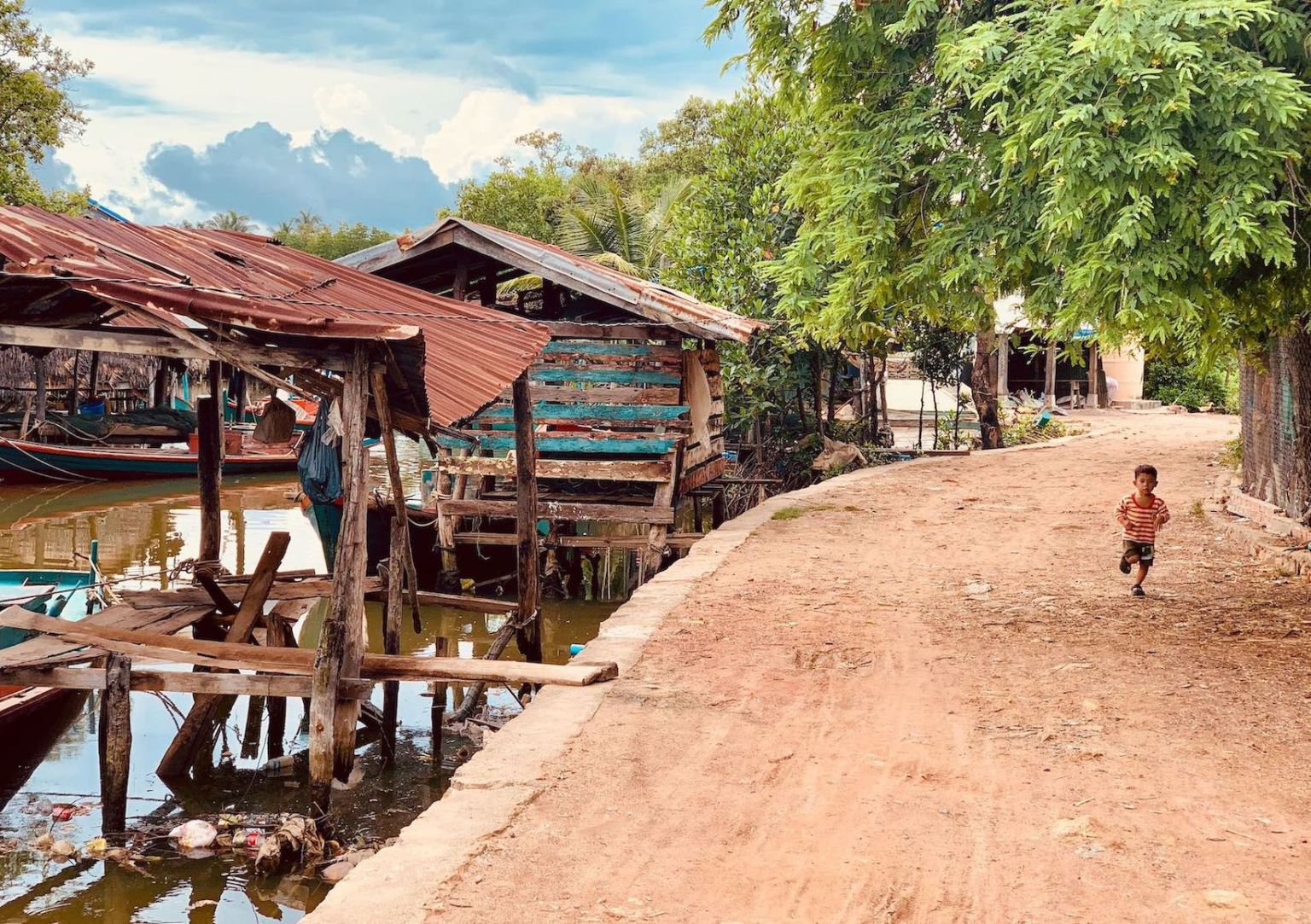 Staying with the water theme, Kampot’s rural roads also gave us the chance to add to our collection of Cambodian fishing villages. In Siem Reap province, we saw the amazing stilted villages of Kampong Khleang and Kampong Phluk. In contrast, Kampot’s Muslim Fishing Village (known locally as Phum Nesath) is a tiny little community with low-rise stilt houses and a single narrow waterway. 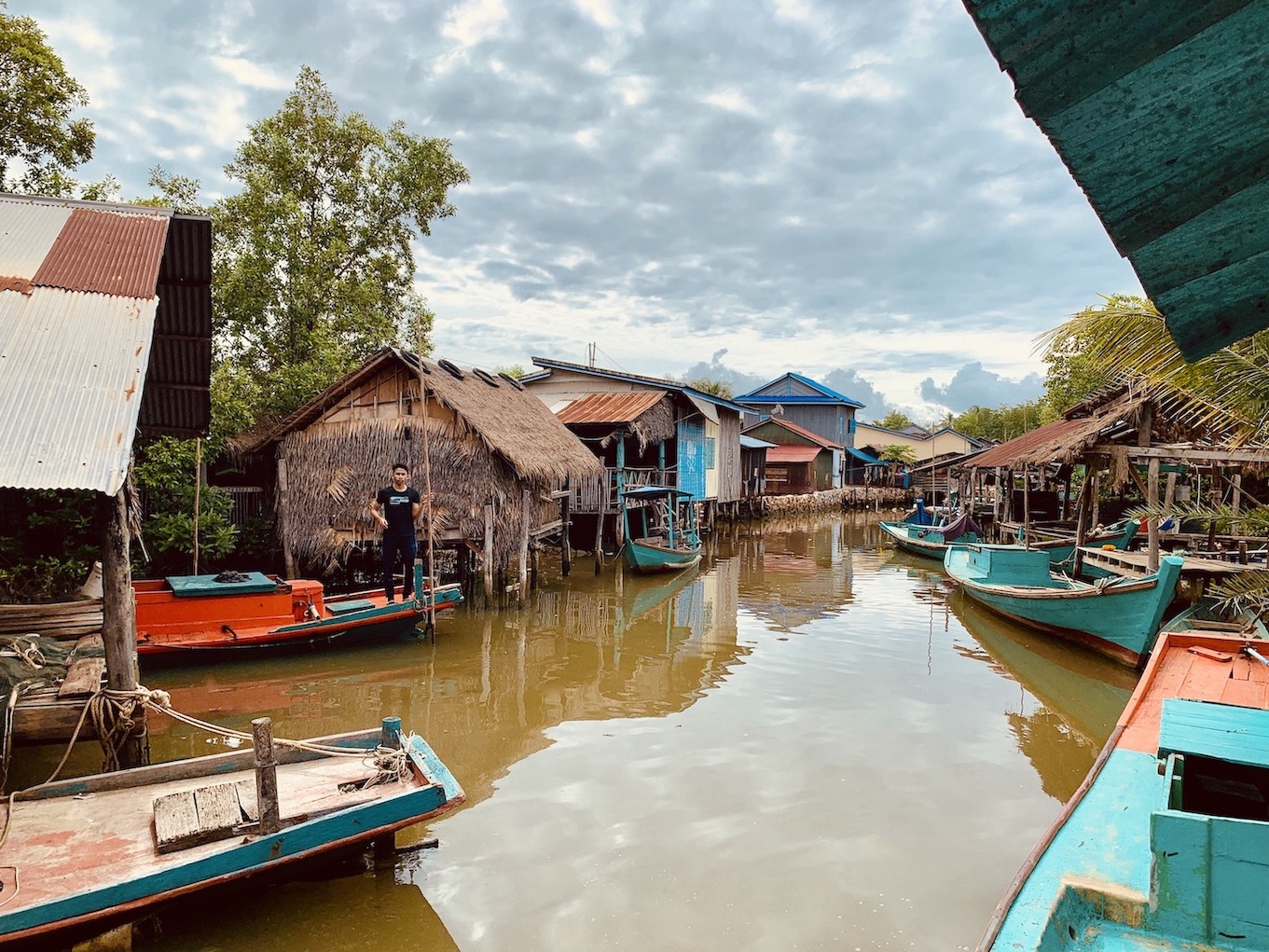 As with their Siem Reap counterparts, village life revolves round fishing and boat building. Most days, locals will take these boats, moored in the main street, out to sea to fill their nets. It was a brief but fun tour and the locals were really friendly, with one old man even posing for my camera. 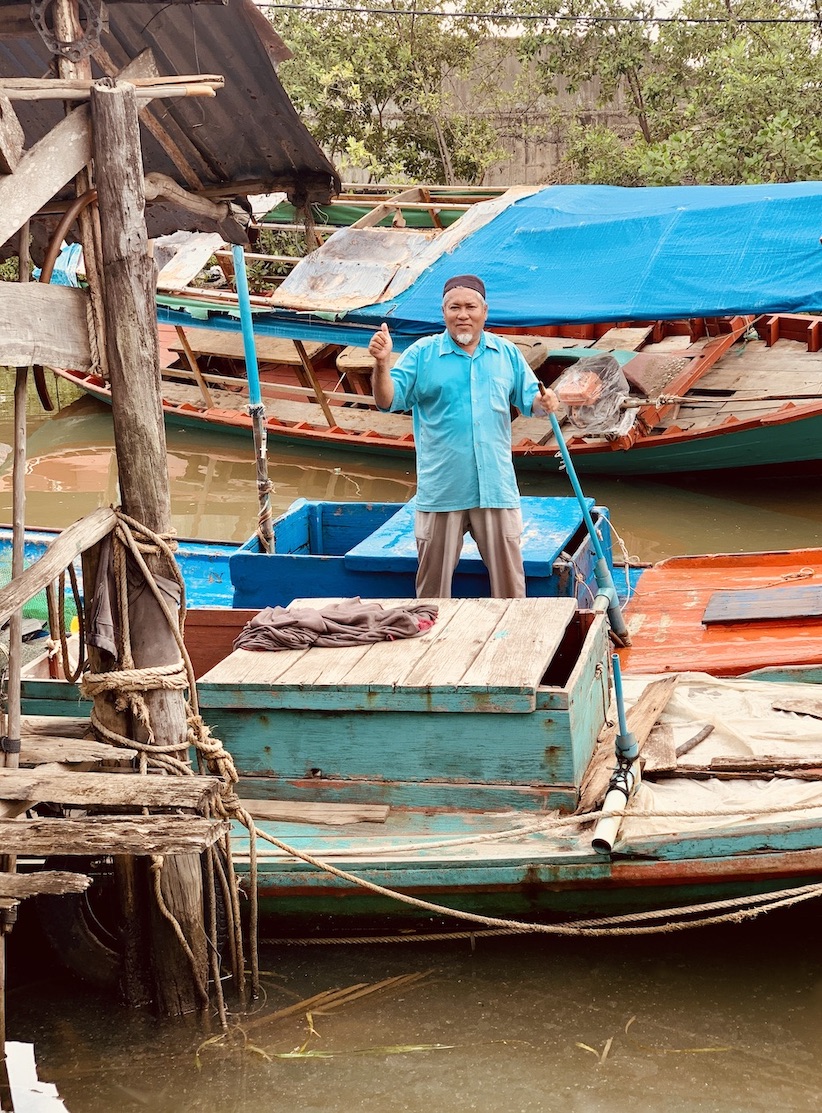 Back in Kampot’s city centre, one of our chief complaints about daily life was the general absence of a park or extended green space. That said, there is the Lotus Pond, a giant deep green bowl of pretty lily pads. It really is lovely and, surprisingly, as large as some of the waters we saw at the lotus farms of Siem Reap. 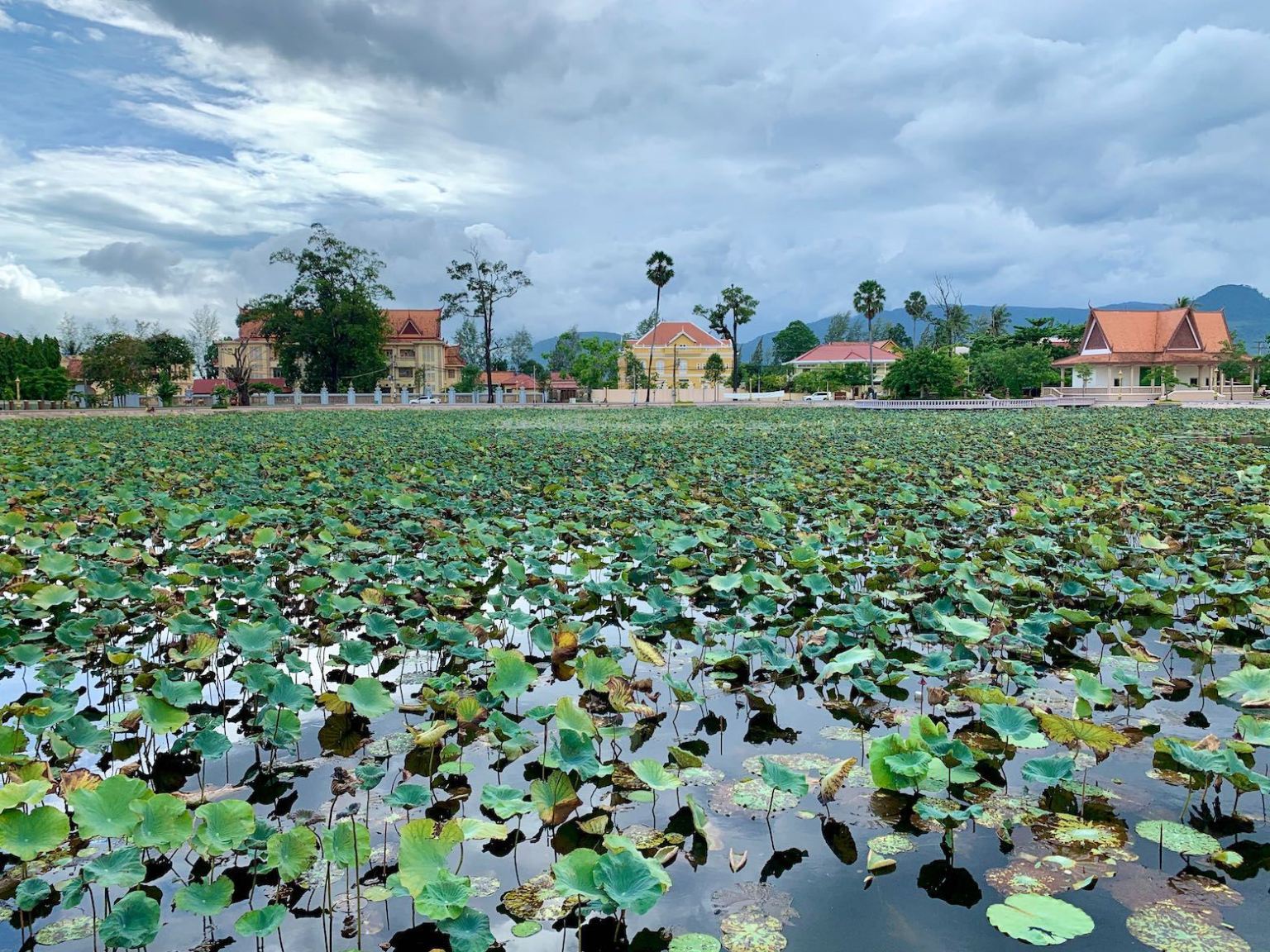 On occasion, it’s possible to see local men and women in the pond, up to their chests in water. This often happens early in the morning at daybreak so they can take bags of lotus stems to the local markets. In Cambodia lotus stems often find their way into salads. The seeds meanwhile, can be eaten raw, while the flower itself decorates traditional Khmer dishes, such as Beef Lok Lak. 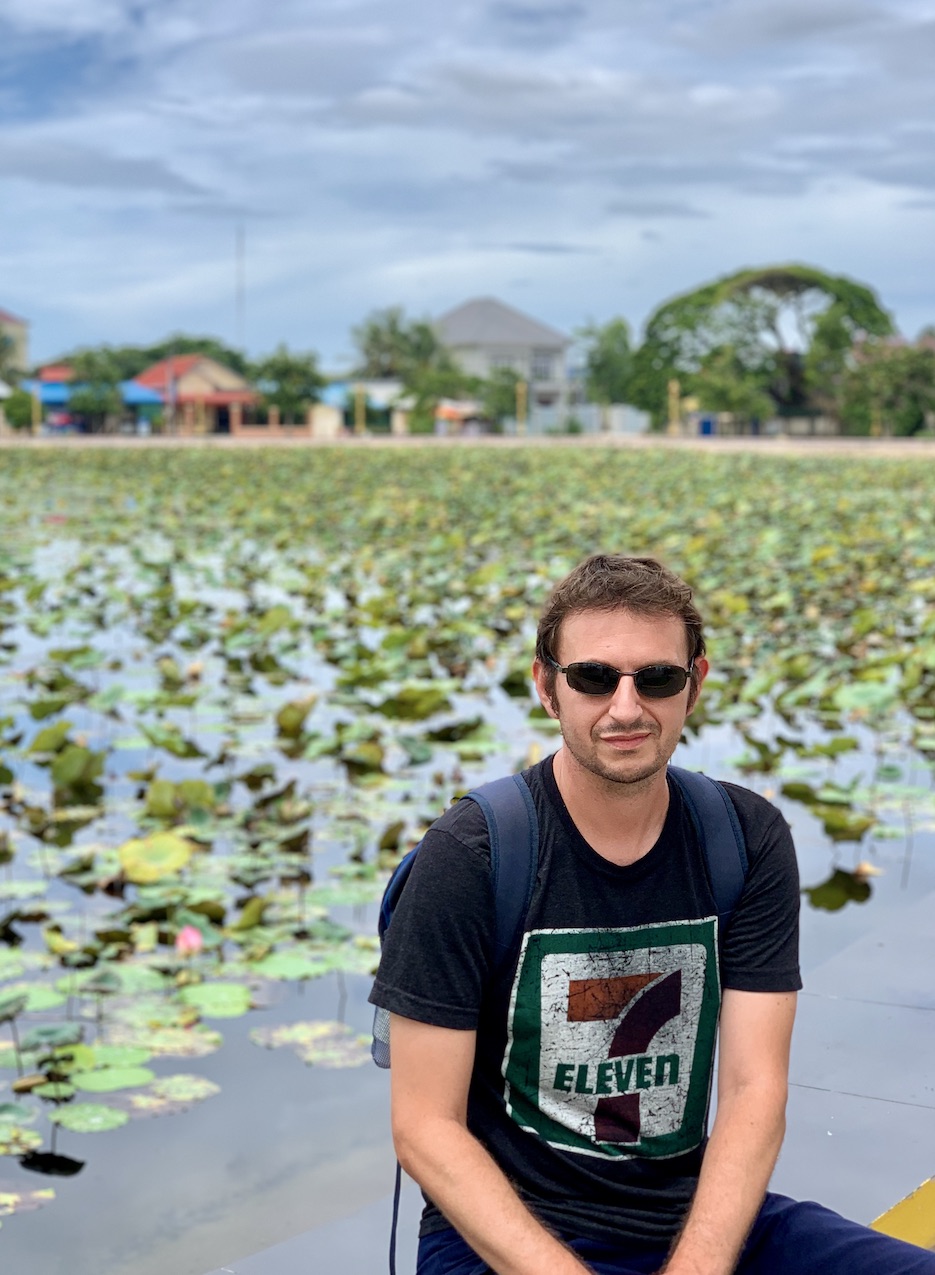 A short walk from the pond, lies one of Kampot’s quirkiest spots. This is the abandoned Jue Ming Chinese school, which dates back to the early 1920s. You can’t miss it, what with its bright pink facade and traditional upturned roof. 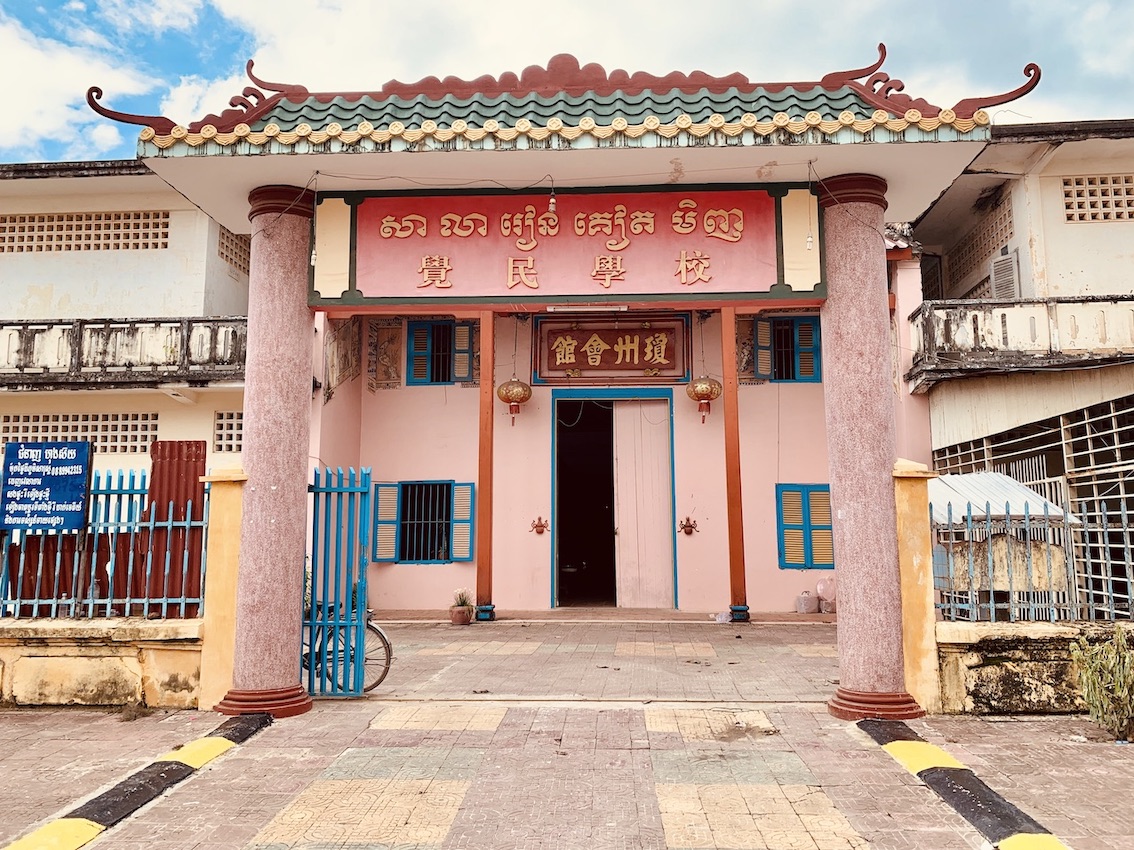 We first heard about the school in an excellent article by the Australian blogger Emily from wander-lush.org. Having spent so many years living in China, I was naturally keen to take a look. In the article, dated November 2019, she mentions that the school is still in use, serving Kampot’s Chinese community. 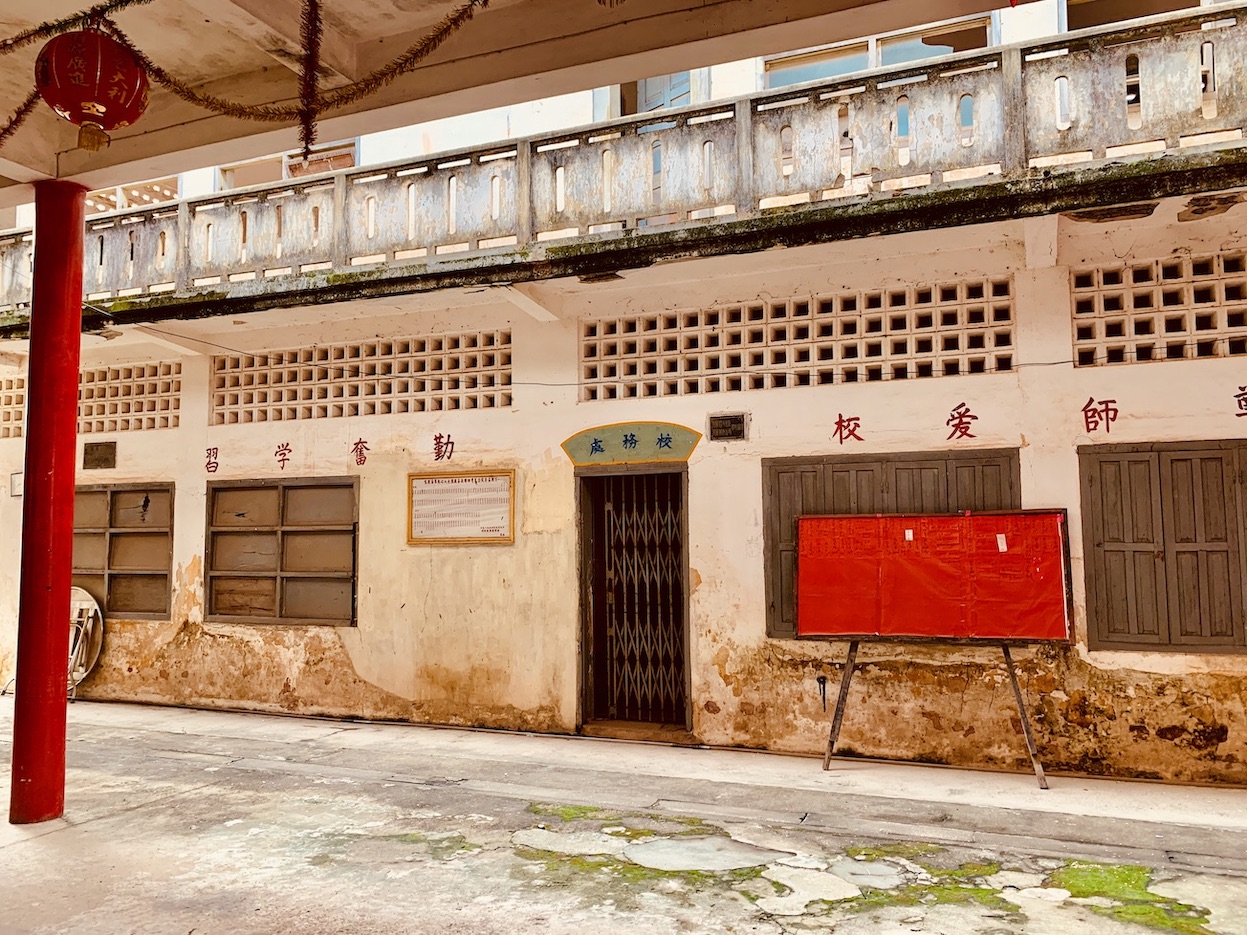 However, when we poked our heads into the main courtyard one afternoon, it was clear the place is now in some considerable state of decay. The classrooms were boarded up, with piles of stacked chairs and tables visible through the grimy windows. It was so quiet we initially didn’t notice the caretaker sat at a desk in the corner. 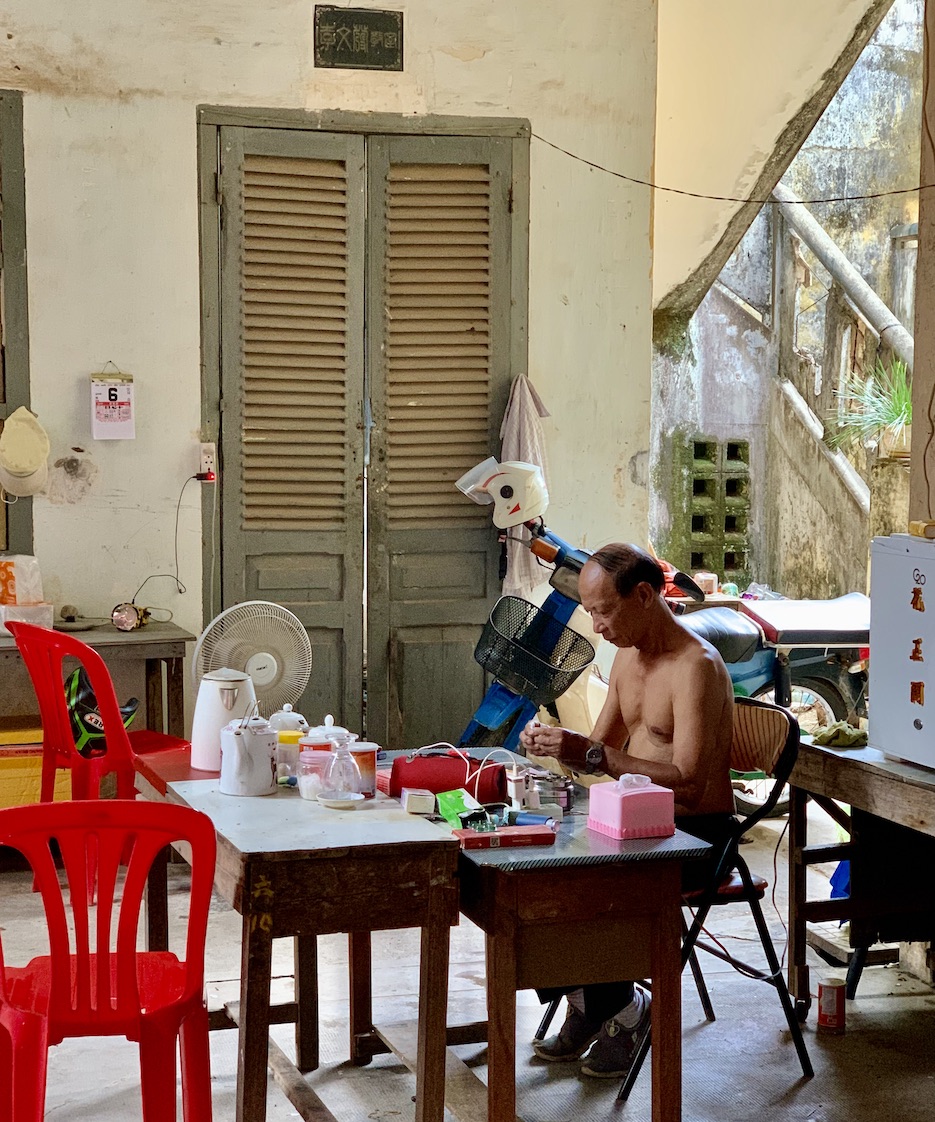 Oh shit, this is probably trespassing, I remember thinking. But Mr. Caretaker simply gave us a nod before returning to the task of clipping his nails. In any case, we figured it was probably best to start making tracks. So we headed outside to see the neglected, overgrown playground. 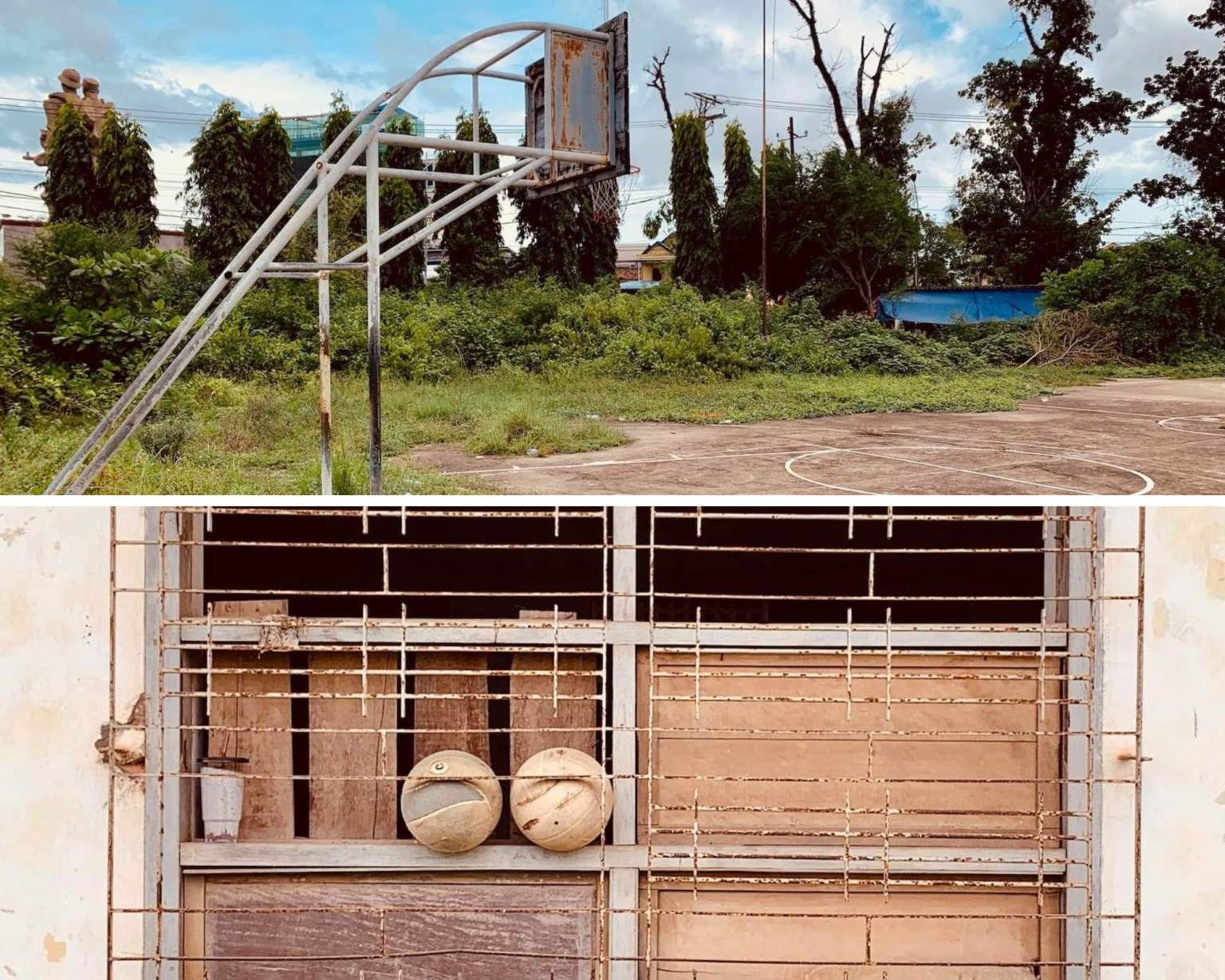 Seems like there hasn’t been much sporting action here for a while. Although, amusingly, there are a couple of volleyballs neatly stored between the bars of a classroom window. Just in case. 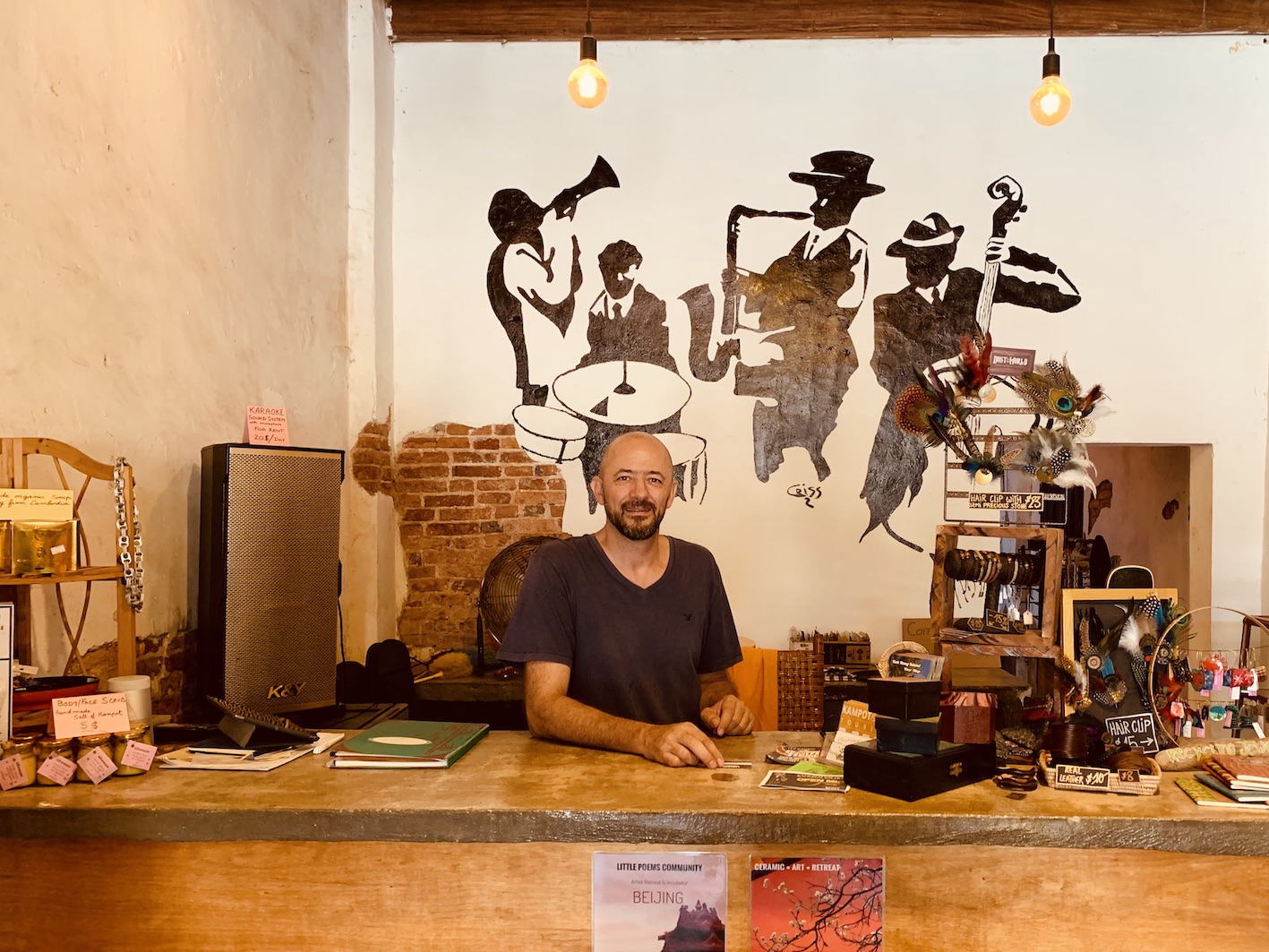 Within the old quarter the scene is almost exclusively dominated by cafes, restaurants and bars. One building that stands out is No Strings Attached, a music shop on Street 703. We wandered in one day and got a warm welcome from Patrick, one of the store’s French co-owners. 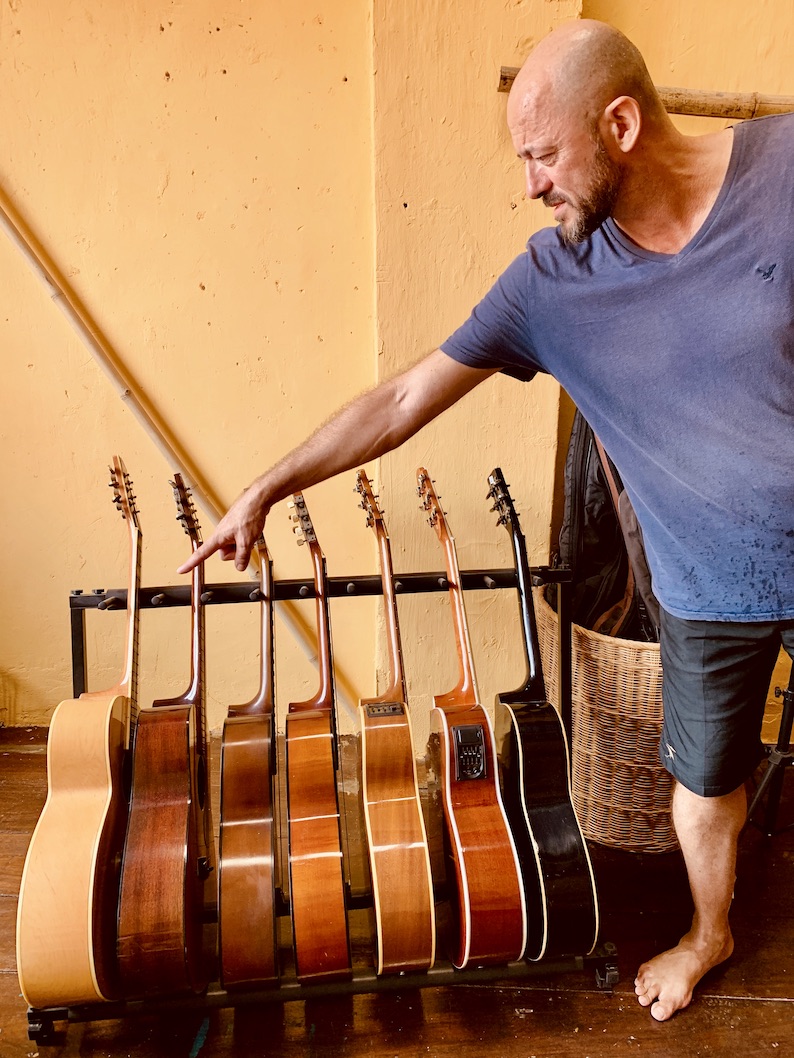 A talented saxophonist since childhood, Patrick left a background in business to come to manage a music store in “this dynamic little town in Cambodia”.

In addition to selling a wide range of musical instruments and accessories, No Strings does repairs and offers music classes through their network of professional musicians. Patrick’s business partner Max meanwhile, “the guitar expert”, is in a local band, Trousers Down, that plays live shows across town. 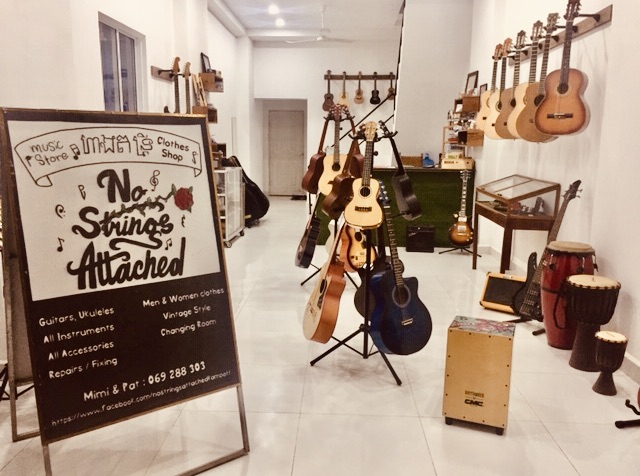