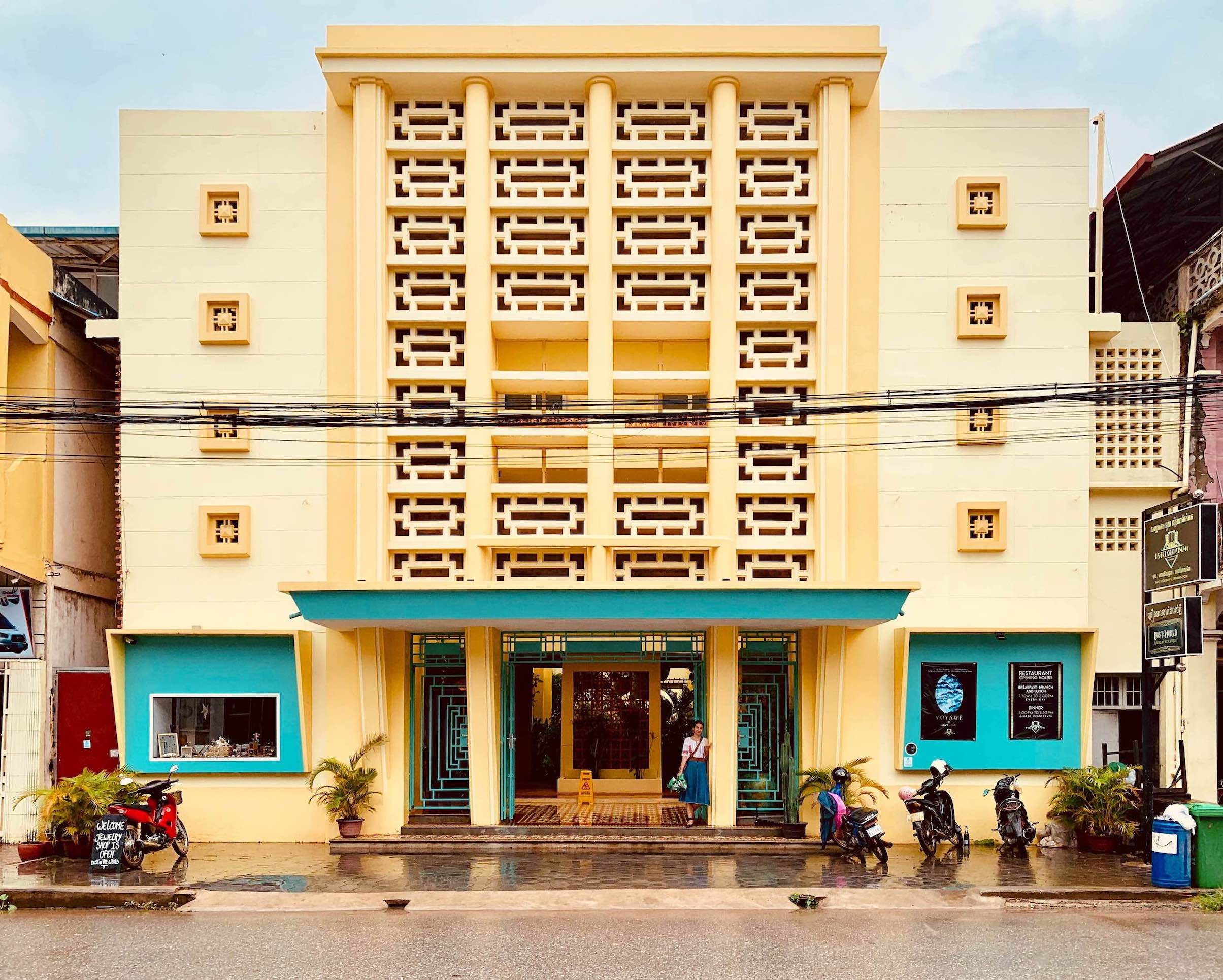 August 2020. Of all the places Sladja and I dined at during our time in Kampot, nowhere could match the charm and atmosphere of Hotel Old Cinema. Dating back to the 1930s, the building began life as a Chinese theatre called Maison de theatre le grandeur. During its golden years, they put on live theatre performances from a grand stage and later specialised in screenings of Kung Fu movies.

After the brutal Khmer Rouge regime fell in 1979, the building was relaunched as 7 Makara Cinema. Its name referenced the 7th of January 1979 when The Vietnamese Army seized control of Phnom Penh, overthrowing Pol Pot and his murderous men. 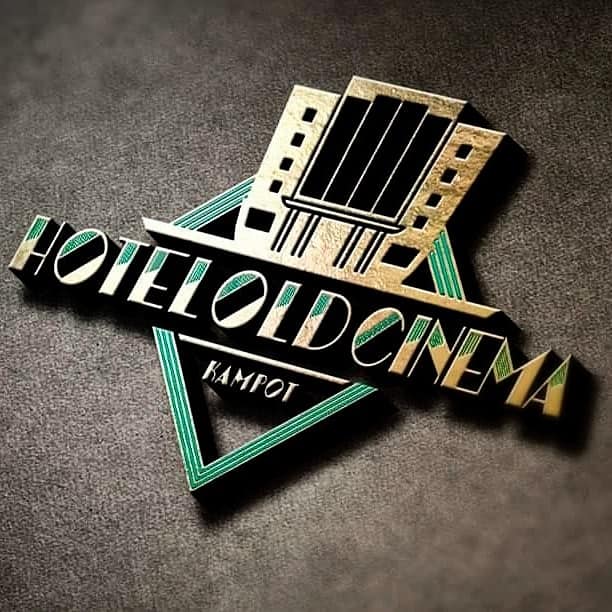 By 2011 it had fallen into disrepair again and for decades it sat abandoned. Fortunately, its arresting yellow and turquoise facade, complete with original stone columns and breeze blocks, remained largely intact. 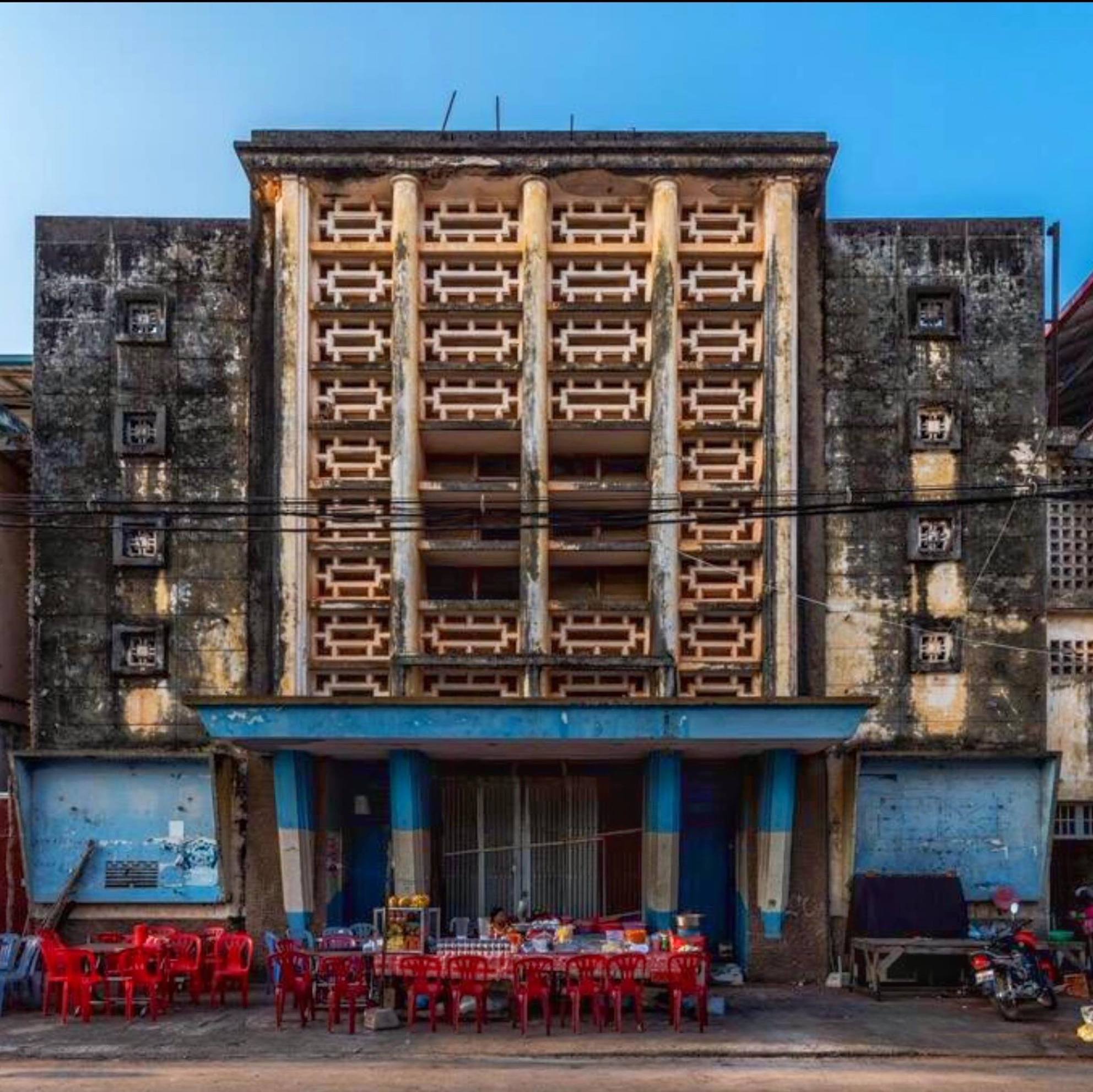 The interior however was a whole different story. In 2016 a French lady, Pauline, and her Dutch husband Bas bought the place with the intention of restoring it to its former pomp. The renovation took a painstaking four years. This fascinating video of the interior being gutted leaves you in no doubt as to what a huge project it must have been.

“All we had left were the four outside walls. The rest was an empty canvas”, explained Bas. With Bas’ background in construction and Pauline’s experience in art and hospitality, it’s perhaps no surprise that they’ve done such a sterling job.

Indeed from the reception area, to the bar, restaurant, swimming pool and rooms, you’ll feel yourself gently tugged back to Cambodia’s old colonial days. 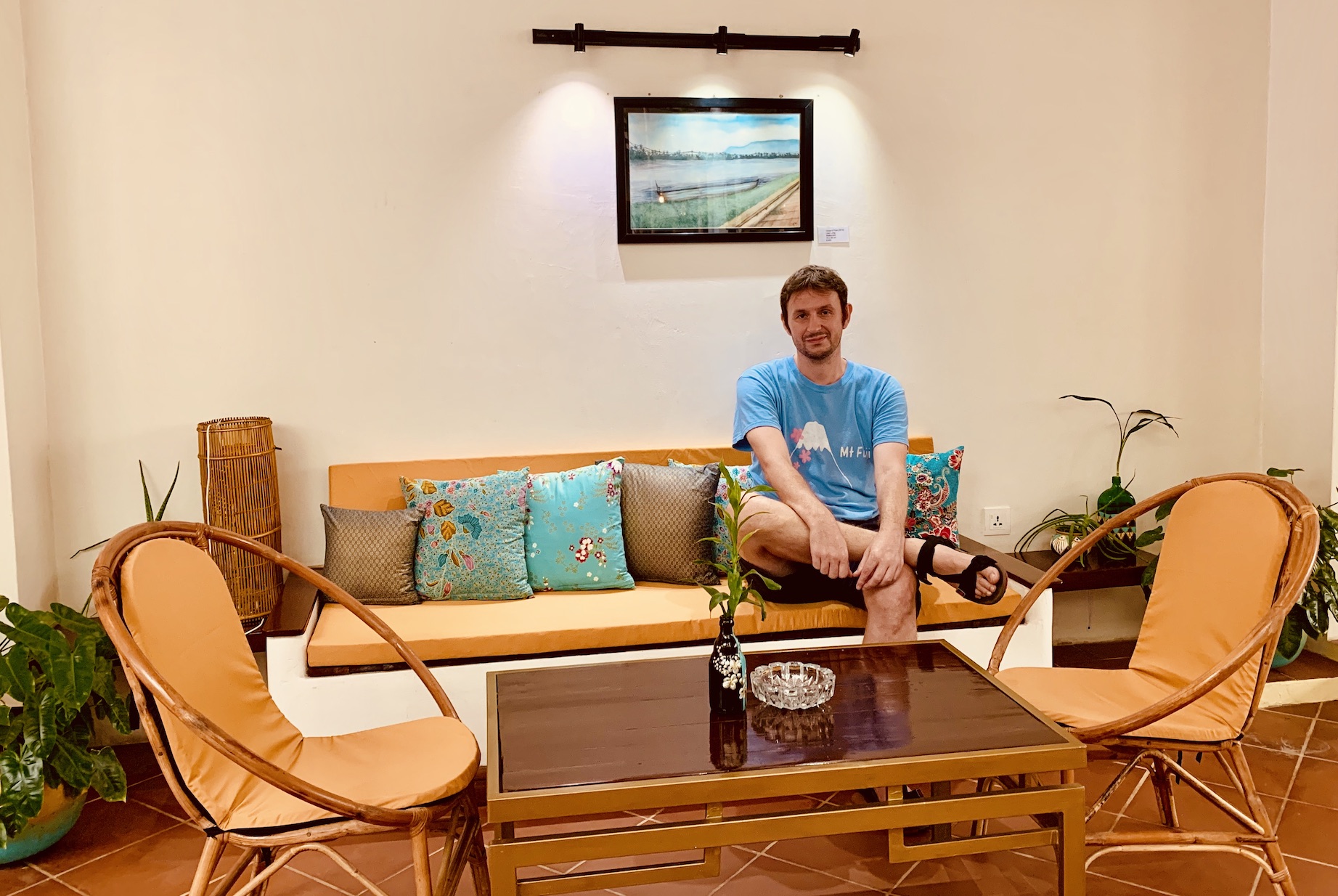 I especially loved how green the interior is, and how two open shafts allow natural light to pour in. It really is like entering someone’s secret courtyard. A Narnia type place that provides quite a transformation from the sweltering, concrete buzz on the other side of the main entrance. 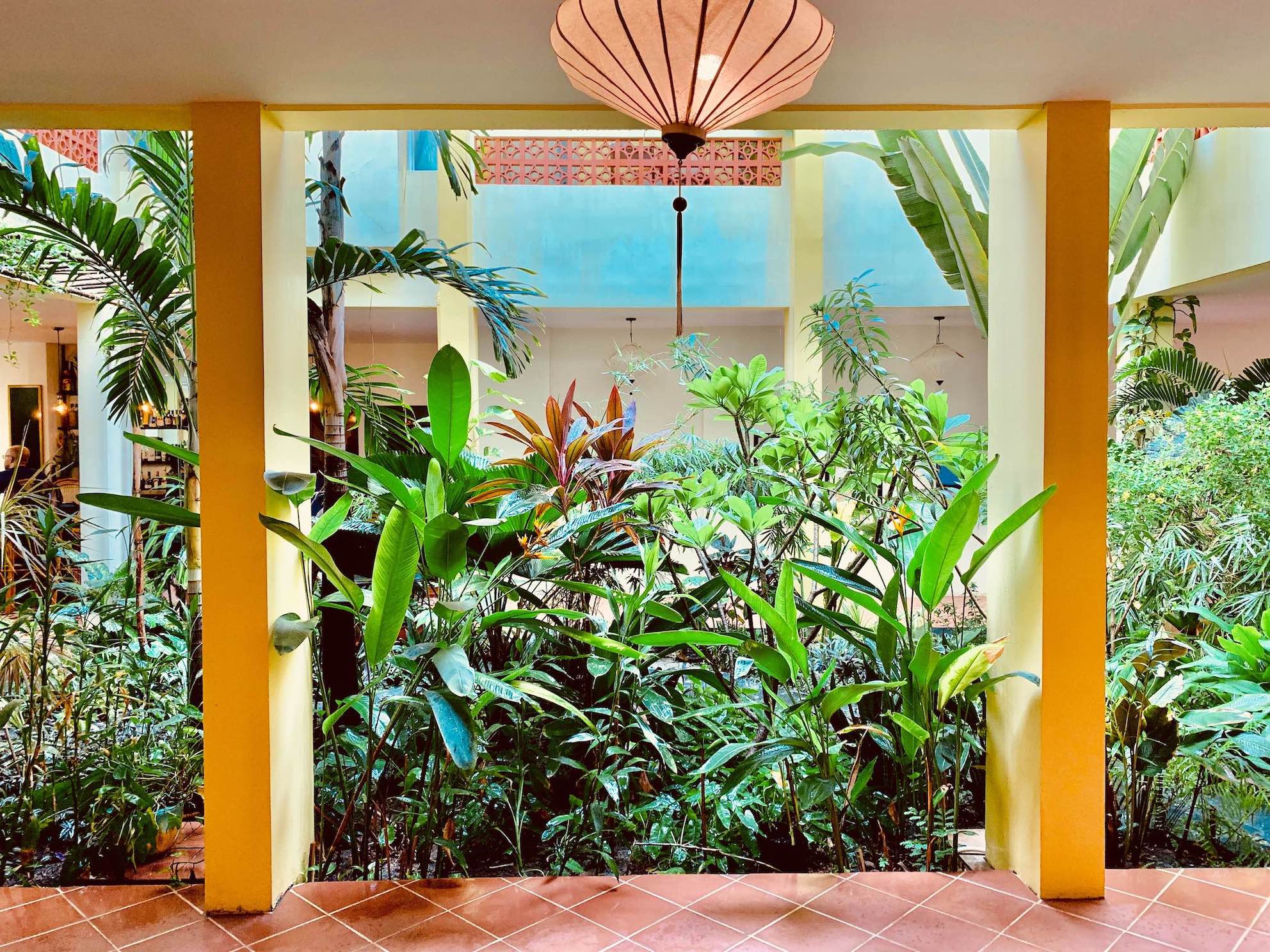 On that first visit Sladja and I had come for breakfast. Hence we grabbed a table and enjoyed the decor over juice and coffee, the latter served in a lovely, retro French press. Check out the stunning ceramic tiles on the floor, when Pauline arrived nearly all the tiles were completely destroyed. 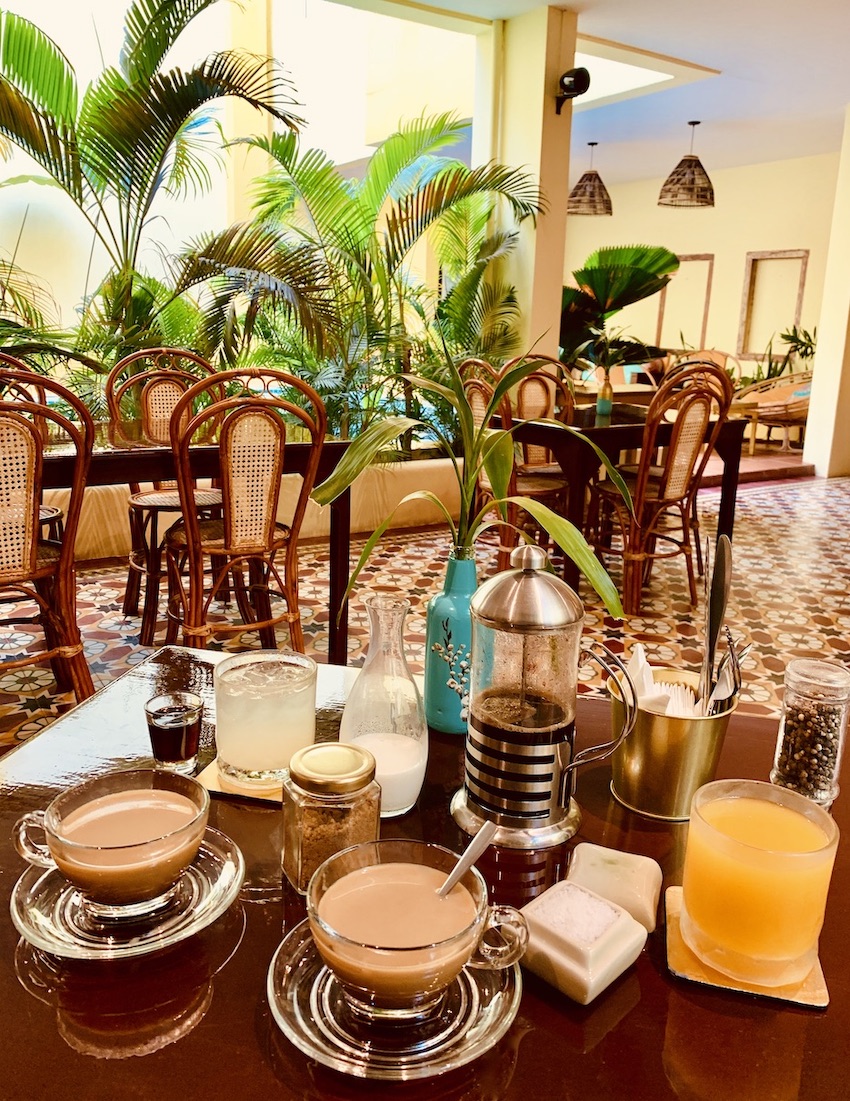 However, the team managed to find a few that were in reasonable shape. From these, they were able to have a whole new set repressed by a specialist in Siem Reap. It’s this dedication to bringing back the vibe of the original building that makes Hotel Old Cinema such a special place. 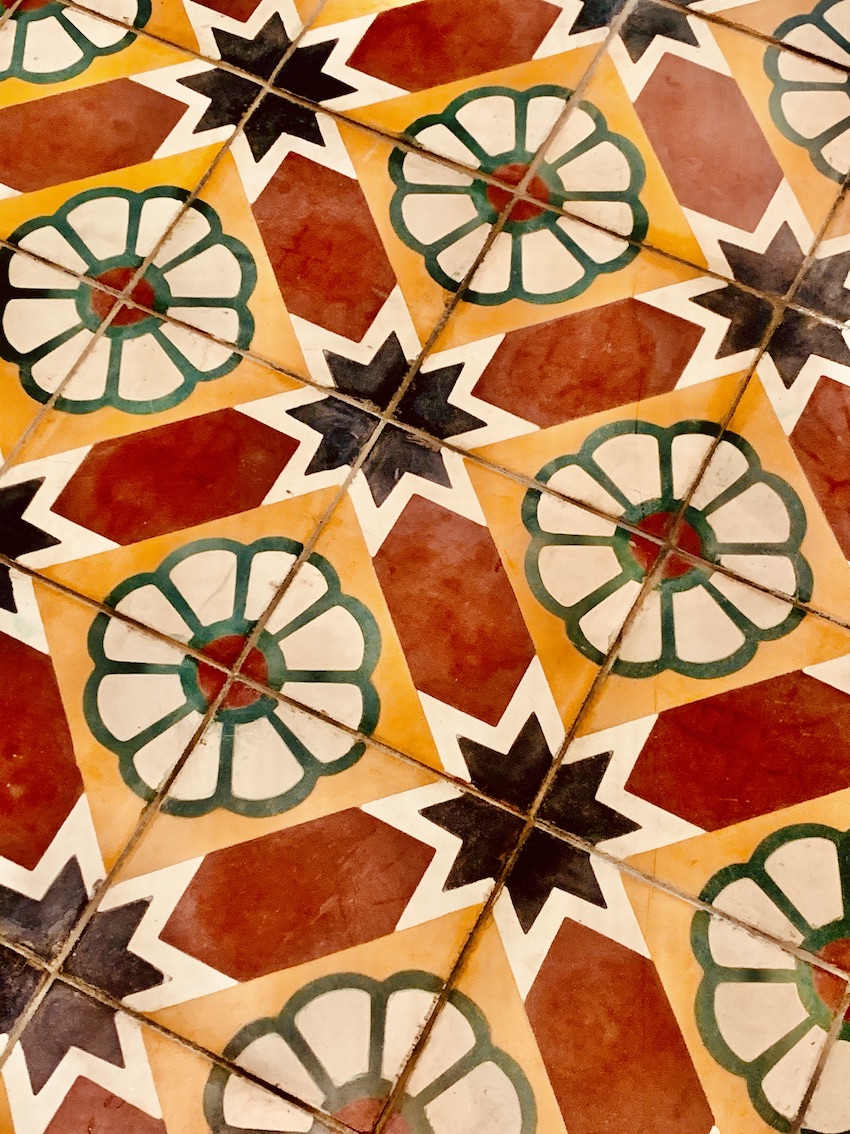 As for the food, this was certainly the most delicious breakfast we had in Kampot. I went for the set simply titled Full. You get two fluffy pancakes, a bowl of scrambled egg, streaky bacon and grilled tomatoes. And yeah, there’s fresh bread with little tasting trays of butter, jam and honey. 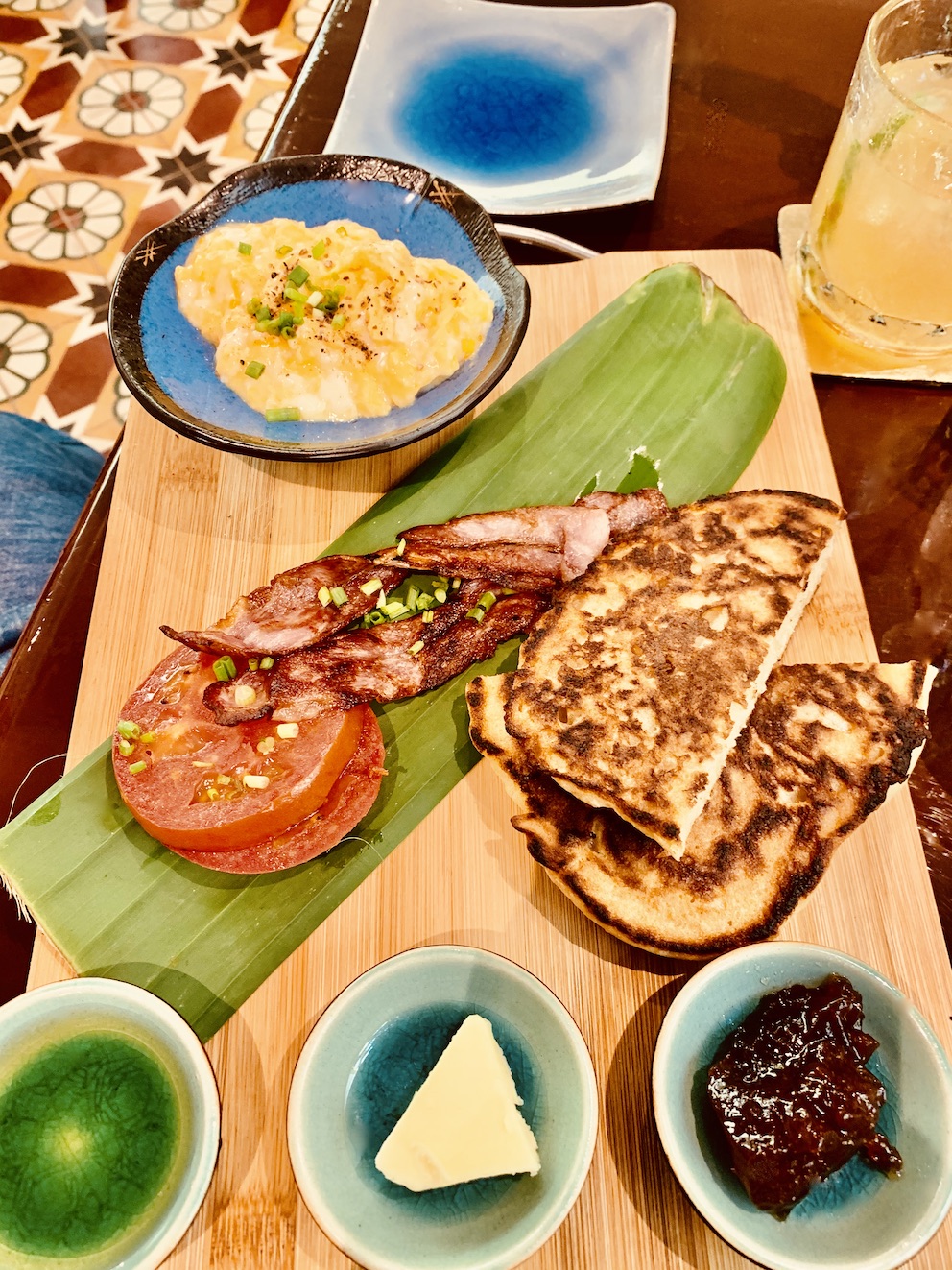 Sladja chose the Continental set. This one features an overflowing bowl of fresh fruit, including passion fruit, watermelon, mango and dragon fruit. There’s also a glass of yoghurt, a fresh bread roll and a mini croissant and pain au chocolat. And another round of butter, jam and honey.

Hats off to the breakfast chef, Srey Moath, a local woman who is so famed for her balance of quality and speed, Pauline and Bas call her “The breakfast ninja”. 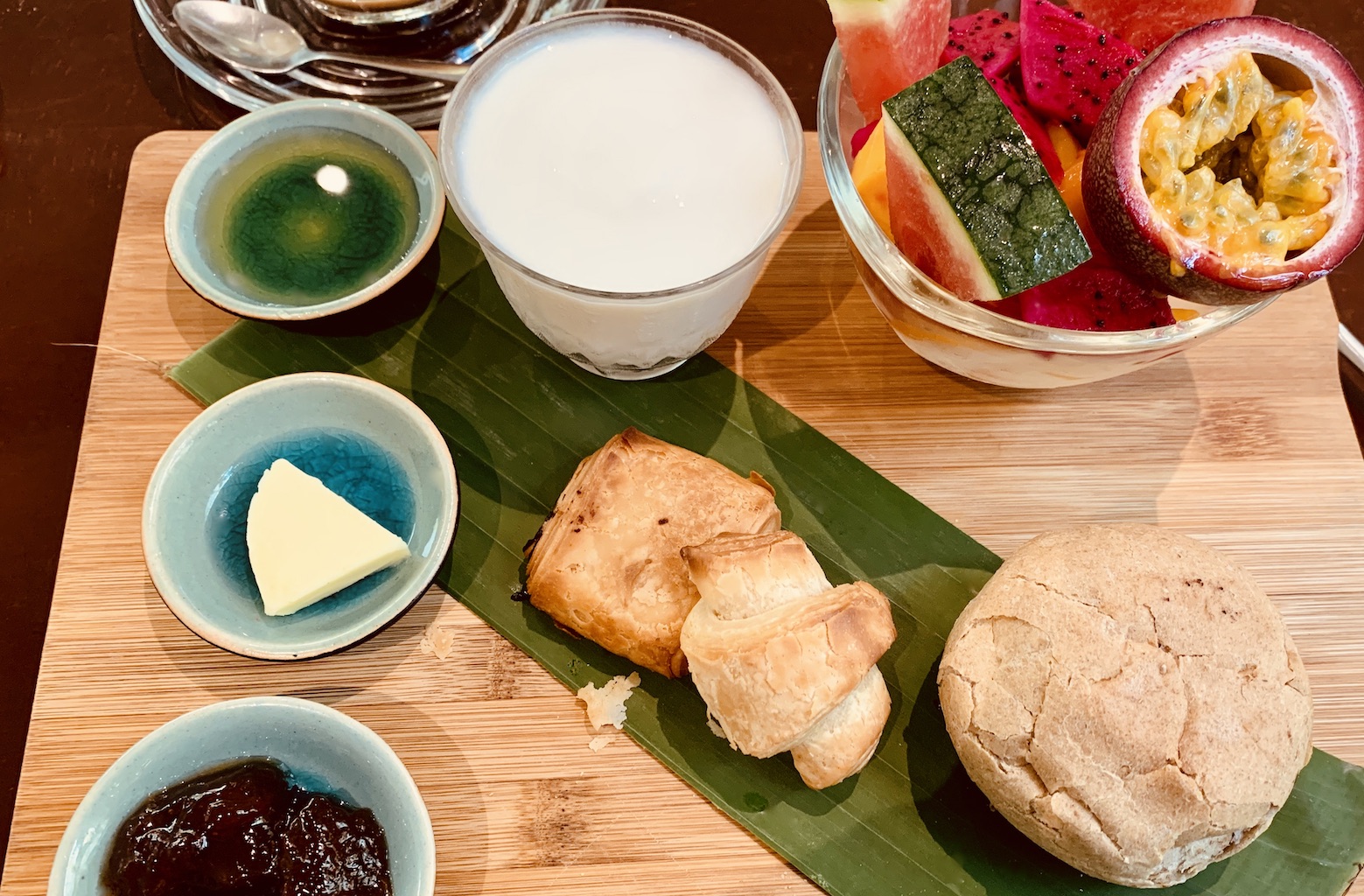 Hotel Cinema has eight rooms, four on each side of the sweeping interior courtyard. The decor is wonderful, a devoted tribute to the artistic stylings of Cambodia’s 1950s Art Deco era. 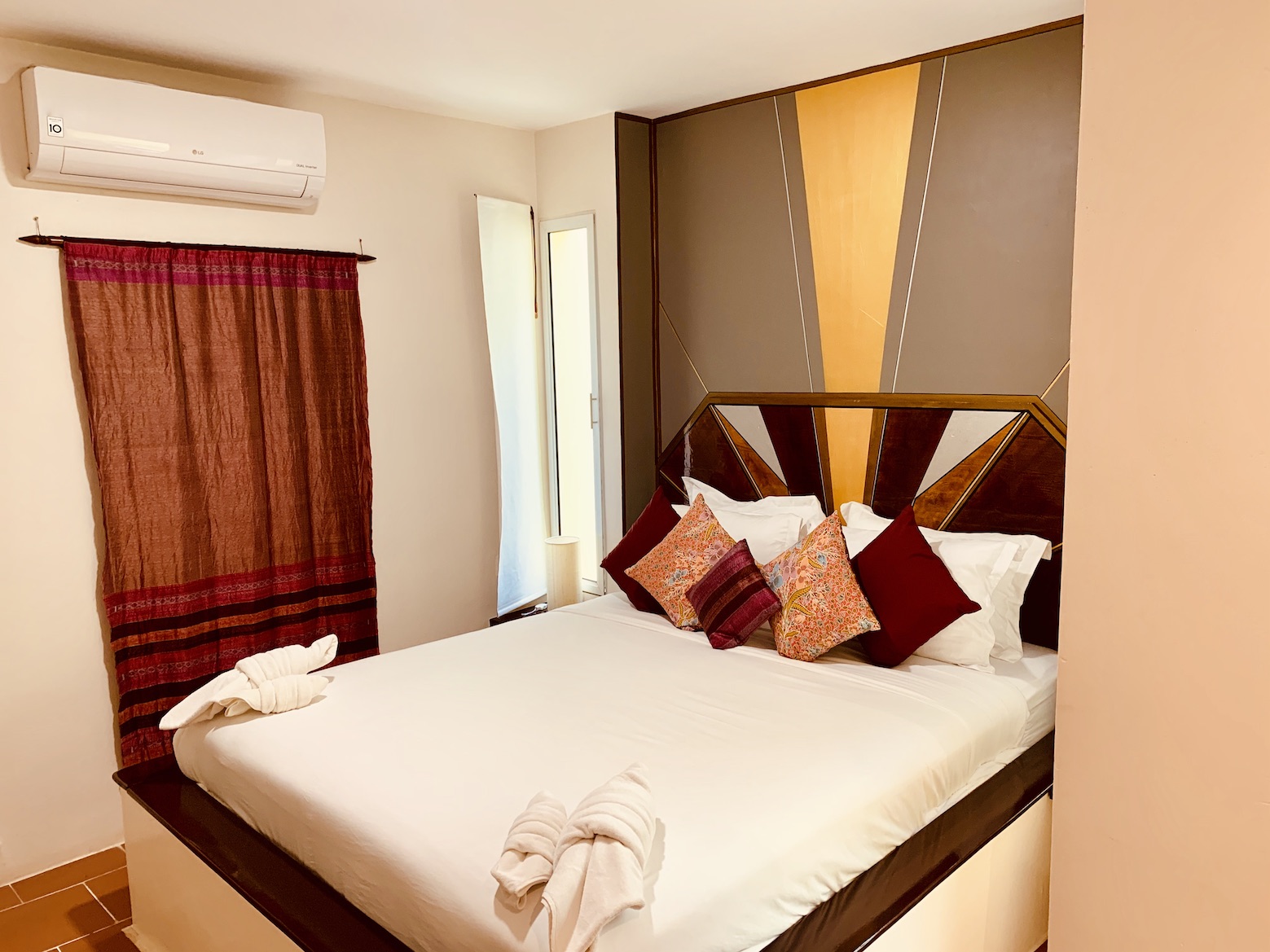 You can see it on the bed heads, with their symmetrical shapes bringing to mind Baz Luhrman’s movie adaptation of The Great Gatsby. It’s also there on the wood inlay doors with their diamonds and triangles. Everything, I should add, designed by Pauline herself. 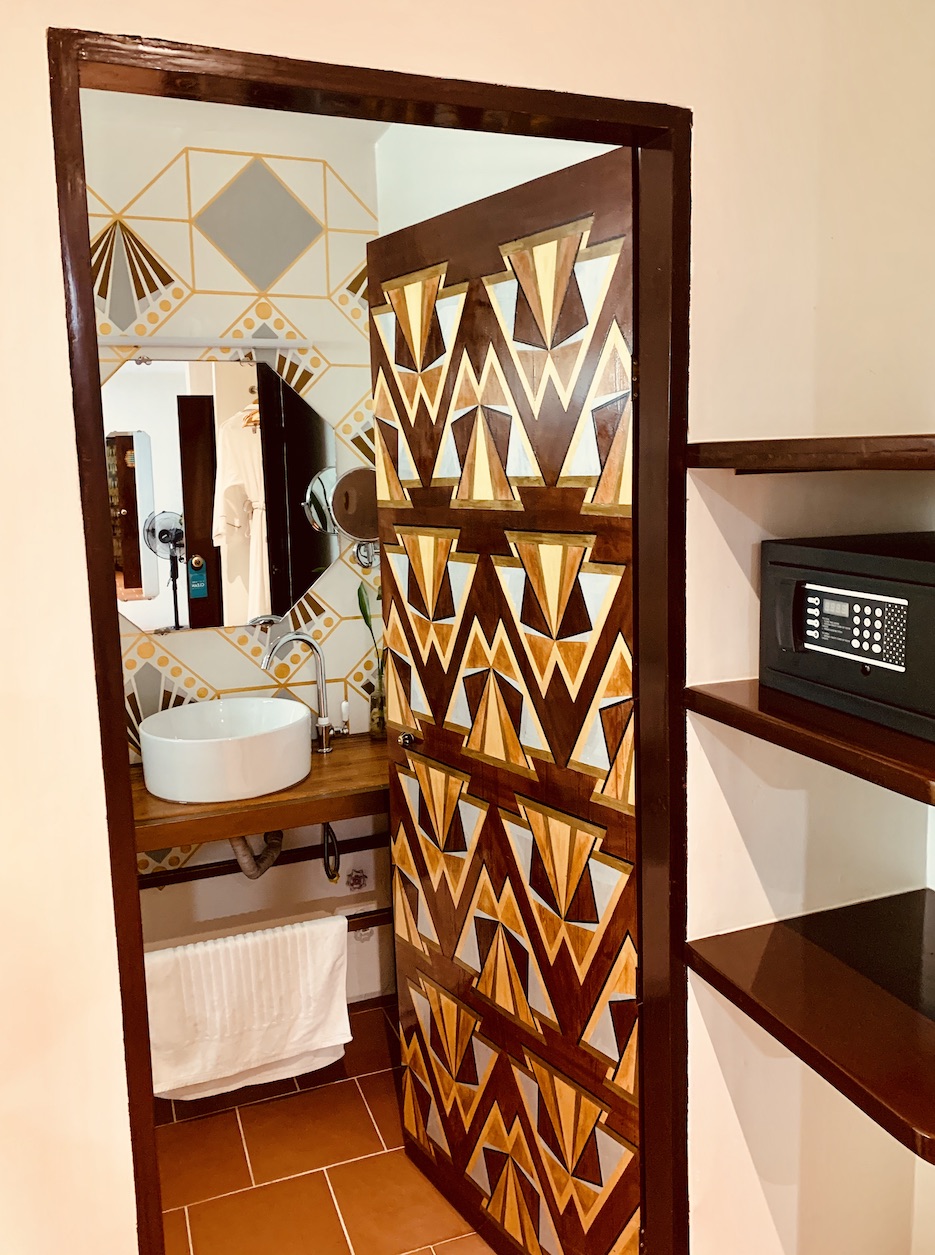 Each suite comes with its own private balcony, where one can sit listening to the birds flitting between the branches in the open shafts. Notice the balcony coffee table, where the tile motif has been reproduced. Street 700, a consistent hum of cars, motos and tuk tuks, lies just a few metres away, though you’d never know it. 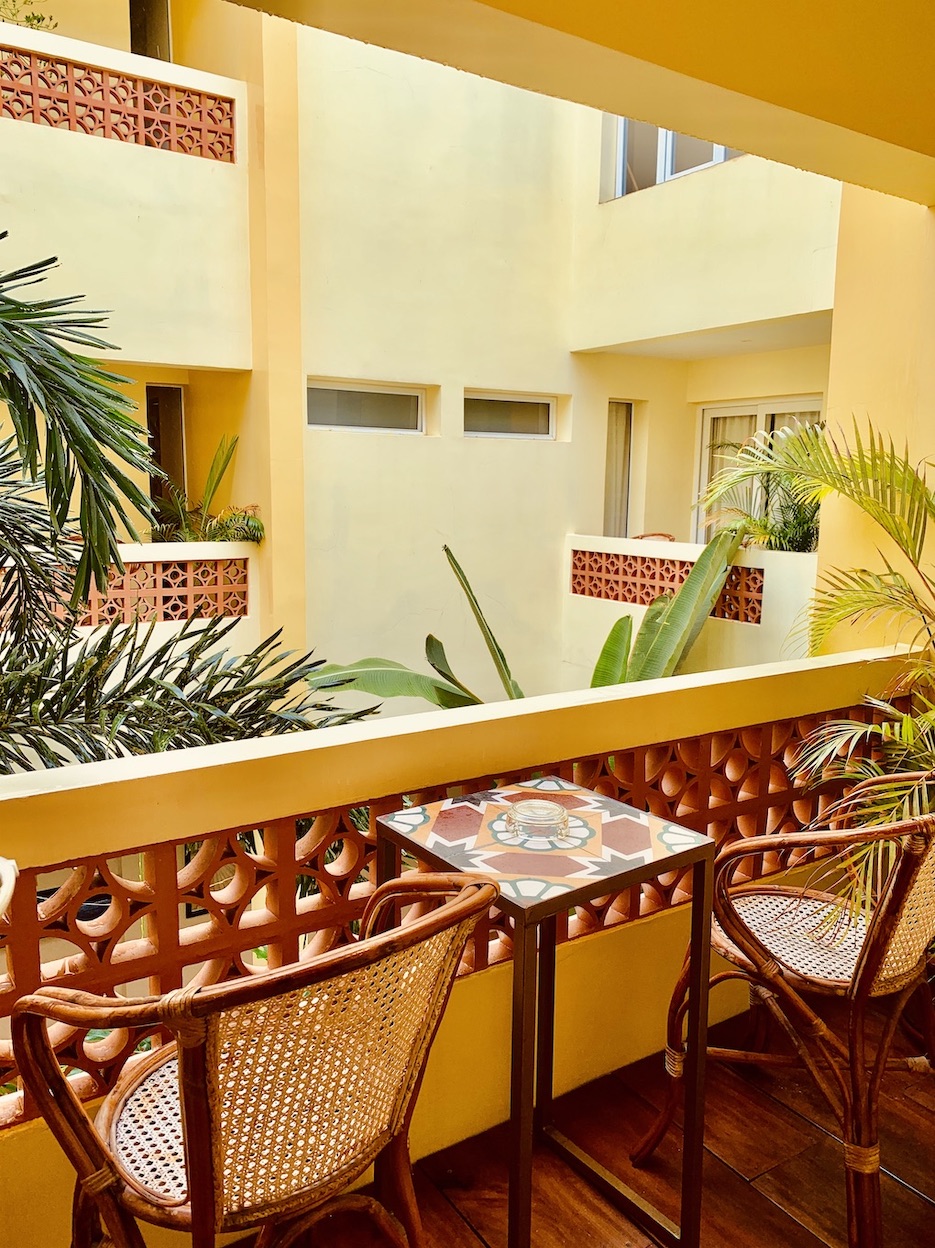 On our second visit, we arrived mid afternoon to sample one of Hotel Cinema’s famed tapas platters. That day we met a local woman, Pau, who works on the team. For her, this isn’t what you would call a typical waitressing job. This is due to the fact that her father worked in the actual 7 Makara Cinema as a projectionist! 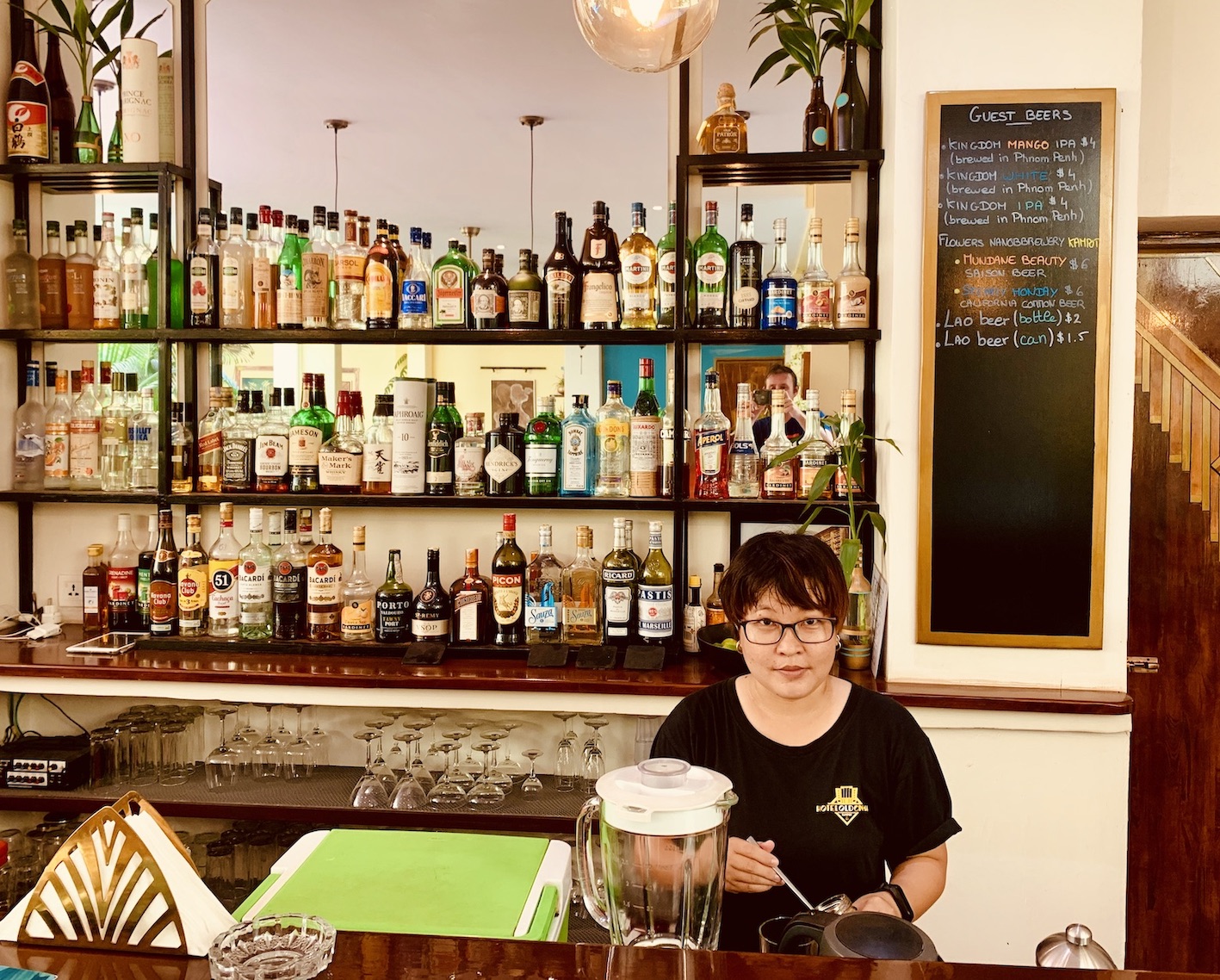 We thought this was a lovely story and further testament to how much care and attention has gone into nurturing the spirit of the place.

Furthermore, our tapas dinner turned out to be every bit as successful as breakfast. There are four platters to choose from and we went for The Kampot mix. What a tantalising and thoughtful array of bites, including caramelised pork, green mango salad, lemongrass chicken, beef skewers and crab meat balls. 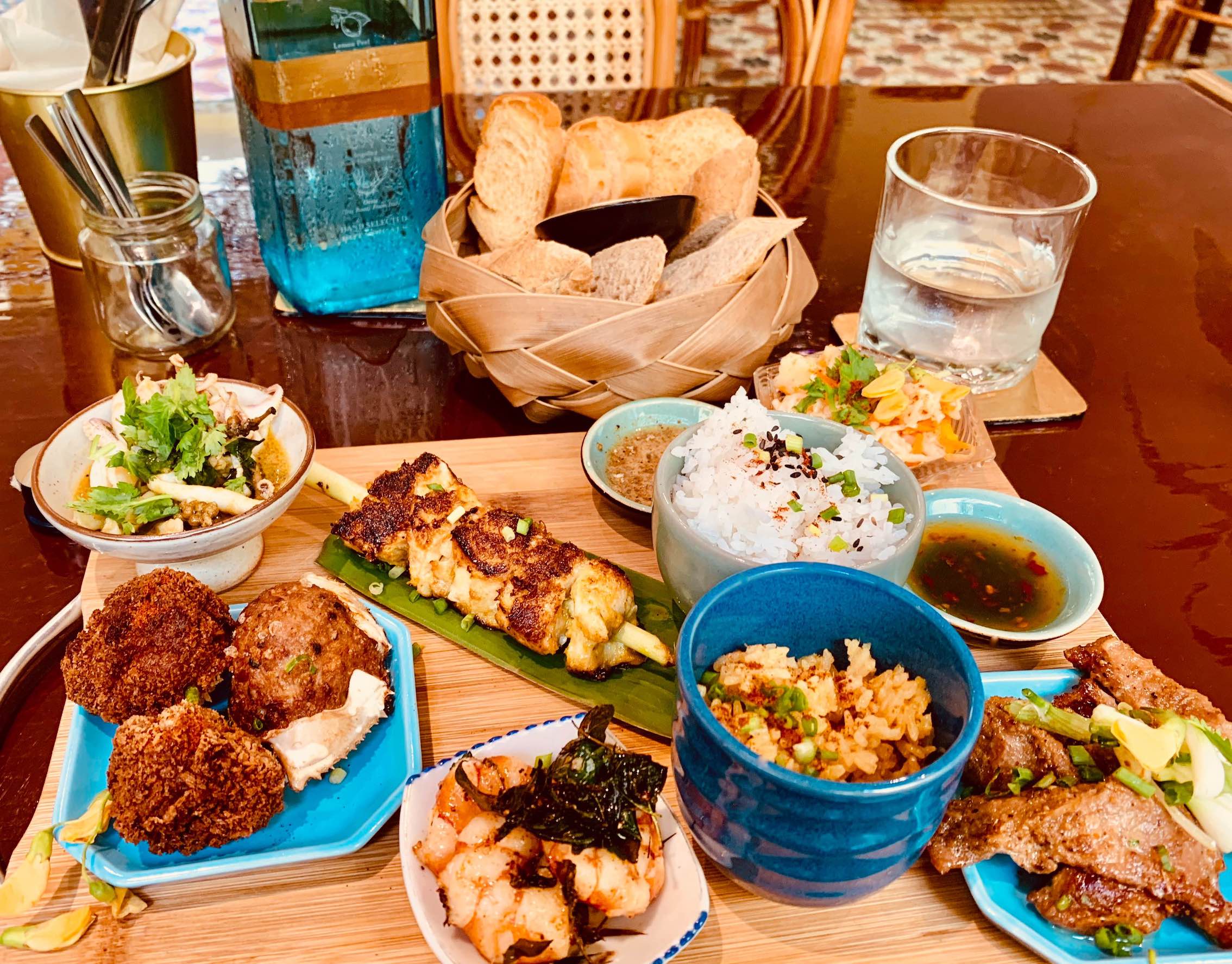 Happily, our food order entitled us to a swim in the pool, which is of course impeccably maintained. The perfect end to a relaxing afternoon out of the fierce Kampot sun. 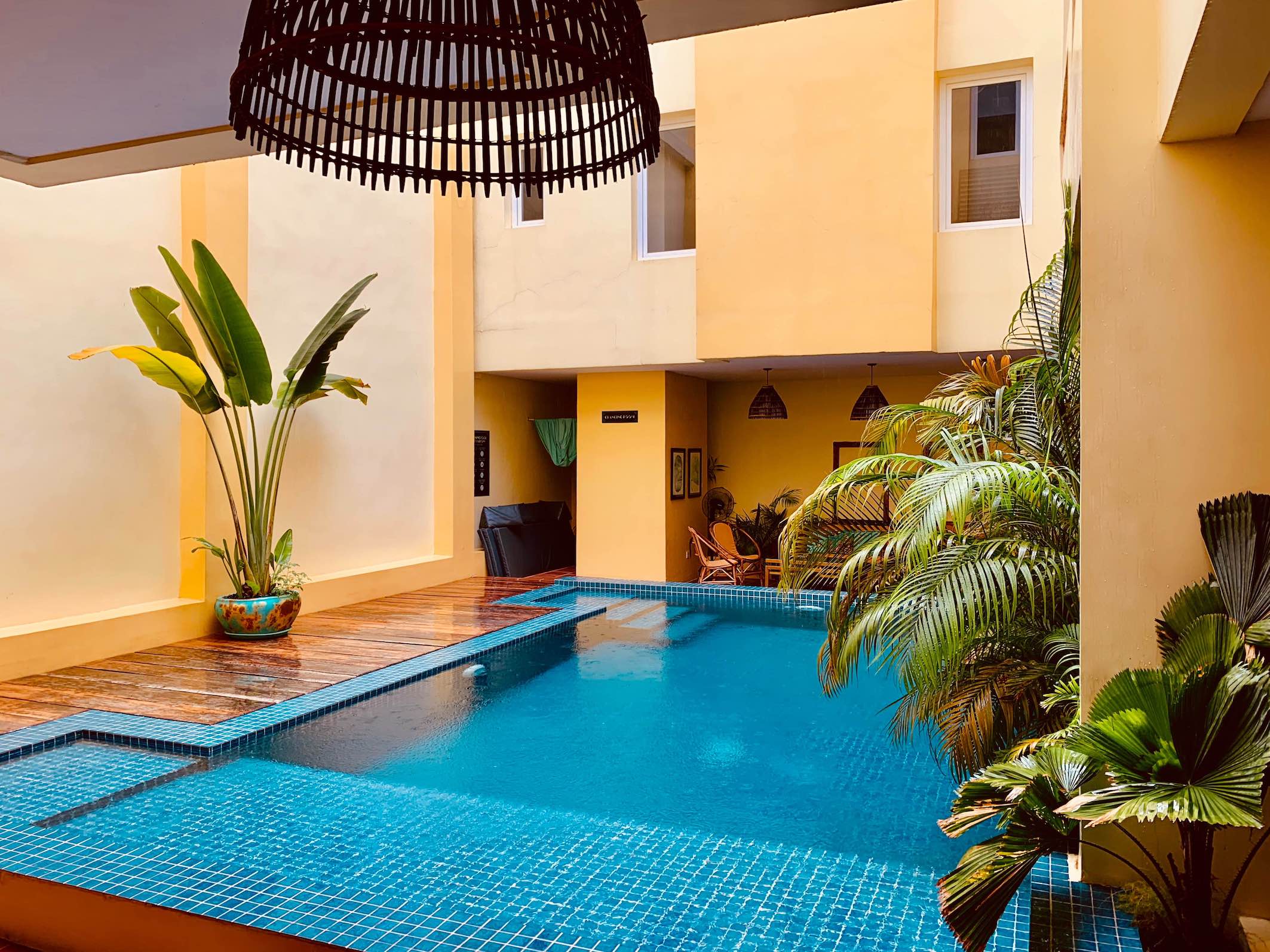 Despite creating one of the great independent hotels of South East Asia, Pauline and Bas are hardly resting on their laurels. In January 2021 they closed for a month in order to make the space “bigger, brighter and more beautiful”.

What’s more, there are even plans to incorporate an area for movie screenings. Now that would be the icing on the cake! Interested in visiting Hotel Old Cinema? Get in touch with the team through their Facebook page. 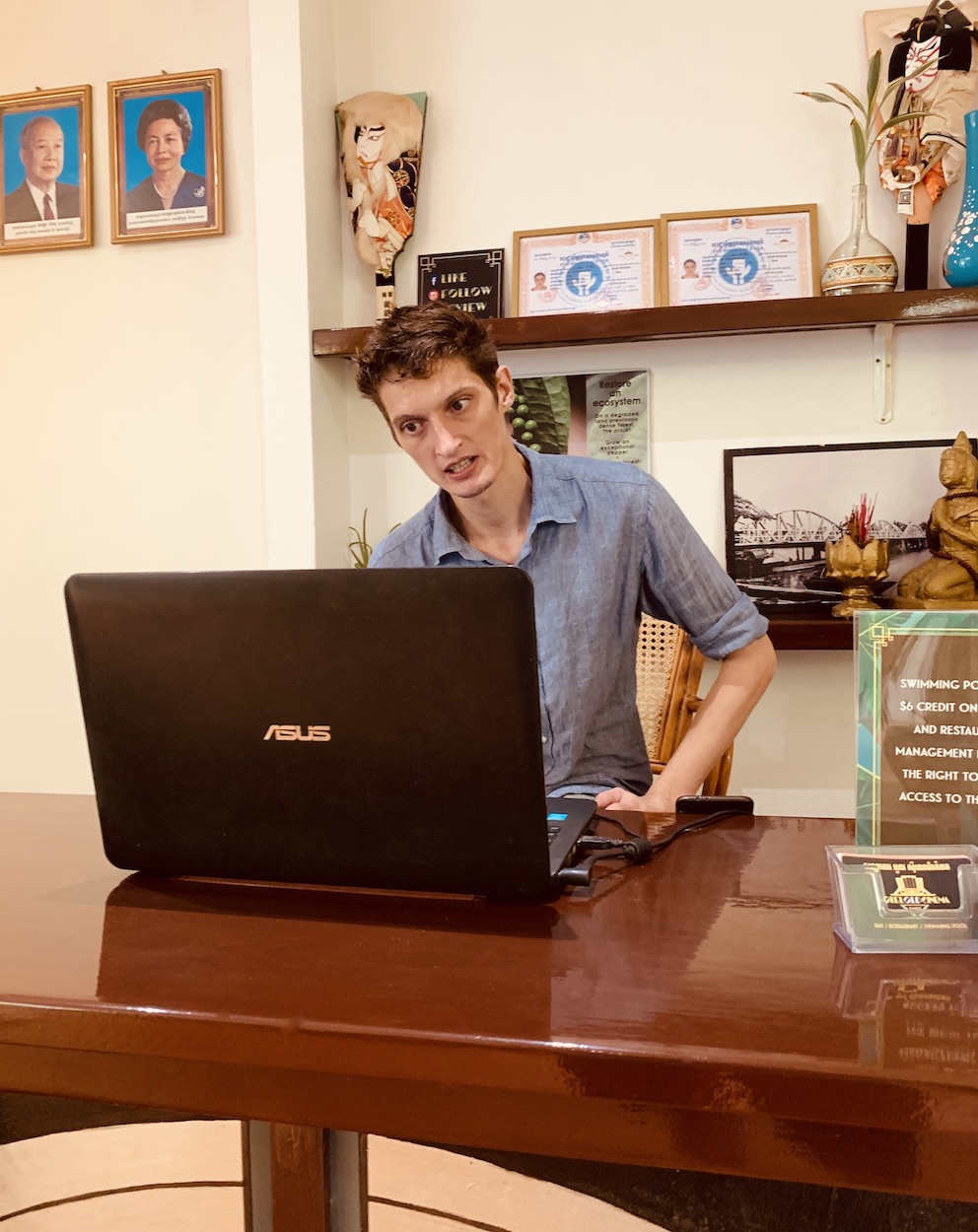 Check in at Hotel Old Cinema.