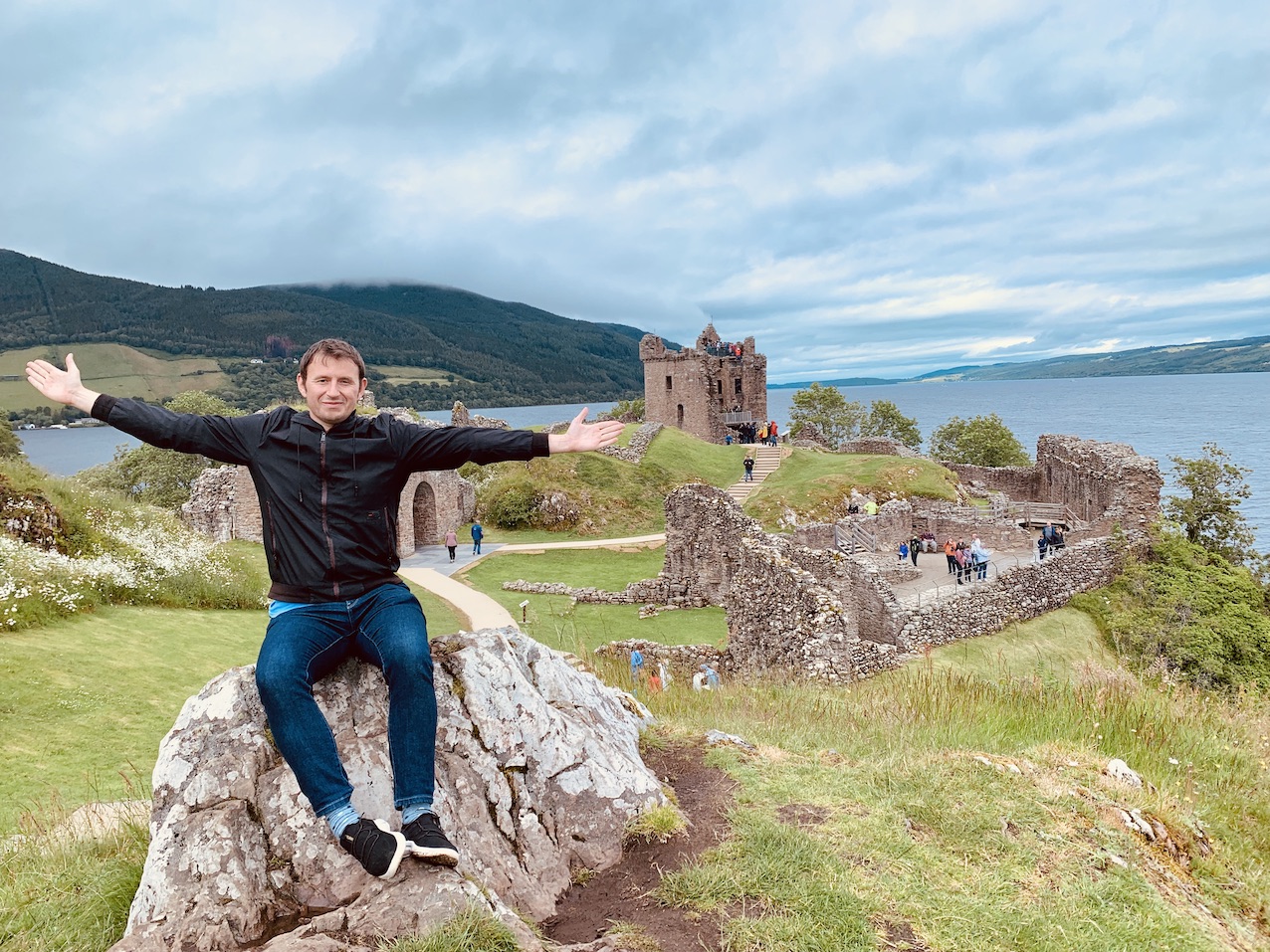 July 2019. Located atop a dramatic peninsula two miles southeast of Drumnadrochit Village, Urquhart Castle stands as the most dramatic spot of all to enjoy the majesty of Loch Ness. For years I had wanted to visit Urquhart Castle. Finally, on a moody overcast summer’s afternoon in 2019, I took my chance. 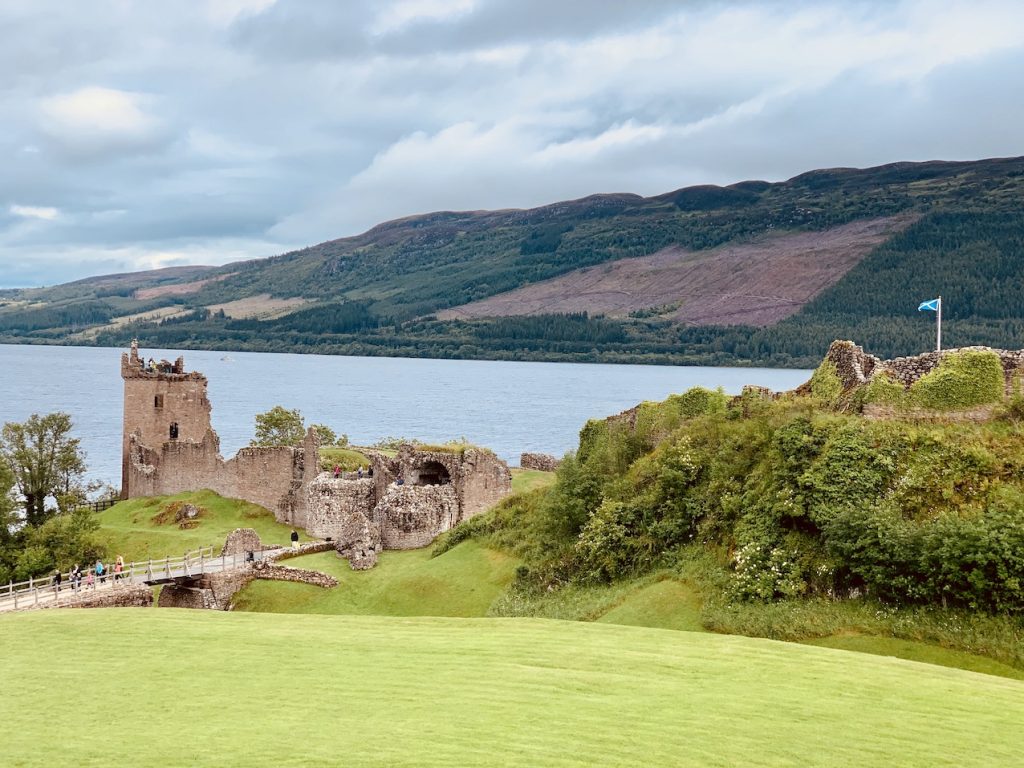 As if the staggering natural beauty here isn’t enough, Urquhart Castle is also one of Scotland’s most historical sights. They say St. Columba came here as early as 562. Legend also has it that he performed a miracle or two by the shoreline before declaring that he sighted a monster of some manner in the loch. 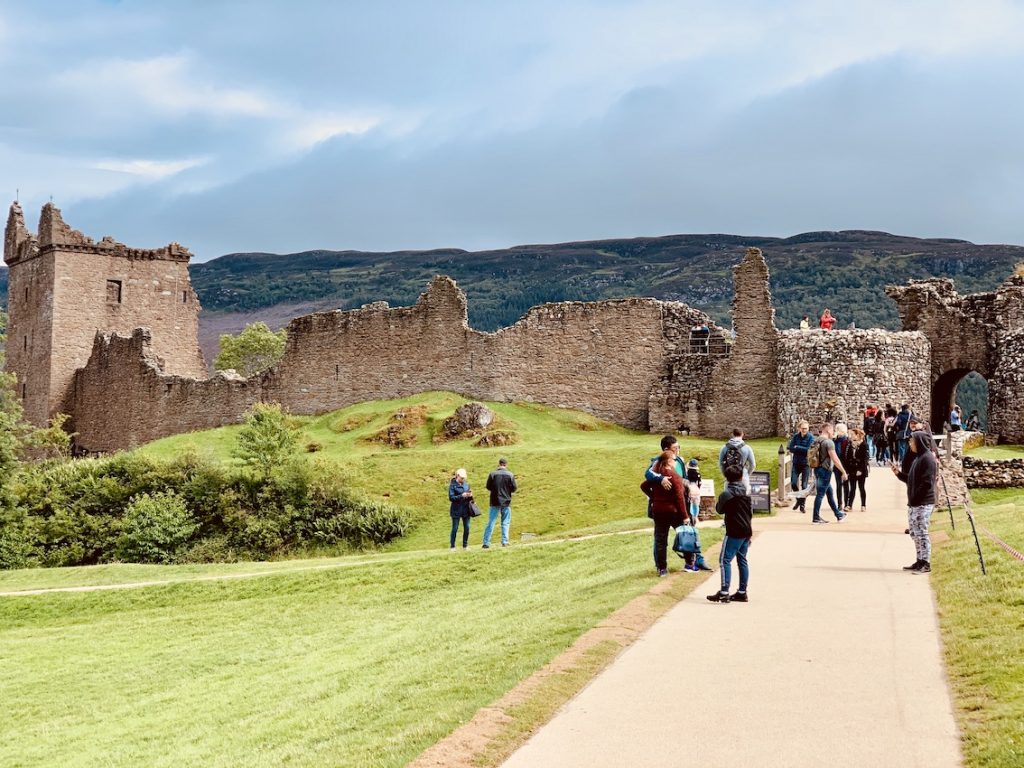 There is some debate over who was actually the first to build a castle here. Some say it was good old William the Lion in the 12th century. Others insist King Alexander II was the first to lay stone in the 1230s, following his crush of a revolt in Moray. Basically, he wanted to set up a strategic stronghold in The Scottish Highlands and thought this was the perfect spot. 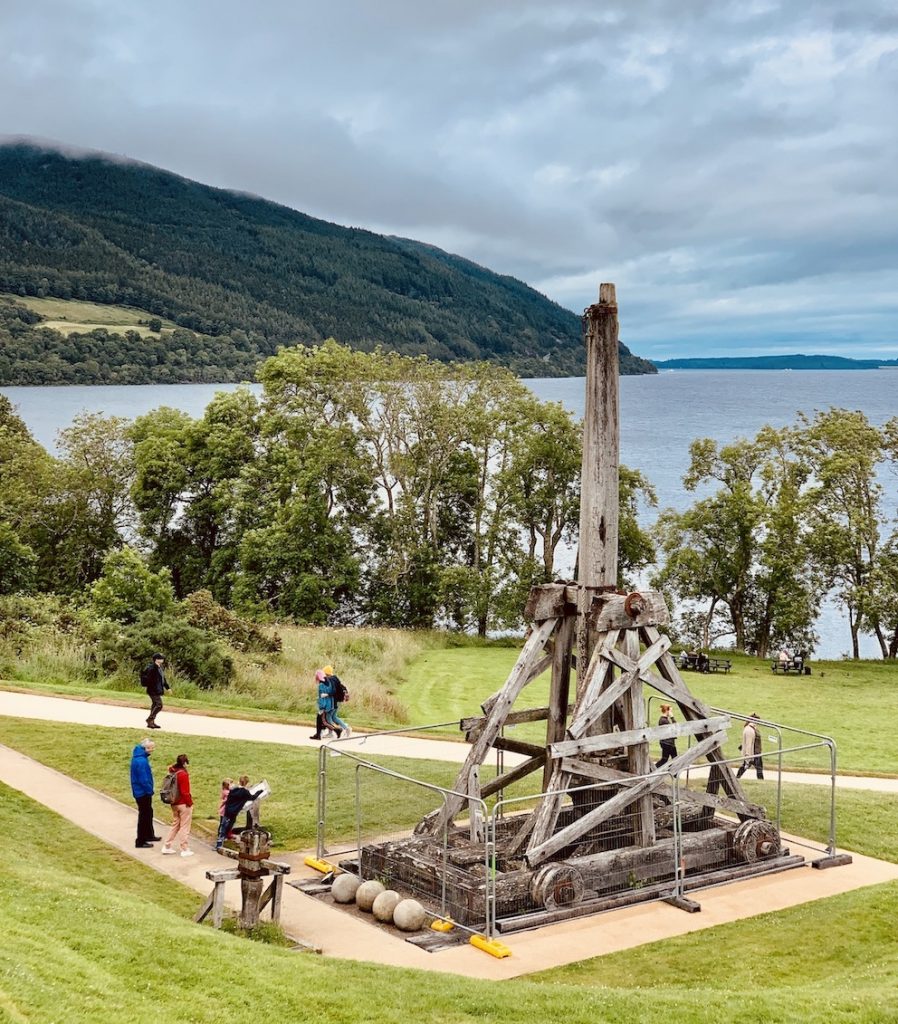 The fearsome Trebuchet at Urquhart Castle.

Alexander II wasn’t the only one who had to worry about Urquhart being laid to siege. The castle found itself under attack countless times, such as during The Wars of Scottish Independence in the 14th century.

Before I reached the castle’s main gate that day, I stopped for a moment to admire this fearsome replica Trebuchet. Attackers would use this beast of a contraption to throw giant stone balls at its enemy. Over the years, twelve such balls have been discovered around Urquhart’s ruins! 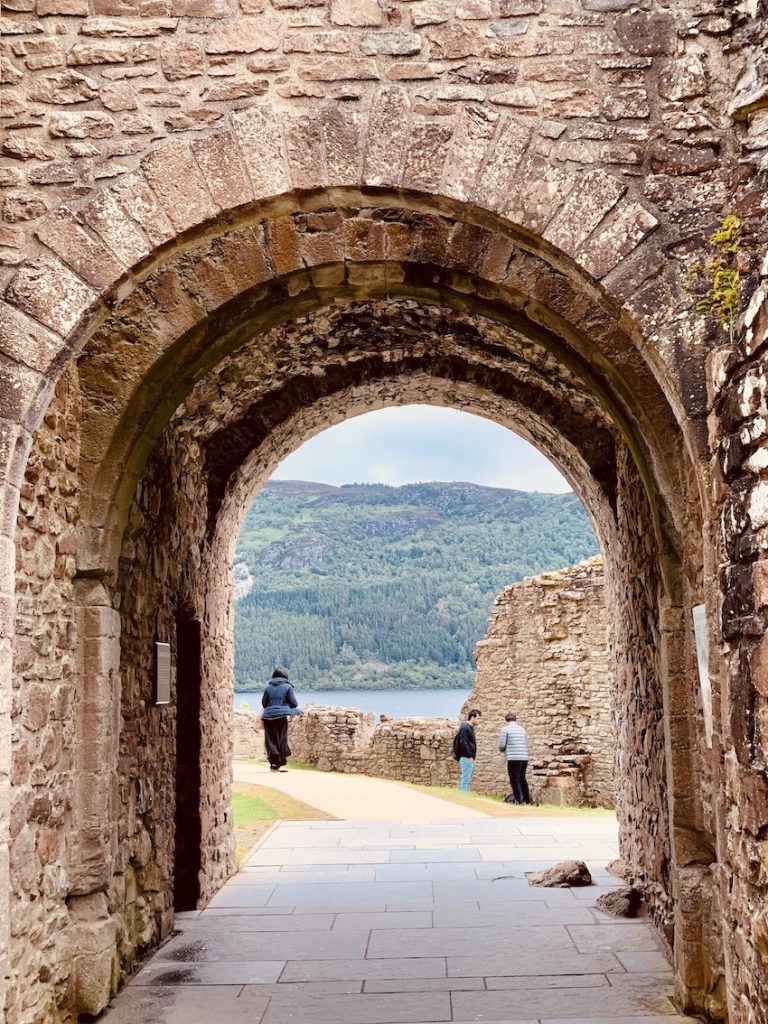 The Gatehouse at Urquhart Castle.

A short distance from the trebuchet lies The Gatehouse, which served as the castle’s main entrance. It was exceptionally well protected back in the day, from its rock-cut ditch and wooden drawbridge, to a massive iron portcullis that dropped down over the main arch. 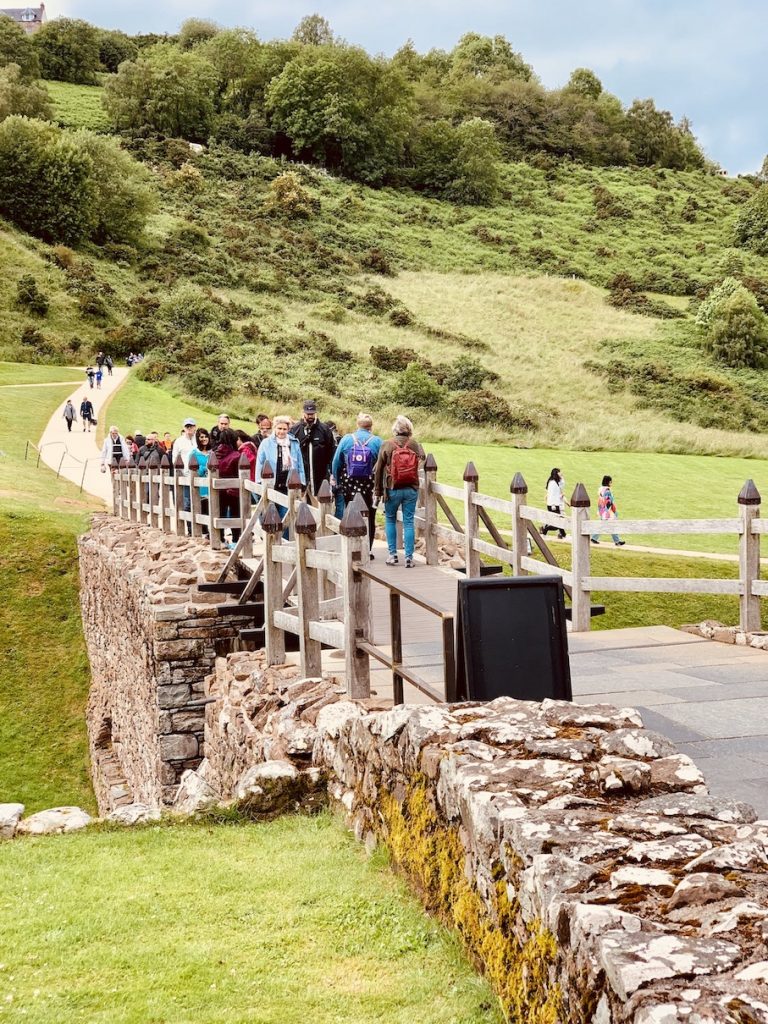 Moreover, if you actually managed to make it this far, someone would likely reward your efforts by dropping rocks and boiling oil on your head from various murder holes in the towers above. 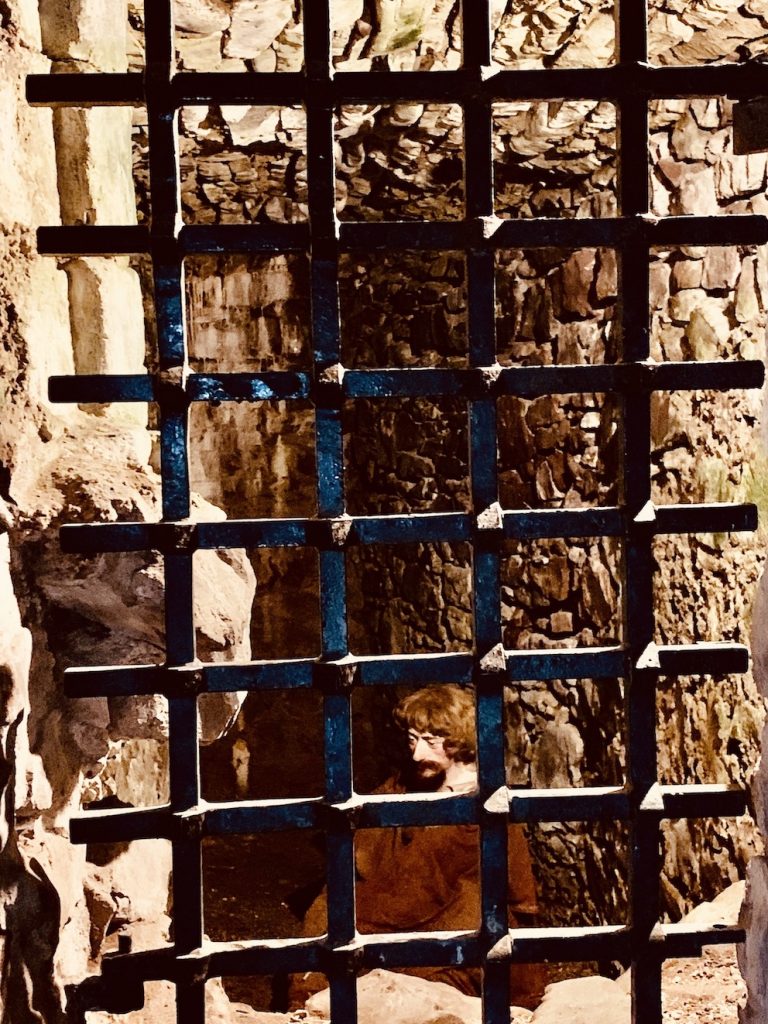 The Prison Cell at Urquhart Castle.

Urquhart may be one of Scotland’s most beautiful castles, but there’s little to smile about at The Prison Cell, a narrow, windowless room that is largely bare except for a small latrine. In the 1600s the famous Gaelic bard Domnhall Donn ended up in the castle prison following accusations of cattle theft. However, his real crime, according to the history books, is that he fell in love with The Laird of Grant’s daughter.

“If they knew I was captive, with no hope of release…”

Donn went on to compose and perform countless songs from his cell at Urquhart Castle before the merciless laird ultimately had him beheaded. 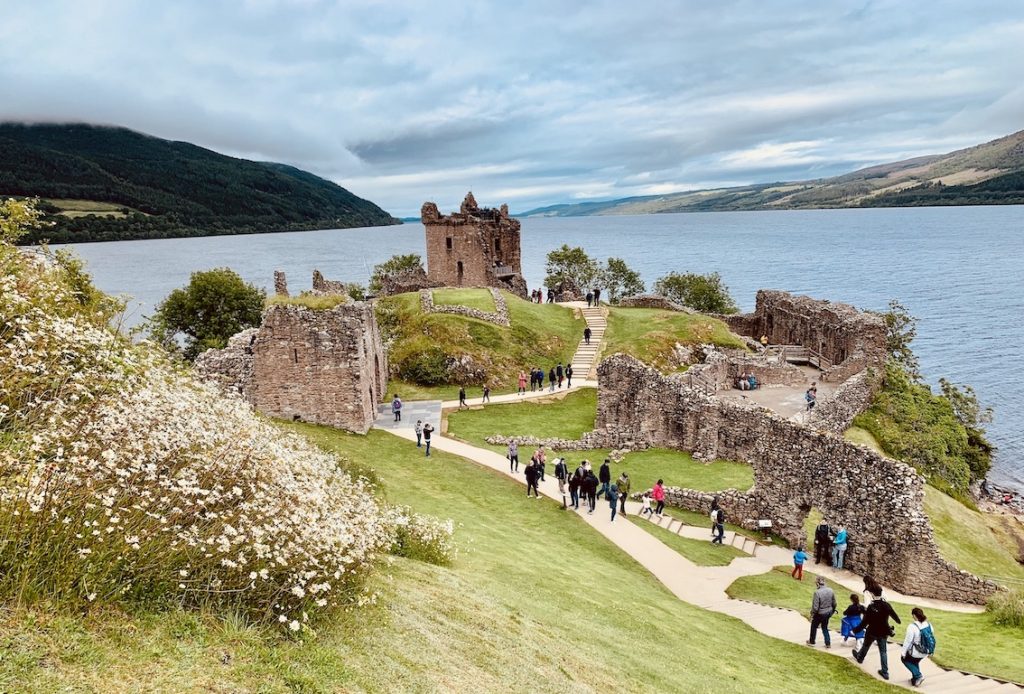 It’s not until you get to the top that you truly understand what a spectacular location Urquhart has! I mean, wow. It’s so damn beautiful you wonder how those kings and clans could be bothered with all their endless bloodshed.

The Scots attack the English in 1297. The English hit back in 1303. Besieged and plundered by The MacDonalds in 1545. The grisly Jacobite offensive of 1689. Why couldn’t they all just sit down, uncork a bottle of whisky and gaze out together over the rippling waters of Loch Ness? 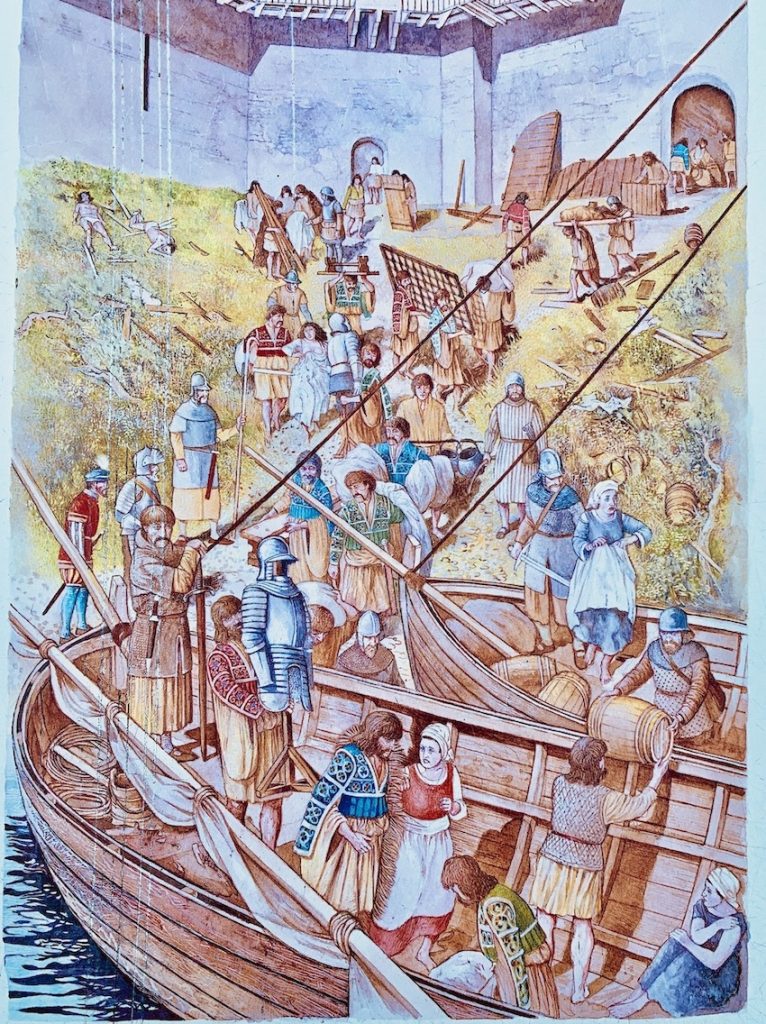 Speaking of The MacDonalds, their epic 1545 attack eventually became known as The Great Raid. Having gained access to the interior, the MacDonalds subsequently spent an entire month stripping the place bare.

Among their many captured treasures, they came away with chairs, tables, feather beds, brewing pots, doors, benches and paintings. Not to mention the fact that they somehow bundled over 3000 sheep, 370 horses and countless bags of oats and barley onto waiting boats! 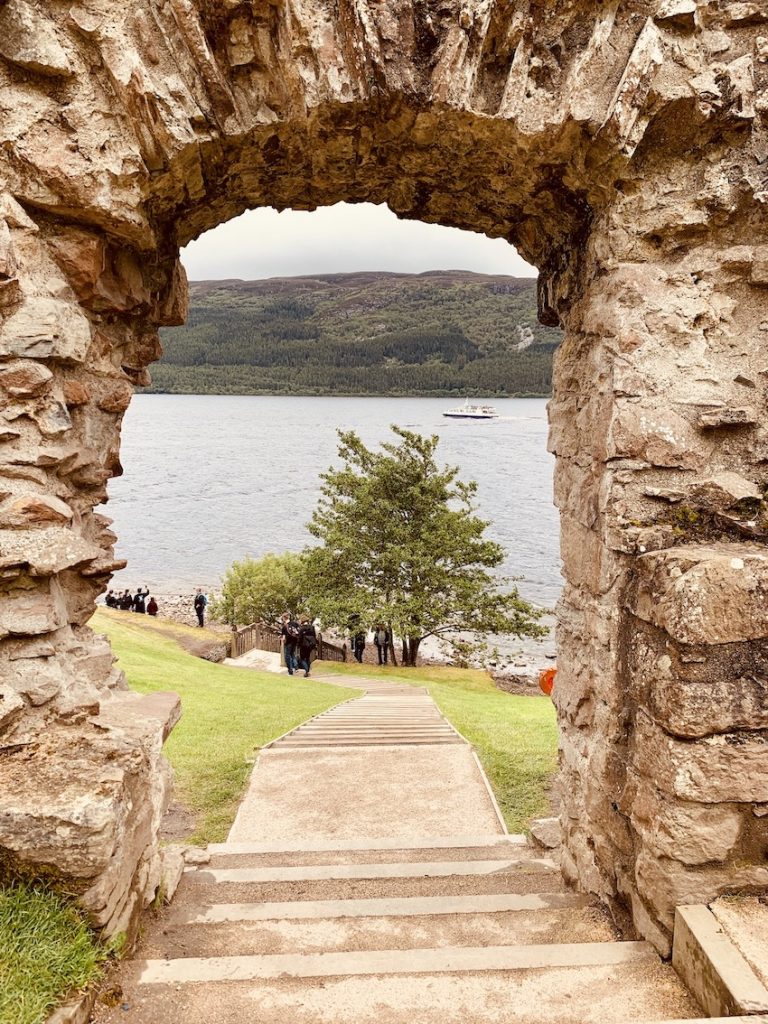 The Water Gate at Urquhart Castle.

From the top of the castle, I excitedly made my way down to the waters of Loch Ness by taking a path that runs under The Water Gate. Back in its heyday, everything the castle needed came through here. Exotic goods like wine and oranges for example would arrive by the boatful. 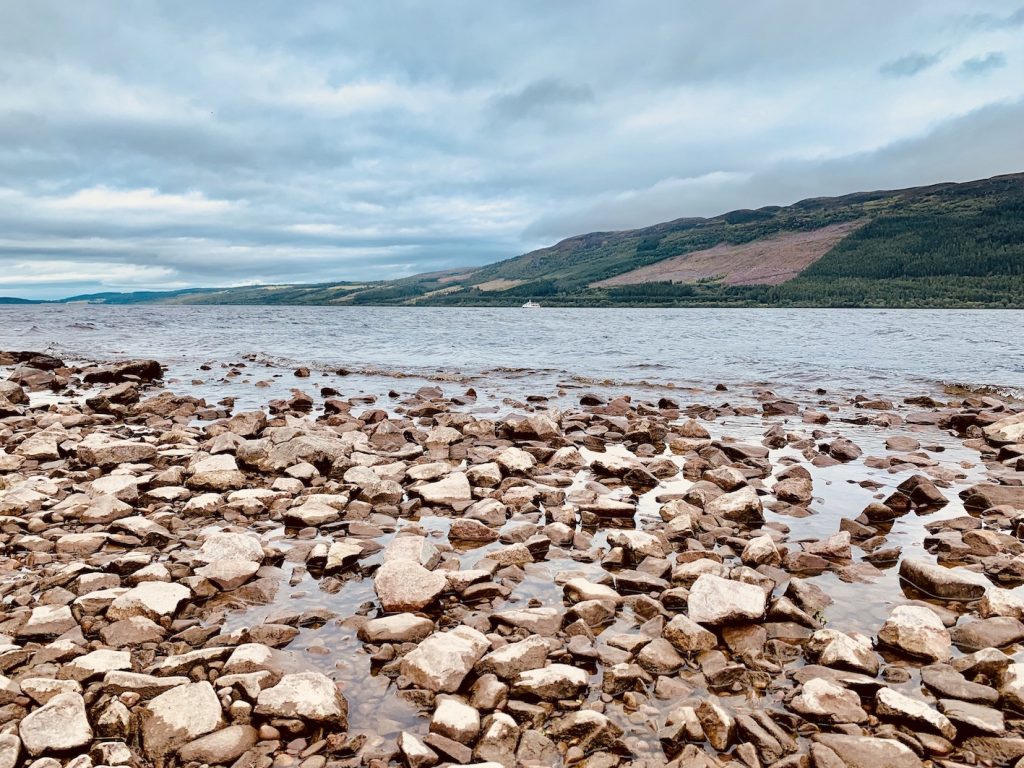 A narrow stretch of pebbly beach at the foot of Urquhart Castle.

It may not have been the best weather that day, but the dark afternoon failed to spoil the exceptional vista down on the atmospheric loch. 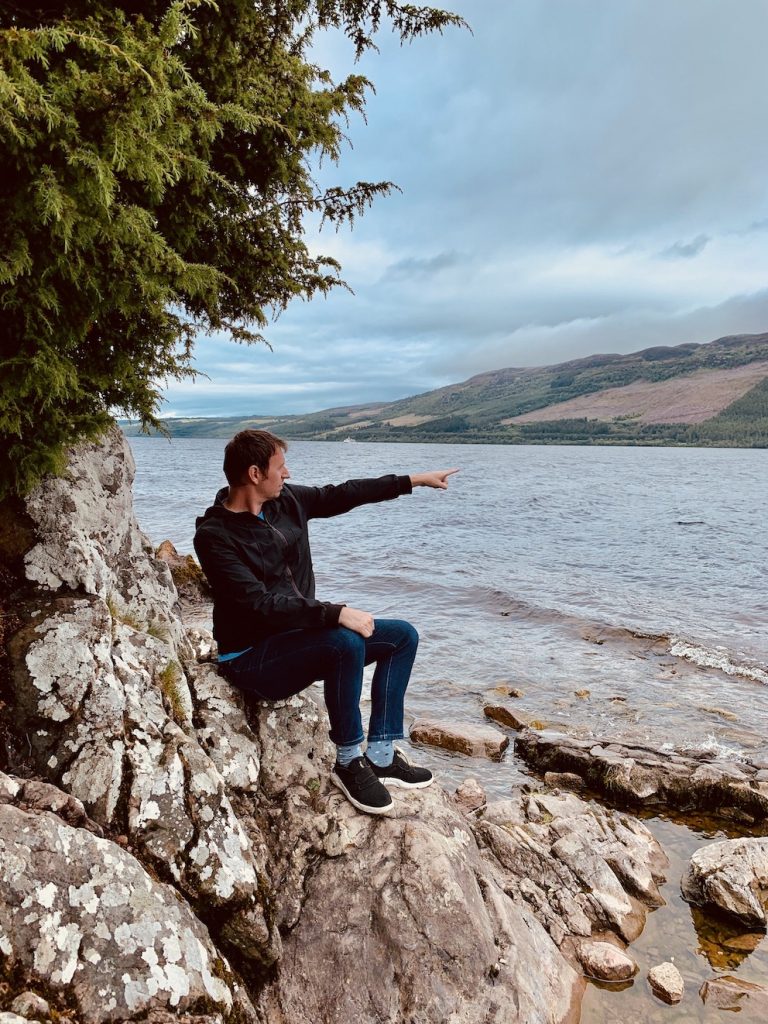 On the edge of Loch Ness.

Here I bumped into a Spanish mother and her son posing for photographs. Shamelessly stealing their idea, I asked Mama Spain to grab a cheesy shot for me. “Hang on a minute…. WHAT’S THAT?” 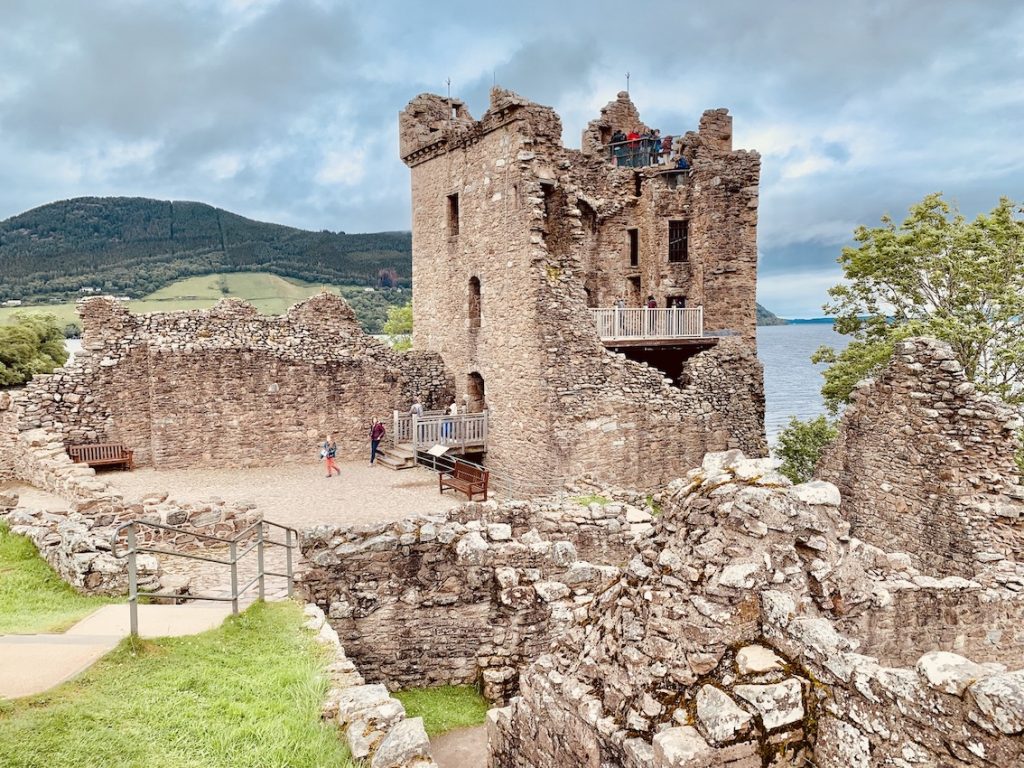 Making my way towards the exit and I almost neglected to stop by the impressive Grant Tower. It was added to Urquhart sometime after 1509 when King James IV awarded the castle to John Grant of Freuchie. A grand thank you, if you will, for Grant’s support in the king’s struggles against The MacDonalds. 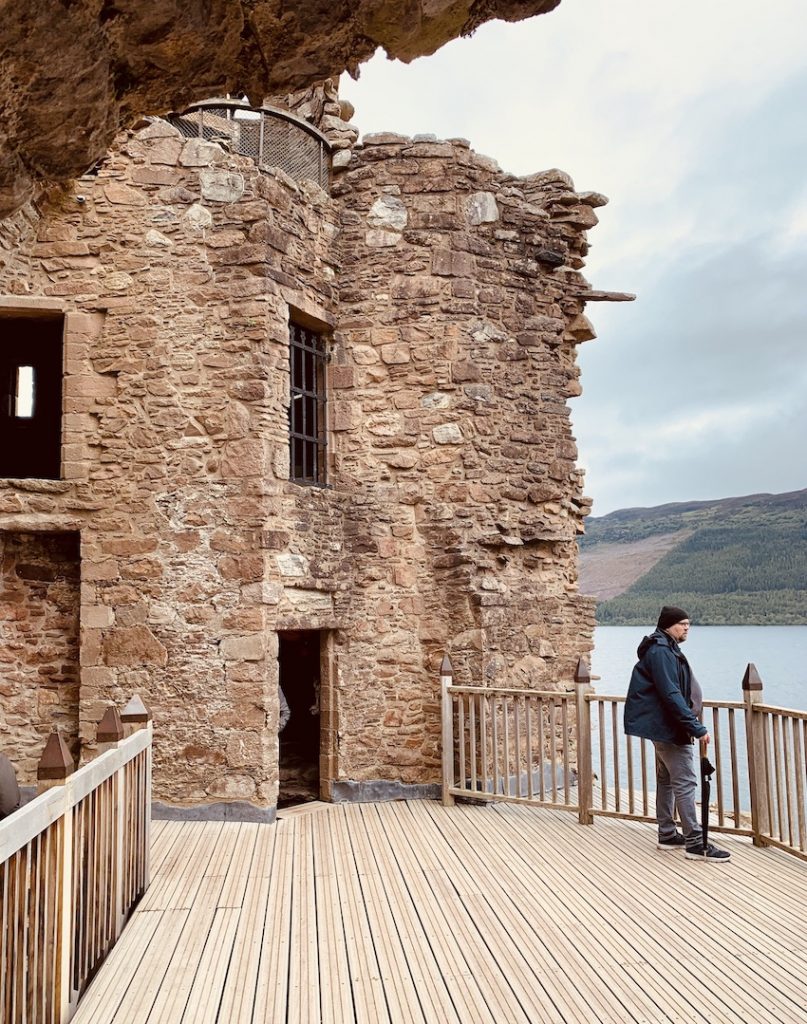 By this point Urquhart was no longer of strategic importance, hence Grant had the luxury of turning the castle into his own private wonderland. Grant Tower was just one of many projects Grant carried out over the years. Today you can climb the tower, where there are even more stunning Loch Ness views to drink in. 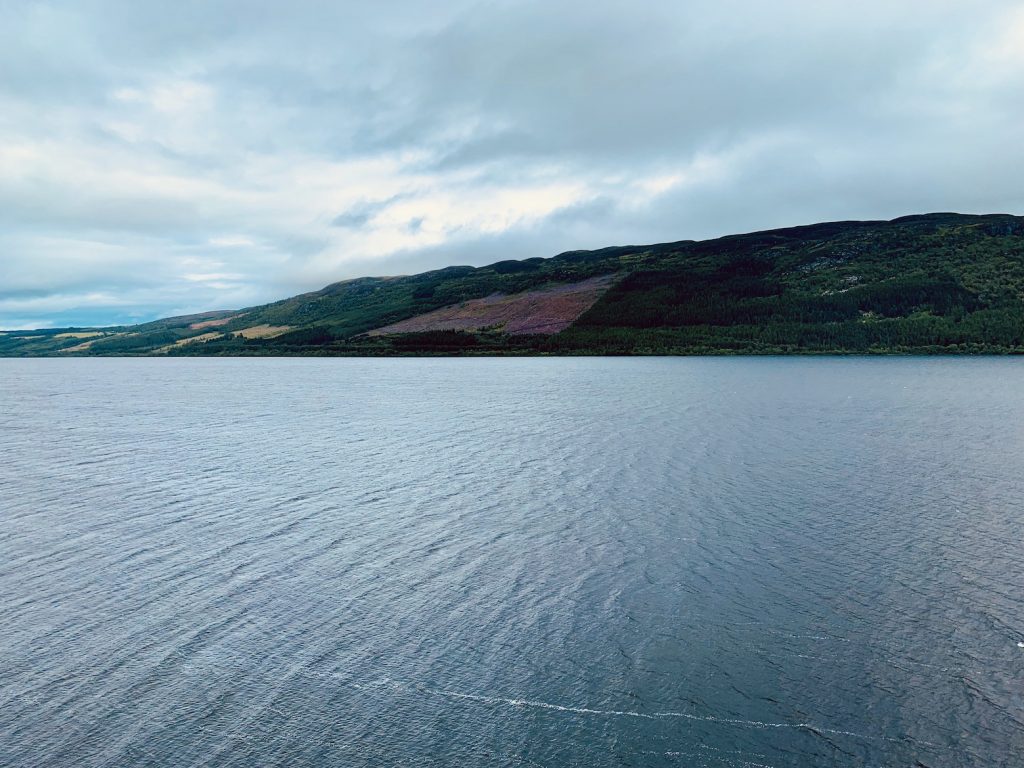 For more on Urquhart Castle, such as opening hours, admission costs and how to get there, check out this page from Historic Environment Scotland.