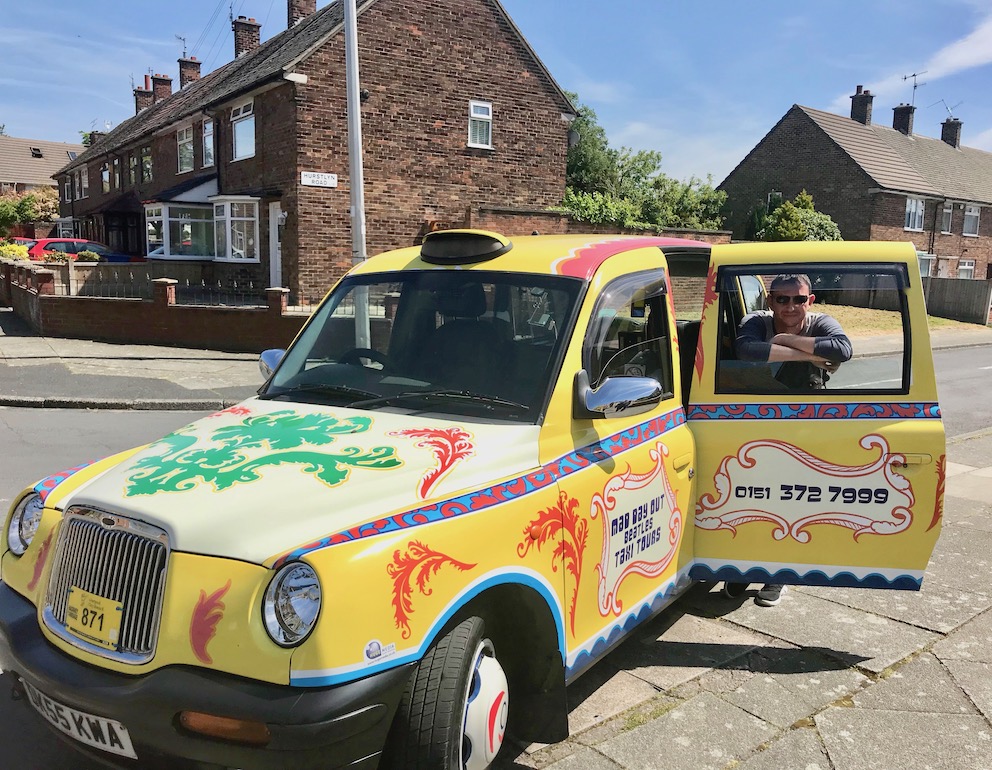 Before reading you might want to start with my article:

May 2019. What an incredible morning we’d had driving around Liverpool with Ian Doyle and his Mad Day Out Beatles Taxi Tour. We’d seen Ringo Starr’s childhood home in Admiral Grove and visited Sefton Park Hotel, where Stuart Sutcliffe lived during his Liverpool Art College days. Moreover, we’d driven through Penny Lane with its Macca-autographed sign and stopped for a look at the famous barbershop. 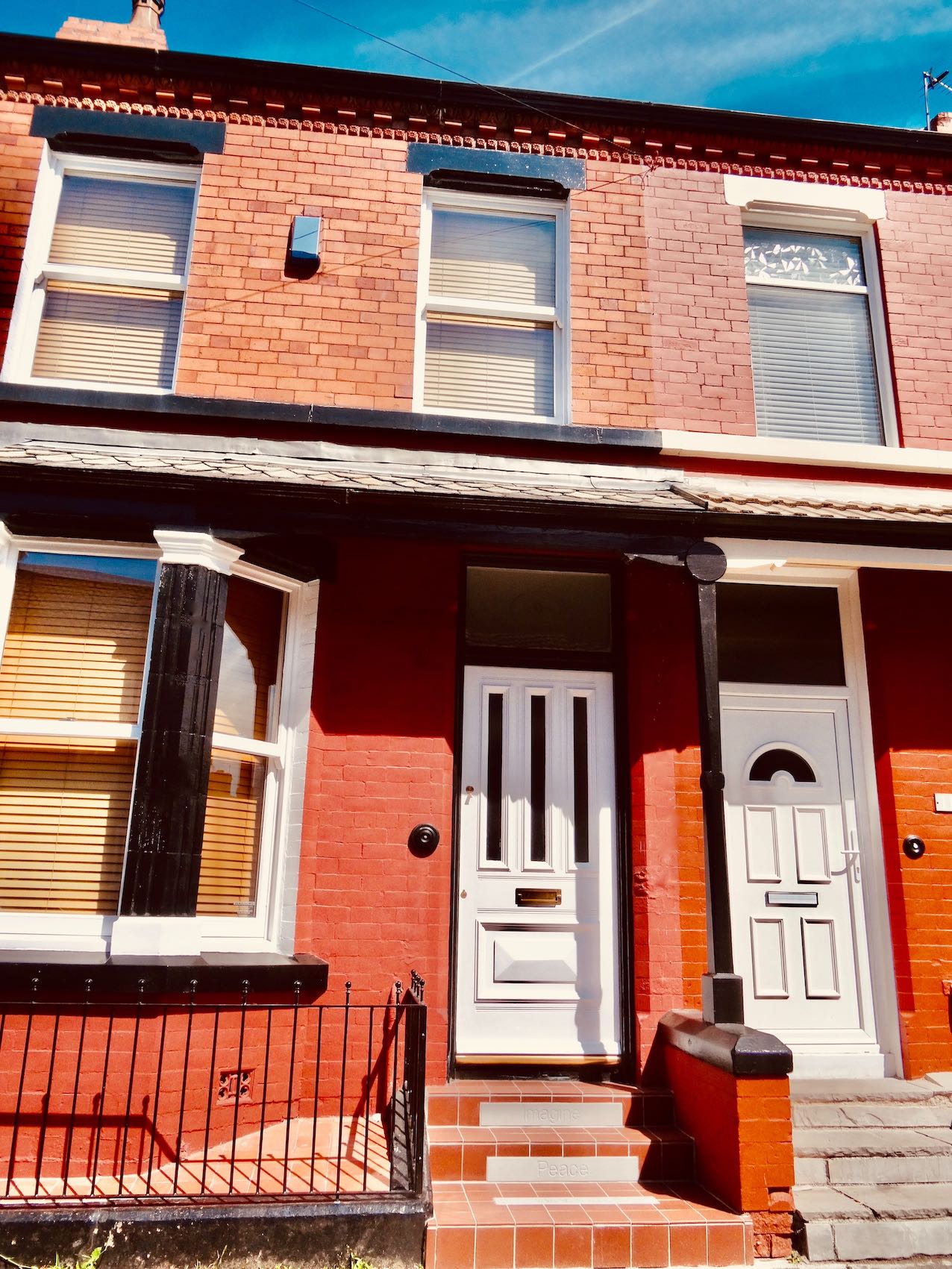 Now, Dear Prudence was turning onto Newcastle Road before coming to a gentle stop outside number 9… number 9…. number 9. Sorry, I couldn’t help myself. This suburban, red brick terrace house was John Lennon’s first childhood home. He lived here between 1940 and 1946 with his mother Julia. 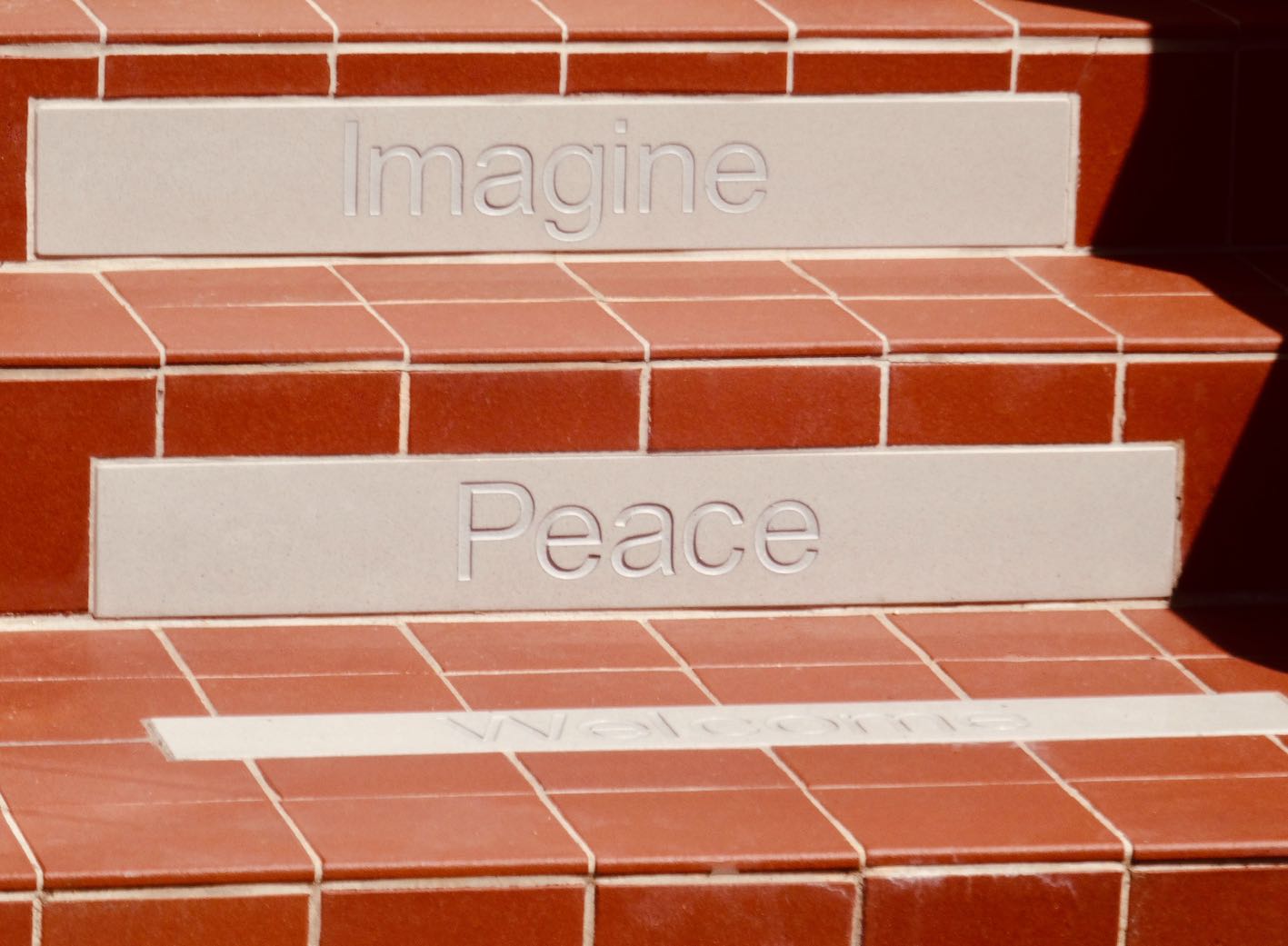 These days Yoko Ono owns the property. She bought the place in 2013, though reports at the time stated the owner was “an anonymous American”. Yoko was always a crafty one.

However, it wasn’t until 2018 that Yoko actually got round to seeing the place for herself. She swung by for a quick visit during a break from promotional duties at The Double Fantasy Exhibition in The Museum of Liverpool. It was Yoko herself who added the Imagine Peace tiles to the house steps. 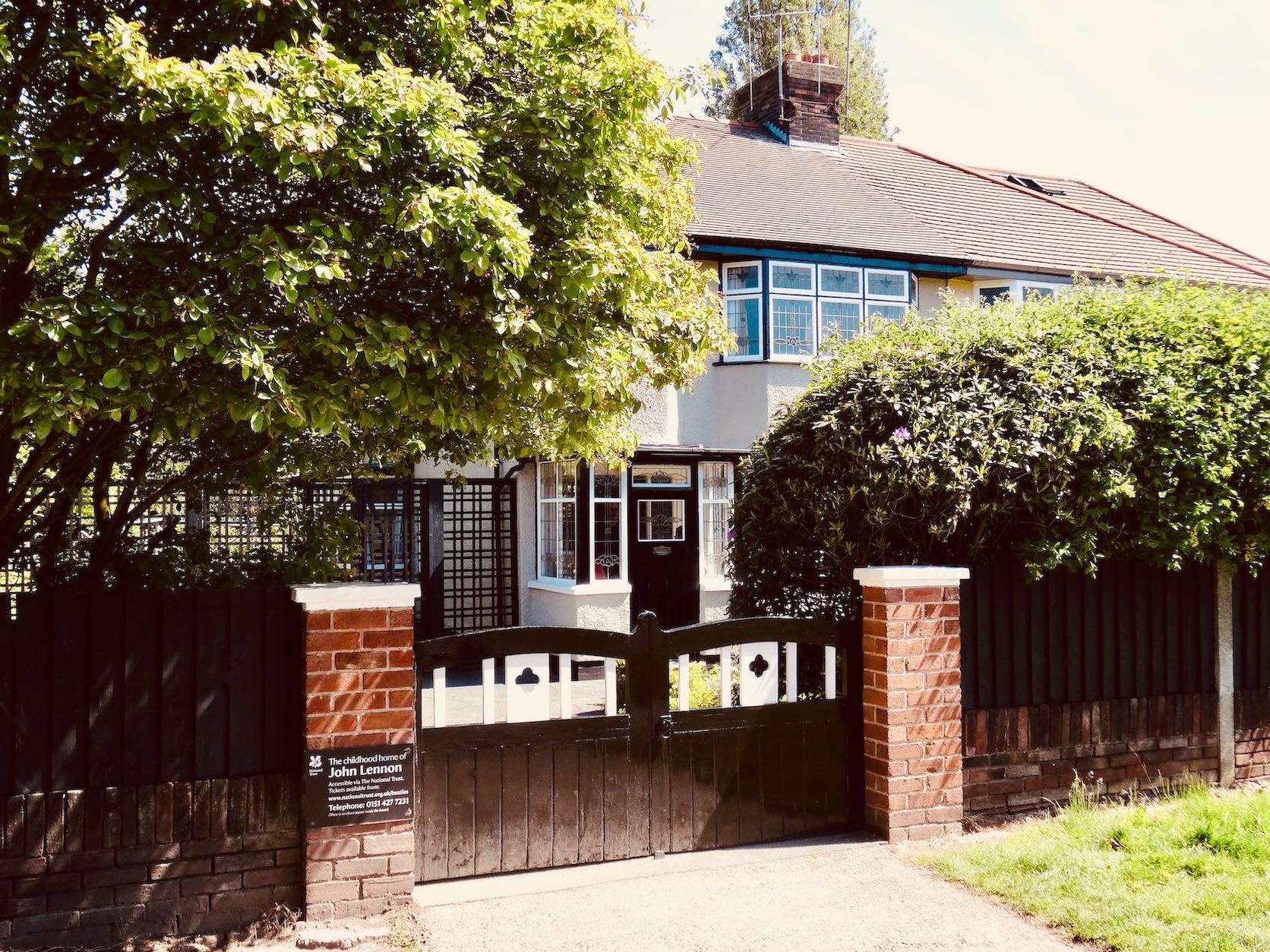 When John was five years old, Julia sent him away to live with his aunt Mimi and her husband George. They lived in this pretty home at 251 Menlove Avenue. Affectionately known as Mendips, this is the house John lived in for seventeen years until he was 22.

This was where he learned to play guitar, though his strict aunt forbade him to practice in the house. “Playing the guitar is all very well John”, she told him, on more than one occasion. “But you’ll never make a living at it.” 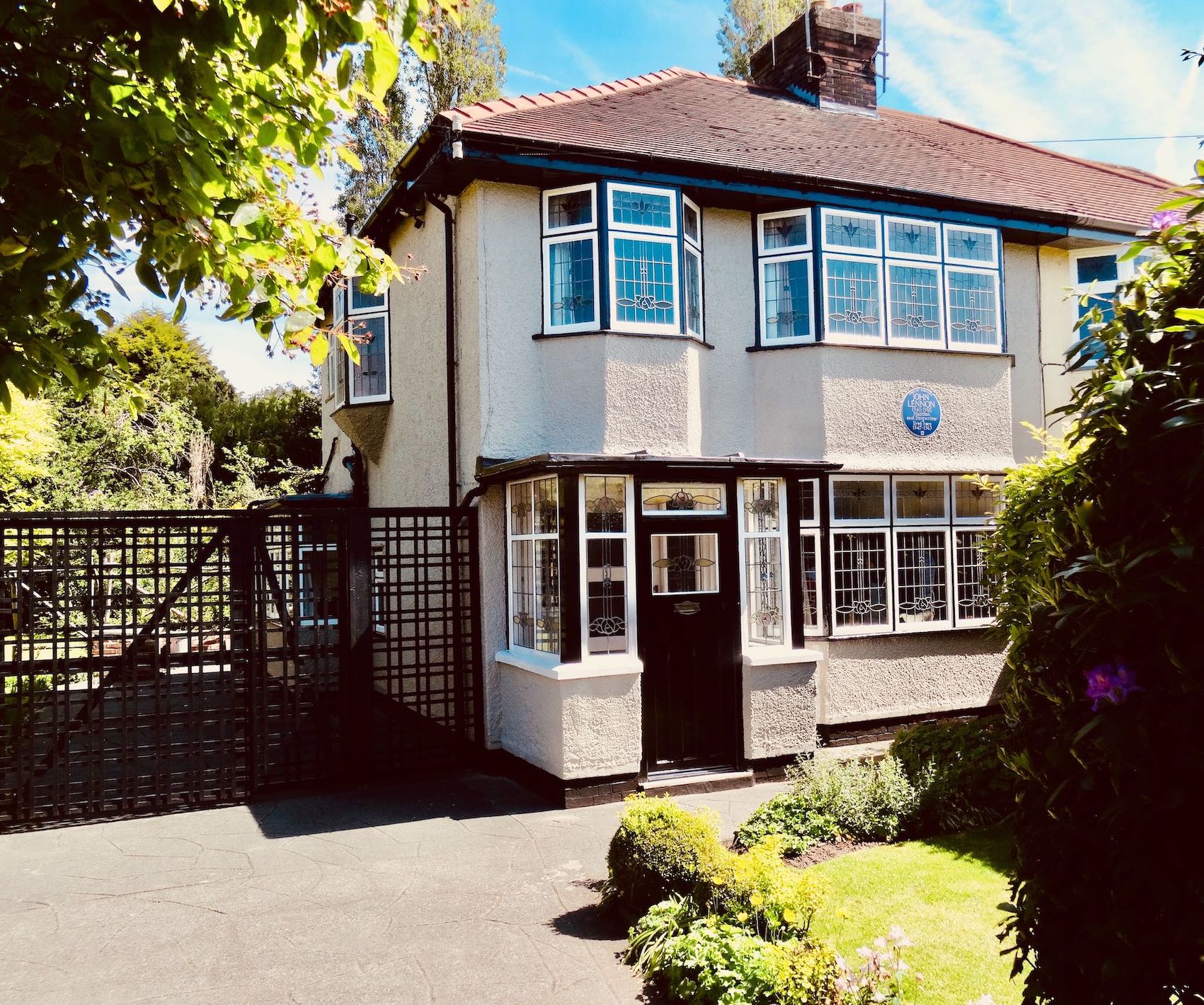 Despite this, Paul McCartney claims at least one song came out of these four walls. Paul says one evening they laid down an early version of I’ll Get You, which eventually ended up as the b-side to She Loves You. 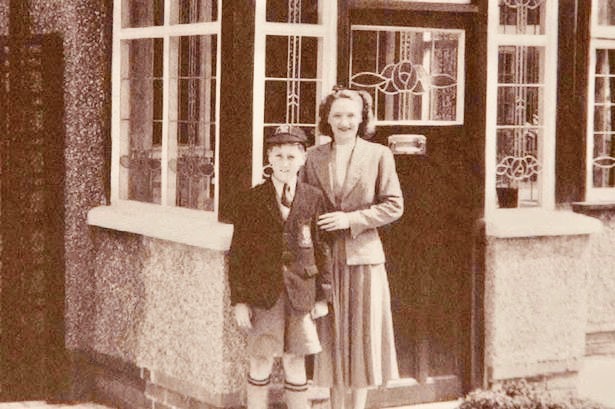 John and Mimi at Mendips.

Yoko Ono purchased the house in 2002 before promptly handing it over to the National Trust. They’ve since restyled the interior with an authentic 1950s look and opened it up for viewings, by appointment only.

“When John’s house came up for sale I wanted to preserve it for the people of Liverpool. And John Lennon and Beatles fans all over the world.” 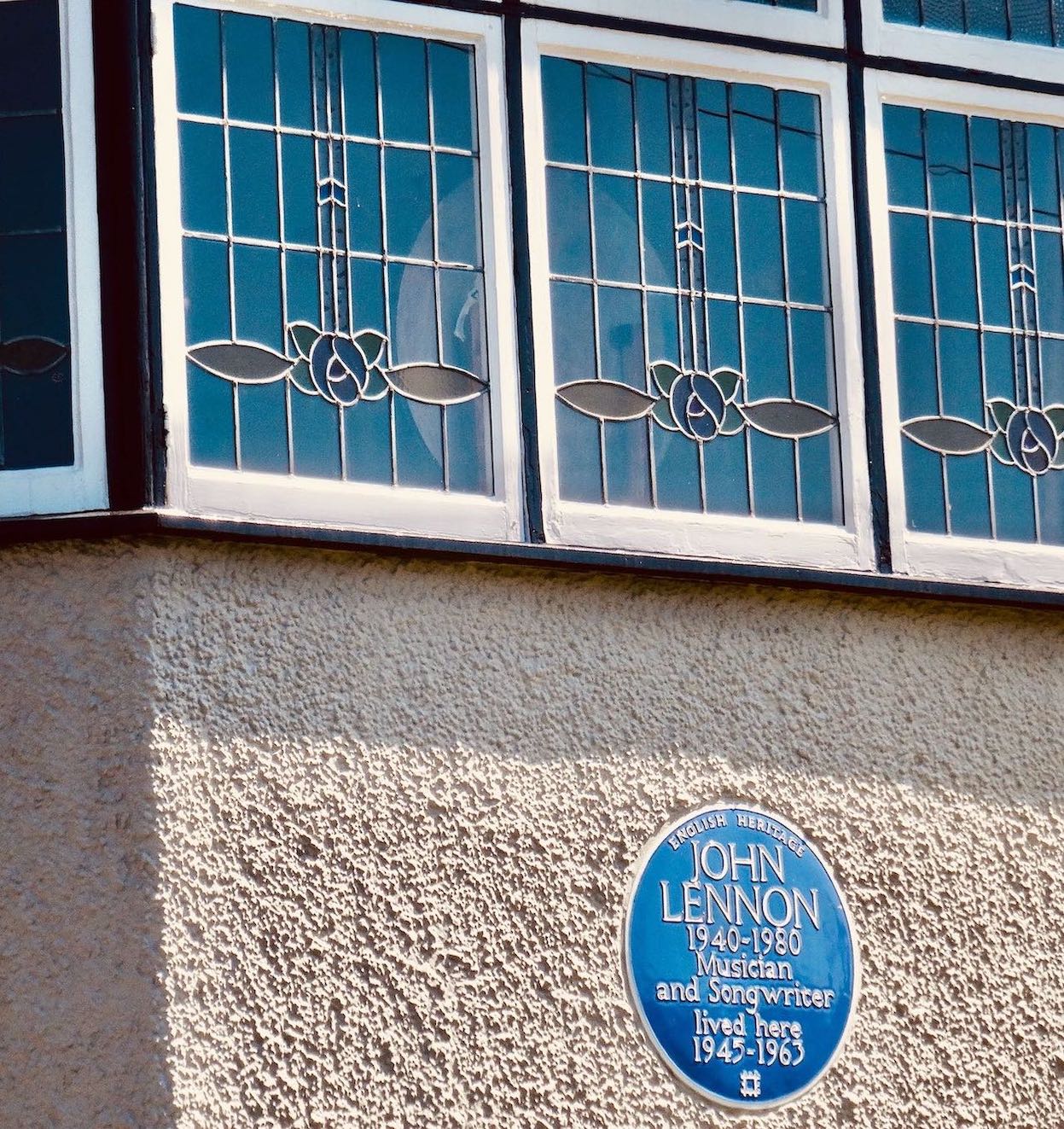 While Lennon’s time at Mendips was a mostly happy one, the site also stands as a testament to one of the saddest days of his life. On the 15th of July 1958 his mother Julia came to pay one of her near daily visits. 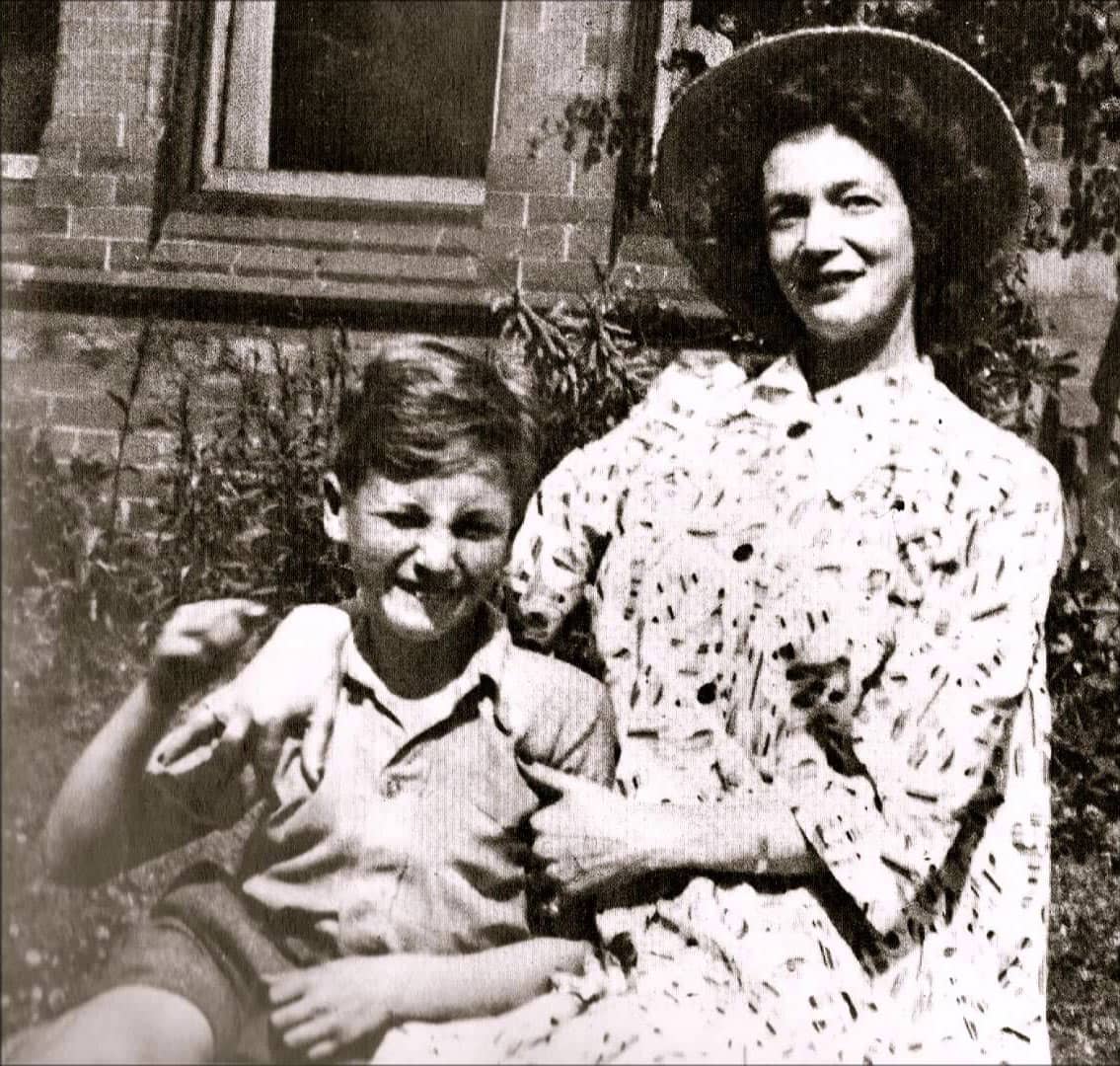 Just moments after she left, Julia was struck and killed by a car driven by an off-duty policeman. Her death traumatised Lennon, who descended into depression, alcoholism and sporadic outbursts of aggression. His mother’s passing finally ended up in a number of John’s songs, including Julia and My Mummy’s Dead. 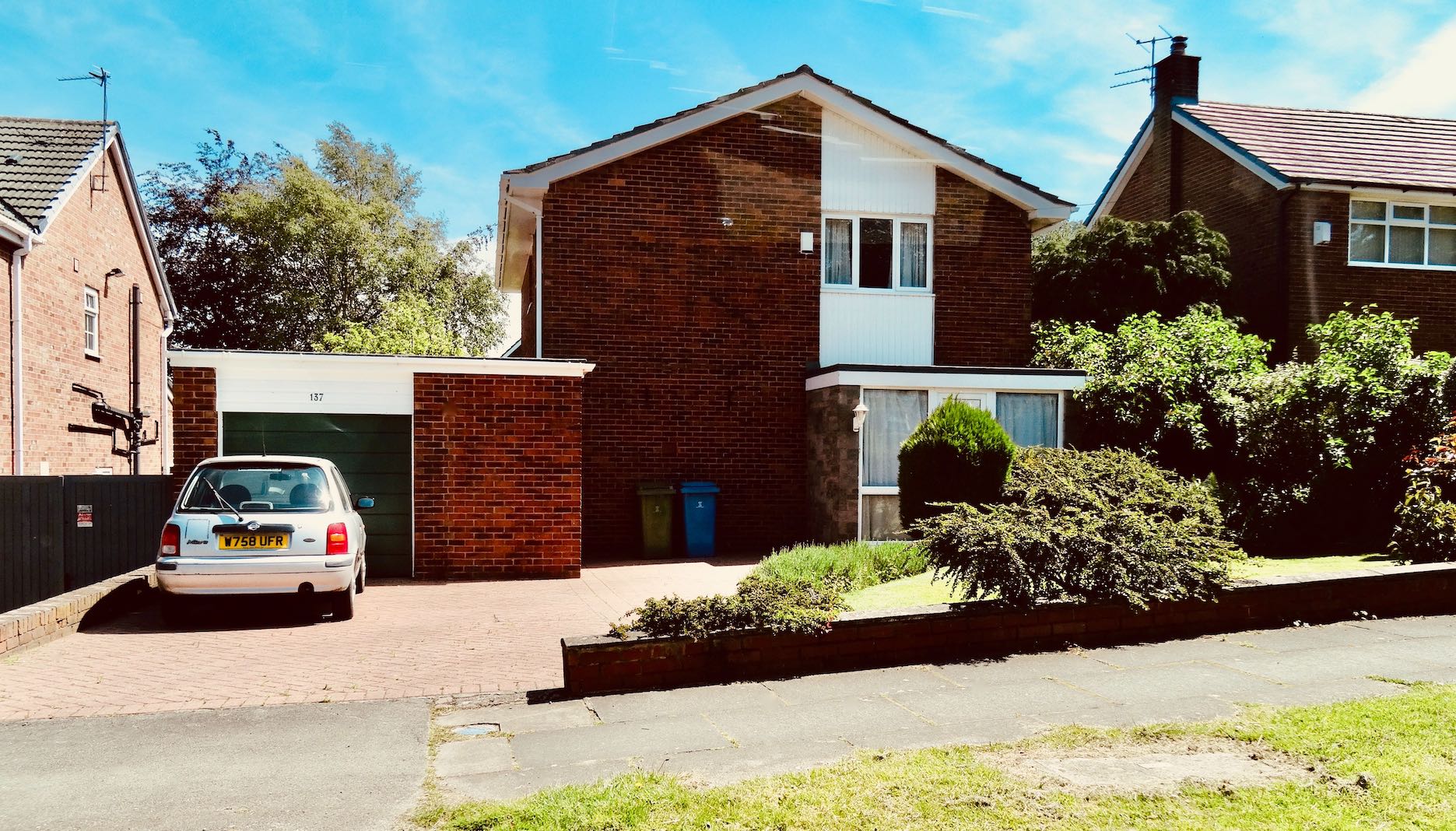 “I don’t often include this one” said Ian, turning Dear Prudence onto a leafy lane. We had arrived at Gateacre Drive, the taxi rumbling to a gradual stop in front of number 137.

I’d certainly never heard of this house, bought by John for his two half sisters Julia and Jackie. Following the death of their father Bobby Dykins (also in a road accident), John was dismayed to hear that the girls were subsequently living with their Aunt Harriet, her husband Norman and son David. All five crammed under one roof in a small two bedroom cottage. 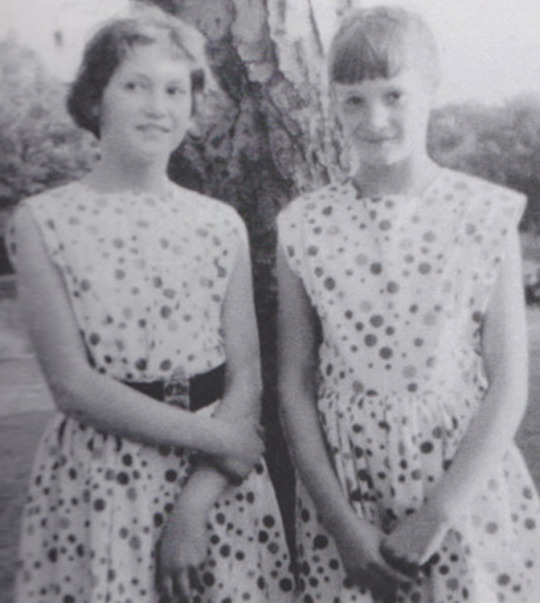 It was 1967 and Lennon was, by this time, a millionaire. Hence he stepped in to purchase a three bedroom property for his half sisters on Gateacre Drive. Furthermore, he told them to furnish the place however they wished and simply send him the bills. 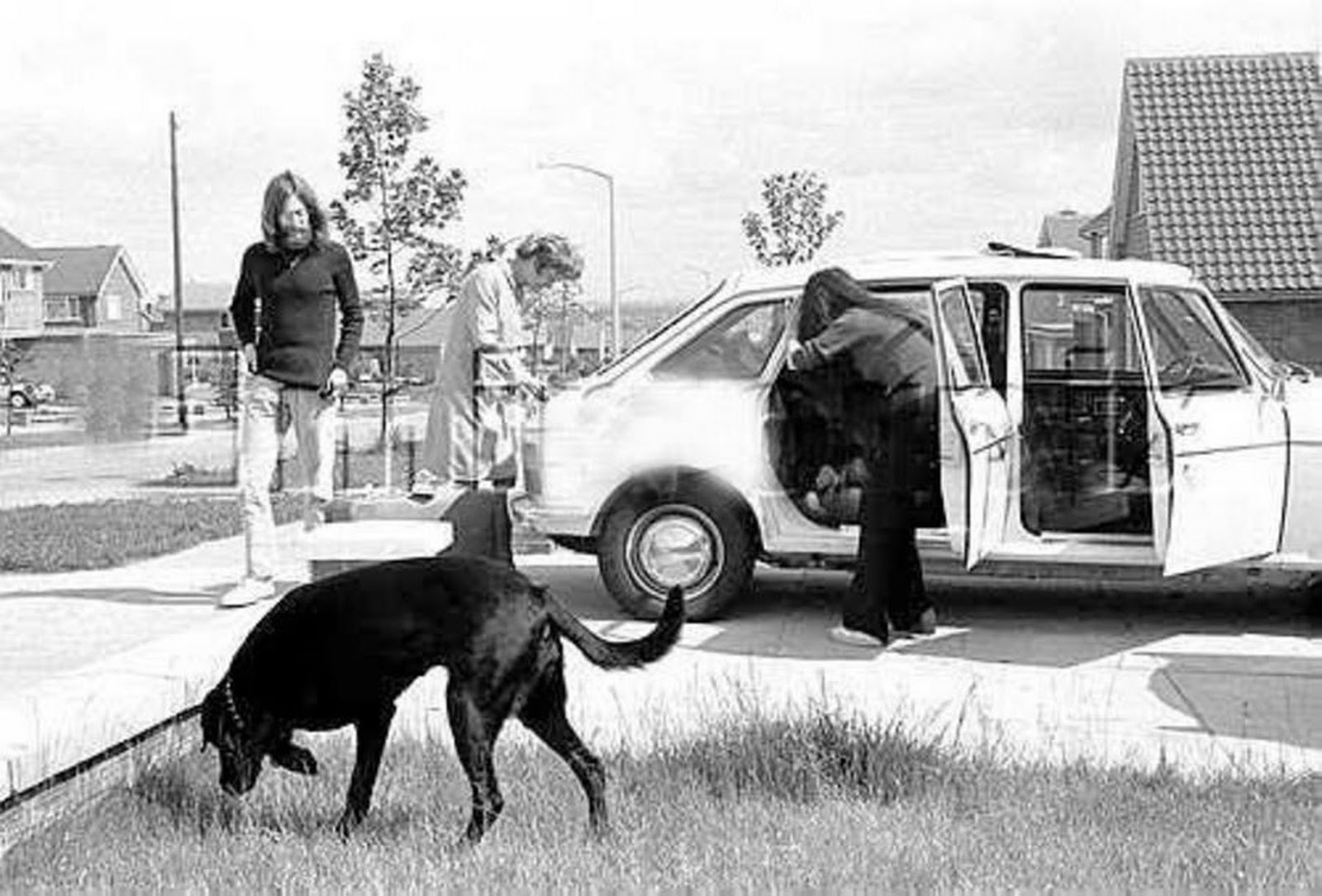 In 1969 John visited the house he bought for Julia and Jackie. Unfortunately, their stay was not a happy one. As the story goes, John’s extended family were not fond of Yoko, who they found standoffish and fussy with her strict macrobiotic diet.

A persistent rumour about their stay is that one of John’s half sisters told Yoko she was ugly. While we’ll probably never know exactly what happened, later events in 1991 are very telling. This was when the family discovered that John had neglected to secure the property in their name. Consequently, in accordance to Lennon’s will, the house moved back into Yoko’s hands. 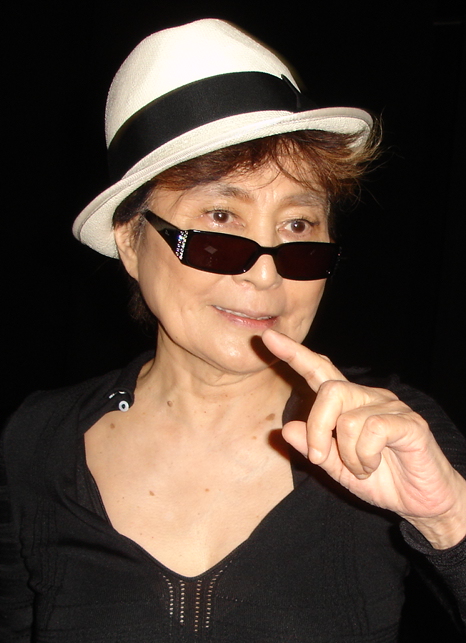 A lengthy back and forth between Yoko’s lawyers and the family in Liverpool ensued. But in the end Yoko emerged victorious and donated the property to The Salvation Army. Sources close to the family revealed that Yoko offered Jackie and Julia money if they needed it, but that the girls rejected this. 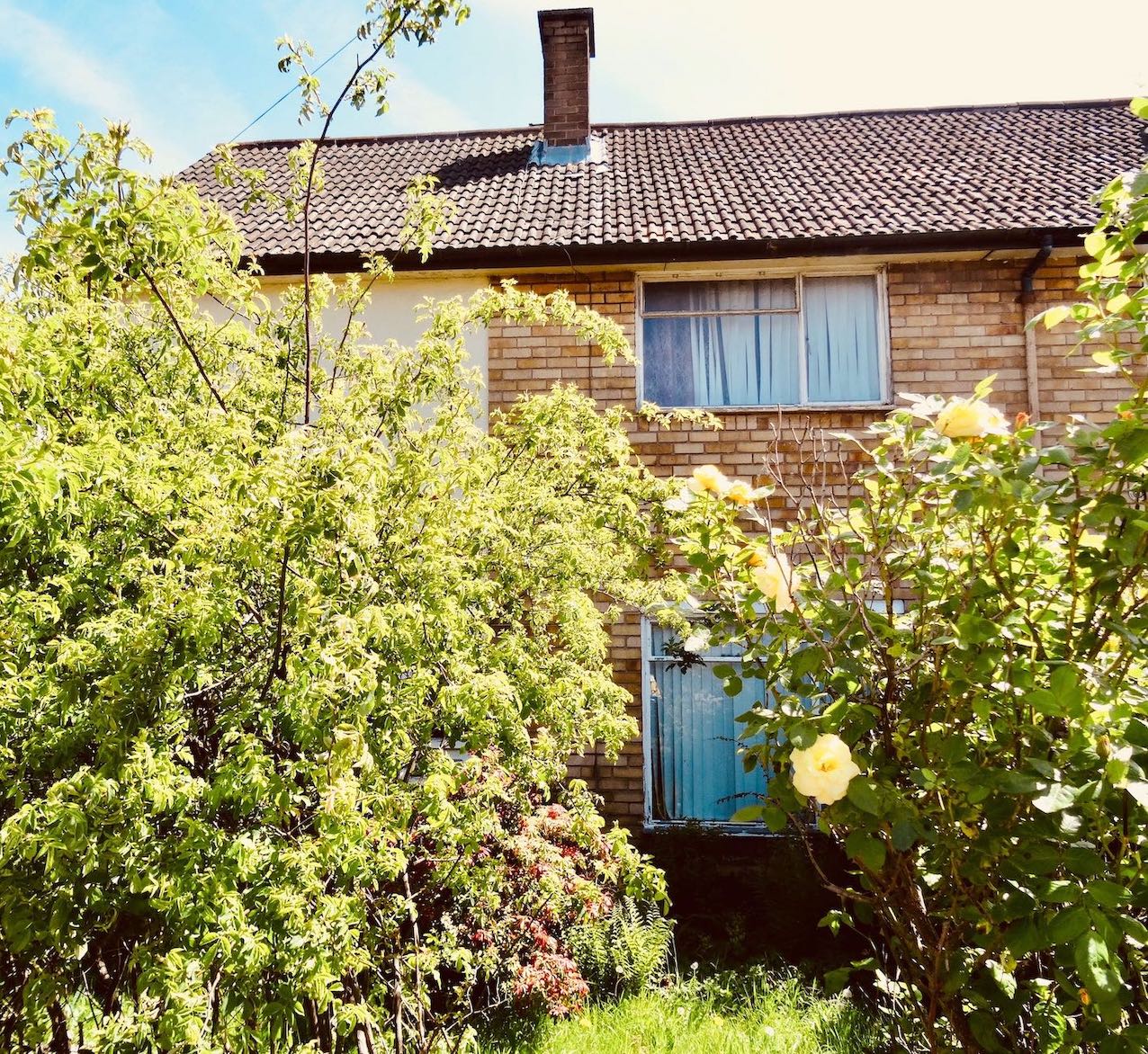 Next on the Beatles’ homes trail was 174 Mackets Lane, George Harrison’s house from October 1962 to November 1963. The Harrisons moved about a fair bit during George’s youth and this was actually his third city home. 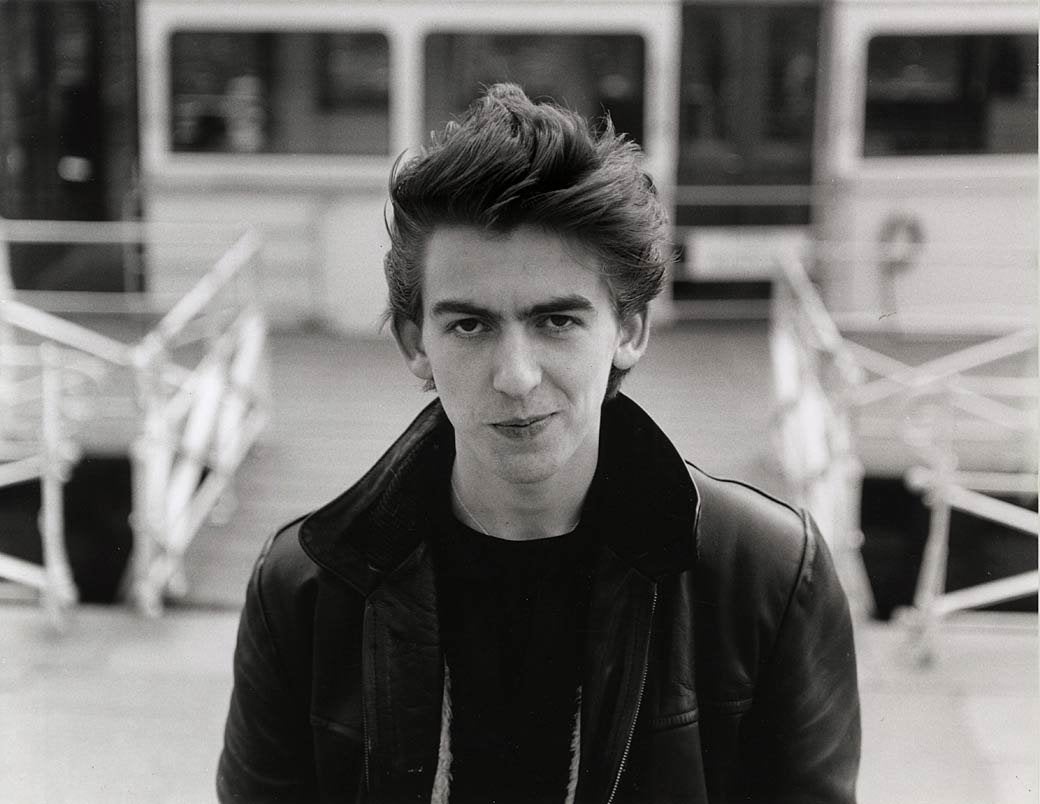 As a teen George had a job at the local butcher and continued to live in the house during the early days of Beatlemania. Of all the Beatle childhood homes I saw during the tour, this was the most unloved, with a rusty old gate and overgrown garden.

The Beatles In Liverpool. 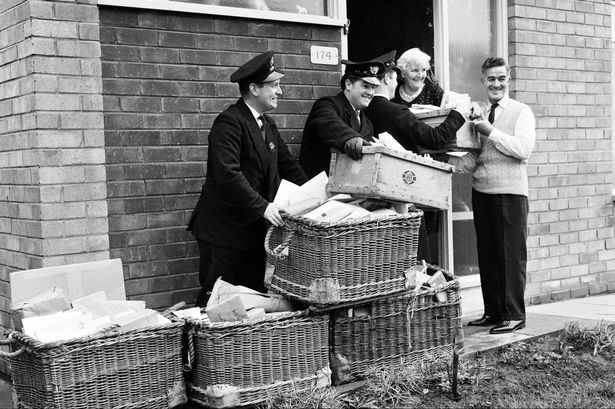 This brilliant photo shows how it took three postmen to deliver five giant crates of fan mail to the Harrison family home on George’s 21st birthday on the 25th of February 1964. The constant barrage of fan and media attention eventually led George to buy his parents a larger and more private bungalow in the suburbs of nearby Warrington in 1965. 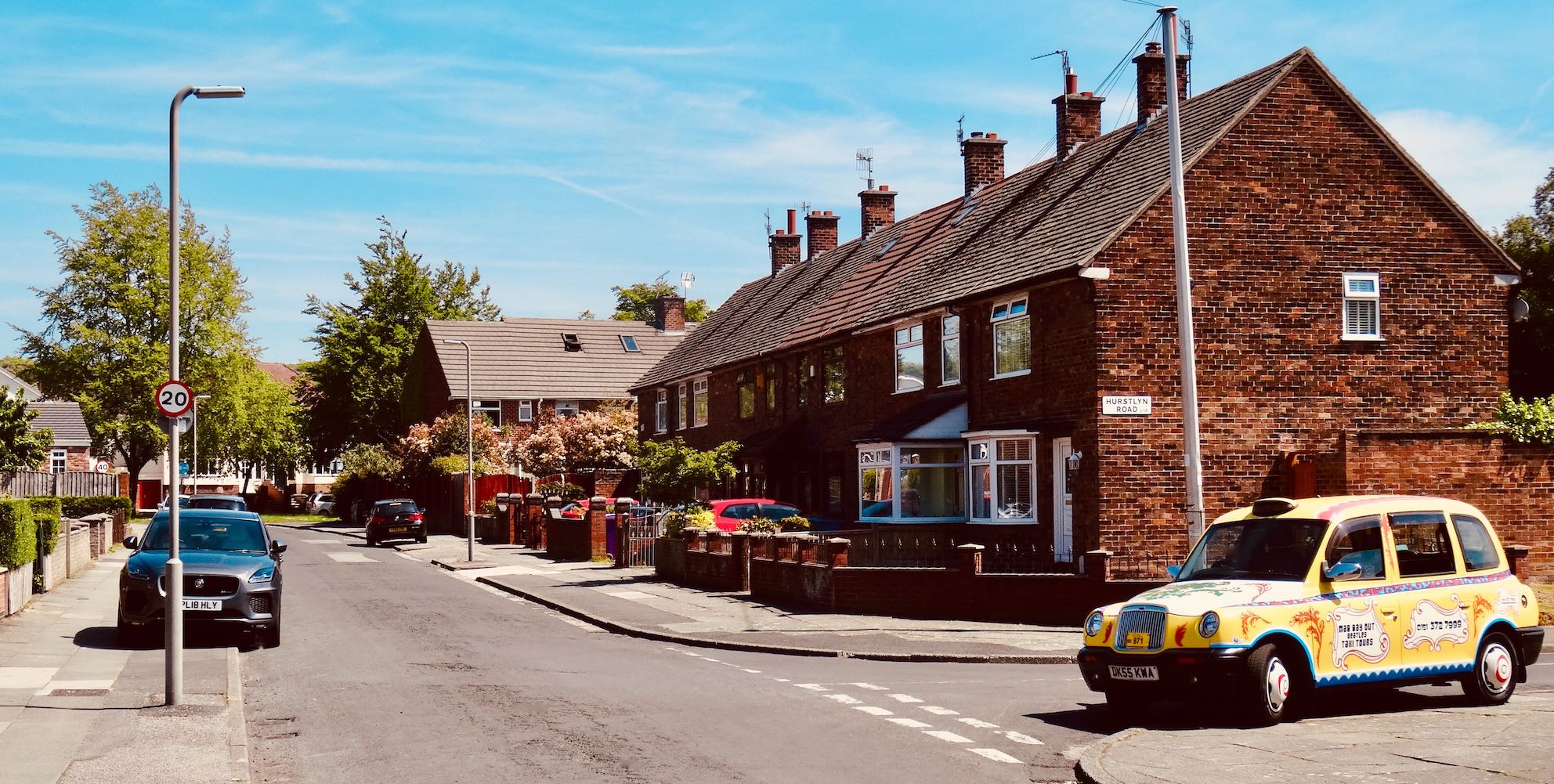 It was quiet when Ian parked in Forthlin Road, the street Paul McCartney moved into in April 1956 while he was still in senior school. As we jumped out of Dear Prudence I was struck by how quiet it was that afternoon. Just myself, Ian, Steppers and a local man walking by with a t-shirt that read: STILL HATE THATCHER. 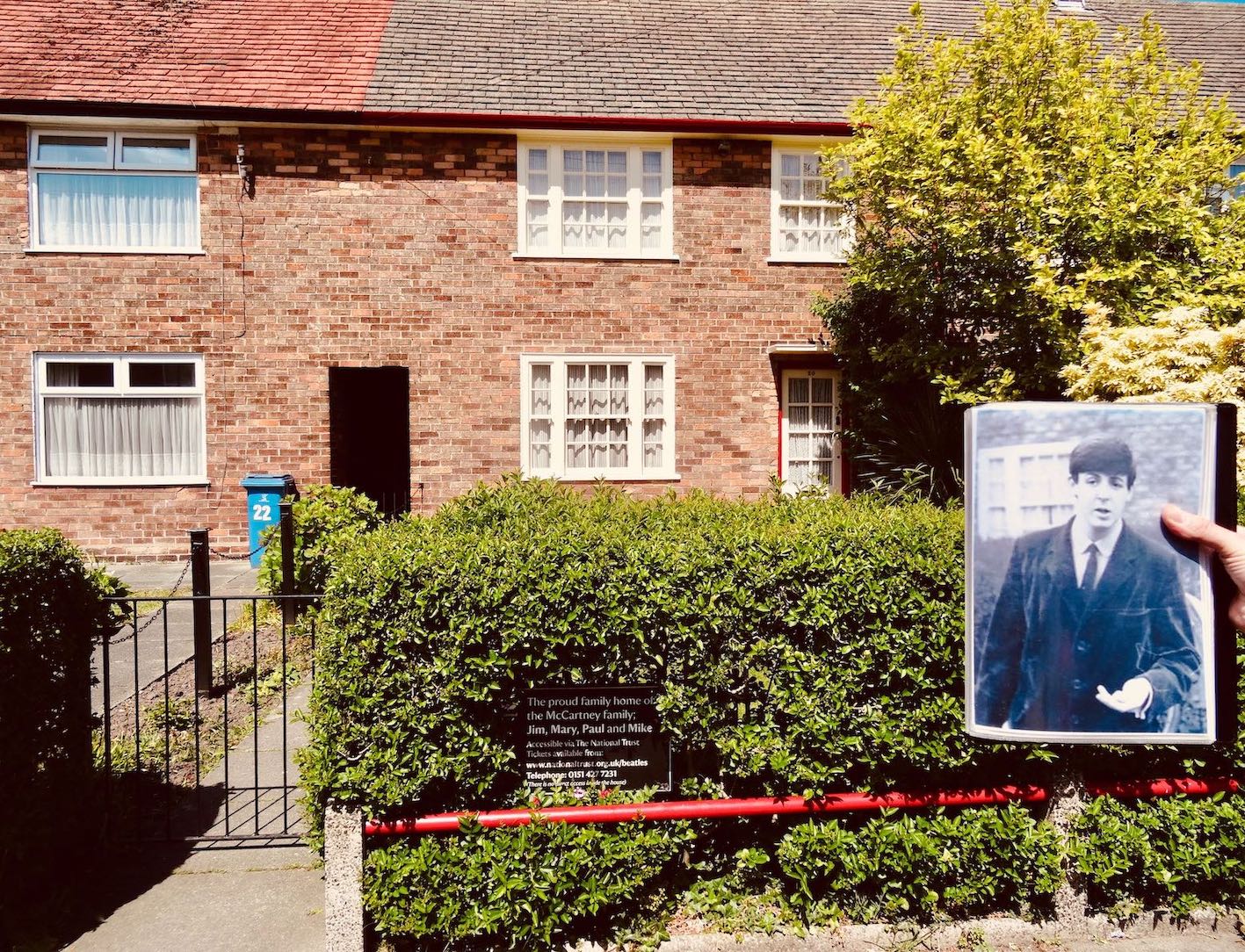 The National Trust describes 20 Forthlin Road as “The Birthplace of The Beatles”. After all, this is where Lennon and McCartney came up with a chunk of their early compositions.

Luckily for them, Paul’s dad was much more chilled out than Aunt Mimi. Thus they could come and go as they pleased. Among the tunes John and Paul came up with here are One After 909, I’ll Follow the Sun and Hello Little Girl. 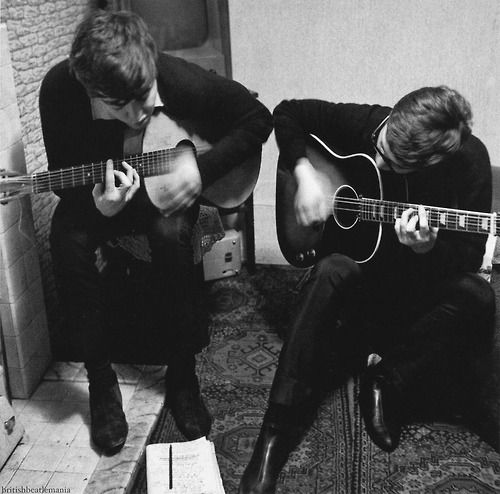 Gliding down Liverpool’s streets once again and suddenly the stereo kicked into life. This time it was the sublime Eleanor Rigby. Fittingly, we were on our way to the the suburb of Woolton, home to St. Peter’s Church, its graveyard and a very famous headstone.

“Aaaaah, look at all the lonely people”. 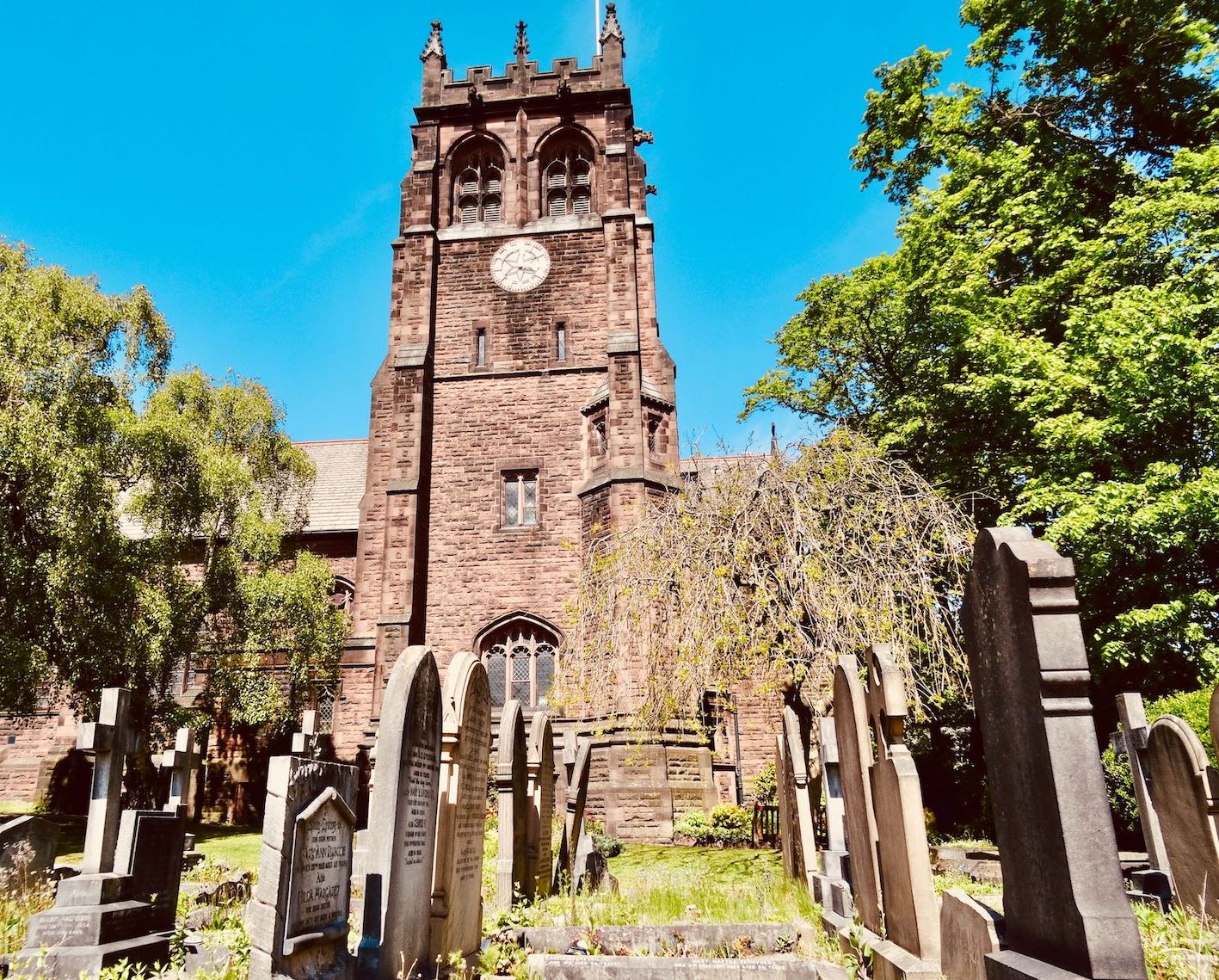 Paul McCartney first met John Lennon on Saturday the 6th of July 1957 in the church hall. John was about to play live with his group The Quarrymen when a mutual friend, Ivan Vaughn, introduced him to Paul.

Lennon was immediately impressed. First, McCartney showed him an enlightening technique for tuning his guitar. Then Paul proceeded to perform excellent renditions of Eddie Cochran’s Twenty Flight Rock and Gene Vincent’s Be-Bop-a-Lula. That first meeting may have only lasted twenty minutes, but it was enough to make Lennon invite McCartney to join his group.

Strolling through St. Peter’s pretty graveyard, Ian expertly guided us towards the headstone of a certain Eleanor Rigby. For years I believed McCartney wrote the song after discovering the grave. But Paul says the headstone at St Peter’s church is merely incidental. Really? 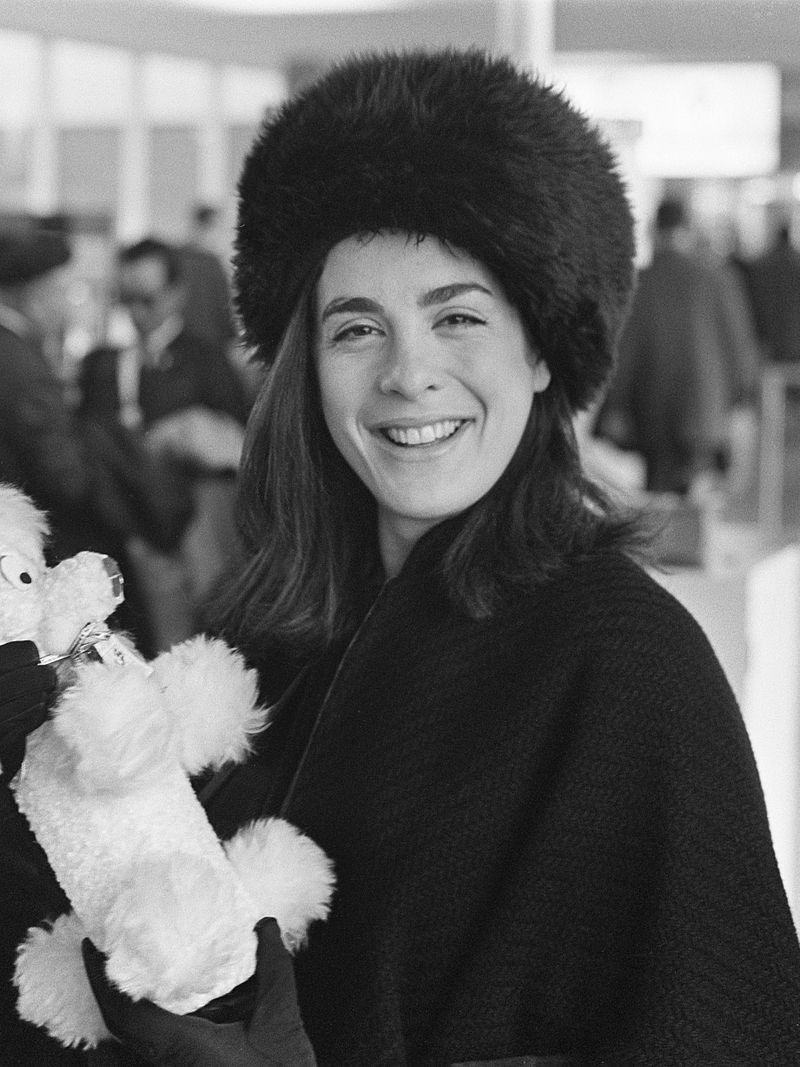 Rather, Macca, insists he composed the track with a fictitious character in mind. He went with the name Eleanor as a quiet tribute to the actress Eleanor Bron, who had appeared alongside The Beatles in their 1965 movie Help! Rigby, he says, was the name of a wine store he’d once visited in Bristol. A curious end to an exceptional day discovering Liverpool’s fascinating Beatles spots. 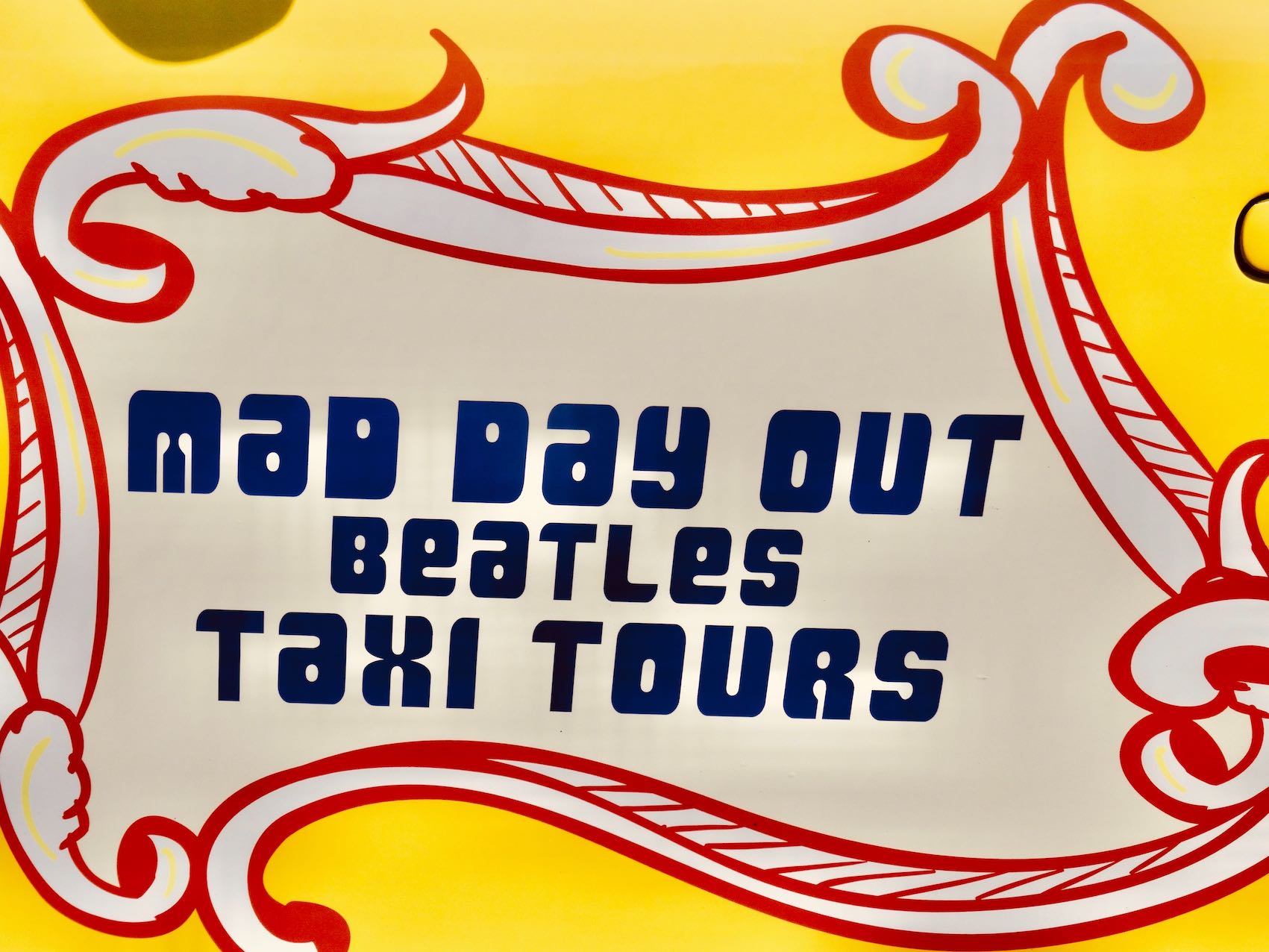 My Mad Day Out with Ian Doyle’s Beatles Taxi Tours was the definitive highlight of my trip to Liverpool. To find out more, have a look at his website.

We took the three hour Rickenbacker tour priced at £70 for the taxi. That’s £35 each, not too much more than The Magical Mystery Bus tour, which typically goes for between £18-20pp. It’s an especially good deal, I think, if you’re in a party of three or four.

For more on the greatest rock band in history, check out my other articles on The Beatles In Liverpool. Alternatively, have a read about my visit to Abbey Road in London. Maybe read my review of The White Album.

Antony Gormley’s Statues in the Sand. How many c

Exposed to nearly fifteen years of the good old Br

A close up look at one of Antony Gormley’s statu

When in Liverpool…. take a city centre train for

When in Sefton Park, don’t miss Palm House, a st