I’m all about the parks whenever I return to the English capital. After all, they’re incredibly beautiful, not to mention merciful on the old wallet. Typically, I return home after another long spell in Asia. Thus I cannot get enough of that fresh English air, even if it’s often a tad cutting, as it was on this particular April afternoon.

I had just finished lunch with a friend in Greenwich Market. She had really annoyed me, to say the least. In fact, upon hearing that I was heading back to China for a third spell of teaching, she let out an exasperated sigh. “Leighton, when are you going to get a proper job?” 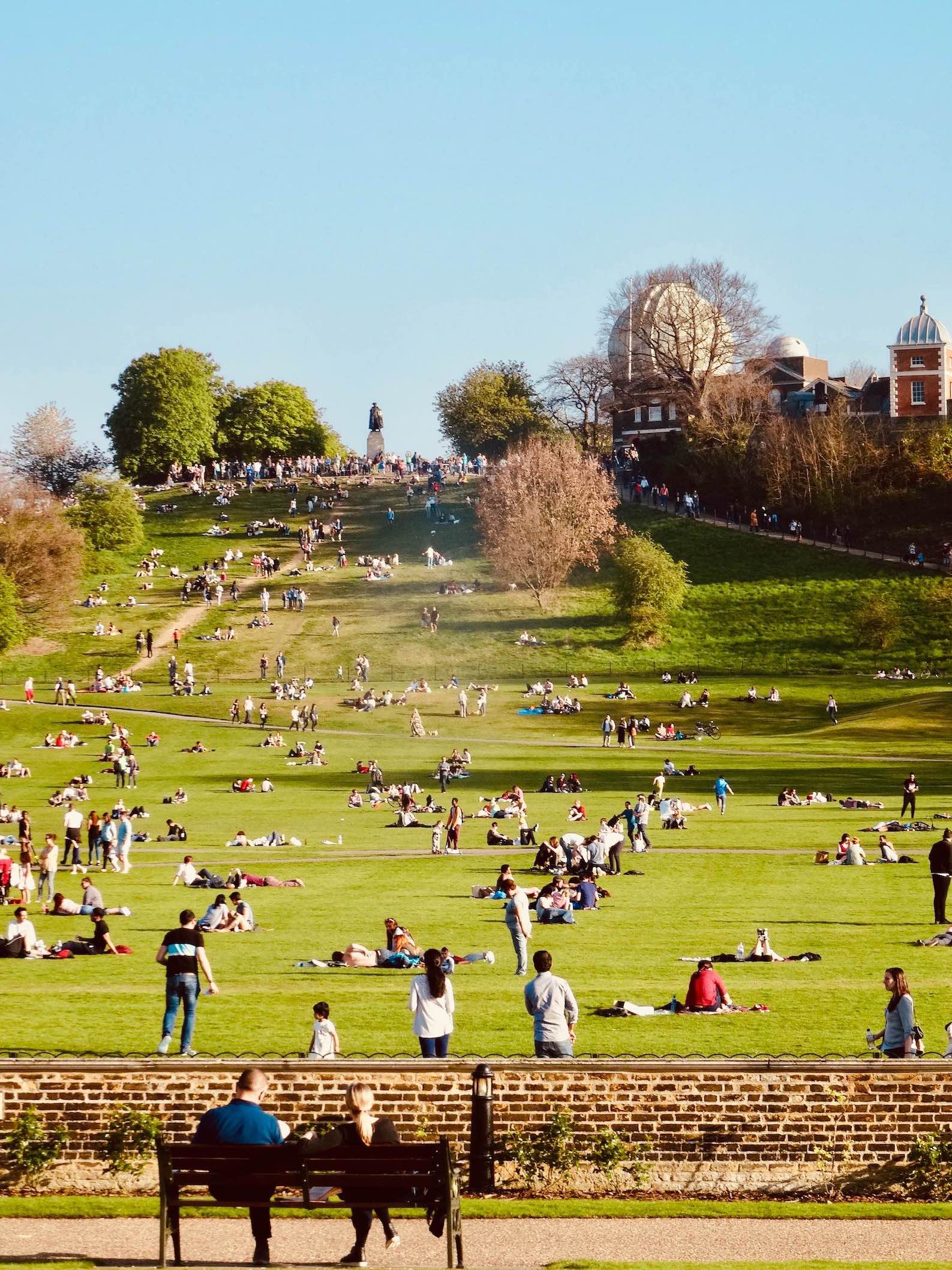 Her question was still very much on my mind after we parted. I can be a sensitive soul at times, so I found myself reflecting on how rude and misguided she’d been. As if her life, stuck behind the same desk every day, week in, week out, year after year, was somehow superior to mine.

I didn’t feel much like going back to Tooting Bec. Hence I went for a stroll, Greenwich being a delightful place for such an undertaking. Soon, I found myself at the entrance to Greenwich Park. Oh! Now here was a London park I’d yet to explore. No time like the present, I thought, ambling towards the foot of Greenwich Park’s steep slope. 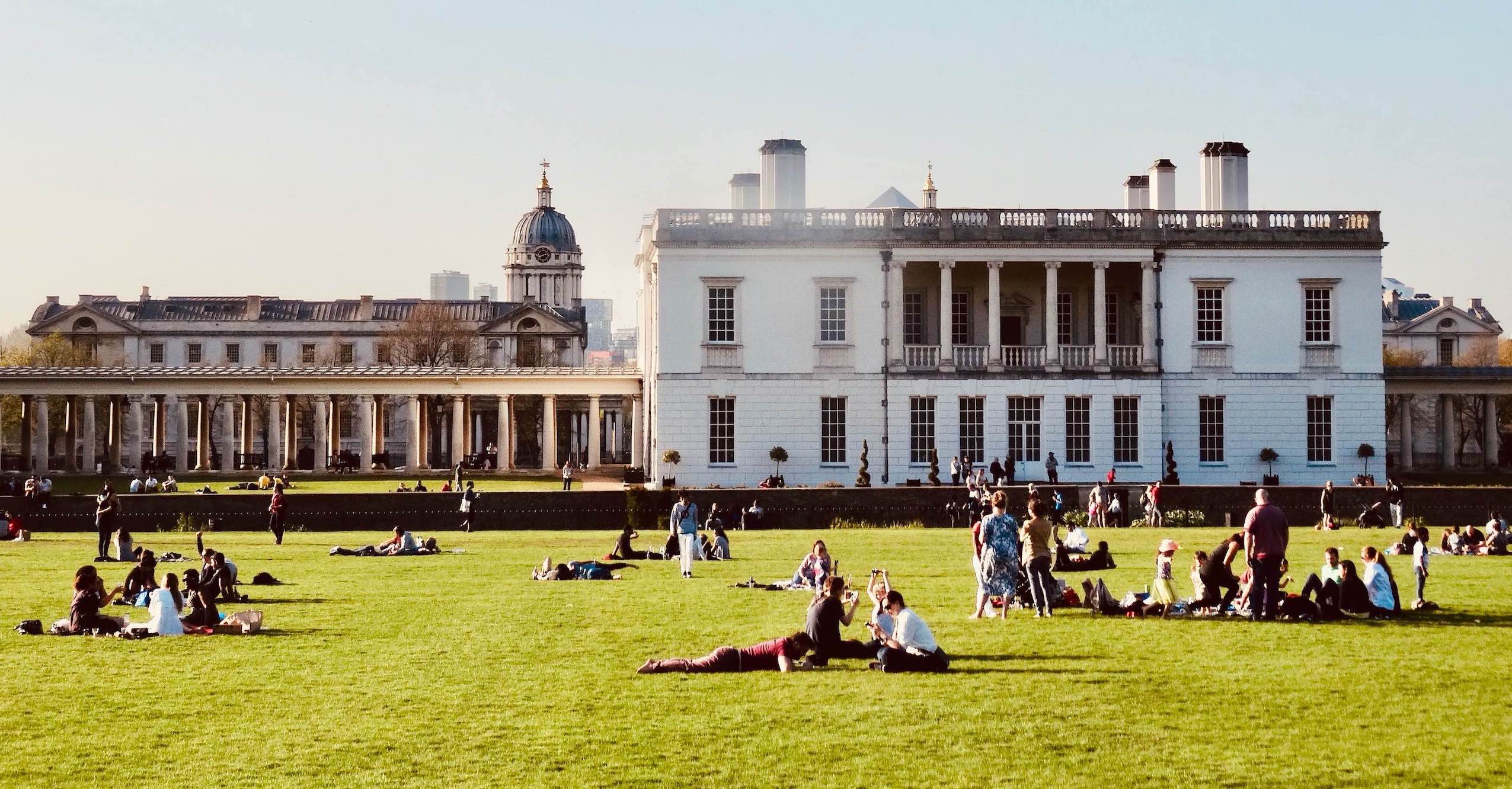 I quickly forgot about my friend and proper-job-gate. Indeed the grass felt pleasingly soft underfoot. And, after just a few minutes, I found myself pausing to turn and look back at Queen’s House. This former royal residence, completed in 1635, was initially built for Queen Anne of Denmark, wife of King James I. 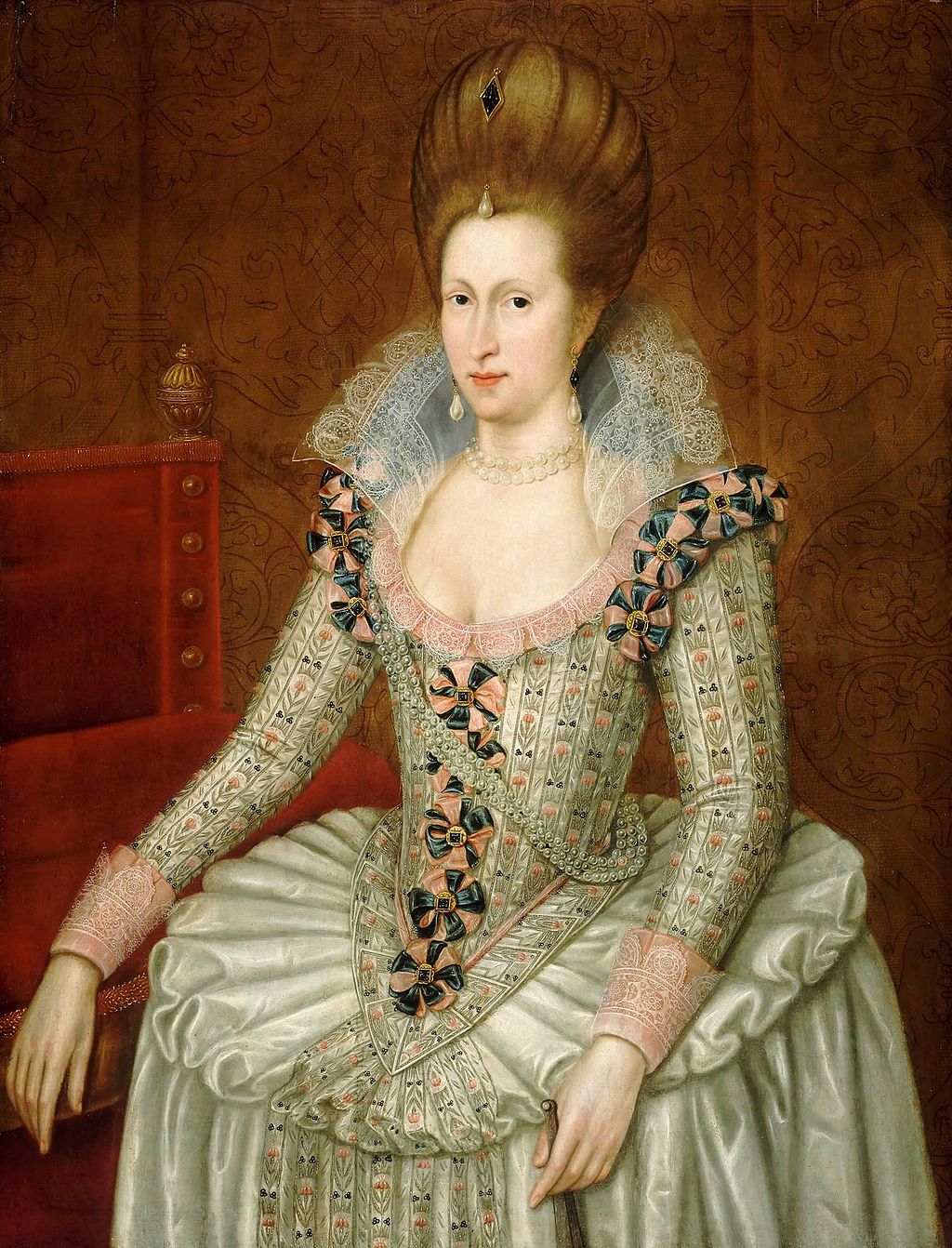 Queen Anne. NOT the Queen of Queen’s House.

Unfortunately, Anne died in 1618, two years into its construction. Eventually, it fell into the hands of the queen consort Henrietta Maria. A gift, it turned out, from King Charles I. There’s so much history to this place, but I’ll leave it for another article. You know, once I’ve actually been inside. 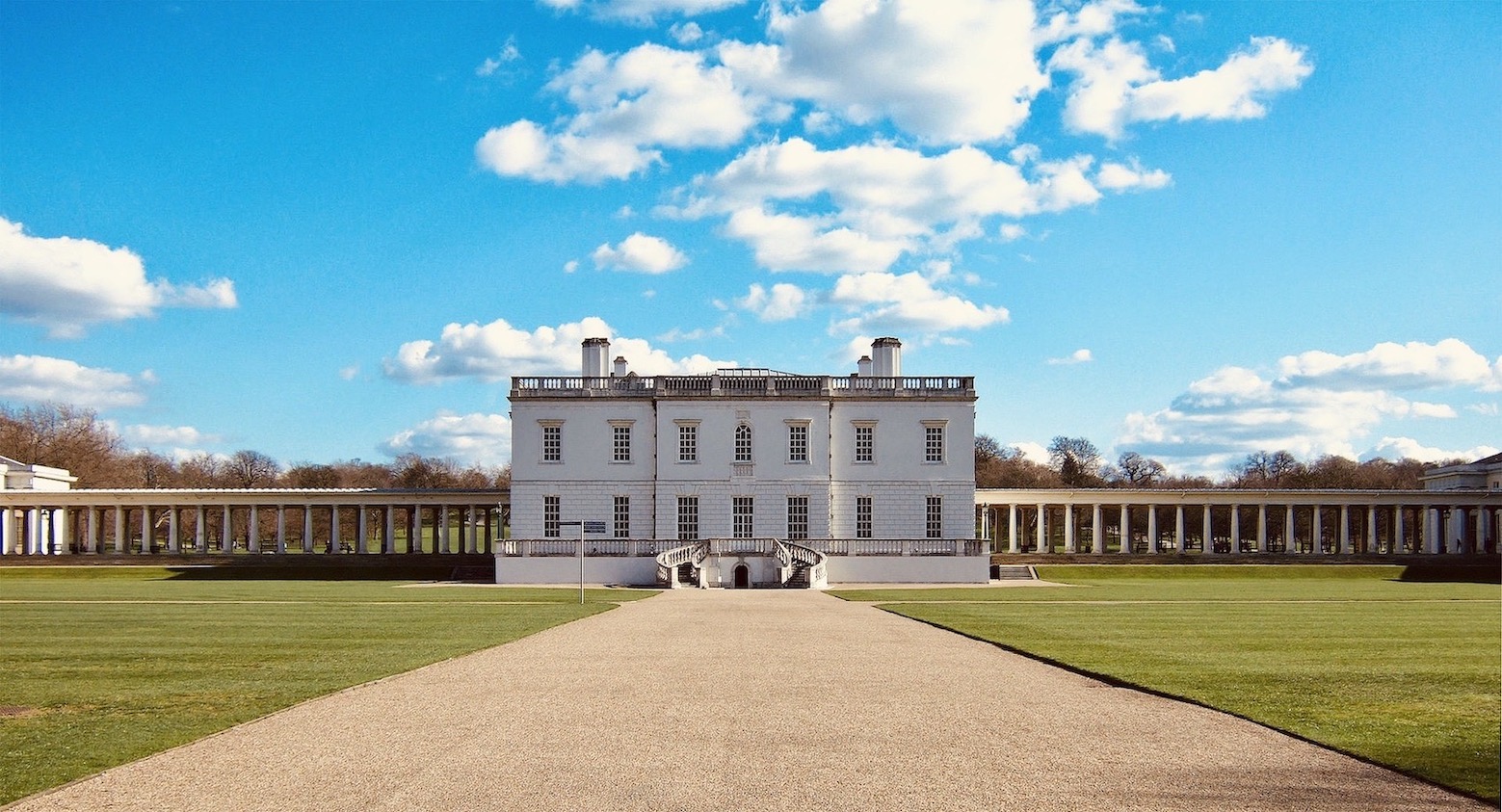 Rather, let me focus on the history of Greenwich Park itself, which now stands as one of London’s largest green spaces. This was one of England’s great royal parks and its first owner was a chap called Humphrey, the Duke of Gloucester. He received it from his nephew, King Henry VI in 1427. 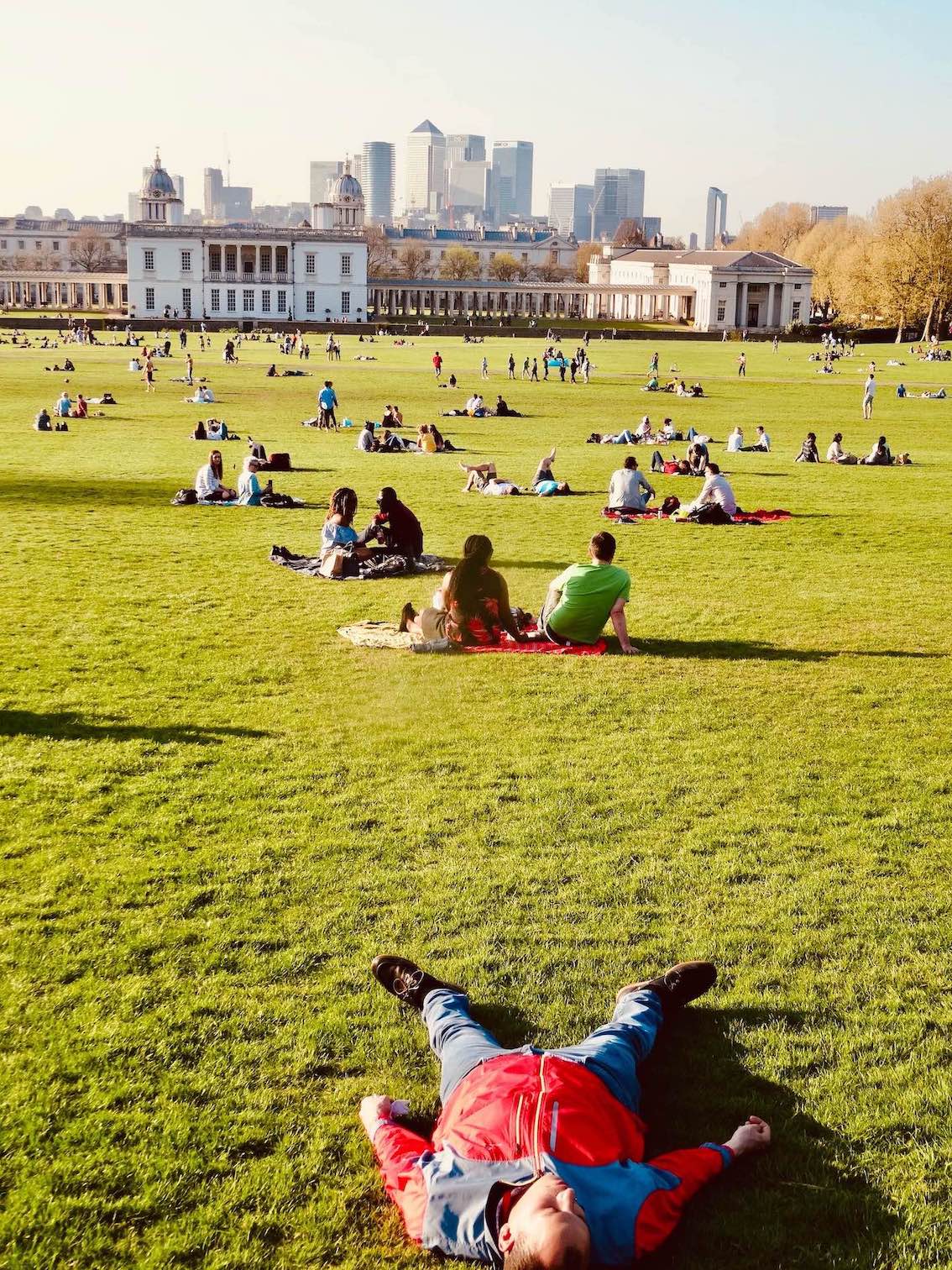 Humphrey sure wasn’t shy in putting his new land to good use. First, he built a private house on it, before work began on Duke Humphrey’s Tower, a hunting lodge later known as Greenwich Castle. Decades later Henry VIII took it over as a place to hang out with his mistresses. 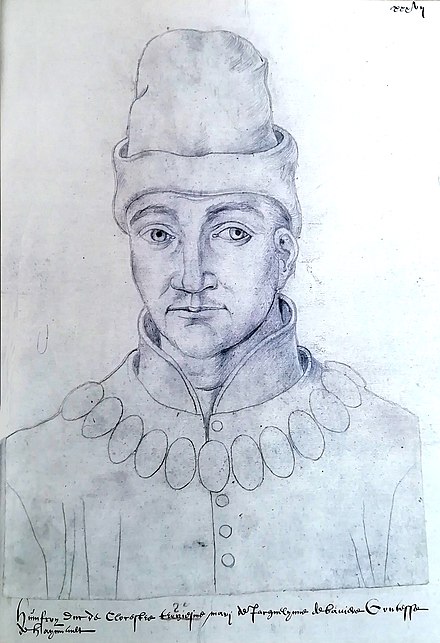 Sadly Greenwich Castle is no more. It fell into disrepair in the 1650s and by 1676 had been destroyed and replaced by The Royal Observatory. Which is the very building that came into view that afternoon as I slowly made my way up Greenwich Hill, aka Observatory Hill. 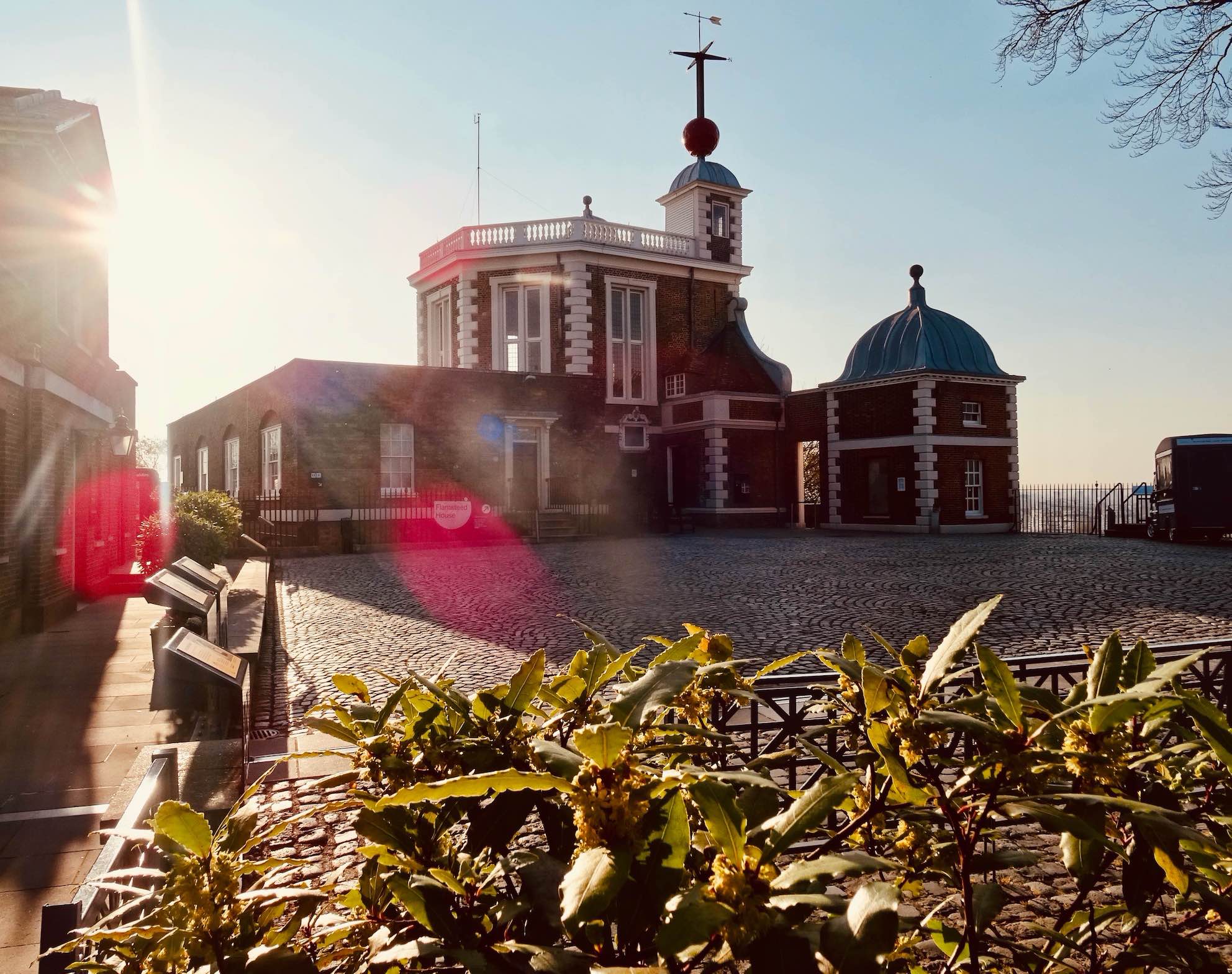 It was Charles II who ordered The Royal Observatory’s construction. How wonderful that the original section, Flamsteed House (pictured above) still stands in such excellent condition.

Designed by Sir Christopher Wren, the building takes its name from the Royal Astronomer John Flamsteed, whose passion and charms were key in persuading the king to create Britain’s very first purpose-built scientific research facility. 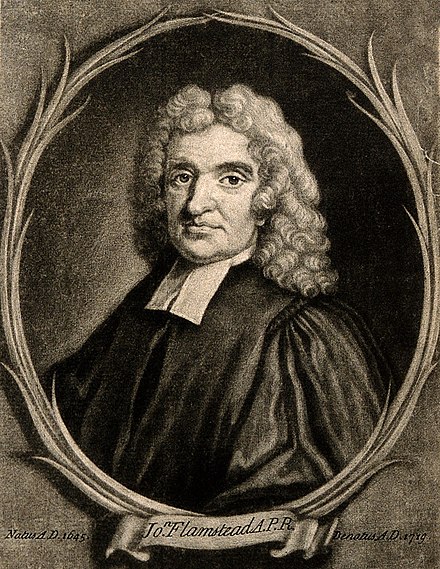 That afternoon, peeking through the iron gates from the park, I resolved to tour the observatory myself one day. To see The UK’s largest refracting telescope (28 inches) and marvel at a four and a half billion year old meteorite. Almost five years later and I still haven’t ticked it off. Maybe Sladja and I will get round to it in 2022. 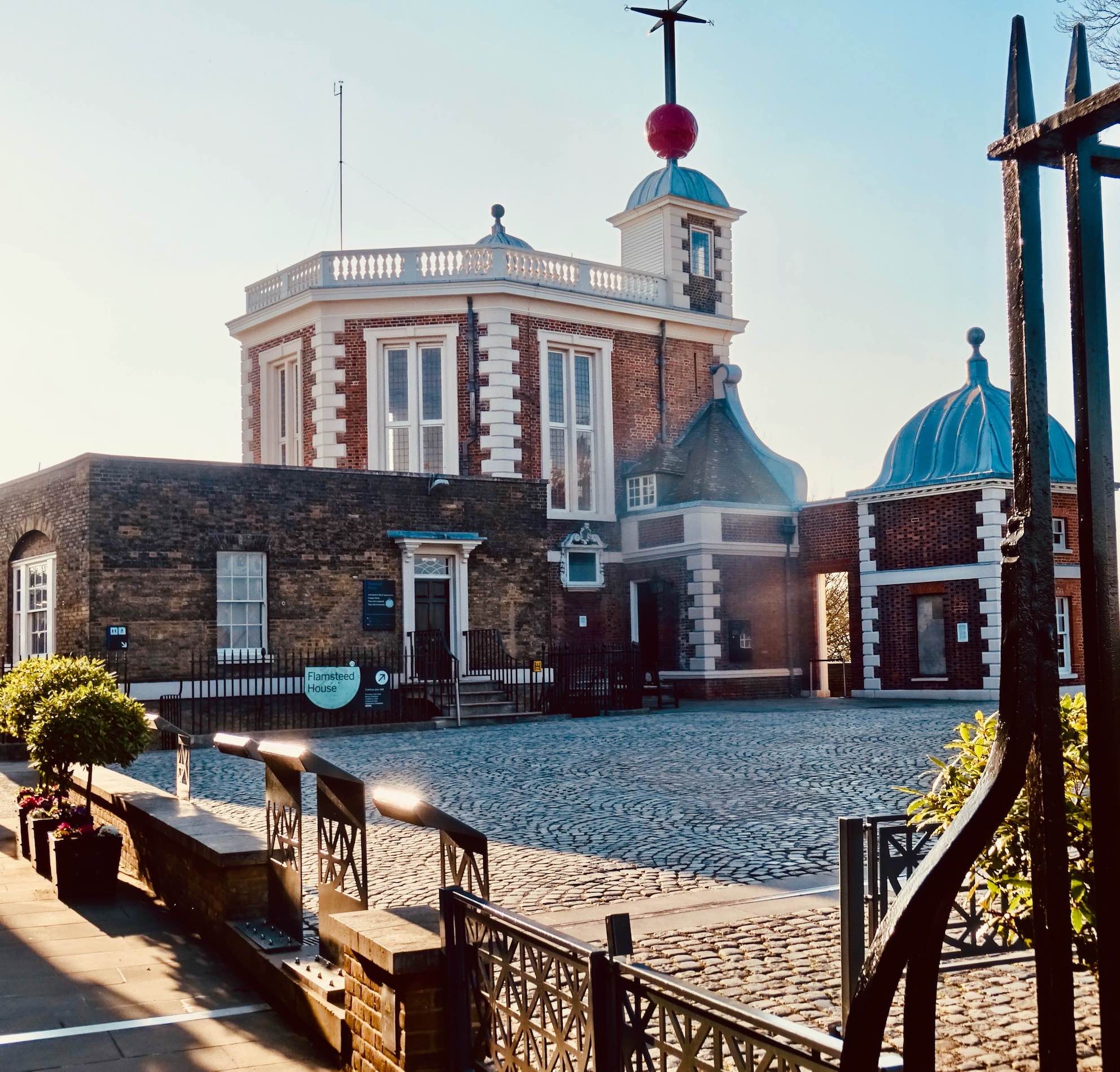 Another part of the observatory you can catch from the park is the fascinating Shepherd Gate Clock, outside the main gate. Created and installed by the engineer Charles Shepherd in 1852, this was the first public clock to display Greenwich Meantime (GMT). It’s a wonderful (not to mention highly unusual) antique that features a 24 hour analog dial. 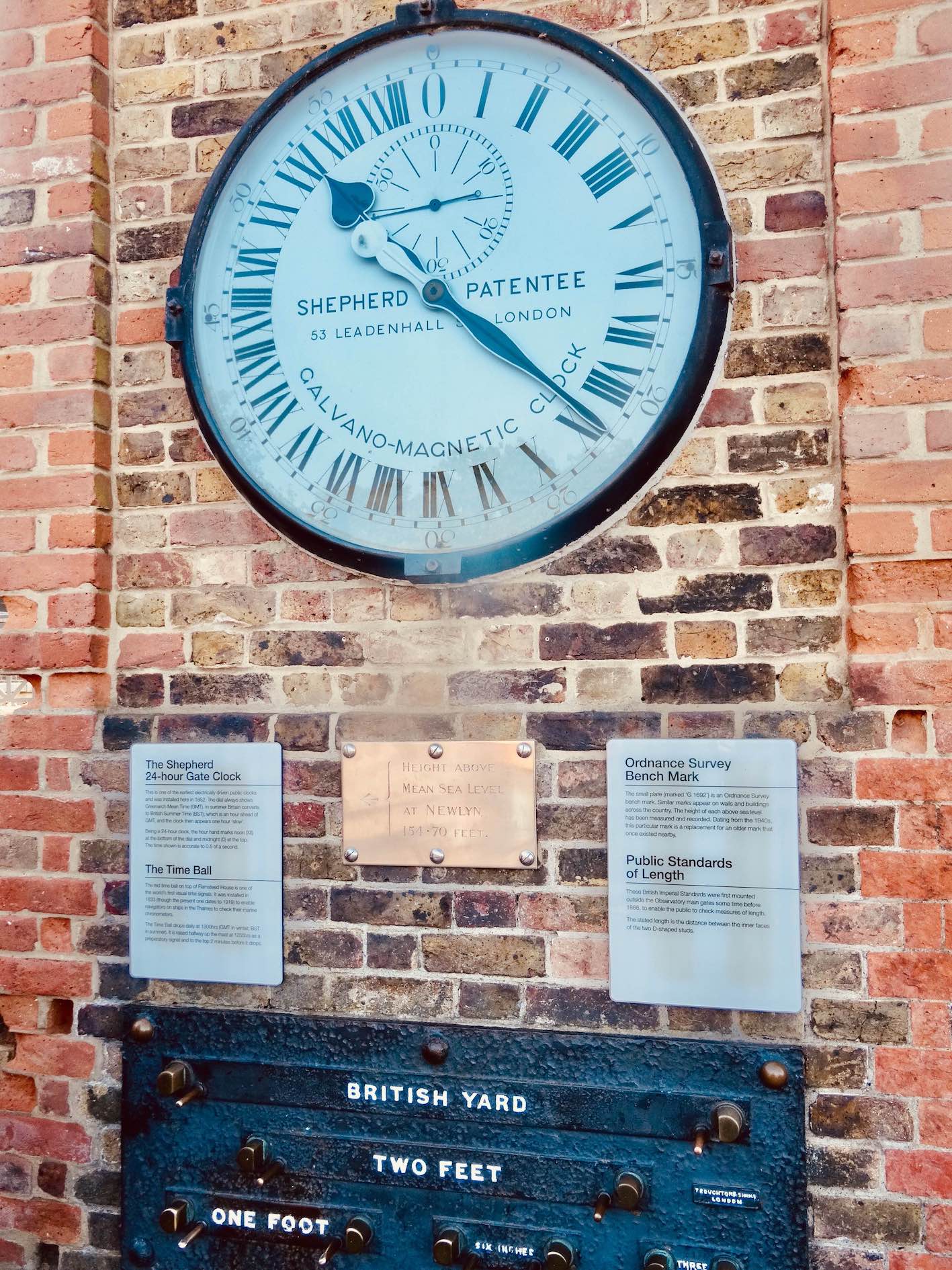 Moving on from the observatory, my somewhat aimless wanderings led me to the handsome Greenwich Park Bandstand. Erected in 1891, this grade II listed structure still hosts live music performances. Especially in the summer, when visitors can rest and enjoy a show among the rows of deckchairs laid out by the local council. 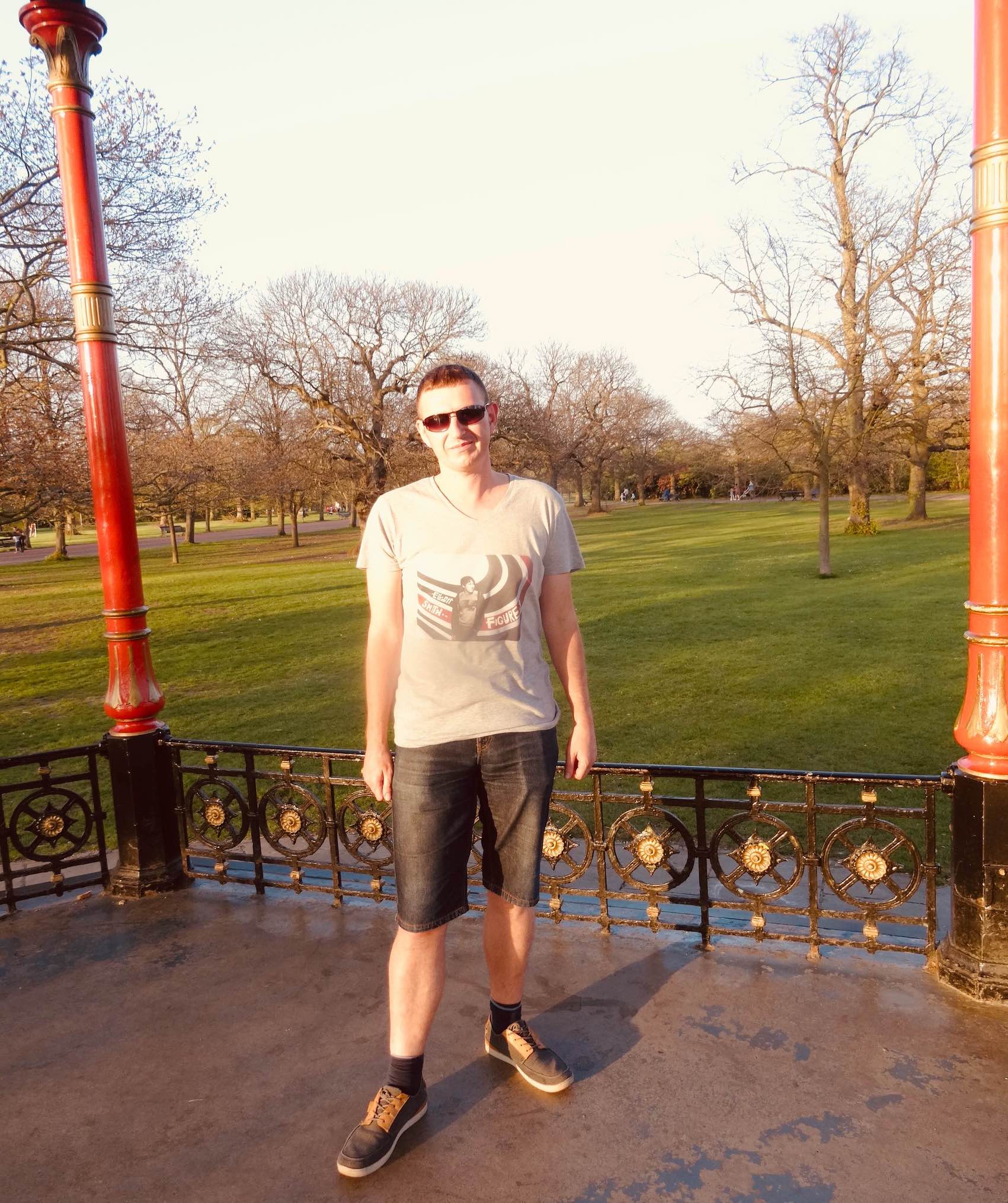 A wide range of wildlife has resided in the park over the centuries. Back in the Duke of Gloucester’s days, he and his royal chums kept and bred falcons in order to train them in the art of hawking. During Henry VIII’s reign, the royals used the park to hunt deer. As such, today’s park has a wild deer enclosure, sealed off from public access.

There are also hundreds of grey squirrels darting around. Happily these privileged beasts roam free, unmolested by bows, arrows and wild dogs. Moreover, they even get fed by locals and tourists. Despite all the signs telling you not to. 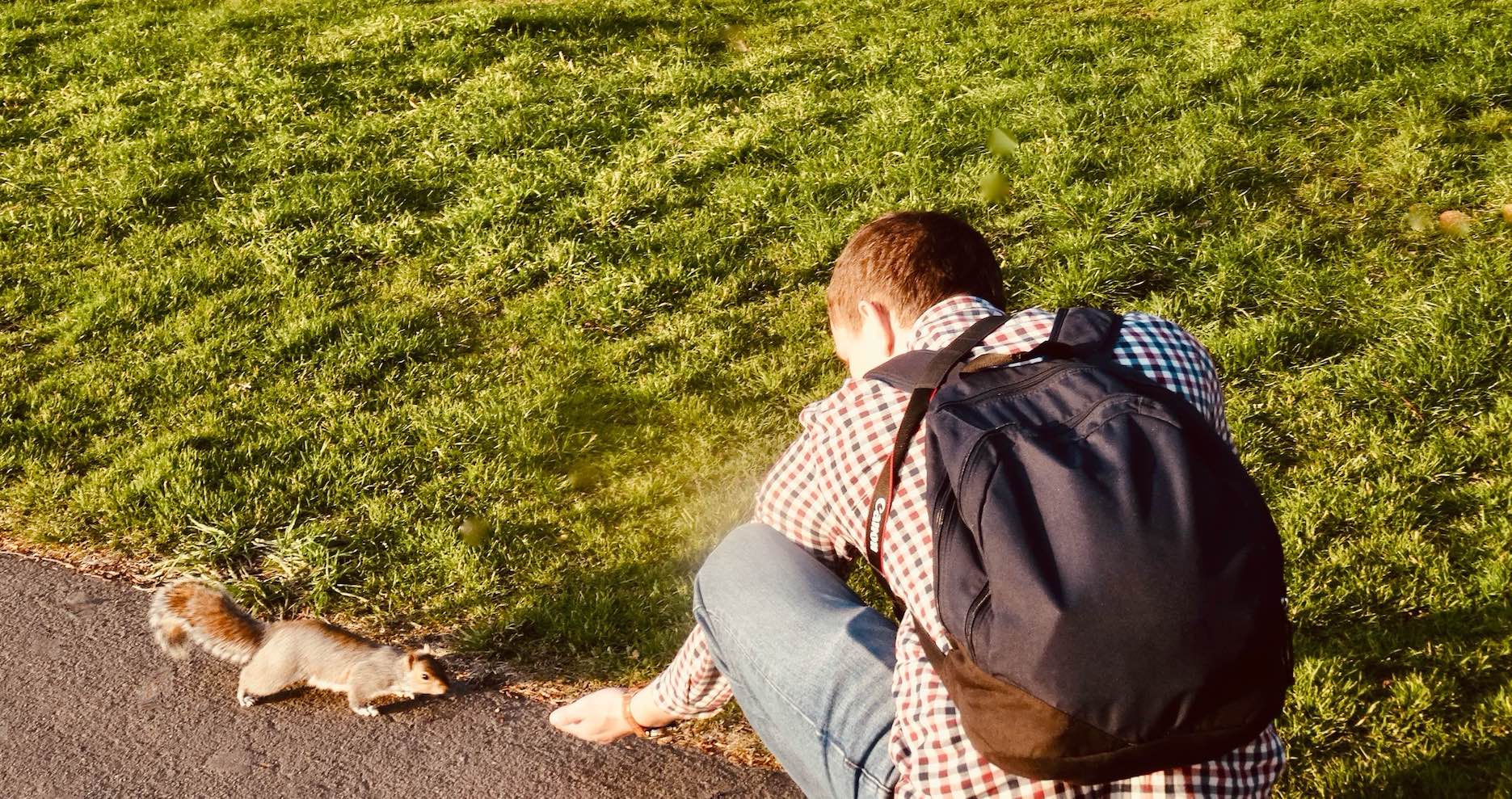 Next, I found myself picking a path under a gorgeous row of cherry blossoms. Bringing a taste of Japan to the English capital, a number of the trees lean beautifully into each other, forming an elegant Cherry Blossom Tunnel. A few, I’ve read, even arrived from Japan itself as a state gift. 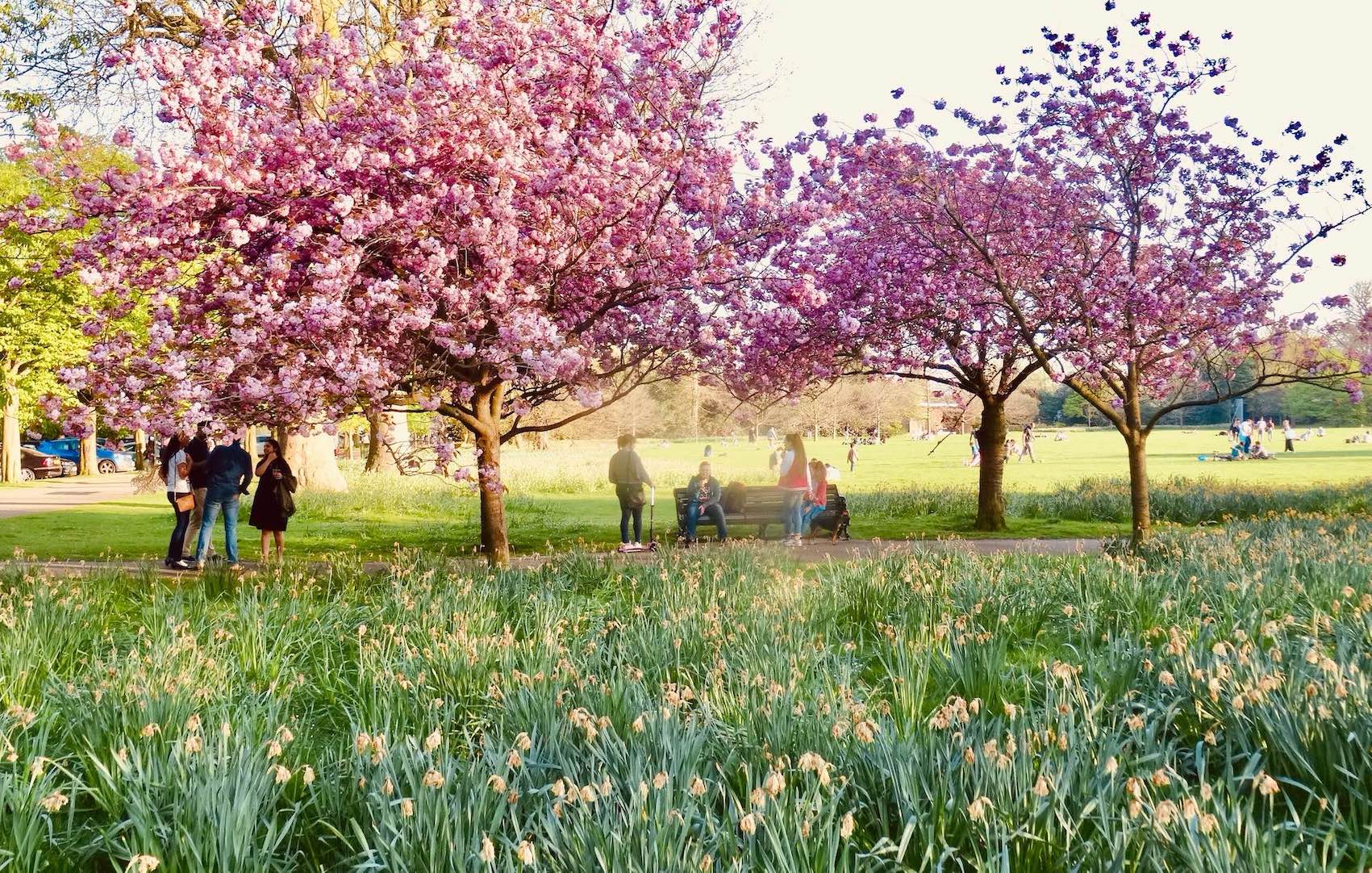 On the subject of trees, there are around 4000 in Greenwich Park. Among them stand over fifty 17th century sweet chestnuts, an old sycamore and a handful of magnificent ancient oaks. One of them, pictured below, was such a grand sight I actually stopped right in my tracks to photograph it. Then strode over to the great thing to stand for a moment under its vast shadow. 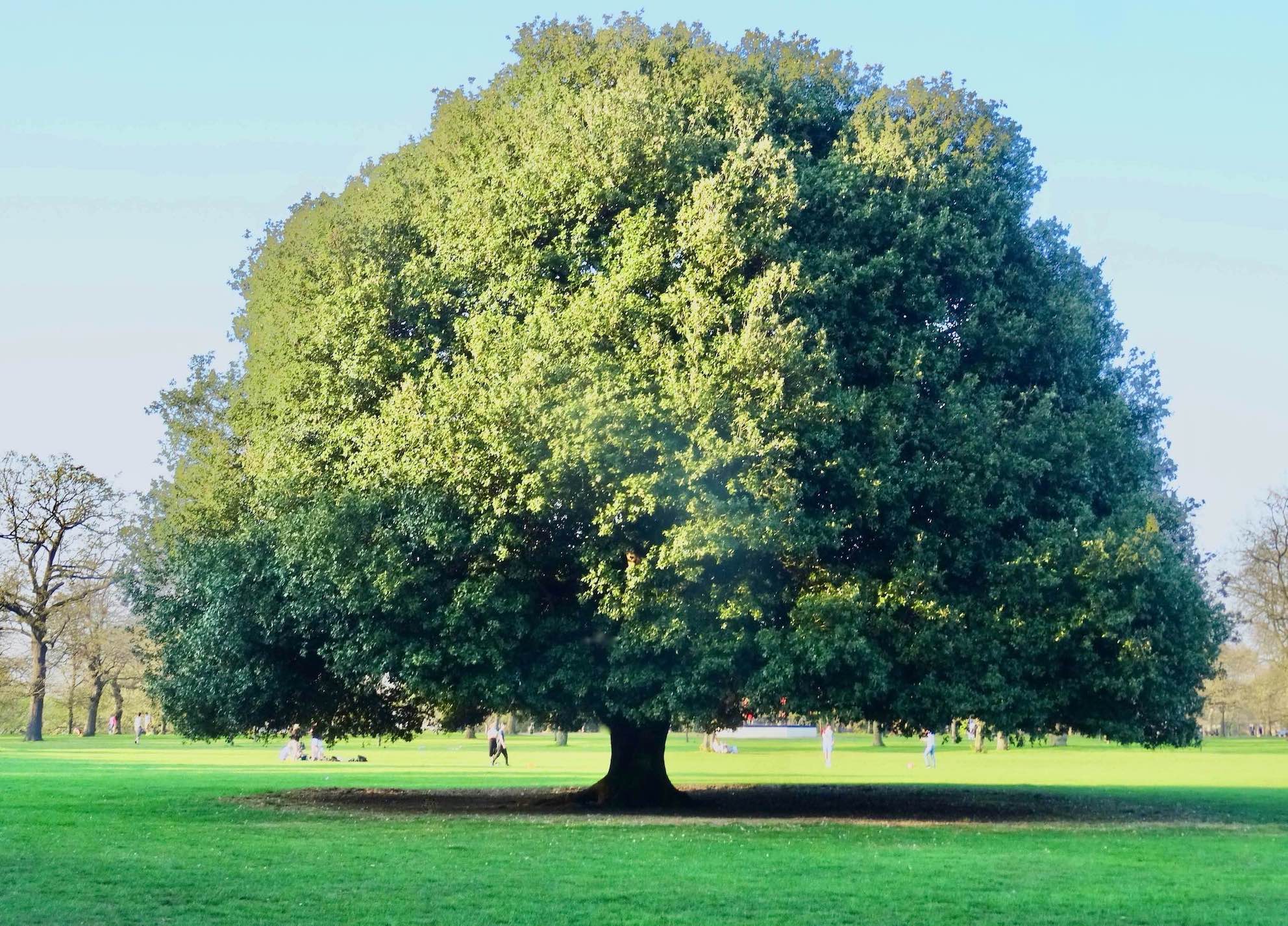 However, it’s actually the decrepit remains of an old oak that stands, or rather sits, as Greenwich Park’s most famous tree. They call it Queen Elizabeth’s Oak, a veteran tree seeded in the 12th century. According to historians, it most likely stood in the garden of Placentia Palace, home to the Tudor royal family. 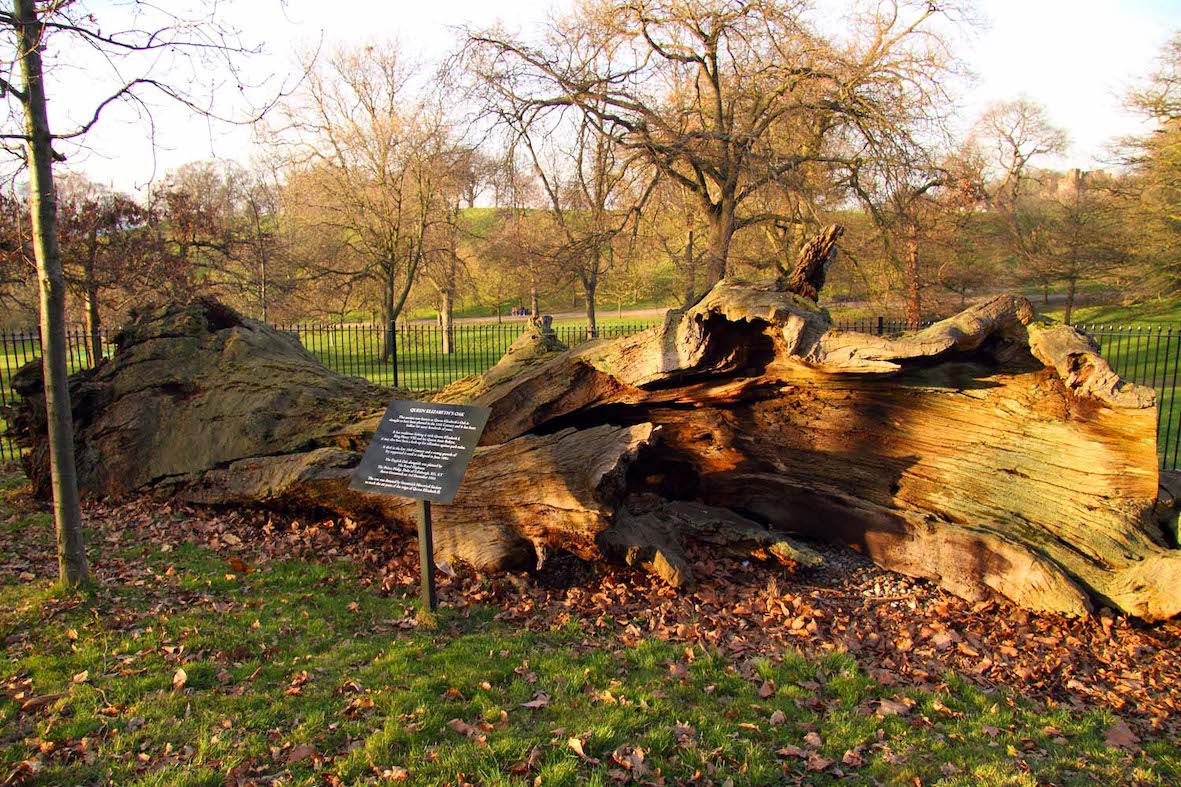 They also reckon Henry VIII named the tree after his daughter, Elizabeth I. And that she often picnicked under the oak in the summer. The tree died at some point in the 19th century, but didn’t collapse until 1991 during a fierce storm. It remains right where it fell, protected from inquisitive hands by a surrounding fence. 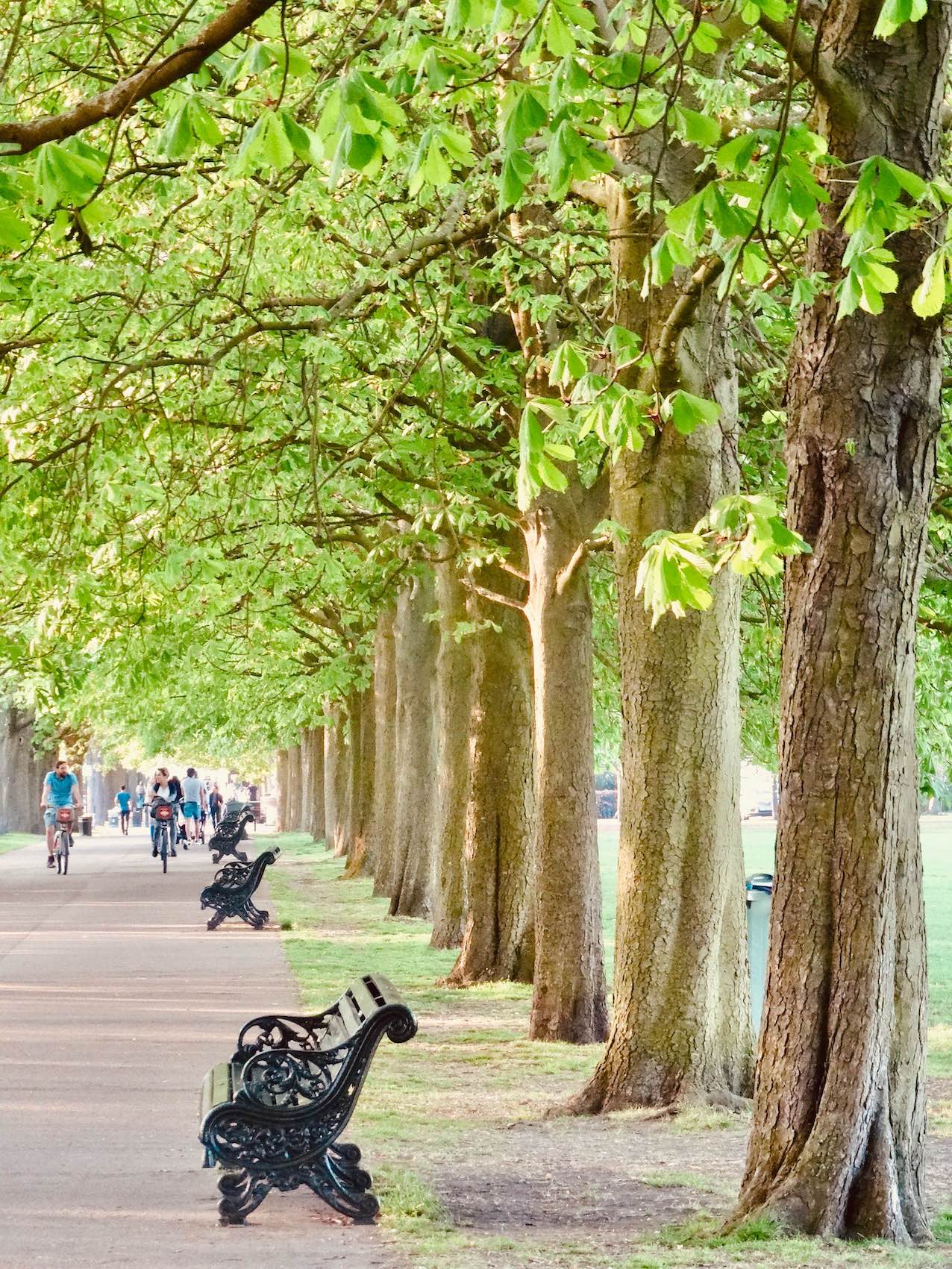 Right at the top of the hill, looking down over the expanse of the park, across Queen’s House and beyond, sits a large stone square. It is home to a grand monument in honour of Major-general James Wolfe. 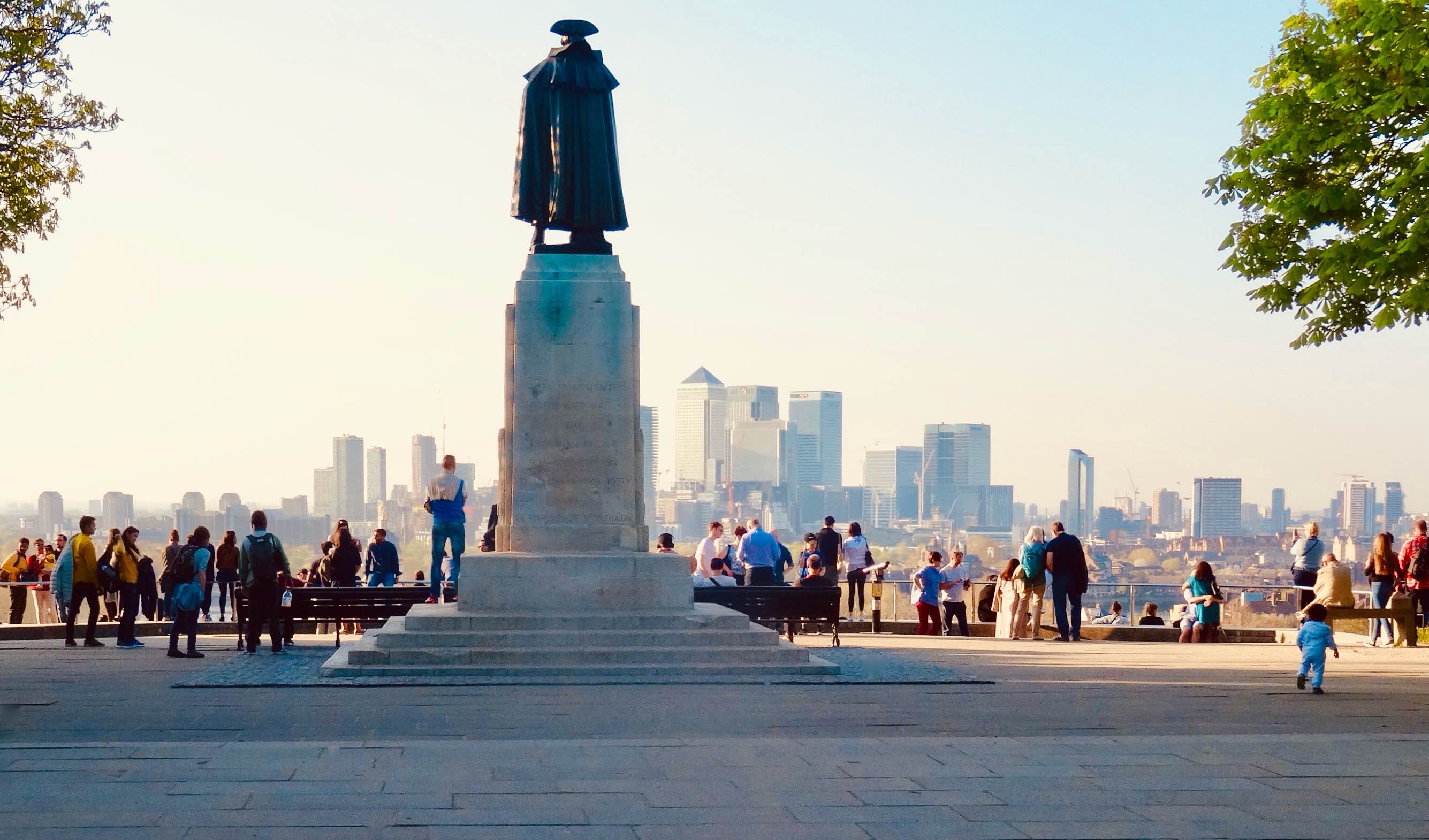 The statue, unveiled in 1930, commemorates Wolfe’s victory against the French at Quebec in The Battle of the Plains of Abraham. Winning the battle secured Canada for the British, but cost Wolfe his life. As the story goes, he was hit with three gunshot wounds early on in the fighting. And that was that. 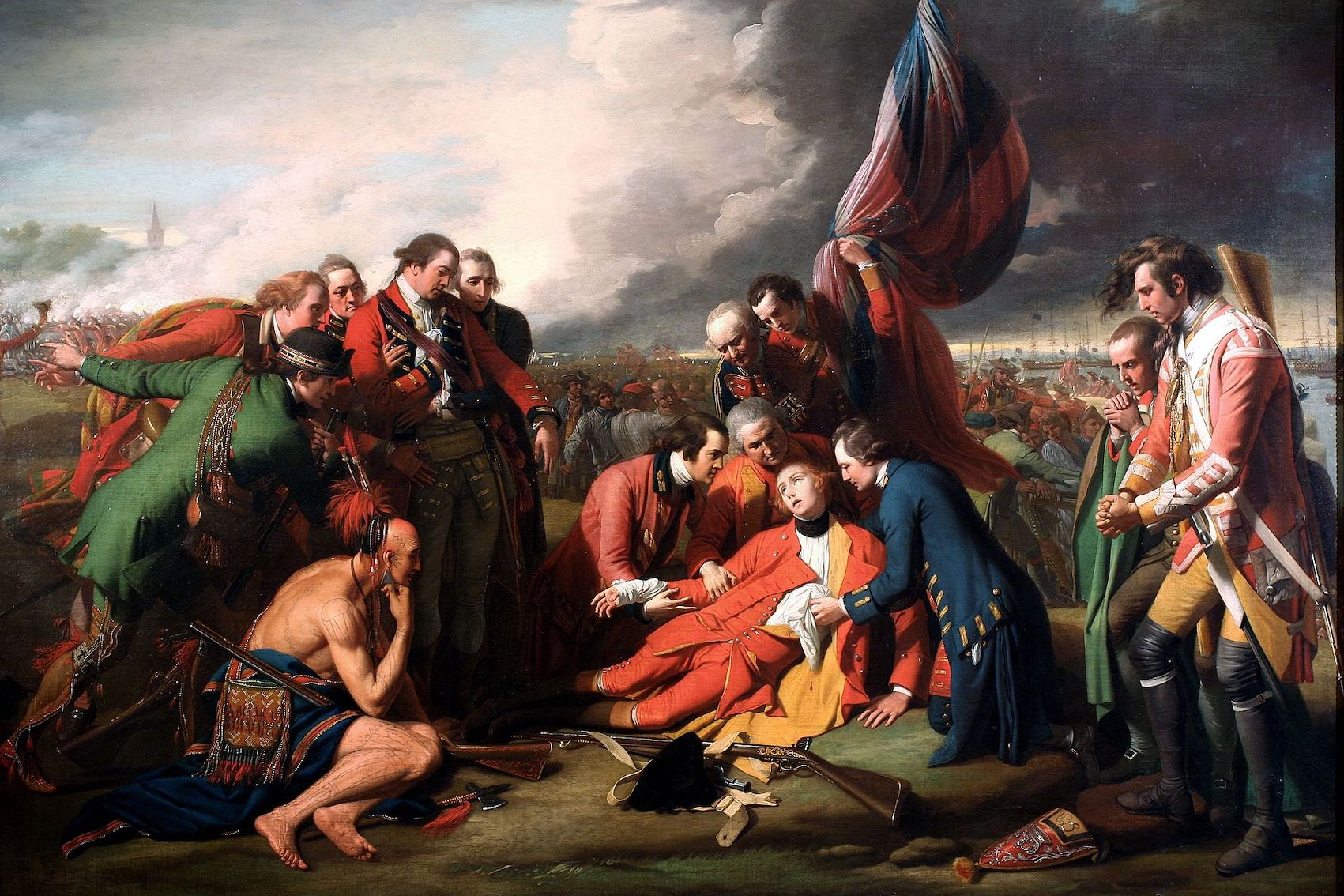 The Death of General Wolfe. A painting by Benjamin West (1770).

Wolfe lies buried in Greenwich at the nearby St Alfege Church. “A British hero”, claims the plaque that accompanies the monument. A man with a proper job, I suspect, in the eyes of my friend. 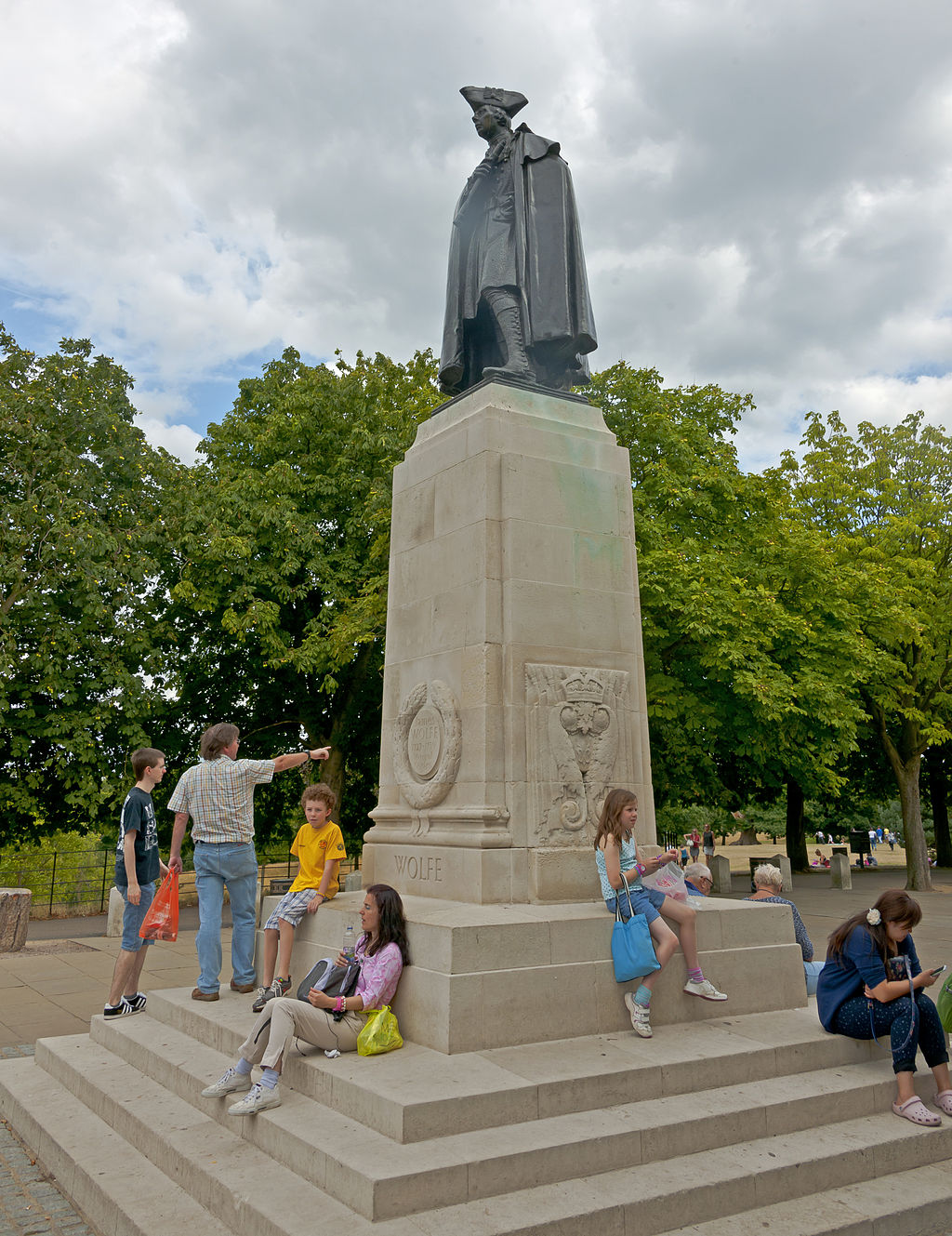 I remember standing up there for a while looking out over London. The home I was about to leave once again for more foreign adventures. It would be another two years before I came back, though I didn’t know it then. Gathering myself, I let out a deep breath and made my way back down the hill towards the future. 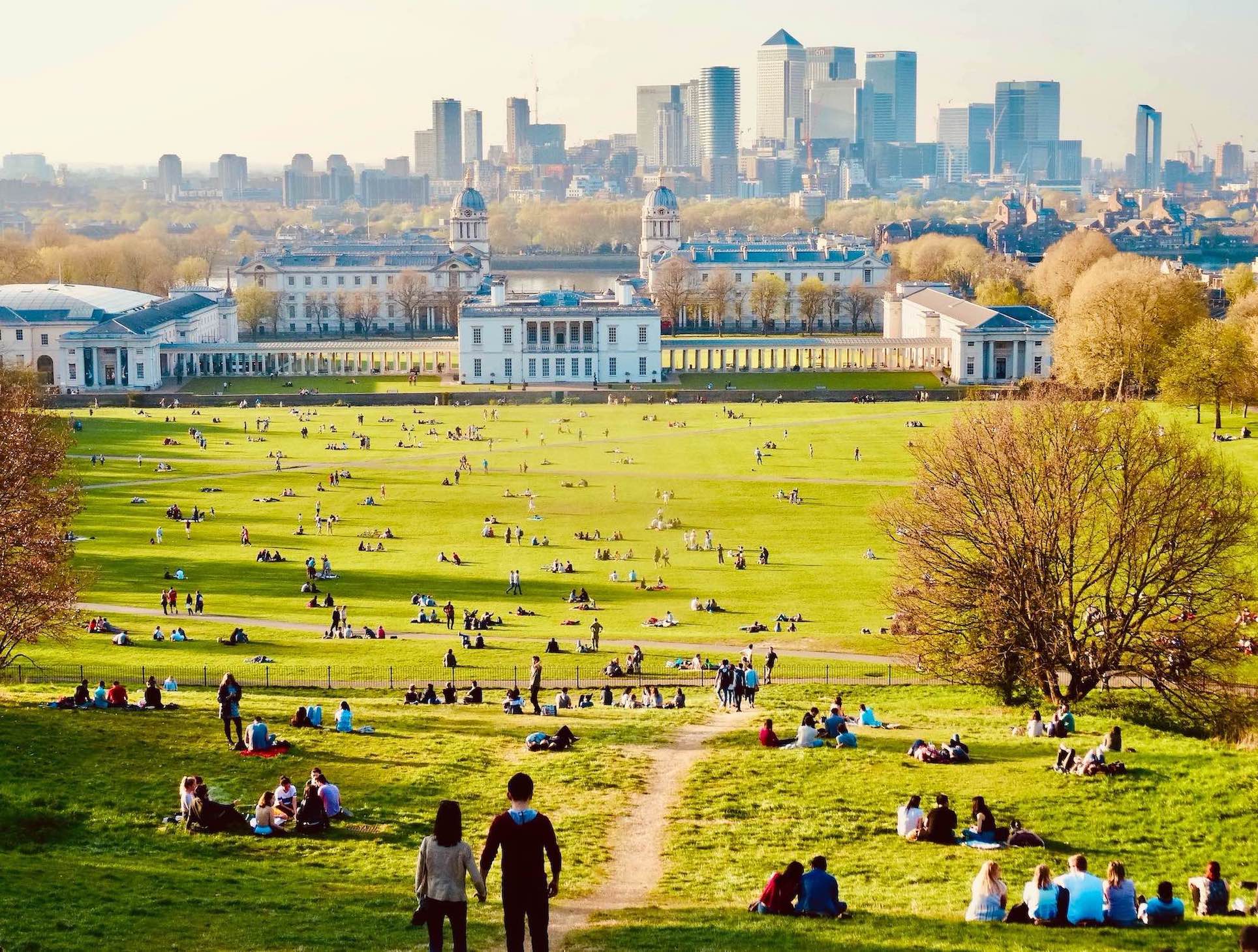